Charles And Diana: A Look Back At The ‘Wedding Of The Century’

The wedding of then-Prince Charles and Lady Diana Spencer was one of the most extravagant in royal history. Deemed the “wedding of the century” by the press, all eyes were on London as the pair exchanged vows and were united in holy matrimony. Here’s a look back at the glitz and glamour from the day.

Charles and Diana first met in 1977 when he was seeing her sister, Lady Sarah. They started dating a few years later in what many saw as a whirlwind romance. However, according to Diana, the pair had only met 13 times when Charles dropped down on one knee and proposed. They publicly announced the news on February 24, 1981. 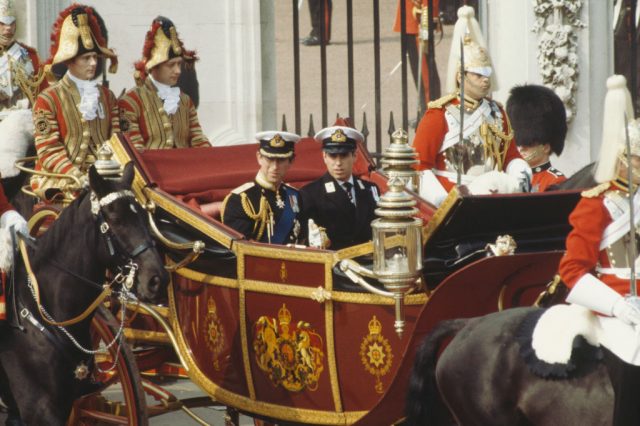 Diana’s engagement ring was made of white gold and contained a 12-karat sapphire stone surrounded by 14 solitaire diamonds. It was from the House of Garrard jewelry collection, instead of custom made, and is estimated to have cost $40,000. 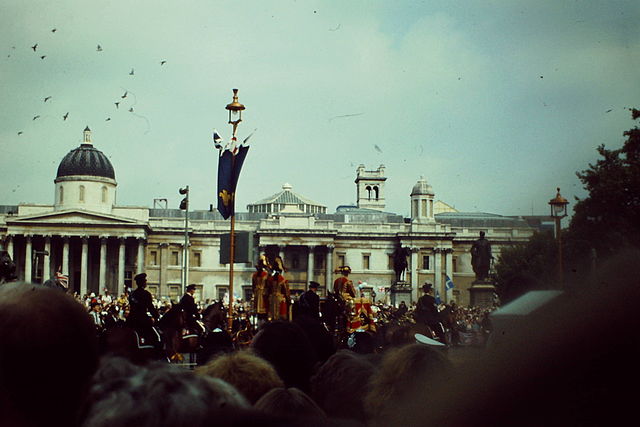 The wedding occurred on July 29, 1981. In the lead-up, the royal family held various celebrations. Two nights before, a gala ball was hosted at Buckingham Palace, while Queen Elizabeth II held a dinner for heads of state and government the following night.

One of the most iconic symbols from the pair’s nuptials is Diana’s wedding dress. It was designed by David and Elizabeth Emanuel, and was one of a kind. The garment, which showcased the popular early-1980s style, was shrouded in secrecy in the months leading up to the wedding. 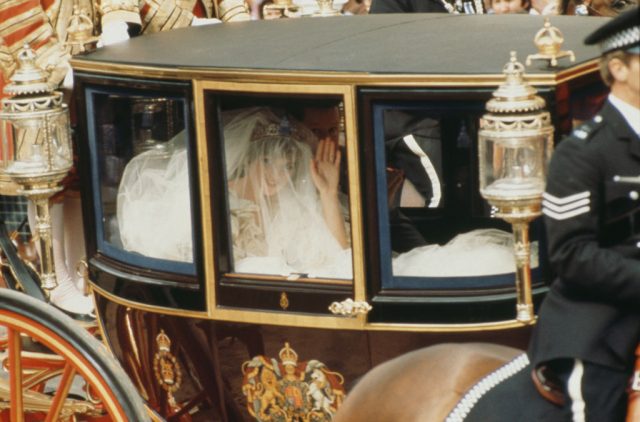 The intricate ivory taffeta gown featured an embroidered and fitted bodice of sequins and panels of antique Carrickmacross lace, which dated back to Queen Mary. It was covered in 10,000 pearls, and its 25-foot train was the longest in royal history.

According to Elizabeth Emanuel, she and David sewed a secret 18-karat golden horseshoe studded with white diamonds into the gown’s label for good luck. Diana was completely unaware of this until the day of the wedding, and is said to have appreciated the gesture. 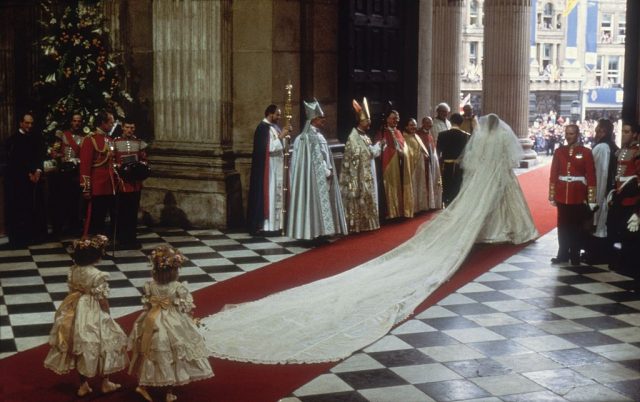 Diana also wore a 153-yard veil, an 18th-century heirloom tiara, and silk shoes embroidered with 132 pearls and 542 sequins and the initials “C” and “D” hand-painted on the arches. The Queen also ensured she had a special bouquet to carry. 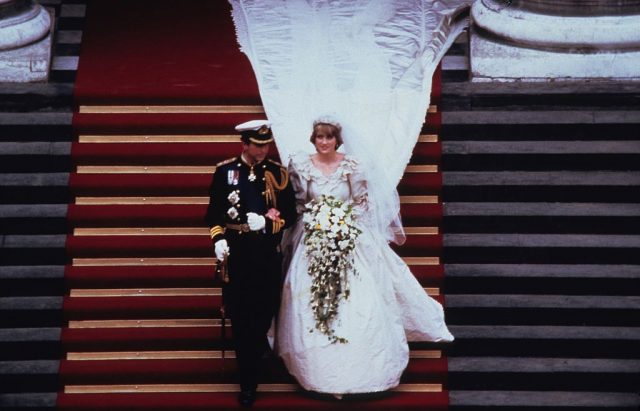 Prince Charles wore his full naval commander uniform, with the Queen’s Silver Jubilee medal, the stars of the orders of the Garter and the Thistle, and the royal cipher of the Prince of Wales on both shoulders. He also carried a dress sword tasseled in gold.

The wedding took place at St. Paul’s Cathedral in London, as opposed to the more traditional venue of Westminster Abbey. Not only did the cathedral allow for more guests to attend, it also ensured a longer procession through the city. 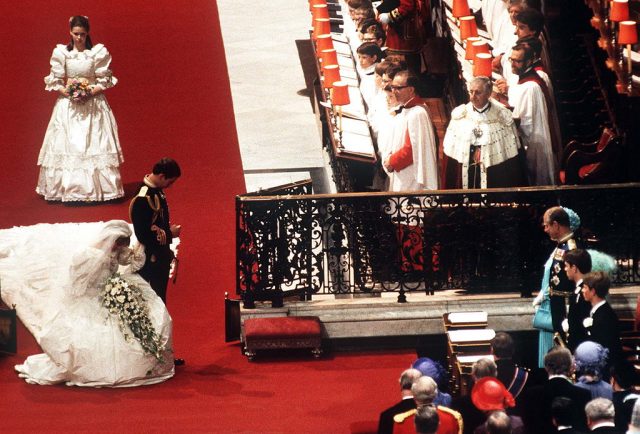 Diana drew up to St. Paul’s with her father in the Glass Coach. It was a traditional Church of England service, presided over by Alan Webster, the dean of St. Paul’s, and the archbishop of Canterbury, Robert Runcie. Three orchestras and choirs and a fanfare ensemble provided music, and members of the royal family served in the wedding party. 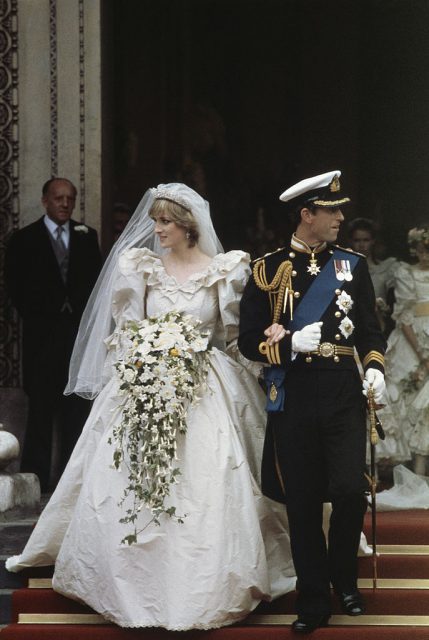 An astonishing 3,500 people were seated in St. Paul’s, including Nancy Reagan, Grace Kelly, and members of the royal family. Outside, the streets of London were crowded with 600,000 people trying to catch a look at the soon-to-be Princess of Wales, while another 750 million in 74 countries watched the wedding live on television. 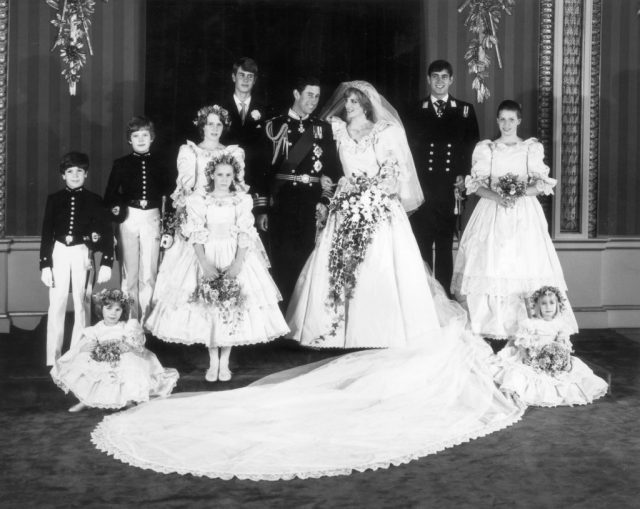 Diana and Charles broke from tradition with their vows, with Diana omitting the word “obey” after opting to follow what modern British couples were doing. Both were visibly nervous during the big day. Diana accidentally called her husband “Philip Charles Arthur George” (rather than Charles Philip), and Charles said “thy goods,” instead of “thy worldly goods.” 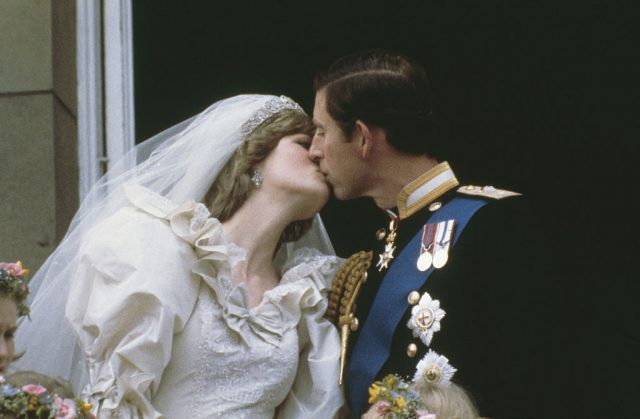 The couple exchanged rings made from Welsh gold from the Clogau St David’s mine in Bontddu. During the ceremony, Charles forgot to kiss his new wife, which he made up for when the newlyweds stepped onto the balcony of Buckingham Palace.

While the wedding featured 3,500 guests, the dinner that followed was attended by only 120. The bride and groom were treated to an exquisite dinner which included brill in lobster sauce, cream on corn, and strawberries with clotted cream. 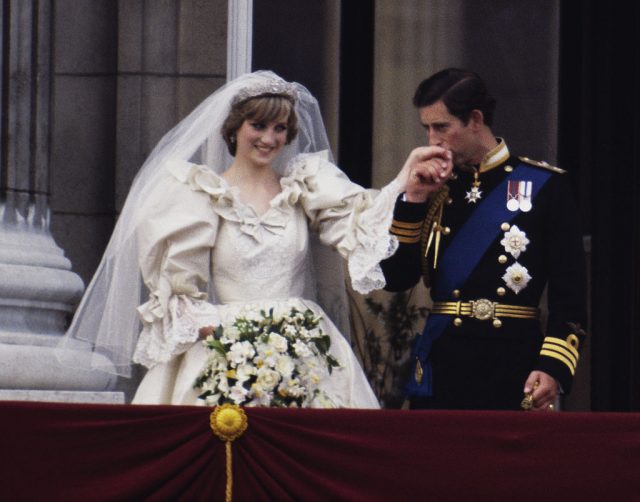 While most weddings have just one cake, Charles and Diana had 27. The official cake was baked by David Avery, head baker at the Royal Navy’s cooking school. It weighed in at over 200 pounds and, standing at five feet tall, was a decadent fruitcake with tiers separated by Corinthian Roman columns. It was decorated with flowers, the couple’s initials, and the royal family’s coat of arms. 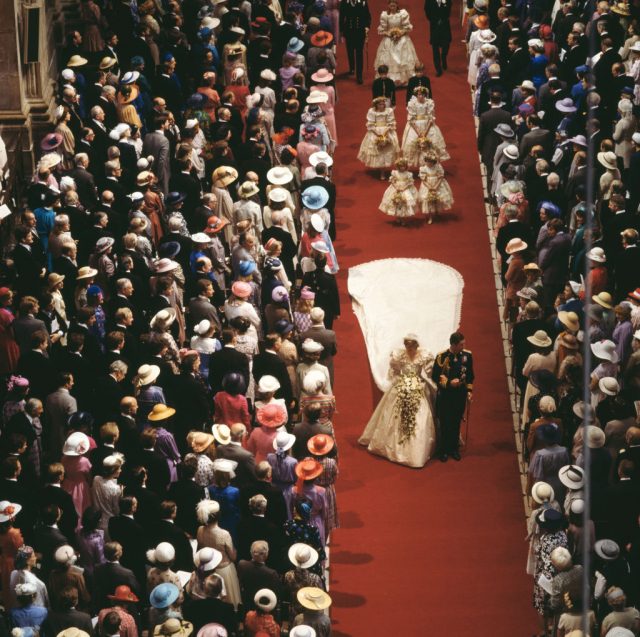 Many British citizens held parties to celebrate the nuptials. On the night of the wedding, a fireworks display was set off in Hyde Park and 100 beacons were lit across the country.

Unfortunately, the happiness of the wedding day didn’t remain, despite the pair having two sons, Princes William and Harry. Charles (now King Charles III) remained in love with his former partner, Camilla, who was titled the Duchess of Cornwall before ultimately becoming the Queen Consort.

In 1986, Charles decided the marriage between him and Diana had “irretrievably broken down” and began an affair with his old flame. 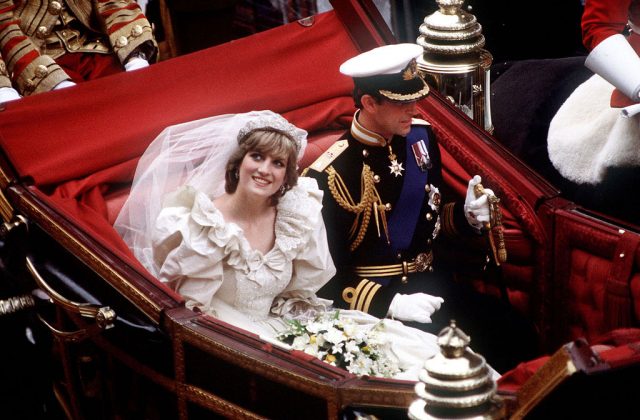 More from us: Princess Diana, modern royal style icon, would not wear Chanel pumps after her divorce for a private reason

The pair separated in 1992 after word of their dissolving marriage became public, and they divorced in 1996. In a conversation with friends, Diana even revealed the wedding was the “worst day” of her life.

One year after the divorce, the Princess of Wales tragically died at the age of 36 after sustaining injuries during a car accident in Paris. Her death, the result of her driver trying to flee the paparazzi, sparked public mourning and was the subject of global attention.