9 of Our Favorite Cartoon Characters, Pictured Then and Now

Growing up, the cartoons we know and love weren’t considered ‘classics’ yet. But now, they go down in history as having laid the groundwork for the incredible animated shows and movies available today. But that doesn’t mean these old guys can’t keep up. Instead, they’ve just had a few touch-ups here and there to help them keep up with the Jones! It is easy to forget what they originally looked like, but wow was it ever different! 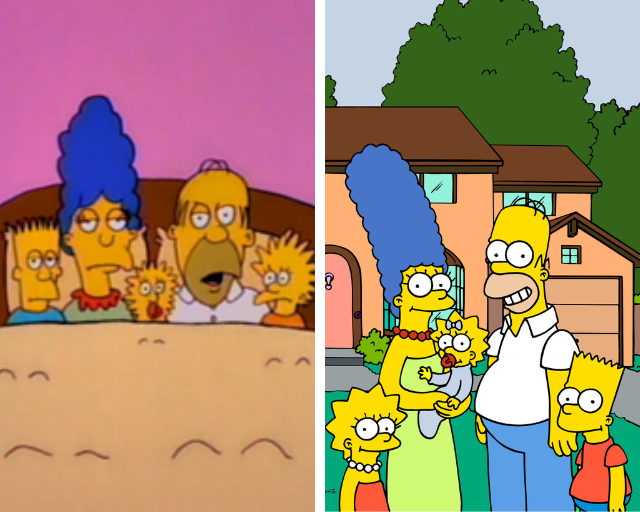 Although it began in 1978 as a cartoon short by Matt Groening on the Tracey Ullman Show, The Simpsons steadily grew in popularity for the Fox Broadcasting company until it eventually became its own television show that’s now been running for over 40 years. Its animation style has changed dramatically, with the features of the characters becoming more round than sharp, and all-around a little easier on the eyes. 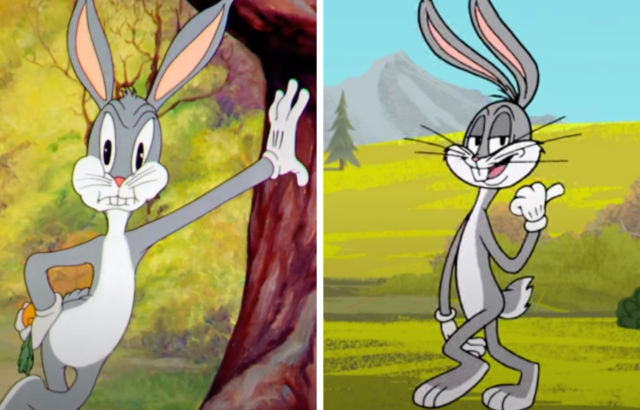 Bugs Bunny was created as part of the Looney Tunes animated short film series and was seen on screen sporadically until he made his real debut in A Wild Hare in 1940. He quickly became one of the most popular characters in the series, and has been reimagined many times. Regardless of any animation improvements, Bugs can always be seen with big ears, gloves, and large feet. 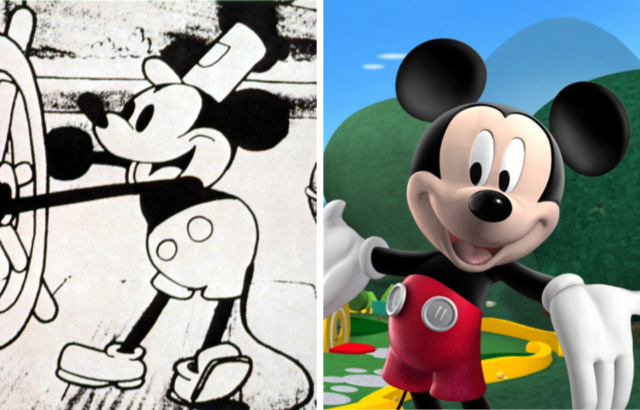 Arguably the most popular cartoon character in the world, Mickey Mouse has undergone a major transformation since his early days in the ’20s. Originally voiced by Walt Disney himself, Mickey Mouse has been reimagined time and time again, and his voice has become a classic for impersonators. But no matter what kind of changes are made in the world of animation, you can always spot Mickey Mouse with his red shorts, white gloves, and friendly smile. 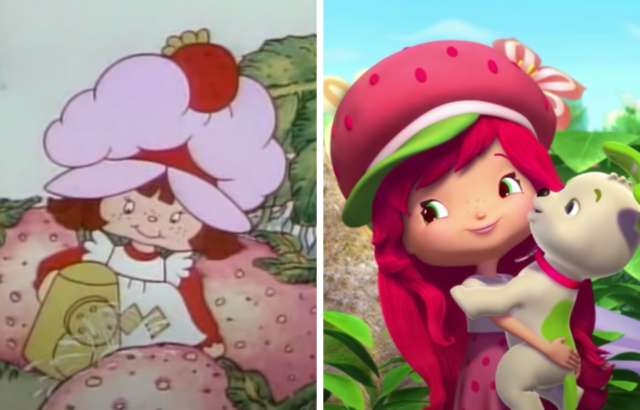 Once a character for greeting cards, Strawberry Shortcake quickly became a popular doll for little girls, and even got her own television show in the 1980s. Back then, she lived in a shortcake home, but nowadays she resides in a giant strawberry. She seems to get older with each new series that is made, but she is always seen solving problems, learning new things, and being kind to friends. 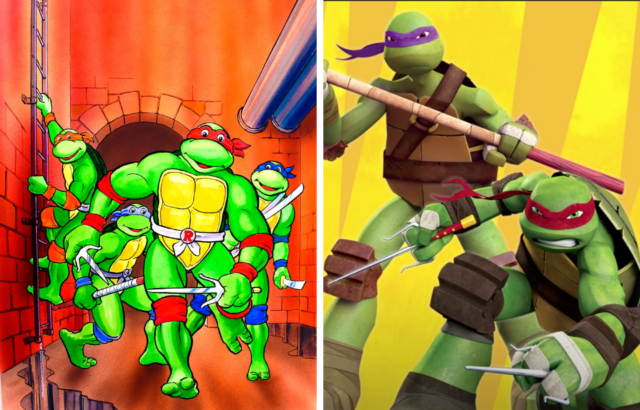 Based on a comic book, the Teenage Mutant Ninja Turtles are a band of humanlike turtle brothers that are trained in the art of Ju-Jitsu. Living underground, they come to the surface to fight crime. Each turtle has their own distinct personality, and those traits have never wavered since their first television appearance in 1987. Their faces constantly change with each new series or movie that is made, but the colors of their eye-masks always remain the same. 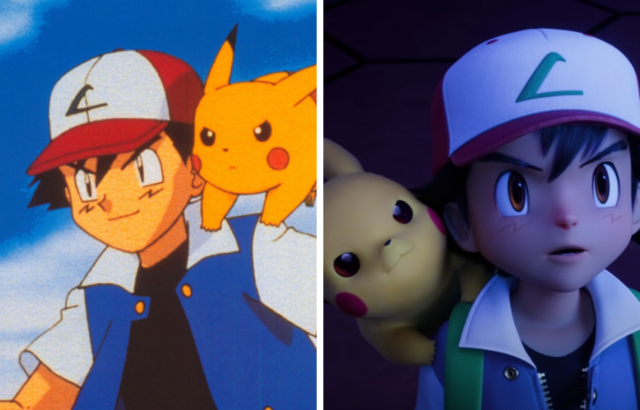 Pokémon started out in 1996 as a video game created for Nintendo by Satoshi Tajiri and his friend and illustrator, Ken Sugimori. It was originally called “Pocket Monsters” and became wildly popular, selling millions of copies of its Red, Blue, and Green versions of the game. It did not take long for the game to become a television series, which began in 1997. The franchise has since come out with many variations of the television show, and has also dabbled in movies. The most recent animation style features CGI enhancements which make the Pokémon creatures so much cuter than before! 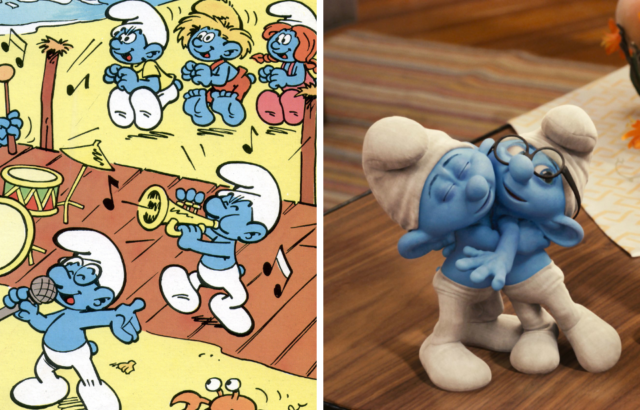 These little blue guys also started out as a comic book in Belgium in 1958. Their real success would come when The Smurfs was introduced to America, becoming a television series in the 1980s. The series ran for almost a decade before becoming its own movie franchise in the 2010s. The overall look of the characters remained the same over the years, but the introduction of 3D animation has really given these little blue guys some life.

Alvin and the Chipmunks 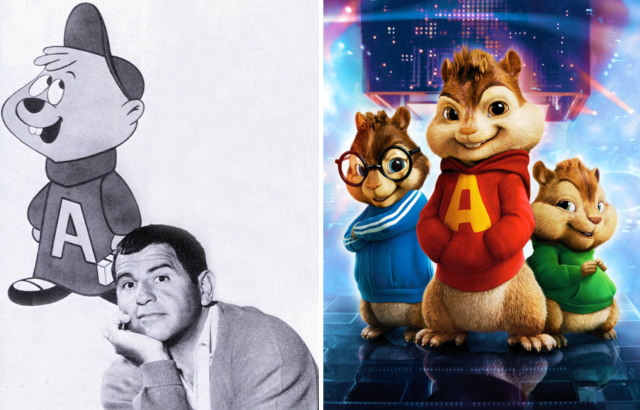 Alvin and his brothers had a very different beginning. They actually began as a song from 1958, “The Chipmunk Song (Christmas Don’t Be Late).” The popularity of the song led to the production of a short television series in 1961, and they continued to release music until the death of singer Ross Bagdasarian Sr. The three chipmunks would go on to create another television series in the 1980s, and would receive a makeover in the 2000s with the release of three new CGI movies. The size and color of their sweaters would remain the same, with the same iconic yellow ‘A’ adorning Alvin’s hoodie. 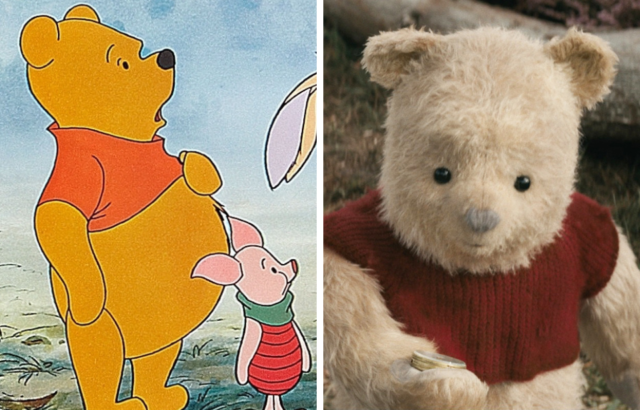 Based on a real bear, Winnie the Pooh became a literary staple for children’s novels, and in 1966 became animated in Winnie the Pooh and the Honey Tree. The 2D style showed a plump, yellow bear wearing a too-small red shirt. Winnie the Pooh has remained on television screens for decades, but one of his most recent makeovers came in the film Christopher Robin, which shows Winnie the Pooh as a stuffed animal more than a real bear. Nonetheless, the same yellow fur and red shirt are still present, making it obvious that this is the same bear we all loved growing up.

« Fan-Favorite Beatles Songs That John Lennon Absolutely Hated
Who Was the Colonel Before He Met Elvis? »