The words that the terrifying serial killer Dennis Rader wrote to Kansas police are just as haunting today as they were in the 1970s: “When this monster enter[s] my brain, I will never know. But, it [is] here to stay. Maybe you can stop him. I can’t.”

Rader, better known as the BTK Killer, murdered ten people in Witchita, Kansas between 1974 and 1991 while hiding in plain sight for over 30 years. But how did a Boy Scout troop leader, church president, and family man become one of the most prolific serial killers in American history?

Dennis Rader had a morbid childhood

Dennis Lynn Rader was born on March 9, 1945, and grew up in Witchita with his parents and three brothers. Both parents worked long hours, which Rader later explained made him feel ignored and resentful toward his mother and father.

Like many serial killers, Rader started to act on his dark impulses early in life. From a young age, Rader developed sadistic sexual fantasies about torturing helpless women. As a child, Rader also maimed and killed small animals – triggering his morbid obsession with torture that would motivate his crimes later on. 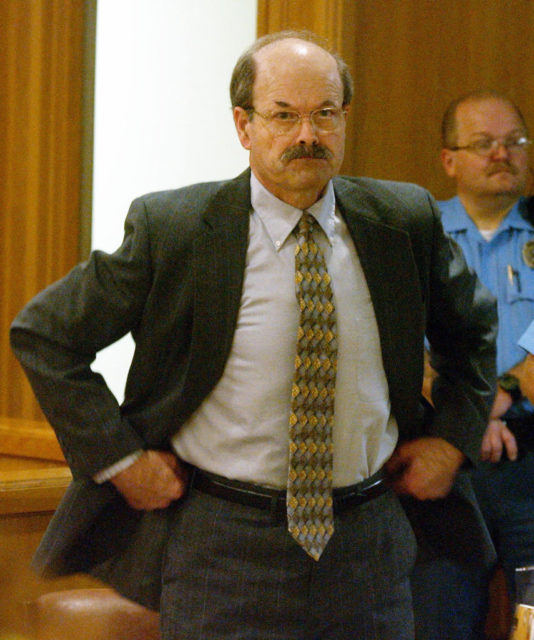 As he matured, Rader began to act out his fantasies and fetishes which included autoerotic asphyxiation. He would spy on female neighbors while dressed in women’s clothing and would bind his neck with ropes.

Rader served in the US Air Force from 1966 to 1970, and married his wife Paula Dietz in 1971. Dennis and Paula had two children together, Kerri and Brian. Even though his dark desires began to grow stronger, Rader was a well-known family man and an involved community member. No one could have guessed what he was capable of.

On January 15, 1974, 28-year-old Rader killed his first victims. Severing the phone line of a house in East Wichita, he entered the home of Joseph and Julie Otero. Rader knew Julie Otero from his former job at the Coleman Company. He strangled Jospeh and Julie and killed their two youngest children, leaving their bodies to be discovered by their three older kids when they came home after school. 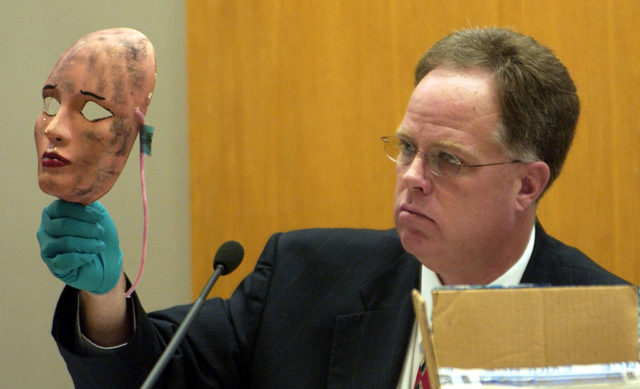 The Oteros’ youngest child, Josie, was forced to watch her mother’s death before Rader dragged the little girl down to the basement where he killed her. When she was asked what was going to happen to her, Rader calmly replied, “Well, honey, you’re going to be in heaven tonight with the rest of your family.”

Rader then took some “souvenirs” from the murders and went home to his family to get ready for church. Rader’s wife Paula was three months pregnant at the time of the murders, so while Dennis was busy killing children he was also preparing to have his own.

On April 4, 1974, Rader struck again. Kathryn Bright and her brother Kevin returned to their home to find Rader with a gun. Rader shot Kevin in the head and stabbed Kathryn to death. Shockingly, Kevin survived the gunshot.

Nine months after the Otero deaths, a young man came forward to the police and confessed that he committed the murders with his two friends. Frustrated that someone else was taking credit for his work, Rader called an editor at The Wichita Eagle and directed him to find a book in the Wichita Public Library. Inside the book, the police found a cryptic letter stuck inside that read:

“Those three dude you have in custody are just talking to get publicity… The code words for me will be…Bind them, torture them, kill them, B.T.K., you see he at it again. They will be on the next victim.” 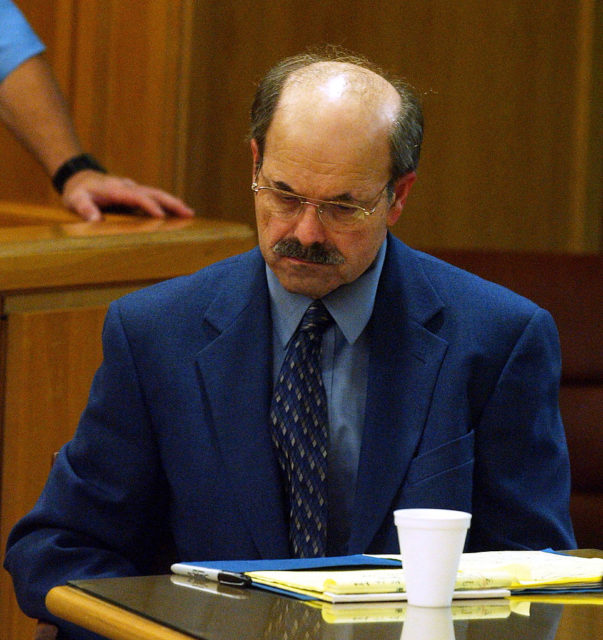 Dennis Rader looks away while pictures of him dressed in women’s undergarments are shown at his sentencing hearing. (Photo Credit: Bo Rader-Pool / Getty Images)

Rader also included information about the Otero murders that only the perpetrator would know, proving to police that their suspect was still at large. The letter was the first of many that would ultimately lead to Rader’s capture.

After several years without any attacks, thanks to a busy family and work life, BTK struck again in 1977. In March, Rader convinced a young boy to let him inside his house. He then barricaded the boy and his siblings in a room while he strangled their mother, Shirley Vian, in the other room. The children were able to escape and provide police with a vague description of the killer.

In December, BTK reported his next victim to the police. After strangling 25-year-old Nancy Fox, Rader called 911 using a payphone and told the dispatcher about a homicide at Fox’s home. After the murders, Rader continued to send cryptic messages to news outlets, but when he wasn’t satisfied with the amount of media coverage his crimes were getting, he sent a more menacing message to a local TV station:

“How many people do I have to kill before I get my name in the paper or some national attention?” he wrote, before listing a selection of nicknames, including “The BTK Strangler,” “The Wichita Hangman,” and “The Asphyxiator.” At this point, it was clear to see that one of Rader’s main motivations for committing the murders was to draw attention and create a media frenzy.

His nickname note did just that, and Wichita Police Chief Richard LaMunyon called a press conference and named the killer as the BTK Strangler for the first time, claiming the police “have no reason but to believe the individual has the capability to kill again.” They were wrong.

By this point, Wichita residents were terrified of becoming BTK’s next victim. Just two months after the press conference, Rader snuck into the home of 63-year-old Anna Williams but gave up after she took too long to return home. In the following weeks, Rader taunted Williams by mailing her personal items he had stolen from her home along with an eerie poem titled, “Oh, Anna, Why Didn’t You Appear.”

Throughout the 1980s, BTK killed three more victims until he suddenly stopped killing in 1991. While he was active, Rader’s wife Paula was constantly confronted with suspicious clues indicating that BTK was similar to her husband. When she noticed that one of BTK’s letters sent to a local newspaper shared the same strange spelling mistakes as the letters she had received from her husband, she taunted Rader and joked, “You spell just like BTK.” 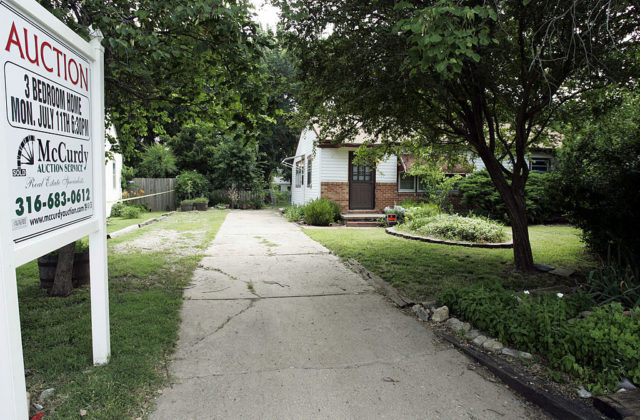 An auction sign stands at the driveway of the house at 6220 N. Independence where Dennis Rader, the admitted BTK serial killer, lived with his wife and two children. (Photo Credit: Larry W. Smith / Getty Images)

She never prodded for answers about the strange sealed box Rader kept in their home, and when she was questioned by police she insisted her husband was a good man and a great father.

Rader’s children also never suspected their father could be behind the horrendous murders. He even comforted them as they worried about the BTK killer after their neighbor Marine Hedge – whom Rader waved to every morning – became the eighth victim. “Don’t worry, we’re safe,” he assured his family  24 hours after he had snuck away from his son’s cub scout camping trip to murder Hedge before returning to the camp.

Thirty years after the Otero killings, The Wichita Eagle released an article recounting the BTK killings that frightened the city for 15 years. The article touched on how the killer had faded from memory. This infuriated Rader, who had worked so hard to make his presence known when he was actively killing.

With a renewed interest he revived his alter ego and sent a letter to The Wichita Eagle in 2004. The envelope, which was from a “Bill Thomas Killman” contained a copy of one of his victim’s driver’s licenses, a photo of her body, and the distinctive BTK symbol Rader had created. The letter declared that BTK was alive and still eager to kill. 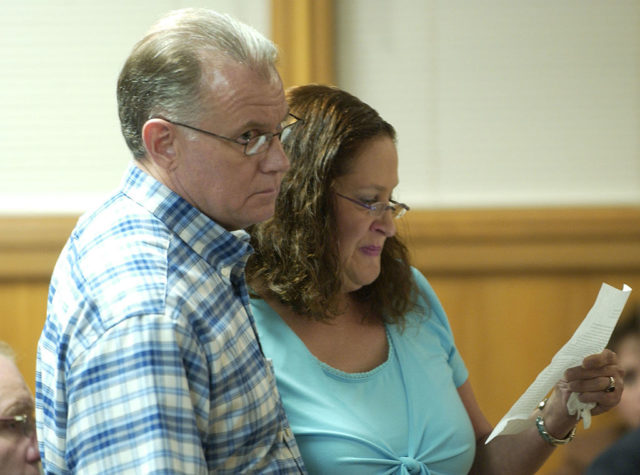 Next, Rader mailed a fake ID, pages for a BTK biography, and a word search that included clues to his identity like “prowl.” Later on, some people noticed the letters R-A-D-E-R and the number 6220 were also in the puzzle – a hint at Rader’s name and address. People also began to find Barbie dolls with hoods over their heads and their hands bound.

One doll was found in a cereal box, thanks to a postcard Rader mailed to a local news station which eventually led police to a local Home Depot. When asked if employees had seen anything strange, someone came forward and revealed they had found a cereal box in the bed of his pickup truck. The box included a message asking if BTK could communicate using a floppy disk without being traced. If the answer was yes, the box instructed police to run an ad in the newspaper that read: “Rex, it will be OK.”

A floppy disk led to the arrest of Dennis Rader

In February 2005 a floppy disk arrived in the mail and landed in the hands of a tech-savvy cop Randy Stone. Stone was able to extract the disk’s metadata which told him it had been used by “Dennis” at the “Christ Lutheran Church” as well as the “Park City Library.” A quick internet search for Christ Lutheran Church revealed the name of its president: Dennis Rader. 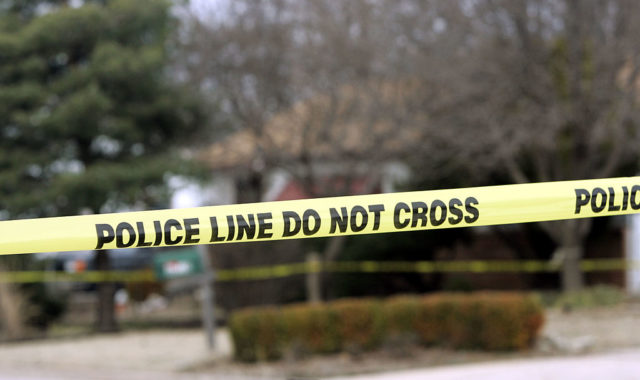 Rader’s daughter‘s DNA, obtained from a routine hospital procedure, proved to be a match to the DNA that investigators had on file from previous BTK crime scenes. They knew they had finally caught their killer.

On February 25, 2005, Rader was arrested and confessed to everything when he was confronted with the damning DNA evidence. He was convicted of all ten murders and since he committed the killing prior to 1994 – when Kansas re-introduced the death penalty – he was given ten consecutive life sentences in jail for a minimum of 175 years in jail without the possibility of parole. The 77-year-old serial killer is currently incarcerated at El Dorado Correctional Facility in Kansas, where he is likely to remain until his death.

As for his family, Rader’s wife Paula left their family home the day her husband was arrested and did not set foot inside ever again. His children also struggled to come to terms with who their father really was and the harm he had caused to countless other families. His daughter Kerri reflected, “There is almost a guilt there, for being alive. They died. And you got to live.”

« These are 13 of Some of the Best Classic Horror Movies of All Time, According to Rotten Tomatoes
Before and After: 10 Classic Hollywood Stars Who Underwent Plastic Surgery »