Saint Mary’s College was opened as a seminary in the 19th century, but one hundred years later as enrollment dwindled, the school was left to rot. Today, St. Mary’s has earned a haunting reputation as the “Hell House” of Maryland, believed to be a place where Satan worshippers gathered to perform dark rituals. What sinister secrets is the abandoned college hiding, and what separates legend from the truth?

The grand seminary was once a tavern

St. Mary’s was opened in 1868 on a cliff overlooking the Patapsco River in Ilchester, Maryland by the Redemptorist Order, a missionary congregation of the Catholic Church. The site was originally a hotel and tavern owned by the Ellicott brothers, who had the same name as the nearby city. The students settled into the old tavern and hotel structures as the school expanded into the grand historic building that now sits in ruin. 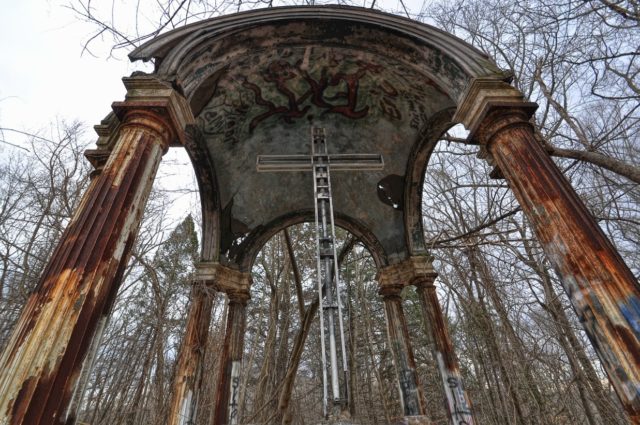 The metal cross above the altar of St. Mary’s. (Photo Credit: Forsaken Fotos / Flickr / CC BY 2.0)

The Italian Renaissance-style seminary boasted classrooms, bedrooms, a beautiful chapel, and perfectly landscaped grounds with winding pavilions laying out the 14 Stations of the Cross. The library was filled with as many artifacts as there were books – old coins, religious manuscripts, and even fossils were housed there.

The college had a small number of students for the first decades, but enrollment reached its peak with roughly 150 students. Students would spend six years at the school before becoming ordained priests. Nuns were also instructed at St. Mary’s College. In 1893, the Our Lady of Perpetual Help congregation was formed to help the poor in the community and still exists today.

The decline of St. Mary’s

In 1972, the Repemtorists left St. Mary’s and relocated to a new headquarters. A large part of the land that belonged to the seminary was handed over to the Patapsco Valley State Park. In the early 1980s, an attempt to turn the main building into upscale apartments failed. In 1983, someone else tried to establish a non-denominational monastery and spiritual commune – but that also failed. 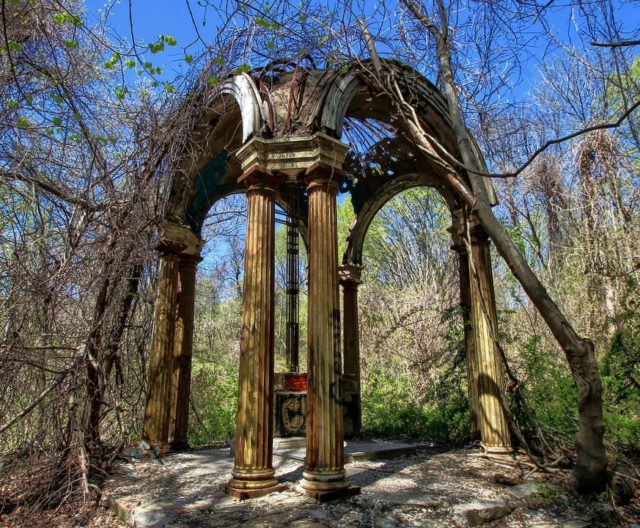 Eventually, the once-historic building fell into disrepair. On Halloween night in 1996, arsonists set the old building on fire, reducing it to rubble – except for one important landmark. Today, graffiti covers the walls of what remains. One specific gazebo is the source of local legends of ghosts and occult gatherings. The crumbling structure features a metal cross that has earned it the nickname of the “Hell House Altar,” which stands out against the haunting background of forest and ruins.

Legends of the Hell House in Maryland

Locals have heard stories of satanic cults, ghosts, and animal sacrifices. According to one legend, an insane priest slaughtered several female students at the school, while another claims that a priest raped several nuns. The priest managed to escape and the nuns became possessed by demonic forces that then murdered everyone in the college. Another version of the story claims the nuns were found hung with a pentagram drawn onto the ground below them in their own blood. 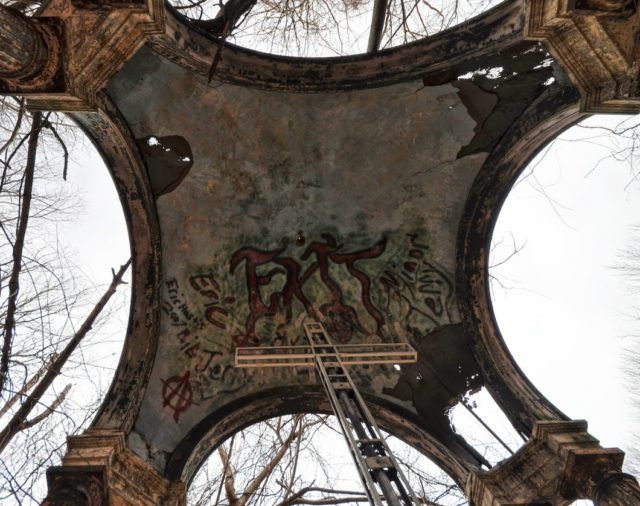 As mentioned, the school was built on land that had originally been home to a hotel and tavern, which could also contribute to the ghostly sightings in the area.

More from us: Revisiting the ‘Satanic Panic’ of the 1980s

None of these ghostly events actually happened, but when visiting the “Hell House Altar,” it’s easy to see how some people could get carried away by stories of possession, demons, and bloodshed.

« How Merv Griffin’s Show Biz Career Followed Him to His Grave
Keanu Reeves Made a 1980s Christmas Musical: You May Need the Red Pill After Seeing It »