Millennials and Zoomers Are Glamorizing an Era They Never Lived Through

There is a subculture of women in America who’ve chosen to adopt the traditional lifestyle of housewives from the 1950s, and they call themselves “tradwives.” The movement is fairly new and still rather small, but it has garnered a great deal of attention in a society that has worked long and hard to liberate women through the feminist movement. The tradwife trend has sparked some heated debates as it’s received more publicity.

What is a tradwife? 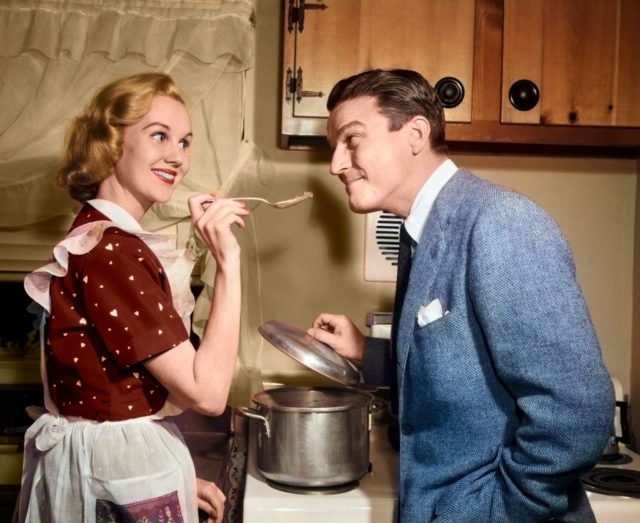 A 1950s housewife smiling while she feeds her husband a taste of the food she has been cooking on the stoke. (Photo Credit: Debrocke / Classicstock / Getty Images)

The term “tradwife” is short for traditional wife, and is used to represent a subculture of women who have adopted the lifestyle of white, straight, middle-class women from 1950s America. They’re glamorizing a decade from the past without ever having lived through it. Along with the lifestyle, many tradwives have also adopted the political ideology of the decade which prioritizes the nuclear family and promotes men as providers and women as homemakers.

Additionally, tradwives promote a woman’s submission to her husband and many have even adopted fundamentalist Christian principles. The movement is not exclusively white, despite emulating a lifestyle that existed while segregation was still present in America. There are women of color who have chosen the tradwife life for themselves as well.

This movement has been around for at least five years, though it’s still quite small. In 2020 however, the term received widespread exposure which has only increased in the media since. As with many movements, it’s become rather polarizing. A negative discourse around the term is far more prevalent than a positive one, suggesting that the greater population opposes the tradwife movement.

Tradwives are in opposition to the modern feminist movement 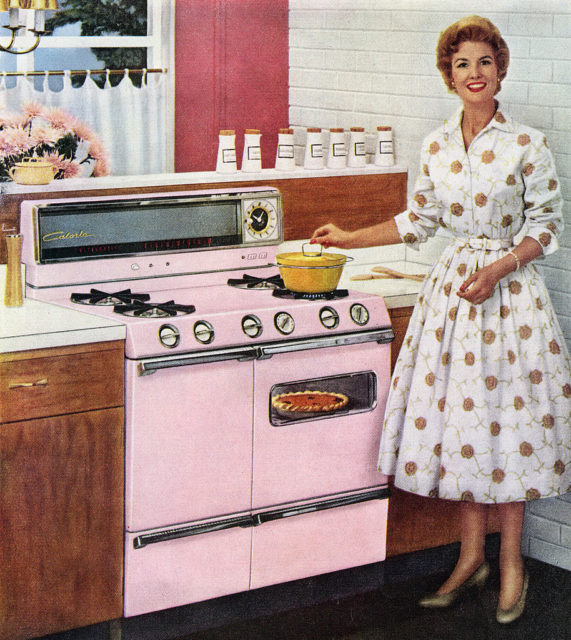 A happy housewife cooks on her new pink range, with a pot on the cooktop and a pumpkin pie in the oven, 1957. (Photo Credit: GraphicaArtis / Getty Images)

The tradwife movement seems to be in opposition to the modern feminist movement. Women who identify as tradwives post their lifestyle on social media to promote an alternative, though dated, alternative to other women who are questioning their role in the modern world. The movement implies that women are being fooled by a feminist movement that liberates them but results in more hardships. In this way, the tradwife movement suggests that fulfillment can be better achieved by reverting back to a traditional lifestyle.

One woman who identifies with the movement, Estee C. Williams, said burnout was one of the reasons she made the decision to become a tradwife. She said she felt pressured to pursue a career, and struggled to find balance while going to school and working. “I didn’t want to see myself struggle that way, and I definitely didn’t want to see myself struggle in school and struggle in work,” she said. “I wanted to figure out what my purpose was. When I became a strong spiritual woman, I figured out myself.”

Despite not considering herself too traditional, Willimas has openly adopted traditional gender roles, particularly in her relationship, and admits, “I love the ’50s aesthetic with my own modern twist on homemaking.” She believes it’s healthy: “The difference is that we have the choice. Women can choose not to be homemakers or work, or have a mix.”

Alena Kate Pettitt, a British author and blogger, explained, “Though a traditional housewife may submit to her husband, she is not considered of lesser importance to him.” However, at the same time, she also defines a tradwife as a woman who “openly rejects the side of feminism that is man-hating, takes a victim mentality in all things, and promotes that ‘The Future is Female.'” 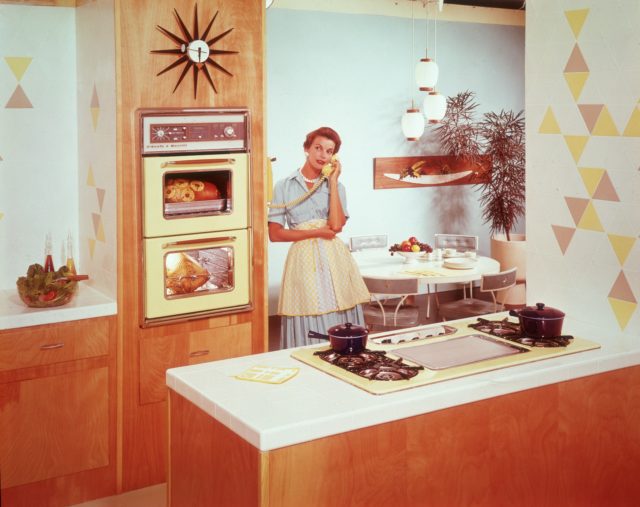 A housewife stands in the kitchen, talking on the phone as she stands next to an an oven with a ham and a turkey roasting inside, circa 1955. (Photo Credit: Tom Kelley / Hulton Archive / Getty Images)

Recent changes in society, most notably the COVID-19 pandemic, have created an environment where young women are looking to staying home as a viable life path. Women already take on the majority of unpaid domestic labor, and trying to juggle house work and paid work has made staying home seem more appealing for those able to do so.

Catherine Rottenberg, an associate professor at the University of Nottingham who has been studying the tradwive movement, wrote to CNN about the issue. “If there is no reliable health care, if women are making less money than their partners due to the gender wage gap and if there is no decent child care, then women ramping off the career path and serving their husbands and children provides a Band-Aid to these larger crises – and provides this Band-Aid with ideological cover.”

Structural problems in society, including a lack of child care, gender inequality in the workplace, and general overwork, are daunting to solve. Instead, the tradwife movement blames the feminist movement for the negative aspects of modern women’s life. Rottenberg explained, “Liberal feminism advocated for middle-class women to join the workforce as part of an emancipatory agenda. But if the workplace is toxic, and makes us sick, then entering the workplace doesn’t feel very emancipatory.”

She continued, “Precisely at a time when normative gender roles and dominant notions of sexuality have been challenged and in flux – while work life feels overwhelming – these ‘traditional’ values might seem like a refuge. Against a world that feels completely out of control, defining strict gender roles might feel empowering for some women.”

Looking back with ‘rose-tinted glasses’ 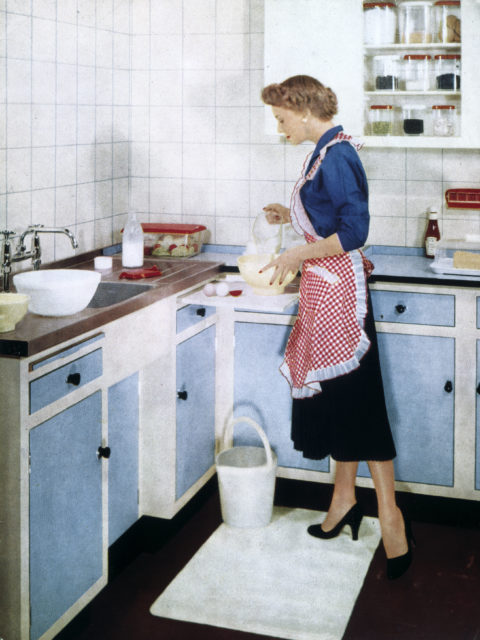 The core tradwife movement tries to promote their lifestyle in a positive way, but there is a subsection of the movement that has been adopted by the far right. Some of these people have been using the movement as a vessel to spread negative ideas, including white supremacist ideologies.

In this time of turmoil, some young women are considering becoming tradwives as a relief from the pressures of society. “Conditions for young people are quite bad, frankly,” said Annie Kelly, a journalist and researcher with expertise in anti-feminist and far-right digital cultures. Given the slowing economy and financial difficulties young people face today, “This pushes young people into a tendency to look back at the past with rose-tinted glasses,” Kelly said.

More from us: Money-Saving Tips From 1940s Homemakers That Still Work Today

However, many feel that supporters of the movement lack a true knowledge of the 1950s. Rottenberg has described the romanticized view of the past as “completely fictive.” Before adopting the lifestyle, many opposed to the movement feel these women should speak with actual housewives of the 1950s to truly understand what it was like. “All they need to do is to read Betty Friedan’s ‘The Feminine Mystique’ to see that their yearning for a simpler life is misplaced,” said Rottenberg.

« Flying In Style! Vintage Photos Of Celebrities And Their Private Jets
Sally Field’s Surprising Reveal About Her Worst On-Screen Kiss »