The 1940s saw the end of the Great Depression and the start of WWII. People who stayed at home wanted to feel that they were contributing to the war effort.

Through their own ingenuity and the encouragement of the government, homemakers learned how to make do and also came up with a variety of “hacks” to make life more enjoyable.

In times of rationing, providing a filling family meal was a top priority for a homemaker. As well as adding beans, rice, bread, or onions to bulk out a meal, 1940s homemakers had various ingenious methods for making a little food stretch further and making up for items they didn’t have. 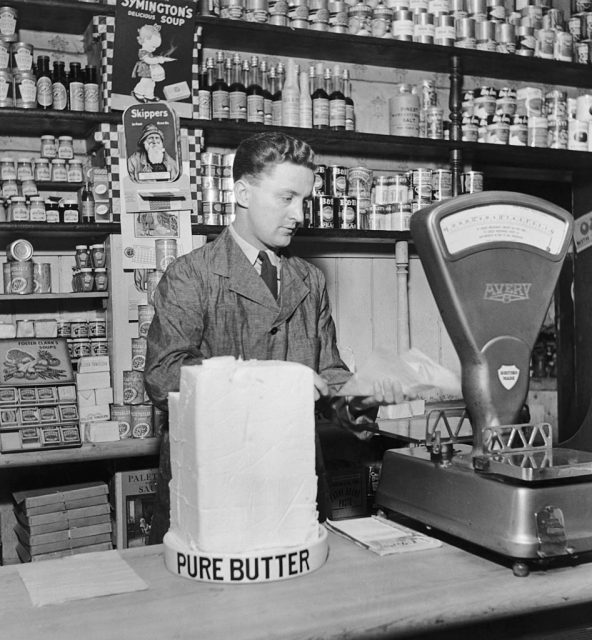 Today, we have a variety of oils that we can use for frying and cooking. But in the 1940s, butter was the primary fat used for cooking as well as baking and spreading on bread. By Christmas 1942, there was a serious butter shortage in America.

To make this precious ingredient go further, housewives would add oil and salt to a pound of butter. Not only does this stretch the butter out, it also makes it easier to spread.

Sugar was another strictly rationed ingredient. Homemakers would use as little of it as they could when baking or cooking, adding in honey to make up for the shortfall. 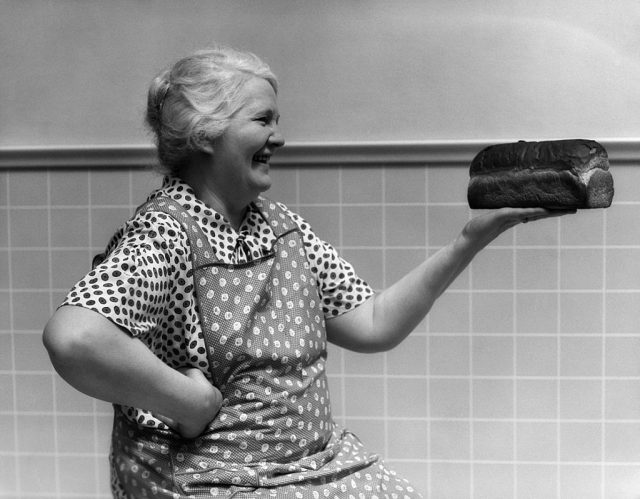 Bread wasn’t bought in supermarkets but was baked at home, meaning that it wasn’t full of the preservatives you get in modern bread. It could also be a family event, with mother and children making bread together.

Homemakers in the 1940s didn’t throw out bread if it went stale, either. Instead, they’d turn it into breadcrumbs (which could be used to bulk out dishes such as meatloaf) or they’d make it into croutons. If they had enough milk and eggs, they could even turn it into bread pudding.

Potluck dinners are not unknown today, but they’re nowhere near as common as they were in the 1940s. Several families would get together, each one contributing a different ingredient. A healthy and balanced meal could then be made for everyone to enjoy. 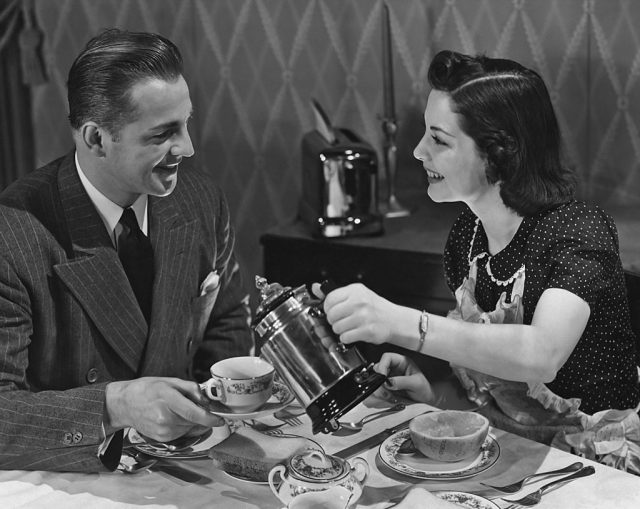 Coffee was definitely something that was in short supply in the 1940s. However, it became common to bulk it out with chicory after someone discovered that the plant had a similar, woody taste.

Chicory is part of the daisy family, and many people used it to bulk out diminishing coffee grounds to improve the richness of a cup of coffee and prevent it from tasting too watery.

Households today have many appliances and disposable items that we employ to make our lives easier. Nothing like that was available to 1940s homemakers, and their frugal way of life has many lessons for modern homes.

Tumble dryers are a common feature in kitchens today, but in the 1940s, housewives would hang the washing out on the line to dry. True, it’s not as quick and convenient as shoving everything in a tumble drier, but there are other benefits to line-drying. Not only does it save money on energy bills, but your clothes also last longer by using this gentler way of drying. 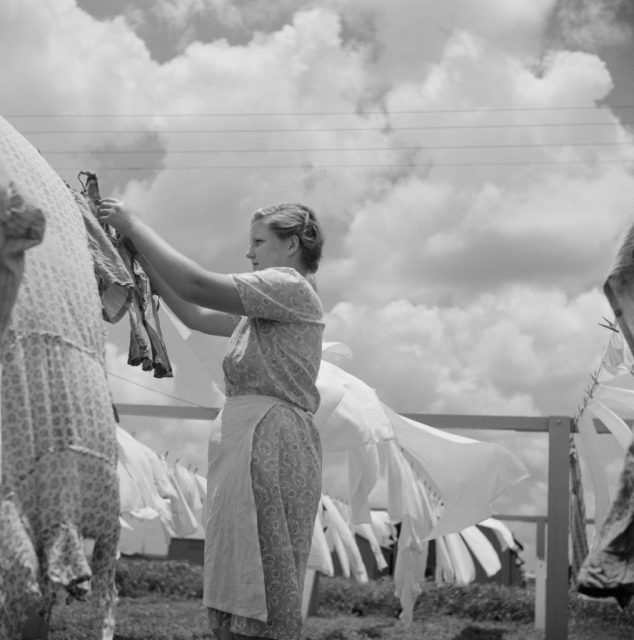 Borrowing and stocking up

“Borrow, don’t buy” was a principle that 1940s families held close to their hearts. In today’s society, if we need a tool for a particular DIY task or a cake tin for a special occasion, we’ll often order one, use it once or twice, then maybe donate it to a charity shop.

But in the 1940s, people would loan out lesser-used items, and if you needed a particular tool or device, you’d ask your neighbors if they had one you could borrow.

Libraries were frequently used to obtain books and other entertainment instead of buying them specially.

If there was a good deal going at a local shop, a 1940s homemaker would stock up at the bargain price. If it was fresh food that was on offer, batch meals would be made and then either eaten for several days or frozen for future consumption. 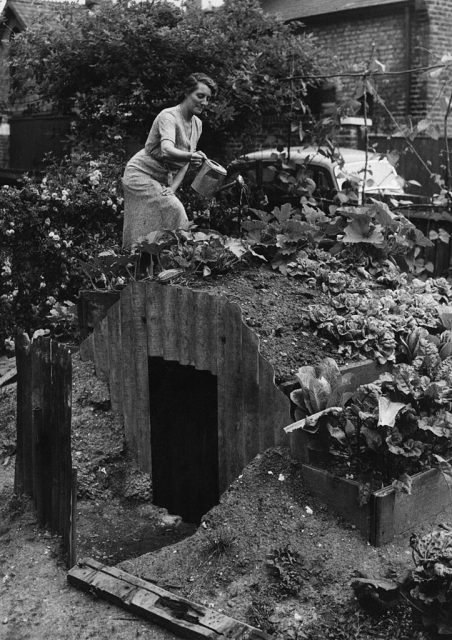 The government made a huge push for everybody to plant “victory gardens” or “war gardens,” which would enable every home to have access to fresh fruit and vegetables. For those households that didn’t have a personal garden, victory gardens were created in public parks where everyone could access them.

As an example to the American people, Eleanor Roosevelt herself planted one at the White House.

Households were also encouraged to keep rabbits and chickens for the fresh meat and chicken eggs.

Such fresh produce would heavily supplement the family diet in times of strict rationing. For those today who are worried about the carbon footprint of imported produce, growing your own can be a healthy, cheap, and environmentally friendly way to eat.

Most parents in America today use disposable diapers for speed and convenience. But the cloth nappies used in the 1940s can be a cheaper alternative. Admittedly, they need cleaning, but they are far more environmentally friendly and, despite the extra load on your washing machine, can work out to be cheaper too. 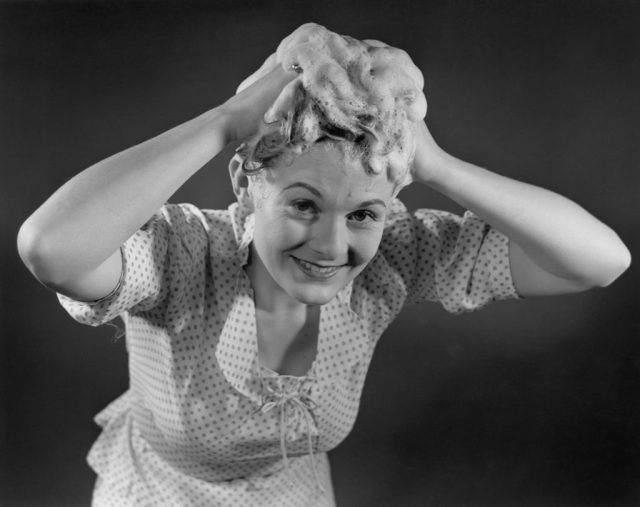 The Second World War might have meant that households had to make considerable compromises, but women were still encouraged to be beautiful as part of the war effort.

But how to ensure you look your best when everything is in such short supply? Women came up with some amazing life hacks.

No lipstick? Use beetroot juice to get a deep red pout. No hair dye? Lemon juice will brighten up dull blondes while brunettes can opt for henna or rhubarb for dyes. Short of shampoo? Use rags to tie up your hair in a “victory roll” and disguise greasy hair, or else rinse your hair with beer or vinegar for extra shine.

Chemicals and fuel were being saved for the soldiers rather than the home. As such, housewives would use vinegar, baking soda, toothpaste, and nail polish to clean the house.

To conserve both money and electricity, everyone in the house would turn off the lights after leaving a room. Sometimes, only one room in the house was heated, and all the family clustered together in that one room for warmth. That might sound a little extreme for today’s families, but certainly ensuring that all lights, computers, and other gadgets are turned off will help both the environment and a family’s finances.

Gas was in short supply, so more people used public transport or walked. If it was essential to use a car then people would carshare to make it more economical.

Virtually nothing was thrown away in the 1940s. From repurposing jars to upcycling clothes, the 1940s homemaker could find a new lease of life for anything looking tired. 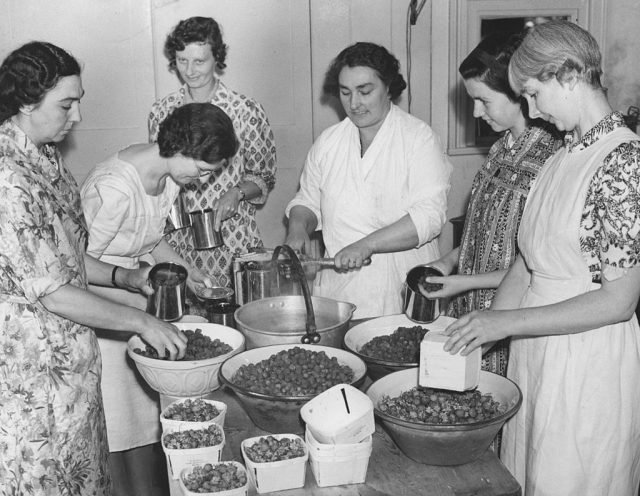 If a pan started losing its shine, then bubbling some rhubarb in it for twenty minutes before rinsing out would work as well as any cleaning fluid in getting that sparkle back.

Aluminum was needed to make planes, ships, and mess kits, so households were encouraged to collect used foil and donate it to the war effort. “Tinfoil drives” offered movie tickets in exchange for foil.

Alternatively, a scrunched-up ball of foil could be used as an effective pot scrubber for washing dishes.

Preserving was seen as a patriotic act to help the war effort because canned food was desperately needed for the troops. Consequently, housewives would regularly preserve any leftover fruit and vegetables they might have.

Today, jars can not only be used for preserving food, they can also be turned into any number of things from a vase to candle holders.

In the 1940s, if a garment had holes in it, either those holes were mended or the whole thing was cut up and made into something else.

Turning tired adult clothes into brand new children’s outfits was incredibly popular. Those with less money (or, perhaps, more children) would take to repurposing empty flour and feed sacks into clothes. When some manufacturers learned about this, they used patterned fabric to package their goods, making the resulting clothes quite appealing.

Anything that was too disheveled would be made into rags, which could then be used for cleaning purposes or to curl hair. Women would twist rags into damp hair, sleep in them, and then have bouncy locks in the morning.

While knitting is a popular pastime today, most of us buy our wool from a craft shop. But in the 1940s, wool was obtained from sweaters and other clothes that were starting to unravel. The item of clothing was pulled apart and the yarn was used to make something brand new.

Housewives in the 1940s made sure that everything in the house was entirely used up and nothing was thrown away. 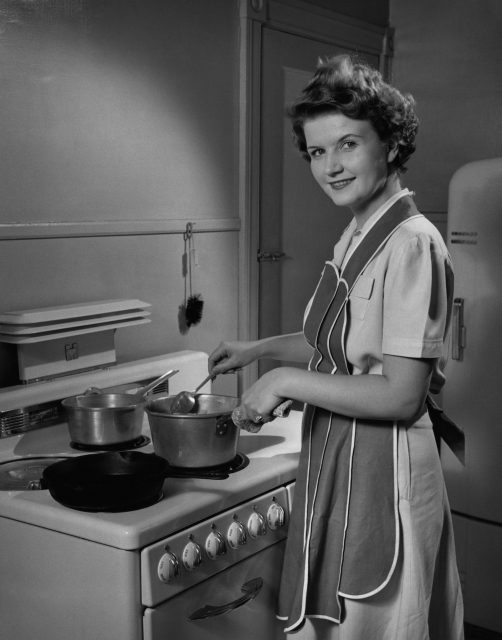 There were no fancy liquid hand soaps in the 1940s – only soap bars. The trouble with a soap bar is that it can be pretty useless when it’s been worn down to a thin piece. To ensure even this wasn’t wasted, housewives would collect such pieces of soap and put them all in some old pantyhose. The material was tied up and cut, and then the family had a brand-new bar made out of the remnants of all the old ones.

For those who don’t feel like using old pantyhose in their bathroom, just smoosh the old bit of soap on top of the new one, and that’ll ensure it doesn’t go to waste. 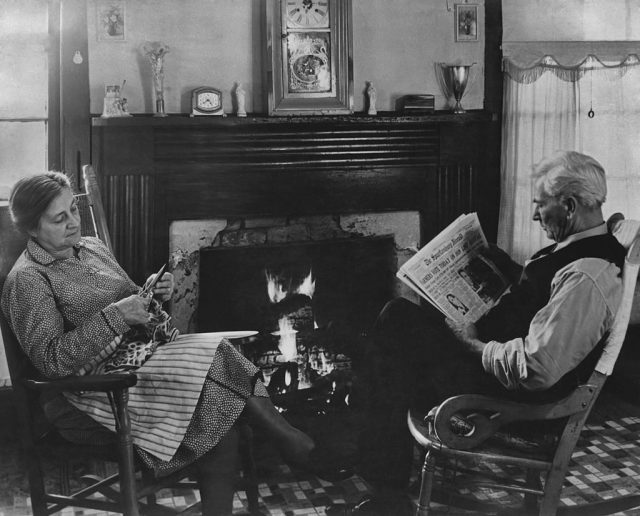 Home insulation today is far more advanced than it was in the 1940s. To try and keep a little bit of extra warmth in their houses, families would save up newspapers and stick them on the walls or windows to keep in the heat or stop draughts.

For those today wanting to reuse this commodity, old newspapers can be used as drawer liners, to clean windows, added to compost, or used as wrapping paper.

An advertisement in Vogue magazine from the 1940s encouraged women to share copies and recycle old ones they didn’t want. The ad states: “One average issue of Vogue would provide 17 twenty-five pounder shell cups, or 1 box for airplane cannon shells, or 13 cut-out targets for rifle practice.”

How many of us are guilty of looking in the vegetable drawer of our fridge and thinking that the broccoli has turned or the carrots are a bit soft then putting them in the trash or the compost? That was never the case for the 1940s homemaker.

Any vegetables that were past their best could be made into soup. The base of the soup might also be homemade broth, made from boiling meat bones and vegetable peelings in water.

More from us: Al Capone started one of the first Soup Kitchens during the Great Depression

Meatloaf was another staple of the 1940s table that helped to use up anything in the fridge. As mentioned above, it could be bulked out with breadcrumbs made of stale bread. If the meat was a little tough, then a casserole would ensure it became palatable for the whole family.

« 8 Stunning Royal Tiaras That Ooze Glitz And Glamour
Auto Polo Is Just Like Regular Polo, But With More Horsepower »