Auto Polo Is Just Like Regular Polo, But With More Horsepower

If there’s one thing the early 1900s are known for, it’s weird sports. Pistol dueling, club swinging, and skijoring were all popular, but there’s one that outranked them all: auto polo. A dangerous version of equestrian polo, it was the motorsport of the 1910s. However, like most things, it lost steam upon the dawn of the Great Depression.

Its origins are disputed

The origin story of auto polo is many-faceted. The earliest record dates back to Joshua Crane Jr. in 1902, who dropped the idea after being told it wouldn’t catch on. There’s also evidence a match was first played in a regimental armory building in New York City around 1908 or 1909. 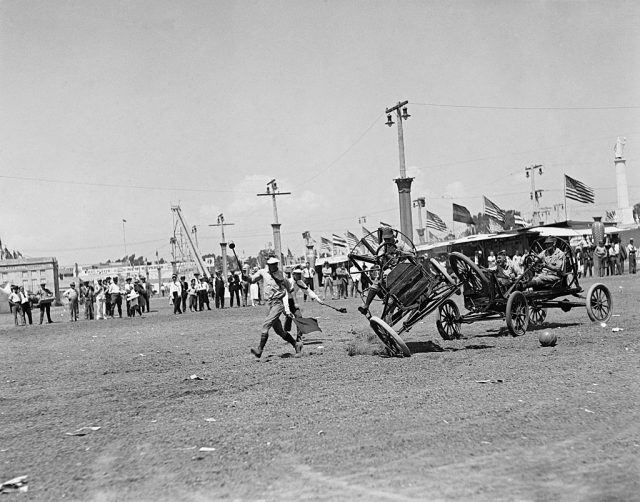 The official inventor is said to be Ralph “Pappy” Hankinson. Hankinson was a Ford automobile dealer from Topeka, Kansas who thought up the concept of auto polo as a way to sell Model T vehicles.

He organized the “first” match in July 1912 in an alfalfa field in Wichita between two teams: the Red Devils versus the Gray Ghosts. Some 5,000 attendees watched the match, which featured four vehicles and eight players.

Similar to equestrian polo, except for one thing…

Auto polo followed similar rules to equestrian polo, except for the fact that it used vehicles, as opposed to horses. Each match was 60 minutes long, with 30-minute halves. It could be played anywhere — a football field, the fairgrounds, an indoor arena — so long as the area was at least 300 feet long and 120 feet wide.

The aim was to score against your opponent’s goal, which was 15 feet wide. Two players were allowed in each car. The driver was responsible for ensuring the car went where it needed to go, while the malletman hit a regulation-sized basketball. He accomplished this with a croquet-like mallet that had a three-pound head. 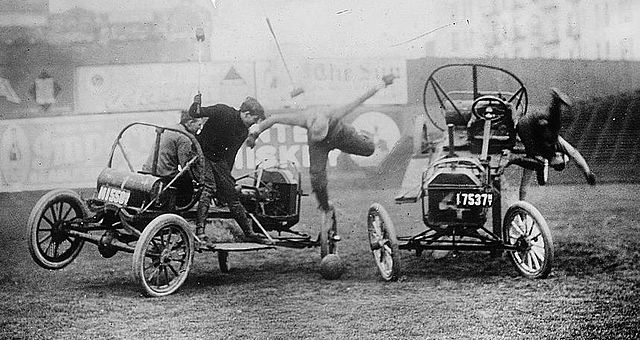 The first cars used were light-powered and unmodified Mobile Runabouts that cost approximately $650. As time went on, the majority of the vehicles resembled stripped-down Model Ts, without windshields, roofs, or doors. Later versions were outfitted with rollbars to protect the occupants.

At their fastest, the cars could reach a top speed of 40 miles per hour. They had the ability to change directions quickly, and contained the transmission necessary to successfully pull off rather tricky maneuvers. The referees had their own vehicles, and to ensure their safety there was a half-point penalty against teams that ran them over.

Auto polo was just as dangerous as it sounds. While all players risked injury, deaths were fairly rare. Injuries typically occurred when the vehicles rolled over, or when they were rammed by an opponent’s car.

Rollcages installed over the radiator and near the platforms protected drivers, who also wore seatbelts, but did little to protect the malletmen. They were often thrown from the cars and sometimes run over, resulting in severe bruising and broken bones. 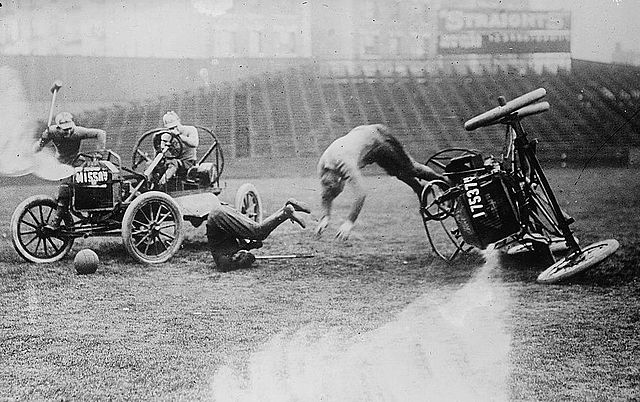 Attempts were made to protect players, evident in the introduction of helmets and heavy leather leggings. Not everyone adhered to these safety protocols, however, and many refused to make use of them until they themselves suffered an injury.

Players also had to contend with damage to their vehicles. By the time a match finished, both cars had suffered extensive damage, and some couldn’t even run afterward. This left players largely uninsurable, due to the repair costs — it wasn’t nicknamed the “Most Expensive Sport in the World” for nothing!

After its debut in 1912, auto polo steadily gained popularity. There were leagues formed under the guidance of the newly-created Auto Polo Association, and exhibition games regularly occurred. Unlike in the U.S., the sport was viewed warily by those overseas, with one British publication calling it both “very impressive” and a “lunatic game.”

Attempts were made throughout the 1910s to spread auto polo across the world. It was the first motorsport showcased at the Canadian National Exhibition in Toronto, but never ended up catching on in Canada. Hankinson himself traveled to Manila and the United Kingdom to promote the sport, and American teams toured Europe during the summer of 1913. 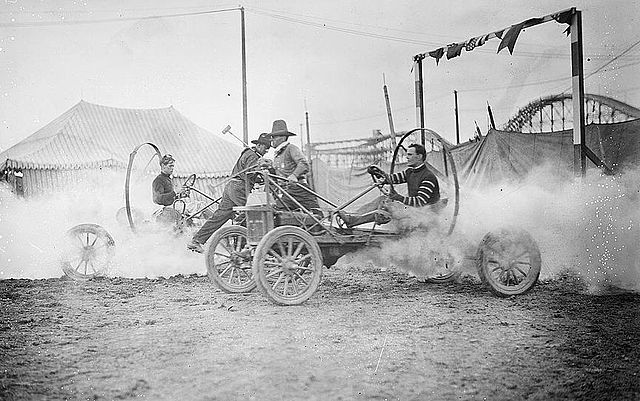 By the early 1920s, auto polo matches were occurring nightly in Chicago and New York City at such venues as Coney Island and Madison Square Gardens.

More from us: The First Sports Car Race in History Held Among Beautiful Sicilian Hilltop Towns

The mid-to-late 1920s saw the popularity of auto polo begin to wane. With the Great Depression looming, many players could no longer afford to repair the damage caused to their vehicles. While the game saw a resurgence in the U.S. after WWII, it was abandoned by the middle of the century.