1,200-yr-old Soap Factory Unearthed in Israel – Check out the Ingredients

A soap “factory” from the 9th century CE has been found in the Negev Desert, southern Israel. The Bedouin town of Rahat played host to the structure, excavated by the Israel Antiquities Authority (IAA). The project is a partnership between professionals and the community, and has given fresh insight into the process of making soap 1,200 years ago.

The “large, pillared structure” is the oldest discovery of its kind, dating back to “the Islamic Abbasid period, after the Arab conquest of the region” according to Archaeology.org. Smithsonian Magazine reports the compound also shows signs of being “what was once a large, luxurious home”.

Soap back then was effective but a very different product to what’s available now. Residue analyzed on site reveals a mixture of olive oil and ashes from burnt saltwort plants (salsola soda). The latter ingredient was used for its potash salts and potassium content. After blending it was time to fire up the pots. Cooking took a reported 7 days. 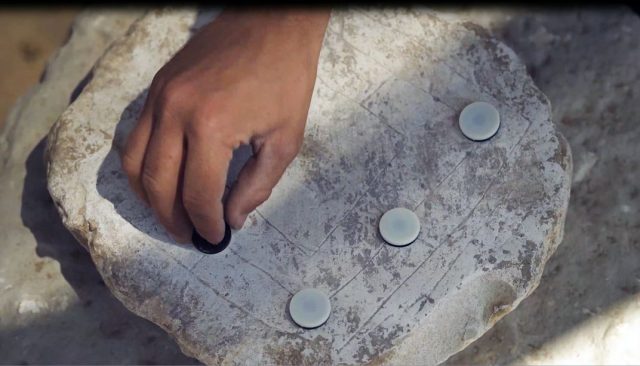 That was just the beginning. The mixture would need to harden in a basin for 10 days before it could be cut into bars. Wait another couple of months and hey presto, the soap is ready to roll! “The outcome was a crucial staple in an area where the heat, sand and wind made personal hygiene especially demanding” writes the Jerusalem Post.

The family who lived there would likely have made their money from soap. Experts believe it was exported across the Arab world in large quantities. While soap manufacture is known about from the Ottoman period, this find takes things way back. Excavation director Dr. Elena Kogen Zehavi says in an IAA statement the residue enables archaeologists to “recreate the traditional production process of the soap industry.” She adds, “For this reason, it is quite unique”. 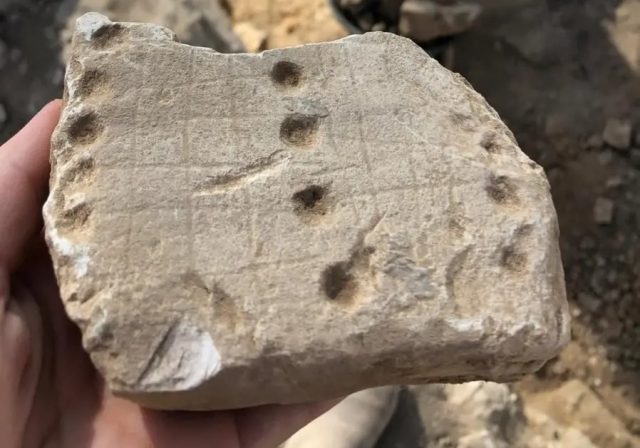 Another board game found at the site was called “Hounds and Jackals,” or “58 Holes” (Credit: Emil Aladjem/Israel Antiquities Authority)

A cuneiform inscription some 5,000 years old describes soap’s earliest days. Cuneiform is an ancient Sumerian writing system which involved marking clay tablets. Smithsonian Magazine reports the inscription shows “the process of washing wool in preparation for dyeing”. The Mesopotamian product was made from “ash, water and fat”, though whether it was applied to the body is unknown.

One civilization who certainly didn’t do that were the Romans. Referencing Judith Ridner’s suds-heavy history for The Conversation, the Magazine writes they took a bath before “anointing the body with oils and scraping excess grease away with a metal or reed tool known as a strigil.” Someone could have passed the soap, as it was in production. For some reason it doesn’t appear to have been used for personal hygiene purposes.

It wasn’t all work work work out in the Negev Desert. The team, made up of volunteers and experts, also found evidence of board games. One was a long-established game of strategy called Windmill, for which the family used a round limestone board made from limestone. It’s still played today.

Another section of stone is the basis for Hounds and Jackals, also referred to as 58 Holes. “The game was known to be played already in Ancient Egypt and Mesopotamia at least 4,000 years ago” writes the Post, “and it apparently involved two players throwing dice or sticks in order to advance on the board and reach a specific point.”

Quoted by the Post, Rahat’s Mayor Fahiz Abu Saheeben says the soap factory unearthing has “revealed the Islamic roots of Rahat.” The truly collaborative effort appears to have inspired the people there. Mayor Saheeben comments, “We are proud of the excavation and happy that it took place in cooperation with the local community.”

As historic soap operas go, this is surely the ultimate storyline!