An ancient 12th century church in East Yorkshire, England is welcoming stone sculptures from Narnia. 14 characters from C.S. Lewis’s enduring fantasy saga – including Aslan the lion, Mr Tumnus the half-man half-goat and talking mouse Reepicheep – are being immortalized and mounted to the exterior of St Mary’s Church in the town of Beverley.

The magical move marks phase one of an epic 10 year restoration for the structure, replacing crumbled Medieval stonework. The National Lottery Heritage Fund has contributed money to the project. Masons Matthias Garn are handling the commission under umbrella title “Curious Carvings”. The company focuses on promoting the craft for future generations.

Narnia’s finest arrived in the church following a collaboration with East Riding College. St Mary’s brought students into the church for a looksee. According to the Yorkshire Post they “learned about the practicalities of stone craftsmanship and were then asked to create their own designs inspired by stories and legends that would still strike a chord today.” 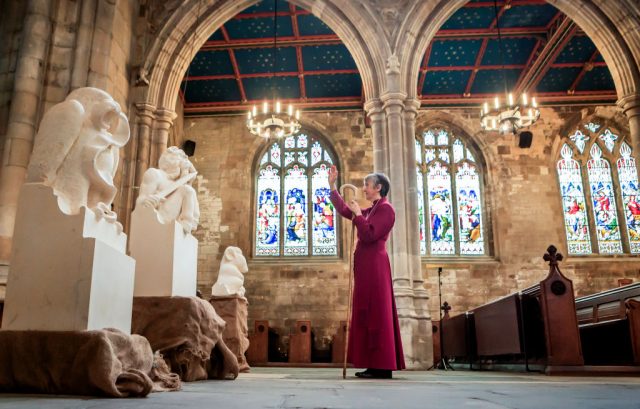 Bishop of Hull Alison White blesses statues of characters from the Chronicles of Narnia at St Mary’s Church in Beverley, East Yorkshire. (Photo by Danny Lawson/PA Images via Getty Images)

A drawing of Mr Tumnus by Mel Watkins caught people’s imaginations and the idea developed from there. Indeed, Lewis himself was inspired to write the Narnia books after picturing the character in his head standing under a lamppost. After permission was granted by the C.S. Lewis Company Ltd things got underway. Kibby Schaefer was hired on the design side and recently the Bishop of Hull Alison White visited St Mary’s to bless the carvings.

If Lewis’s world seems frivolous for a place of serious worship then think again. The author became a devout Christian following personal tragedies. Consequently, Narnia is seen as carrying deep personal and spiritual significance. “Many scholars and critics have argued that the Chronicles of Narnia are a Christian allegory,” notes Smithsonian Magazine, “with the lion king Aslan, who is killed by the White Witch but later returns from the dead, cast as a fictional representation of Jesus.” 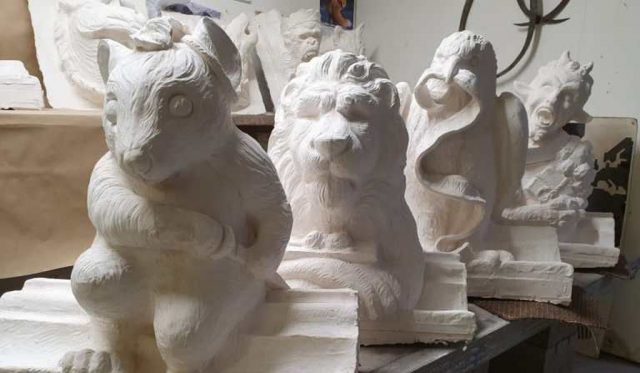 Quoted by St Mary’s, Rev Becky Lumley believes “the story has much resonance for today”, comparing the young heroes’ wartime evacuation to the current national crisis. She adds, “Our children today are in a very different kind of lockdown from that of the Second World War but they too need to imagine new possibilities and hope.”

And Narnia isn’t the only connection to a famous author for the church. Its sculpture the Pilgrim Hare is thought to have given Lewis Carroll the idea for Wonderland’s White Rabbit.

Wooden carvings inside the church called “roof bosses” are also being restored. The St Mary’s website states they “chronicle the life, times, stories, hopes and dreams of Beverley’s Tudor residents, and are unique in design.” The bosses mix Biblical images and historic symbolism “which might be obscure today”. St Mary’s reportedly has one of the biggest collections of bosses.

Lions, witches and wardrobes maybe aren’t that out of place in the church setting. The Guardian writes that imagery on roof bosses features “depictions of kings, saints, angels, lions, unicorns and mermaids”. Dr Jennie England, who works at St Mary’s as Heritage Learning Officer, comments to their website: “The precedent of animal and character carvings in churches stretches right back to medieval times”. Roof bosses apparently told stories to those who couldn’t read, not too far removed from the tales being told to readers by C.S.Lewis.

Related Article: Beautiful 300-yr-old Churches Made Entirely out of Wood Without any Nails

The Narnia franchise shows no signs of slowing down, with Netflix acquiring the rights to the series. A series of movies were made in the 21st century by Walden Media. The last of these, ‘The Voyage of the Dawn Treader’, was released a decade ago.

As for the latest manifestation of Lewis’s universe, the 14 characters should be ready by Autumn. They are being displayed at ground level before finding a higher purpose on St Mary’s walls…