Myths and legends have been around for centuries and many people know the legend of the lost city El Dorado.  Now explorers may have uncovered what could actually be a part of El Dorado.

A recent satellite photo-detected a giant mound that stretches nearly 155 miles, suggesting that it was made during a pre-Columbian culture built up by a lost Amazonian civilization which could date all the way back to 200 AD.  The aerial photo shows the earthworks, made by this civilization and depicting something much like a crude snowman.

The legend of El Dorado has claimed many lives of those who never gave up searching for the wealthy city.  They braved the Amazon jungle searching for the vast city and treasure, but have never been successful.  Ever since the Spanish conquistadors traveled to the region, there have been people looking for the city the Aztecs and Incas left behind.

While many know it as the lost city of Eldorado, others call it the City of Z.  Those who searched the jungle endlessly were either lost in there forever, having died of natural causes, or they came back with nothing in hand, causing many to believe the whole thing was merely a legend.  Historians and scholars who study the lost city believe that the Amazon was, and still is, not fit for human settlement.

However, new aerial photos prove that there could, in fact, be something hidden in the vast jungles of the Amazon.  The images reveal nearly 200 geometric earthworks that were carved into the upper Amazon basin near Brazil’s border with Bolivia.  The earthworks span nearly 155 miles with circles, squares, and other shapes.  These are formed into ditches and enclosures, which indicates they were built long before Christopher Columbus set foot onto New World soil.  Some of the earthworks are dated as early as 200 AD while others are dated to 1283.

The scientists who have worked on the area believe there could be more than 2,000 other structures under the jungle canopy, completely hidden from society.  It is believed that the exposed area can be seen by air because that area has been cleared of its forest for agricultural use.

The structures were created by trenches that measure  about 36 feet wide and a few feet deep, and the banks are about  three feet high.  The people who made them also ringed the mounds with ceramics, charcoal, and even stone tools.  Many scholars believe the mounds were used for fortifications, homes, and ceremonies.  The mounds could have been home to 60,000; more people than the largest European cities during medieval times. 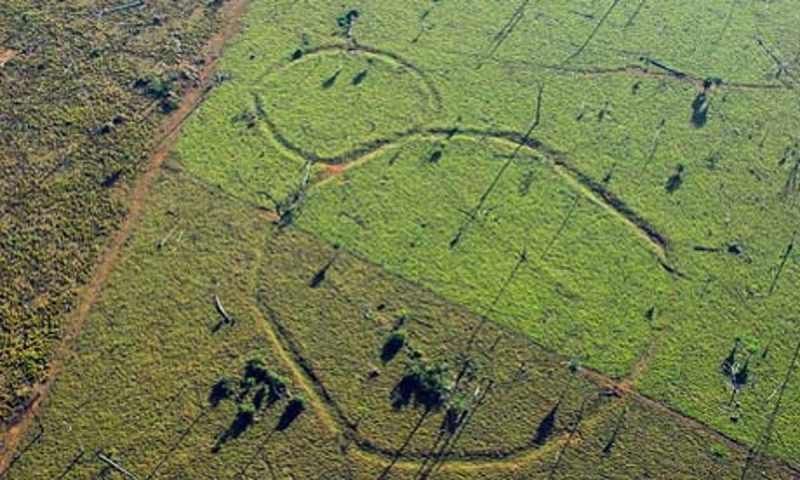 Finding the banks not only means that people lived in the area, but also that the soils were rich enough to support agriculture.  Many scholars believed the land would not be useful for agriculture.

After further investigation, scientists noticed that all of the mounds were slightly slanted to the north and were symmetrically placed. Scholars and scientists believe that this is due to the astrological significance of the mounds.  What’s more, all of the earthworks were made in a similar style, which suggests that they were all made by the same culture.

One scientist mentioned that when it comes to Amazonian archeology, different finds existed in different ecosystems.  It was interesting that one culture would spread out so far over the region.

The mounds were actually spotted in 1999, but the scientists had no idea just how far they expanded due to the heavy forest covering most of it.  Some anthropologists believe that the engineering it took to make the precise mounds is just as significant as that of the pyramids.

The finding of these mounds had led to separate discoveries in the south near the Xingu region.  There were interconnected villages that were known as the garden cities.  Those villages are dated to 800 to 1600 years, and they included houses, moats, and palisades.

What scientists thought for the longest time was that the areas were too harsh for large civilizations to exist, leaving only small tribes living throughout the areas.  However, perhaps the conquistadors’ stories are true about the cities that “glistened in white.”  Some scientists believe that the mounds and villages became hidden after whole civilizations were wiped out by disease, which is why it took so long to discover just how large those mounds actually are.

« Cave Drawings Depicting Huts the First of its Kind, Suggests Hunter-Gatherers Knew Landscape
Rare footage shows what was like to be in New York in the begining of the 20th Century »