Sarcophagi Found in Italy Remained Intact for Over 2,000 Years

Just recently, archaeologists found a fully-intact Etruscan tomb.  Inside it was a complete sarcophagi, grave goods, and a marble head.  This tomb was found in the Umbria region in Italy.  Archaeologists worldwide are saying that this is one of the most important finds in recent history.

The tomb has been dated at the end of the 4th Century BC.  The burial site was found by a local farmer who opened a void in order to work his plow near Citta della Pieve, which is a small town southwest of Perugia.

The intact tomb is providing many archaeologists with a new view on the daily life of the ancient people who disappeared nearly 2,000 years ago.

One of Umbria’s archaeologists, Clarita Natalini, said that this discovery was completely unexpected.  What she found most exciting is that the site is away from any other city or site that looters would have found.  This resulted in the whole tomb being untouched until now. 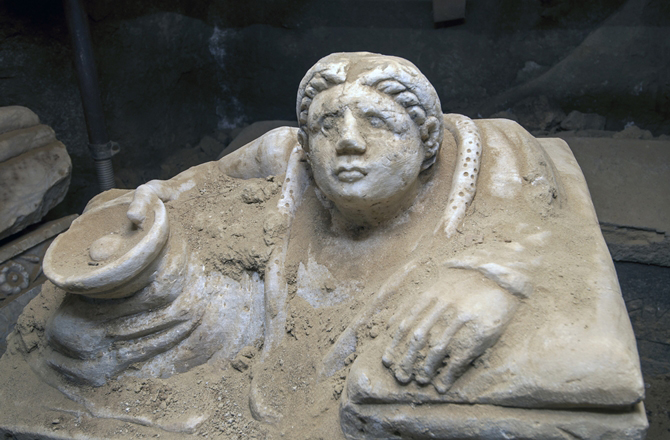 figure on the lid of one of the urns containing the ashes of the deceased.

To bring to light just how exciting this is, she said that finding any Etruscan tomb untouched is extremely rare.  This allows historians and archaeologists alike to study the lives of the ancient people.  Without having anything removed from the tomb, they now have everything they need to make a full report.

The Etruscans were, and still are, described as fun-loving people who taught the French how to make wine.  The Etruscans taught the Romans how to build roads, and introduced the art of writing to Europe.  The people and city began to flourish around 900 BC and are considered to have dominated Italy for nearly five centuries.

The Etruscan people were known for their art, agriculture, metalwork, and commerce.  But they started declining during the 5th Century BC after the Romans began to grow in power. By 300 to 100 BC, the Etruscans were absorbed the Roman life and the ways of the Roman Empire.

Sadly, after becoming a part of the Roman Empire, their non-Indo European language vanished.  Historians and linguists are not able to study their language since they did not document their literature or everyday lives.  The Etruscans have been considered one of antiquity’s greatest enigmas.

The only pieces historians and archaeologists are able to study are the tombs and cemeteries, as everything else is gone.  This causes the archaeologists and historians to have to construct the ancients’ entire history and daily life just by what is left. 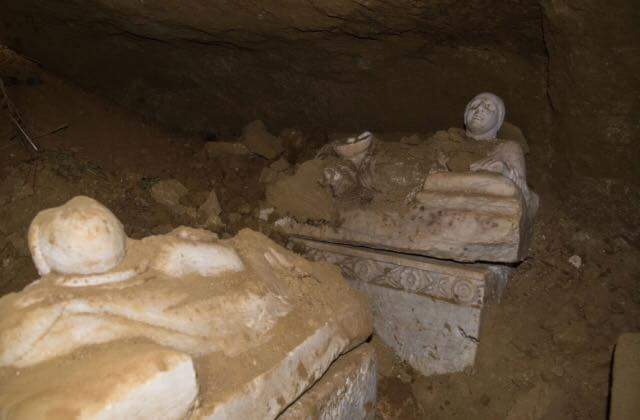 The interior of the tomb.

Natalini and her team are hoping that the fully-intact tomb will bring them more to study than the other tombs that have been found.  When the team opened the tomb’s entrance, known as dromos, they found that it was perfectly sealed with two double doors made from heavy stone.

After opening up the doors, they found a 16 square foot rectangular chamber with two sarcophagi, four marble urns, and grave goods.  One of the sarcophagi was made from stone with a long inscription chiseled into it.

No one knows much about the Etruscan language, but Natalini and her team were able to make out one word that was chiseled on one of the tombs.  It read “Laris” which was actually a common Etruscan male first name.  The team had decided that the tomb must contain a male skeleton.

Natalini said that she is hoping she will be able to find out more about the male’s family by reading the inscriptions on the tomb.  She is hoping to find out the family name, the name of the man, and even the man’s age, which could all be right on the tomb. 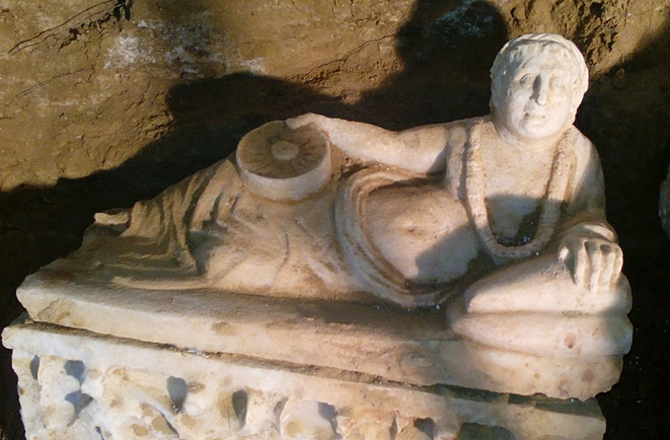 One of the reclining figures on the lid of the urn.SOPRINTENDENZA ARCHEOLOGIA DELL’UMBRIA

The other tomb was covered with painted plaster and also had an inscription, but the researchers were not able to make anything out right away. Natalini said that due to an unfortunate collapse that damaged the inscribed plaster, she and the team are not able to make out the words. She said that it is possible to make something out, but it will have to be pieced back together before they can be certain.

The coffin is estimated to be about 2,300 years old.  It is more than eight feet long and weighs about three tons. Natalini and the team said there is most likely another skeleton on the inside.

The next item the team found was a marble head which was broken at the neck level.  Perhaps the statue was a replica of what the man had looked like.  Natalini described the statue as portraying a young man.  She believes that it could have just been a statue that honored the deceased and nothing more.

The grave goods included pottery, miniature votive vases, and two ceramic jars still intact.  Natalini believes that those were used to store food for the afterlife.  She and the team also found four urns with cremated remains in them.

The urns are made of grained alabaster marble, and three of the four are sculpted.  One of the lids portrays a half-naked deceased person reclined on two cushions and sporting a flower necklace.  The small sculpture also has a ritual offering dish in its right hand.

Based on the items found in the sarcophagi, Natalini believes that the tombs belonged to an aristocratic family that was near the Etruscan stronghold of Chiusi.  After more examination of the pieces, the team plans on displaying a majority of the goods and artwork in the local museum.

« Albanian Defense Ministry to auction off 36 jets & 4 helicopters from the 1950s & 1970s
The Malagana Treasure: Discovered in 1992 and four tons of artifacts were looted in a matter of days »