Women’s basketball began in the winter of 1892 at Smith College. Senda Berenson, an instructor at Smith, taught basketball to her students, hoping the activity would improve their physical health. Basketball’s early adherents were affiliated with YMCAs and colleges throughout the United States, and the game quickly spread throughout the country.

This footage of women’s basketball from 1904 is probably the earliest known footage of this sport. 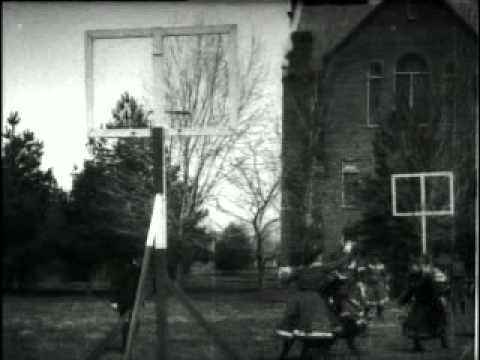 Berenson’s, freshmen played the sophomore class in the first women’s collegiate basketball game, held on 22 March 1893. University of California and Miss Head’s School, had played the first women’s outdoor game in 1892. Also in 1893, Mount Holyoke and Sophie Newcomb College, coached by Clara Gregory Baer, (the inventor of Newcomb ball), women began playing basketball. By 1895, the game had spread to colleges across the country, including Wellesley, Vassar and Bryn Mawr. The first intercollegiate women’s game was on 4 April 1896. Stanford women played California, 9-on-9, ending in a 2–1 Stanford victory. Clara Gregory Baer published the first book of rules for women’s basketball in 1895 she first called the game ‘Basquette’, a name later dropped in her first revision of rules, called Newcomb College Basketball Rules published in 1908. In 1971 five player, full court game was adopted followed by women’s sports foundation which was formed in 1974

However, Berenson was taking risks simply in teaching the game to women. She worried a little about the women suffering from “nervous fatigue” if games were too strenuous for them. And, in order to keep it “acceptable” for women to play at all, she taught modified rules. These included a court divided into three areas and nine players per team. Three players were assigned to each area (guard, center, forward) and they could not cross the line into another area. The ball was moved from section to section by passing or dribbling. Players were limited to three dribbles and could hold the ball for three seconds. No snatching or batting the ball away from a player was allowed. A center jump was required after each score. Peach baskets and the soccer ball were the equipment. Variations of Berenson’s rules spread across the country via YMCAs and colleges.

The first intercollegiate women’s basketball game was played between teams from Stanford University and the University of California, Berkeley, in 1896.

The popularity of women’s basketball grew steadily around the world for decades. By the 1970’s the sport had attracted the notice the International Olympic Committee, which added women’s basketball as an official sport of the Olympic Games in 1976. Throughout the 1970’s, funding for (and interest in) women’s basketball began to dramatically increase as schools receiving federal funding began to come into compliance with new laws mandating a lack of discrimination based on sex. The sport was also gaining attention at the collegiate level, under the auspices of the Association of Intercollegiate Athletics for Women (AIAW). A major development in women’s basketball occurred in 1982, when the National Collegiate Athletic Association (NCAA) began to sponsor the sport.. After several failed attempts at women’s professional leagues in the U.S., the NBA founded the WNBA in 1996.

« Tortures, medical and war methods, used throughout the centuries
These photos glimpse into everyday life in Bangladesh in 1958 »