“I don’t consider myself to be a hero or invincible. But I do know that the Lord was in my cockpit each time I took off, and when I was shot down.”

On April 7, 1943, on his first combat mission, Swett both became an ace and acted with such “conspicuous gallantry and intrepidity at the risk of his life above and beyond the call of duty” that he would be awarded the Medal of Honor.

His first mission was as a division leader on a combat air patrol over the Russell Islands early on the morning of April 7 in expectation of a large Japanese air attack. Landing to refuel, the four-plane division of F4F Wildcats he was leading was scrambled after other aircraft reported 150 planes approaching Ironbottom Sound, and intercepted a large formation of Japanese Aichi D3A dive bombers (Allied code name: “Val”) attacking Tulagi harbor.

When the fight became a general melee, Swett pursued three Vals diving on the harbor. After downing two, and while evading fire from the rear gunner of the third Val, the left wing of his F4F was holed by U.S. antiaircraft fire directed at the Japanese. Despite this, he shot down the third Val and turned toward a second formation of six Vals leaving the area.

Swett repeatedly attacked the line of dive bombers, downing each in turn with short bursts. He brought down four and was attacking a fifth when his ammunition was depleted and he had his cockpit shot up by return fire. Wounded, he decided to ditch his damaged fighter off the coast of Florida Island, after it became clear that his oil cooler had been hit and he would not make it back to base. After a few seconds his engine seized, and despite initially being trapped in his cockpit underwater, Swett extricated himself and was rescued in Tulagi harbor after ditching his plane. This feat made the 22-year-old Marine aviator an ace on his first combat mission. Medal of Honor action – On April 7, 1943, on his first combat mission, 22 year-old Swett became an American Fighter Ace – and acted with such “conspicuous gallantry and intrepidity at the risk of his life above and beyond the call of duty” that he would be awarded the Medal of Honor. source

Swett returned to Guadalcanal after a short stay in a Naval hospital, and learned that Admiral Marc Mitscher had nominated him for the Medal of Honor. After a short rest in Australia, Swett checked out in the Vought F4U Corsair to which VMF-221 was converting and moved to a new base in the Russells. Promoted to captain, Swett covered the Rendova landings on June 30, 1943, adding two Mitsubishi G4M “Betty” medium bombers to his score and sharing the downing of a Mitsubishi A6M “Zero”.

Eleven days later, near the island of New Georgia, Swett downed two more Bettys. Seeing his wingman’s Corsair under attack, he also shot down a Zero. However, he failed to see a second Zero and was himself shot down. He was rescued by indigenous tribal members in a canoe and traveled by ten-man canoe for several hours to an Australian coast watcher’s location. A PBY flying boat returned Swett to the Russells. In October 1943, over the major Japanese airbase at Kahili, Bougainville, Swett added one confirmed Zero and one probable, but lost his wingman. In November, he added to his list of kills 2 more Vals and a possible Kawasaki Ki-61 Tony, a new Japanese fighter.

On December 11, Swett returned to the United States on a Dutch motor ship, arriving in San Francisco on New Year’s Eve. After less than 24 hours, he shipped out to San Diego, where he was granted 30-days leave and married Lois Anderson, his longtime sweetheart. Swett was then transferred to NAS Santa Barbara, California, where he worked up a newly manned VMF 221 in the Corsair. “I don’t consider myself to be a hero or invincible. But I do know that the Lord was in my cockpit each time I took off, and when I was shot down.” – JAMES E SWETT, Colonel, USMC (Ret). source

Now carrier-qualified and assigned to the USS Bunker Hill, Swett flew two strikes over Japan and then supported the landings at Iwo Jima and the operations on Okinawa. On May 11, 1945, he shot down a Yokosuka D4Y Judy kamikaze, which he described as a “sitting duck”. Swett watched from the air as the Bunker Hill was struck by two kamikazes, causing such damage that he was forced to land on another carrier.

Swett later returned to the States and was assigned to MCAS El Toro, California, where he began to train for Operation Olympic, the invasion of Japan. At war’s end, VMF 221 was second in aerial victories among Marines Corps squadrons with 185 enemy planes downed. Swett’s combat record includes 103 combat missions, 15.5 confirmed victories and four probables. He earned two Purple Hearts, eight Distinguished Flying Crosses, and the Medal of Honor.

Swett commanded VMF-141 flying Corsairs at NAS Alameda, California, following the end of World War II. After the onset of the Korean War his squadron was deployed to Korea, but he was left behind because the Navy thought putting a Medal of Honor recipient in combat was too risky. Swett left active duty and continued service in the Marine Corps Reserve, retiring in 1970 in the rank of colonel.

He worked in his father’s company in San Francisco, making marine pumps and turbines. In 1960, after his father’s death, Swett took over the company and ran it for 23 years, before passing it on to his son. In retirement, he became a frequent speaker at schools, where he shared his strong feelings about the values of respect and responsibility. In 2006, Swett’s Medal of Honor action was recreated using computer graphics for The History Channel series Dogfights and Swett himself provided commentary. The episode first aired on November 24, 2006.

Swett moved to Redding, California in 2007 where he died on January 18, 2009, in a Redding hospital from heart failure after a lengthy illness.

The airport in Trinity Center, California was named in his honor.

For conspicuous gallantry and intrepidity at the risk of his life above and beyond the call of duty, as a division leader in Marine Fighting Squadron TWO TWENTY-ONE in action against enemy Japanese aerial forces in the Solomon Islands Area, April 7, 1943. In a daring flight to intercept a wave of 150 Japanese planes, First Lieutenant Swett unhesitatingly hurled his four-plane division into action against a formation of fifteen enemy bombers and during his dive personally exploded three hostile planes in mid-air with accurate and deadly fire. Although separated from his division while clearing the heavy concentration of anti-aircraft fire, he boldly attacked six enemy bombers, engaged the first four in turn, and unaided, shot them down in flames. Exhausting his ammunition as he closed the fifth Japanese bomber, he relentlessly drove his attack against terrific opposition which partially disabled his engine, shattered the windscreen and slashed his face. In spite of this, he brought his battered plane down with skillful precision in the water off Tulagi without further injury. The superb airmanship and tenacious fighting spirit which enabled First Lieutenant Swett to destroy eight enemy bombers in a single flight were in keeping with the highest traditions of the United States Naval Service. 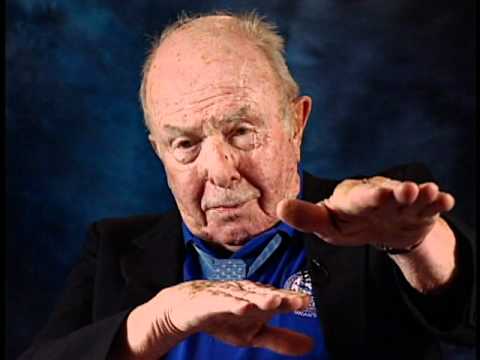 « From fattest twin wrestlers to the richest cat- 10 of the weirdest Guinness World Records of all time
Stealing Little Tramp: body-snatchers once held Charlie Chaplin’s body for ransom … »