The pink Scottish castle said to have inspired Walt Disney

There are a few reasons why Craigievar Castle in Scotland is not your ordinary country manor experience.

For over three centuries the site was owned by the affluent Forbes family. Its appearance — the pink tinted facade, finely sculpted multiple turrets, ornate corbels and carved stonework — is said to have been an inspiration for Walt Disney’s Cinderella Castle.

An imposing sight, Craigievar has attracted all kinds of onlookers and visitors over the years, even royalty. Queen Victoria was one of them. 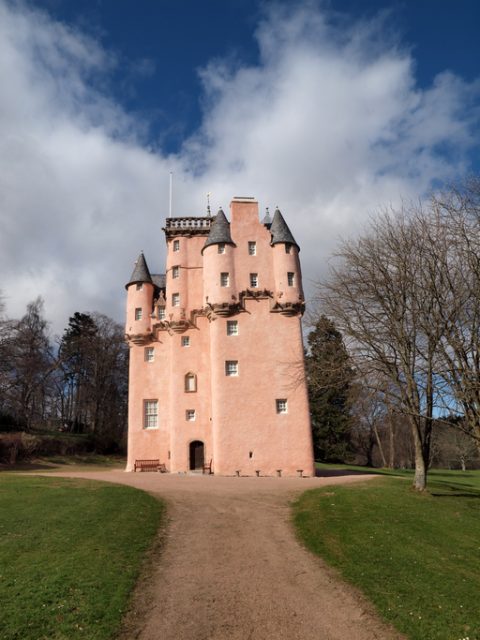 Craigievar Castle in Aberdeenshire, Scotland. It was given it’s pink color by Sir John Forbes who inherited the castle in 1824.

The queen was in fact neighbors with the castle, having her Balmoral residence not too far away. On June 18, 1879, she decided to pay an unannounced visit to the alluring pink castle, describing it as a strange and curious place.

Castle tenants must have been pleasantly surprised by such a visit. 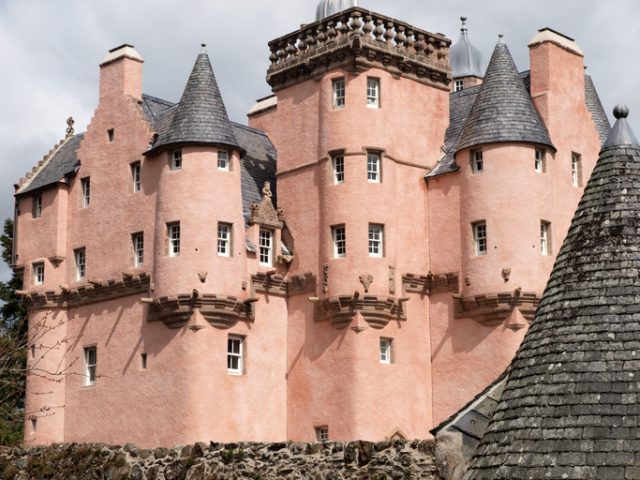 Craigievar Castle in Aberdeenshire, Scotland. The most recent renovations were completed in 2010.

Situated in charming countryside scenery of rolling hills and beautiful woods, Craigievar Castle hides in Aberdeenshire, in the northeast of Scotland. 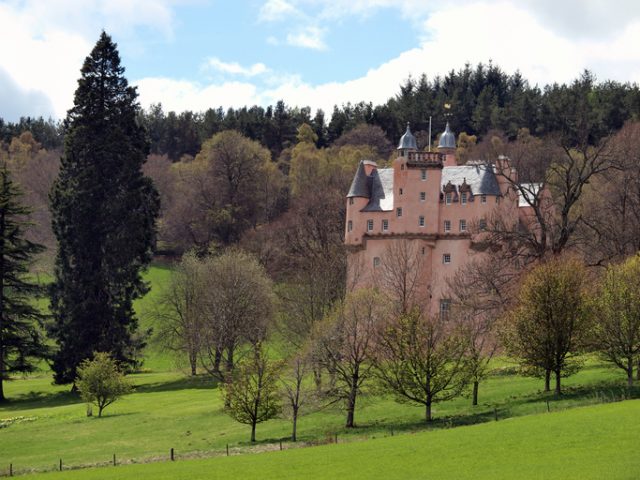 The “strange and curious old castle” was visited by Queen Victoria and Prince Albert in June 1879. They dropped in unannounced and, finding no-one home, let themselves in to take a look around.

The Scottish Baronial style edifice can be reached via a single track road that runs from the Scottish village of Alford, just a few miles away.

The castle began as a much simpler tower house, although the L-shaped design was unique for Scotland at that time. It was built by the Mortimers of Craigievar during the late 1500s. The main house, courtyard, and ancillary buildings were all surrounded by an outer defensive wall. 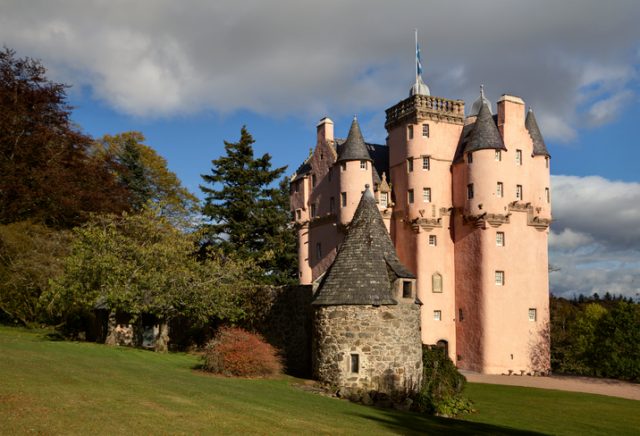 Local lore tells that the kitchen is haunted by the spirit of a fiddler who drowned in the well.

Ownership of Craigievar Estate came to the Forbes family in 1610. William Forbes of Menie, who had made his fortune as a merchant, trading goods between Scotland and the Baltics, purchased Craigievar and decided to spend a huge chunk of his wealth renovating the castle.

He deconstructed the existing towers, added extensive stone corbelling on top of the forth story, and topped it off with the wonderful collection of towers, turrets, and viewing platforms that we can see today. The work was completed by 1626. Thanks to subsequent restoration efforts, much of the place is kept as it was in his days. 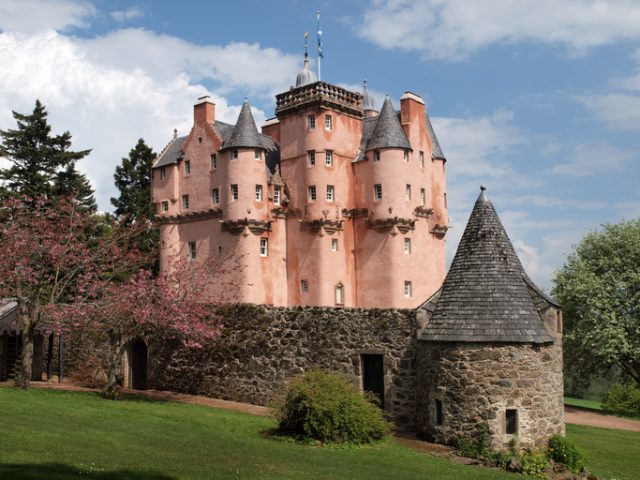 The Forbes’ used Craigievar as a holiday residence and tourist attraction until the beginning of WWI, when their main family home, Fintray House, was requisitioned for the war effort, so they moved into Craigievar Castle full-time.

Craigievar Castle retained it’s status as family residence after the war came to an end, an idiosyncratic mixture of warm interiors with exceptional artifacts and fine art secluded within its age-old walls, which are rounded at the corners. 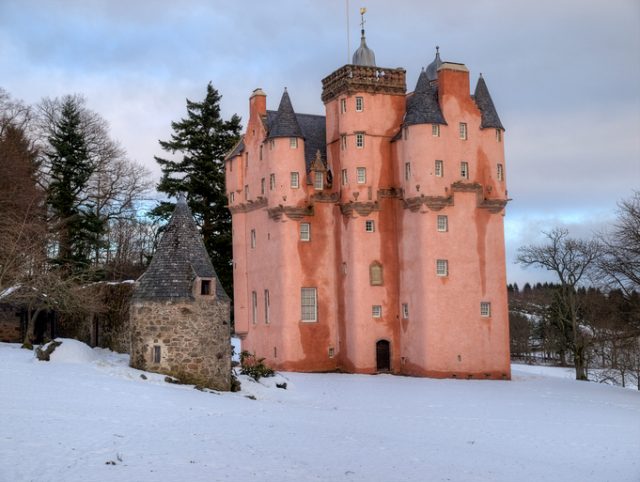 But the Forbes family found it difficult to maintain the aging building and began to yearn for a more modern home. The National Trust for Scotland took over running the estate in the 1960s. 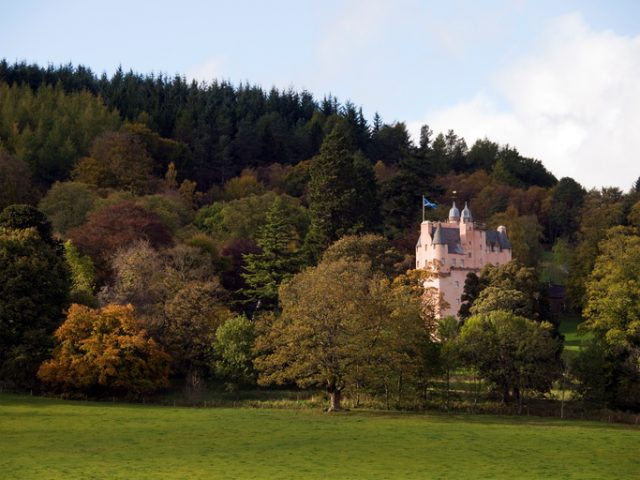 Aside from it’s alluring exterior, Craigievar Castle has exceptionally gorgeous plasterwork ceilings inside. From the vaulted hall on the first floor to the many bedrooms and chambers, all are ornately decorated. The main hall also has a hefty fireplace with the royal coat of arms above and various other carvings.

Any castle worth it’s salt has a ghost story or two and Craigievar is no exception. 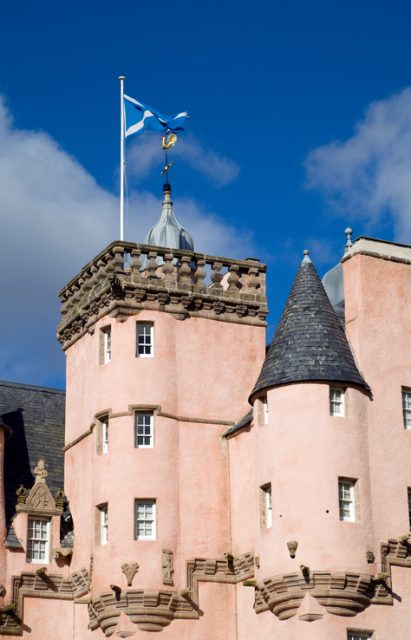 The Scottish National Flag, the Saltire or St. Andrews Cross, flying from the top of Craigievar Castle, March 18, 2012

One of these spooks is said to haunt the Blue Room. He supposedly is the spirit of a man from the rival clan Gordon who was pushed from the window by John Forbes.

Visitors may also get a tingle down their spine in the kitchen, where a musician drowned in the well. 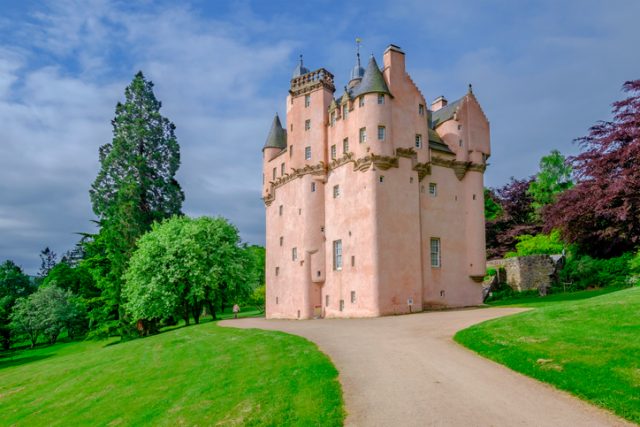 Craigievar Castle is a tall and slender building with a massive lower structure surmounted by turrets and carved stonework.

There is no electricity above the first floor so castle-goers are left with the real feel of the castle. The numerous arms and armors, historic artifacts, and paintings can be explored in the natural daylight through the windows, exactly as it was intended by William Forbes. 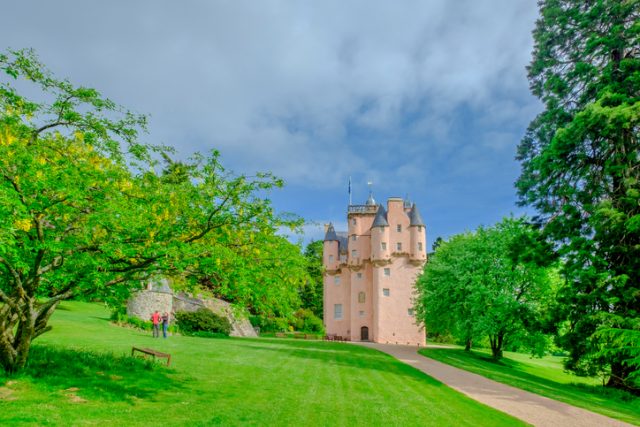 Visitors explore the grounds on a summers day.

Over its lengthy history, the castle has been renovated more than once. The first time was by by Sir John Forbes who inherited the castle in 1824. As well as repairing the roof, he had the harling (a traditional Scottish lime-based protective outer coating for the stone building) replaced.

Instead of the original cream color, the architect suggested adding a pigment — the castle was turned pink and has been kept that way ever since. 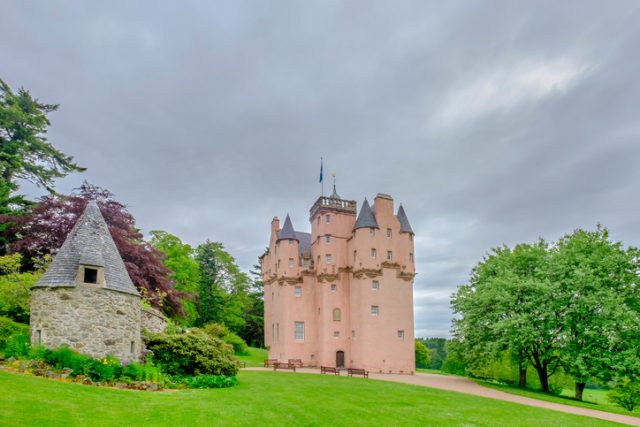 Around the castle there are the scenic rolling foothills of the Grampian Mountains.

John was careful to preserve as much as possible of the original furniture and paneling around. When the renovation effort was completed, Craigievar gained such an authentic look that it would lure visitors from afar. 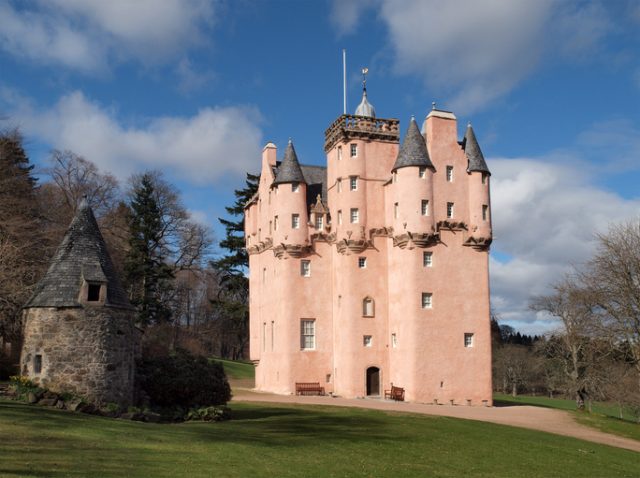 Subsequent renovations were undertaken by the National Trust. In 1973 the building was again reharled but with a concrete-based mix.

This turned out to be a mistake. The new coating almost caused irreparable damage to the walls that it was supposed to protect from the harsh climate. It didn’t allow the walls to breathe, so damp began to build up. Also it it was less flexible than the traditional lime harl and began to crack, allowing rain to seep in.

In late 2007 the castle was officially shut down to undergo extensive preservation work. 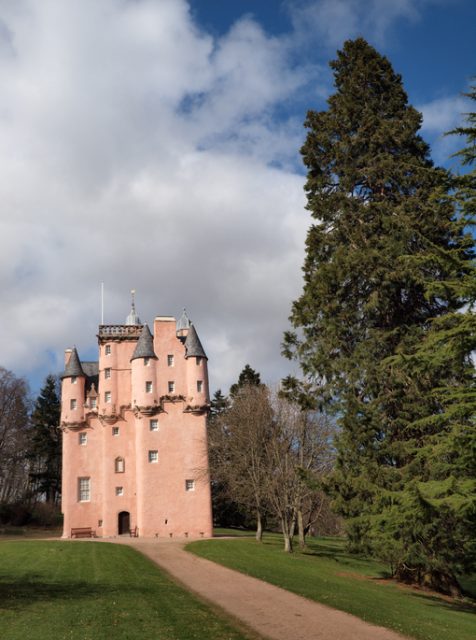 When the concrete harl was removed, the carved stone corbels were revealed for the first time in 30 years. A new coating using old methods was applied by hand to the building, and the interior was also renovated.

When the castle reopened in 2010, there was also a renewed policy to limit the number of visitors allowed inside at any time.

Craigievar Castle remains one of the most beloved sights across all of Scotland.