The legend of the sword Excalibur is an exceptional worldwide legend with a narrative that has obviously withstood the test of time from its emergence in Medieval times until today.

There are many versions of the multilayered story of Arthur Pendragon, Guinevere, Merlin, and the Knights of the Round Table that have developed over the centuries. But the myth of the hero-warrior has endured and is an influential piece of British heritage. After the tales caught the imagination of one seven-year-old schoolgirl, she made a discovery that seemed to turn the legend into a modern-day reality.

As a tiny reminder, Excalibur is the sword of King Arthur, a legendary British king who appears in medieval British romances as the leader of the fellowship known as the Knights of the Round Table.

Arthur was given Excalibur by the mythical “Lady of the Lake” as a lucky charm that would bring him strength in battles as well as good fortune. 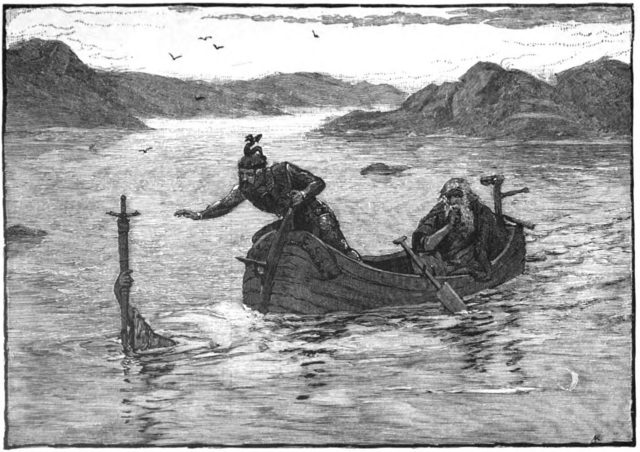 The Lady of the Lake offering Arthur Excalibur, by Alfred Kappes (1880).

Arthur lost his life in the Battle of Camlann and, according to the legend, Sir Bedivere returned his king’s sword to the lake. The mystery around the figure of Arthur still remains and it is not certain whether it was based on an actual person. Historical researchers have proposed a few different theories about the factual basis of the stories.

A similar uncertainty goes for Excalibur as it unknown if it was an actual object for combat or an element which embellished the Arthurian legends and symbolized power and strength.

The origins of the legend are determined as Welsh or Celtic, deriving from Wales or northern Britain. 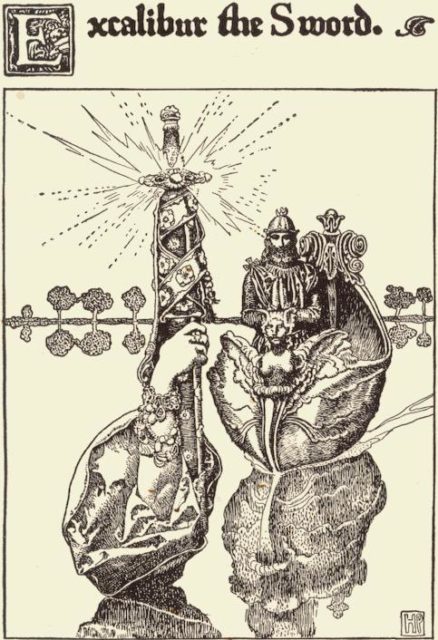 In the 15th century, the popular work of Sir Thomas Malory named Le Morte D’Arthur tells his version of the tales of King Arthur. Malory’s accounts tell the story of how Merlin, Arthur’s magical advisor, requested the sword to be given to Arthur after his first sword (the one he pulled from the stone) was broken.

Other historical records name the sword as “Caliburnus,” some examples being the 12th century book History of the Kings of Britain as well as several ancient poems written by Chretien de Troyes around 1160. In these poems, Excalibur is in the possession of Sir Gawain, the son of Arthur’s half-sister, Morgause.

Sir Gawain was regarded as the most loyal and honored knight of King Arthur and the only one with the privilege to use the sword Excalibur in battles. 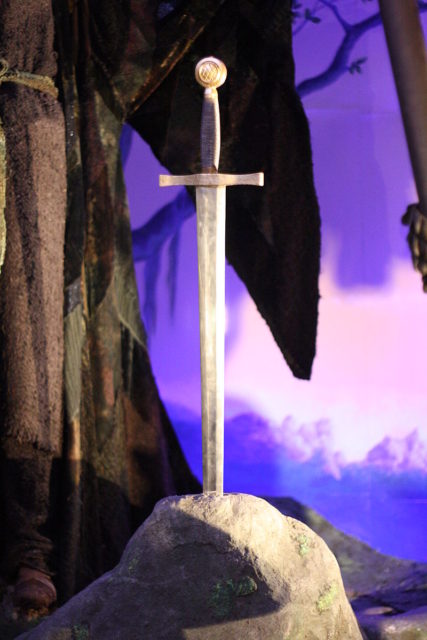 Excalibur from the 1981 film Excalibur at the London Film Museum. Photo by Eduardo Otubo CC BY 2.0

The brother of Sir Gawain, Mordred (Medraut), is the leading villain in the Arthurian legends, who fought with Arthur in his last battle. The battle is mentioned in an entry dated 537 from the 10th century historical compilation Annales Cambriae:

Gueith Camlann in qua Arthur et Medraut corruerunt.
“The strife of Camlann, in which Arthur and Medraut fell.”

Arthur told his knights that whatever the battle’s outcome, the sword must be taken back to the Lady of the Lake. Sir Bedivere reluctantly follows this order and throws Excalibur into the lake. The hand of the Lady emerges from the water, catches it and sinks back into the depths. 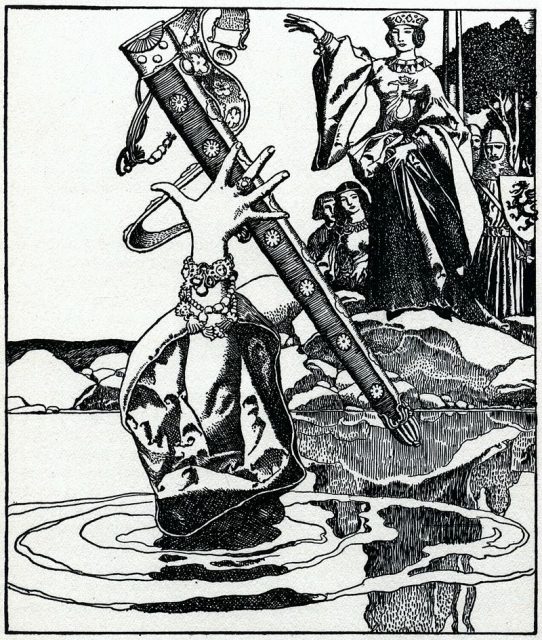 There are several candidates hailed to be the Excalibur lake; one of these is Dozmary Pool on Bodmin Moor, Cornwall.

On a hot late-summer day in 2017, the Jones family from Yorkshire, who were on vacation in the area, took a day trip to Bodmin Moor. Mr Jones is a great admirer of Arthurian legends and enjoyed telling them to his children, so they paid a visit to the lake. 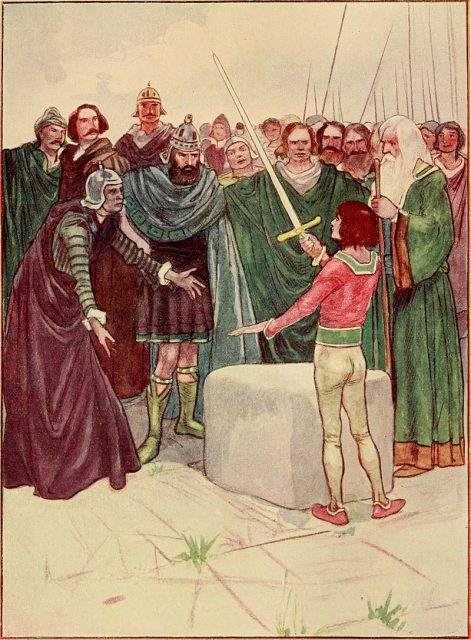 Arthur pulls the sword from the stone in an early-20th century illustration.

In the legend, the lake is bottomless, however Dozmary Pool is known to be just a few feet deep. On such a hot day, his seven-year-old daughter could not resist stepping into the shallow pool to cool off. Waist deep in the water, Matilda made a discovery. She had spotted a sword on the bottom of the lake!

Mr. Jones was convinced that she was just overwhelmed with impressions from the story, but when he went over to look, there really was a four-feet-long sword laying in the mud. 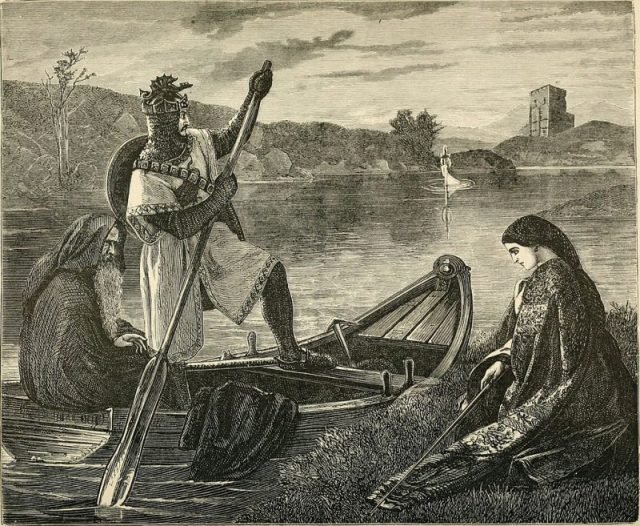 The sword from the Lady of the Lake in a late-19th century illustration.

It was not heavy enough to be a real medieval sword. Mr. Jones guessed it was an old film prop — excluding the possibility of his young daughter being the lucky finder of Excalibur and the future Queen of Britain.

Later it was confirmed that the sword that Matilda discovered was definitely not the real Excalibur, according to Mark Wilkins, who claims he put the sword in the Cornish lake sometime in the 1980s, as an offering to Celtic gods.

Read another story from us: Joyeuse, King Charlemagne’s legendary sword, was said to change colors 30 times a day

“Back in the 80s I was very into spiritualism and followed the Celtic religion. It’s well known in Celtic belief that if you want to honor the Gods you can make a sacrifice or an offering.” Wilkins told Cornwall Live.

All in all, the legend of Arthur and Excalibur will apparently never stop resonating and prompt hope, excitement, and imagination even in modern times.