Simon, the cat crusader who served aboard HMS Amethyst, received three medals after being wounded

Cats are intelligent and adaptive predators with a strong natural instinct for hunting and eliminating rodents. Because of this, they have been used on numerous ships across the world as killers of rats, mice, and various other disease-ridden pests.

The concept of a “ship’s cat” has been around since ancient times; aside from being hailed as efficient exterminators, cats have also been known to provide stress relief and a sense of companionship to sailors far away from home.

Simon, the cheeky black-and-white cat who served aboard the Royal Navy frigate HMS Amethyst, became one of the most famous ship’s cats in history after being wounded during the Yangtze Incident. 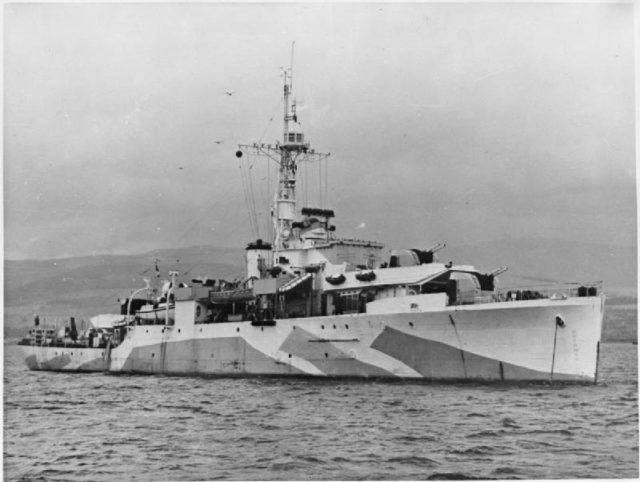 In the late 1940s, the Amethyst was stationed in China; in March of 1948, a 17-year-old crewman named George Hickinbottom found a malnourished cat somewhere on the docks of Hong Kong. He named the cat Simon and smuggled him onto the frigate. Although some of the crew were initially skeptical of Simon’s presence on the vessel, the one-year-old cat soon proved its worth as a capable pest exterminator on the lower decks.

In October 1948, the commander of the Amethyst, Ian Griffiths, was replaced by a new commander, Lieutenant-Commander Bernard Skinner. By that time, Simon had already acquired a reputation as the ship’s furry mascot; the new commander liked Simon so much that he granted him a few additional privileges, such as unrestricted access to most areas of the ship and the permission to sleep in the commander’s cap. Over the next six months, the cat became a lovable and irreplaceable companion to the sailors, and even occasionally treated them to a grim gift in the form of a dead rat on their pillow. 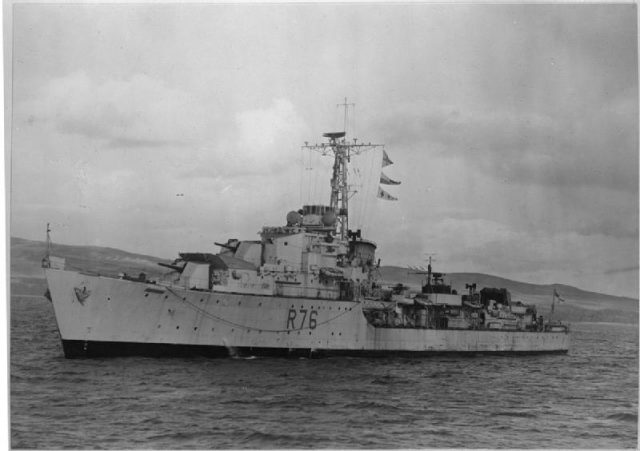 Unfortunately, Simon’s carefree life aboard the Amethyst didn’t last very long. In April 1949, things turned ugly for both the crew and their feline friend. The vessel was tasked with traveling up the Yangtze River to the port of Nanjing to replace the duty ship there. Halfway up the river, the Amethyst unexpectedly found herself under artillery fire by the Chinese People’s Liberation Army. One of the first rounds that hit the ship destroyed the captain’s cabin, killed Lieutenant-Commander Skinner, and gravely injured the unwitting Simon.

The ship was quickly surrounded by Chinese troops; it became evident that an escape attempt was impossible. For the next four months, the crew were stuck in unfamiliar waters, unable to negotiate a safe passage back to the open sea, and had to treat their wounded with limited medical supplies.

Still, the medical officer managed to extract the four pieces of shrapnel from Simon’s back, and the cat was soon roaming the ship with the same vigor. In a time of uncertainty and grave danger, he boosted the crew’s morale and prevented them from losing hope. 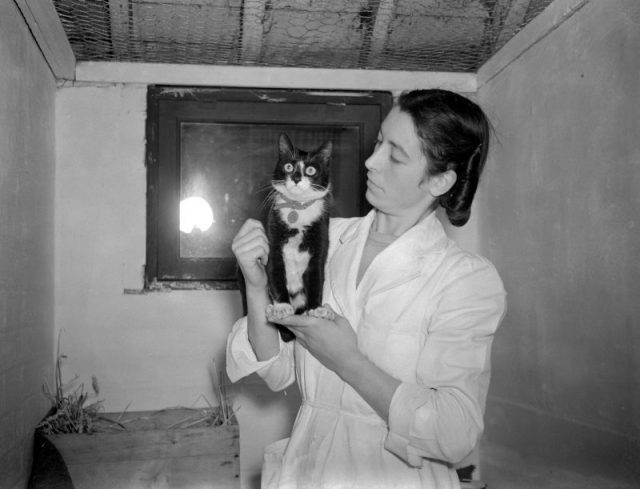 Simon the cat received the Dickin Medal, for catching rats and protecting food supplies during the time the ship was trapped by the Chinese. (Photo by PA Images via Getty Images)

On the night of July 30th, the Amethyst finally managed to escape with the help of bad weather and limited visibility. On the way back to the United Kingdom, the ship stopped at many ports and the news of the cat who brought hope and tranquility to the sailors spread across the world.

Upon return to Plymouth in November, the cat was presented with the Amethyst campaign medal, a Blue Cross medal for animal bravery and heroism, and the Dickin Medal, the animal version of the Victoria Cross, the highest award of the British honor system. To this day, Simon remains the only cat to have been awarded this particular medal. 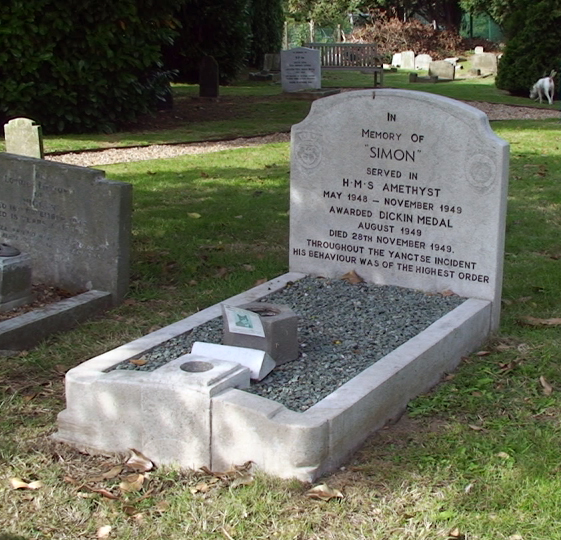 Like all animals entering the United Kingdom at the time, Simon had to spend some time in quarantine. Unfortunately, during his second week of quarantine, he developed a severe infection which was a result of the wounds he sustained during the Yangtze Incident.

He died several days later, at the age of two. Nearly a thousand people, including the entire crew of HMS Amethyst, attended his funeral. The inscription on his gravestone at the PDSA Ilford Animal Cemetery states, among other things, the following: “Throughout the Yangtze Incident his behavior was of the highest order.”