The question that persists when learning about the persistent legends that cling to Old Alton Bridge could very well be…why?

Why would a demonic entity haunt a rarely used country bridge in Denton, Texas? Since the answer isn’t likely to be definitively answered anytime soon, let’s settle into the story of Goatman and his favorite bridge.

Less than four miles from the town of Corinth, in Denton County, there once existed the village of Alton, founded in 1848. It was not exactly a metropolis. “The only residence that existed was that of a man named W.C. Baines, who established a farmstead long before the designation of the new county seat,” according to the site legendsofamerica. 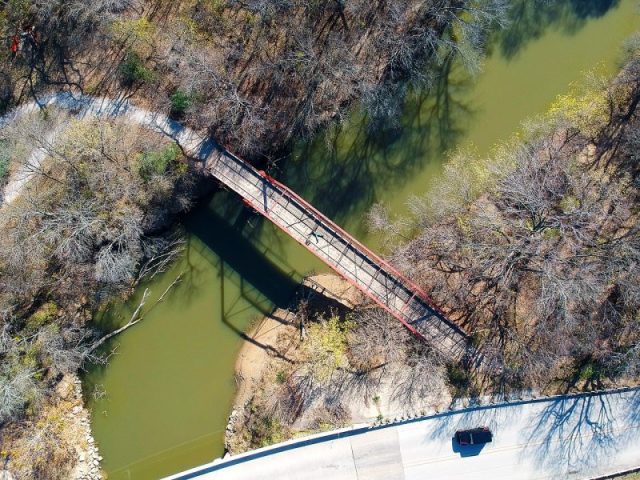 A drone shot from above Old Alton Bridge – Goatman’s Bridge – showing the span over the waterway and a single man laying on the bridge for reference. Photo by Pixelsyndicate CC BY-SA 4.0

The site of the town shifted over and by the 1850s it boasted a number of homes, a blacksmith shop, three stores, a school, saloon, hotel, two doctors, and a few lawyers. The Hickory Creek Baptist Church was built in 1855.

But when the county seat moved farther away, Alton petered out again. Nonetheless, in 1884 an iron bridge was built over Hickory Creek on Copper Canyon Road, south of the old townsite. Built by the King Bridge Company of Cleveland, Ohio, the 145-foot-long bridge would serve until 2001, when it was replaced by a modern, shiny concrete-and-steel bridge and a new road. It was closed to car traffic and is open only to pedestrians today. 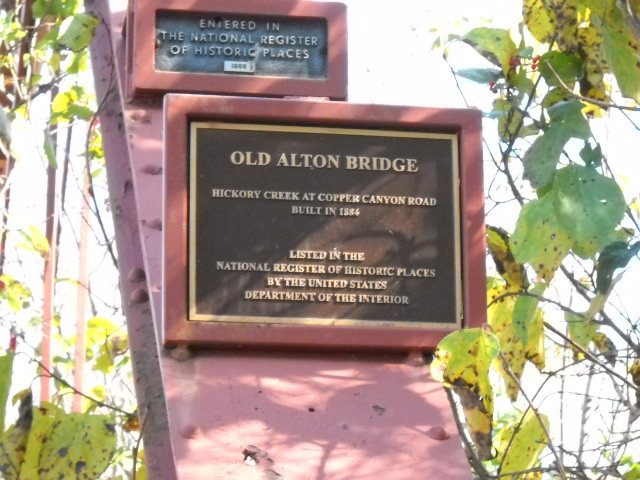 Signage for Old Alton bridge. Photo by Ron CC BY 2.0

And the Goatman. Don’t forget him. The first time someone reported something strange on Old Alton Bridge was 1938.

“A number of strange things have reportedly occurred on and around the bridge,” according to legendsofamerica. “Many believe that the Goatman haunts the overpass and the nearby woods. The tale continues that when travelers crossed the bridge at night with their headlights off, they would meet the Goatman on the other side. These tales are obviously old, as the bridge has been closed to vehicle traffic since 2001.” 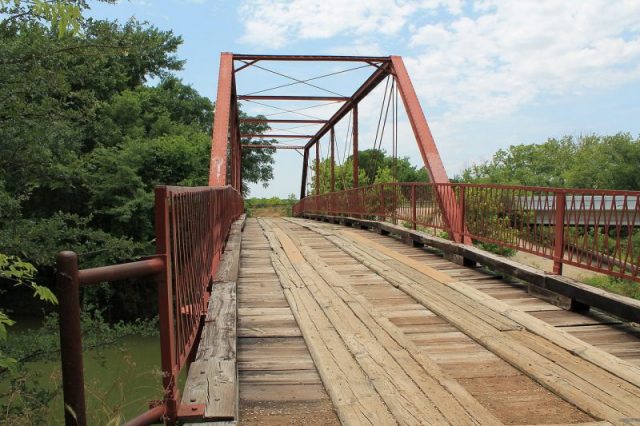 Supposedly numerous abandoned cars that have been found near Old Alton Bridge, their owners strangely missing.

“Others report seeing a ghostly man herding goats over the bridge, while others say they have seen an apparition staring at them, holding a goat head under each arm. Stranger stories even include people having seen a creature that resembles a half-goat, half-man.” 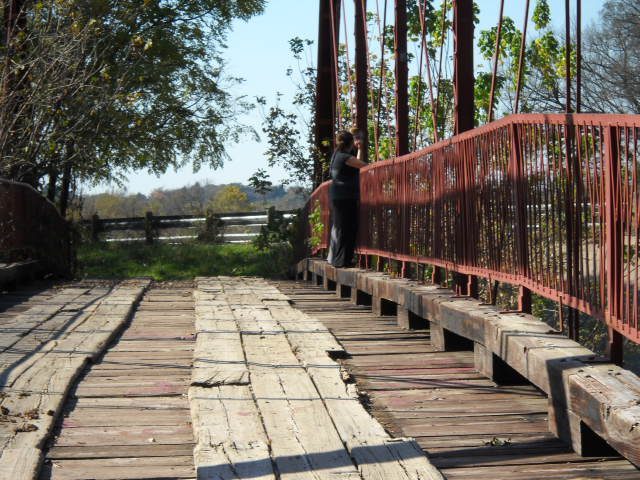 The stories have grown so persistent that TV crews have showed up, including one from “Buzzfeed” and another from “Ghost Adventures” on the Travel Channel.

The curious come to hear the noises. People say they’ve heard horses’ hoof beats on the bridge, “splashing in the creek below, maniacal laughter, and inhuman like growling coming from the surrounding woods.”

The legend keeps growing, Texas sources say. The Old Alton Bridge made the Dallas Observer‘s 2015 list of “10 Stops to Make on a Creepy Tour of Dallas.”

The Dallas Observer reports, “One theory is that Goatman is the spirit of a goat farmer who was lynched by the KKK near the Old Alton Bridge. Another story is that satanists performed rituals on the bridge, opening a gateway to another realm.” 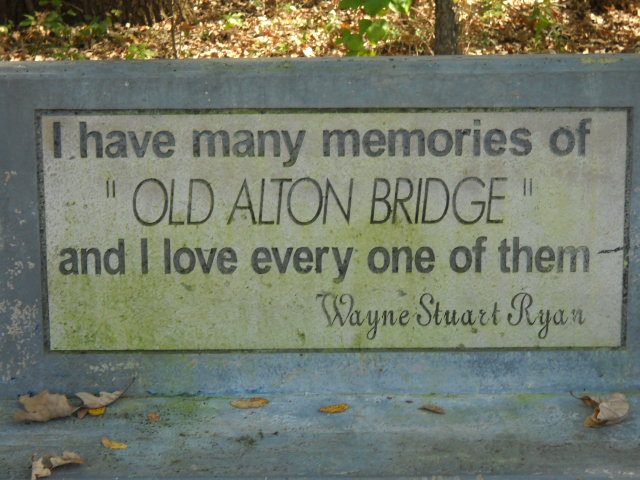 Sign from the seating area. Photo by Ron CC BY 2.0

The trouble with these sources is that there is no historical record of such a lynching.

The travel site trailsofdentoncounty says, “While the true history of the bridge is interesting, it has also gained a reputation as a haunted place for as long as local residents can remember, always being the spot that kids would flock to on Halloween night in hopes of capturing a glimpse of a ghost who traversed the area late at night. The legend says that if you go to the bridge and honk your car horn twice at midnight, the ghost’s fiery red eyes will appear on the bridge.” 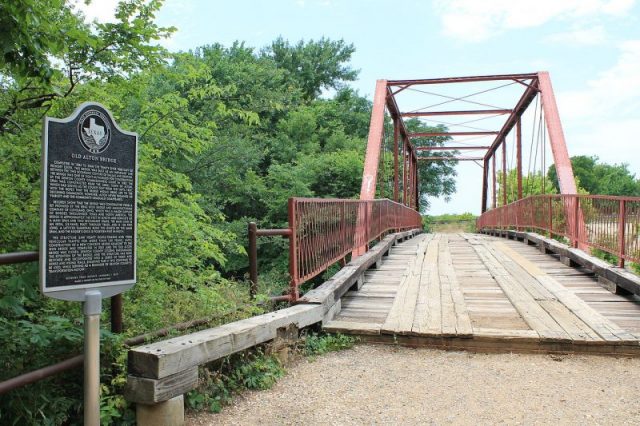 Another Texas blog elaborates on the possible terrors to be experienced: “Local legend says if you knock on the steel bridge three times at midnight, or perhaps turn off your car lights and honk three times in summons, then you dare a visitation from the vengeful Goatman that’s preceded by the stench of decaying flesh. Numerous reports tell of unholy glowing eyes that burn red from the darkness, eerie glimpses of a large snarling Goat-headed man-beast stomping in the wooded shadows, or a frightening apparition of a maniacal Satyr carrying the heads of goats or humans in his hands.”

Let it be said that when the cameras were rolling for the TV crews, the Goatman decided not to growl, glow, stomp, or appear near Old Alton Bridge carrying a head. But the legend shows no evidence of fading away.

« ‘The Crow’ Actor Michael Massee fatally shot the son of Bruce Lee on the set of the Crow
The devil is in the details: Take a closer look at the controversial sculpture of Lucifer »