The First Leisure Canoes were Made of…Paper

The late 19th century in the United States has been called “The Gilded Age.” The Civil War had ended, the American Industrial Revolution was in full swing, new incredibly abundant resources were being found, millionaires were being made seemingly overnight, and a new group was emerging – the American Middle Class.

In New England, the Eastern Seaboard, and parts of the West, larger and larger numbers of people were escaping poverty. As people became more prosperous and labor laws began to change which gave people more “free time” or “leisure time” (two new terms at the time), industries arose which catered to the leisure activities that Americans were becoming interested in.

One of these interests was boating for pleasure, and in Troy, New York, a father and son developed new types of canoes and other pleasure craft, which for a time were the most popular boats in the country – and they made the pair rich. These boats were made mostly of… paper.

Troy, as viewed from across the Hudson River looking east, c. 1909.

In the early 1800s a hard-working Vermonter named Elisha Waters moved to Troy and after a period of apprenticeship, opened his own pharmaceutical company. Mr. Waters made enough money to begin another business, that of box manufacturing. At the time, Troy was one of the richest and most industrial small cities in the country, and local industries and retailers needed boxes for shipment and delivery. Elisha Waters soon became quite rich.

It’s hard to believe now, but in the 19th century, mass production of paper from wood pulp was a relatively new thing. Previously, sheets of paper had been made by hand — a laborious and expensive proposition. That expense was passed on to the consumer – one reason why students in most schools used to write on “slates,” not paper. Until the mid-1800s, paper was made from linen or cotton rag, but in the 1850s, inventors/chemists had developed a way to free the cellulose from wood and produce it in rolls. The Gilded Age was sometimes known as “The Age of Paper.” 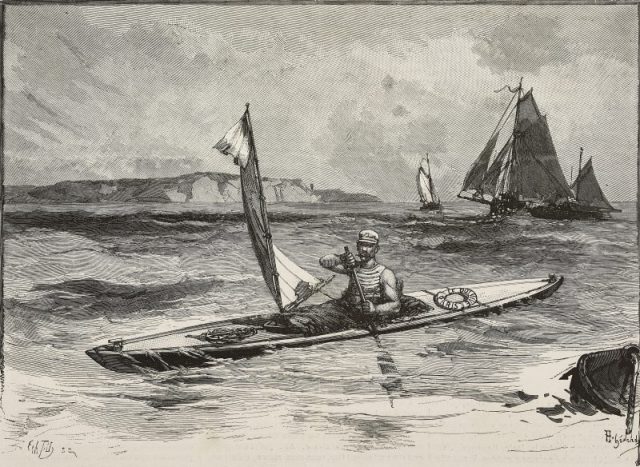 Canoe made from paper, France, illustration by Tilly from L’Illustration, Journal Universel, No 2272, Volume LXXXVIII, September 11, 1886.

One day in the late 1860s, Waters’ teenage son George was invited to a masquerade party, but the mask he wanted (an over-sized head) was out of his price range (George being given an allowance by his prosperous father, not an expense account). Suddenly George had an idea – he talked his way into borrowing the mask for a few hours, took it home, and cleverly used it as a mold for his own paper copy, which was made from layer upon layer of thick paper made hard with a combination varnish/glue. This gave him another idea, which would make both he and his father very wealthy.

George, like many other upper-class boys of the time, was involved in competitive rowing. His boat was a cast-off from a famous rower, but it had developed leaks. Fresh off his success in creating his mask with hardened paper, he used the same method to patch the holes and cracks in his boat. To his amazement, when he put the boat in water – no leaks. 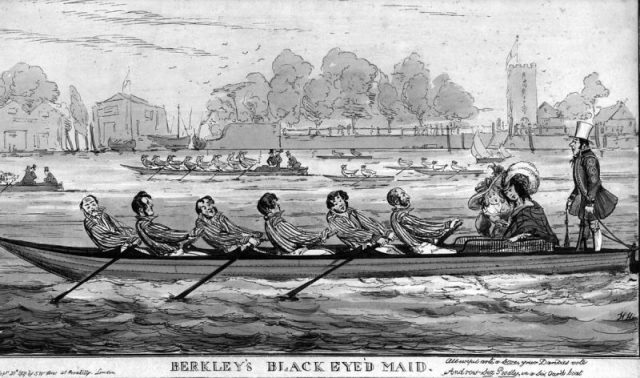 Fresh off that success, George went to his father with his idea. Soon, the pair were manufacturing canoes, competitive row-boats and eventually, large pleasure craft, including one model which had a seventeen passenger/six rower capacity and was forty-five feet long. The best part was that the Waters’ owned the patent for “paper boats.” By the late 1870s, father and son were quite rich.

The process of making the boats was relatively simple. The Waters’ built both custom-made and mass-produced boats. The manufacturing process was essentially the same for all of the boats, however. First, a wooden frame would be made. The frame had grooves in it for a wooden keel to be fastened later, as well as grooves/spaces for the gunwales (the top edges of the hull). The frame would be placed on a building platform upside-down, and so-called “tacking strips” would be attached to the bottom (really the top) for a time – this enabled the paper to be stretched over and fastened to the mold.

Enthusiasts Made A House Boat Of 100% Recycled Cardboard

For most of the boats, the competitive rowing boats known as “racing shells,” the Waters’ used more expensive but high-quality manila paper, which was made from Manila hemp. Layer upon layer would be added, each of them one piece running down both the length and width of the frame, alternately. The very first sheet of paper would be slightly damp to mold exactly to the frame. Then it would be given a coat of adhesive, and another layer of paper added. 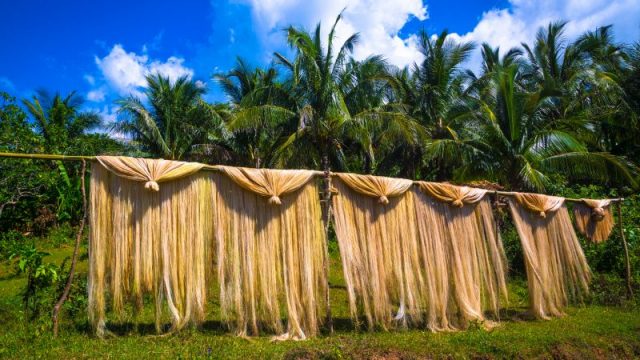 Then it would be moved to a heated room to dry. Once dry, the shell would be removed from the mold for finishing. The frame was left behind, and the keel and gunwales added. Then the father and son used a patented and secret water-proofing mixture to make their craft watertight, added a hardened paper deck and put in the proper hardware – such as oar-locks, etc. When the rowing shell was finished, it was only a foot wide, and was much much lighter than an equivalent wooden shell. The hull of this craft measured anywhere from 1/8 to 1/10 inch thick.

The light weight of the craft resulted in both increased speed and portability. Within a short time the boats were accepted by competitive rowing clubs and college teams. Amateur canoeists and adventurers were soon ordering boats, and Waters & Sons (the official name of the firm) was getting free “PR” nation-wide. In 1872, one man endeavored to paddle the length of the Mississippi River in a Waters’ craft. He made it from Minnesota to St. Louis before he quit – not because of any problem with the boat, but because he was tired. 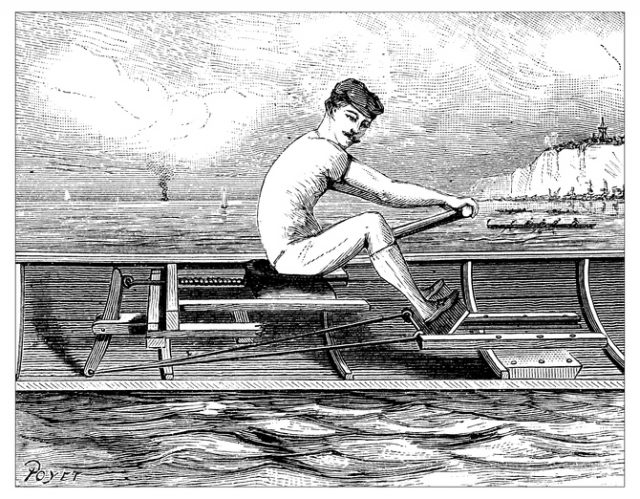 In 1874, a man named Nathaniel Bishop ordered an 18-foot Waters’ craft which had a small sail, and places for two men to row. Bishop and a companion traveled from Troy via river and canal all the way to Cedar Key, Florida. He wrote a best-selling book titled The Voyage of the Paper Canoe about the journey.

By the end of the century, Waters and Sons had branched out into other areas using their patented technology, which most successfully included the building of hardened, weather-proof paper domes on some of the new buildings going up throughout the Northeast and eastern Midwest. This included a dome atop the new observatory at West Point.

Read another story from us:  The Flying Dutchman – The ghostly ship doomed to sail the Seven Seas forever

Unfortunately, success didn’t last forever. In 1901, George Waters was building a racing-shell and while using a blow-torch, accidentally set fire to the entire factory. It was a total loss. Within three years, both father and son died, and with them, Waters’ Paper Boats. Obviously, over time most recreational boats were (and are) made from fiberglass and other stronger and lighter materials.

« Time Bandits are Back! Terry Gilliam’s 1981 Cult Classic Planned as a TV Series
A Hard Day’s Night (in Jail) – Paul McCartney Arrested for Arson in 1960 »