Vikings prompt thoughts of huge, muscled warriors pillaging up and down the coasts of northwestern Europe. But who were they, really? They were Swedes, Norwegians, and Danes — mostly farmers, traders, blacksmiths, and craftsmen, according to History on the Net.

The men who went on raids didn’t do it year-round: they took to their boats during the summers to do their raiding, while their wives kept the farms going. They were usually home for the harvest. 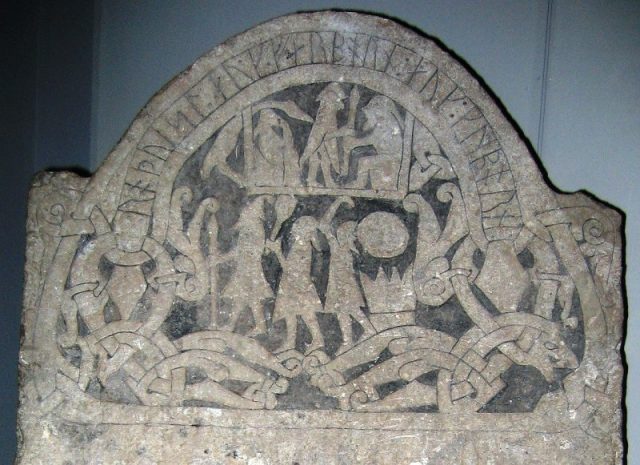 Detail from runestone G 181 in the Swedish Museum of National Antiquities in Stockholm. The three men are interpreted as the Norse gods Odin, Thor, and Freyr.

Vikings had law and government, and Viking women had more basic rights than most women in Europe at that time. They were a complex and colorful society… And they practiced human sacrifice.

According to the National Museum of Denmark, there have been several long-standing and horrible accounts of sacrifice in the Viking Age. 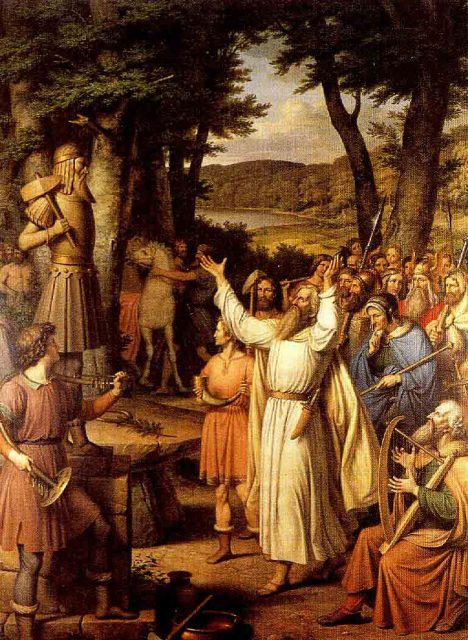 A goði leads the people in sacrificing to an idol of Thor in this painting by J. L. Lund.

The 10th century holy man and jurist Ahmad Ibn Fadlan described the “violent, orgiastic, drunken spectacle” of Viking religious ceremonies. Ancient Origins goes on to say that in the Viking tradition, if a chief died, he was placed in the ground while his burial clothes were prepared for 10 days, during which his followers drank and had sex with doomed slave girls “purely out of love.”

A German Bishop described how Vikings met every nine years at Lejre, on Zealand, Denmark, in January.

He said they “offer to their gods 99 people and just as many horses, dogs, and hens or hawks, for these shall serve them in the kingdom of the dead and atone for their evil deeds”.

Another German monk wrote a similar description in 1072 about the sacrificial tradition at Gammel Uppsala in Sweden, saying that, to ensure the goodwill of the gods, the Vikings met there in a holy grove every nine years to sacrifice nine males of all kinds of creatures. He said that horses and men hung from trees.

The Royal mounds of Gamla Uppsala in Sweden from the 5th and the 6th centuries. Originally, the site had 2000 to 3000 tumuli, but owing to quarrying and agriculture only 250 remain. Photo by OlofE CC BY-SA 3.0

How trustworthy these accounts are is a matter for debate. Neither man ever actually saw such activities occurring, and both were writing in the late Viking period and early middle ages, when Christianity was gaining an increasing foothold in Scandinavia, and human sacrifices were no longer considered acceptable. For this reason, some scholars have attributed these accounts to fabrication and propaganda.

Check out 10 things you may not know about the Vikings:

Recent archaeological discoveries, however, clearly establish that there was a tradition of human sacrifice among the Vikings. Real Clear Science relates the discovery of a gold neck ring which led to the discovery of what would become a major excavation site near Tisso in Denmark. That turned out to involve one of the largest Viking settlements in Northern Europe. 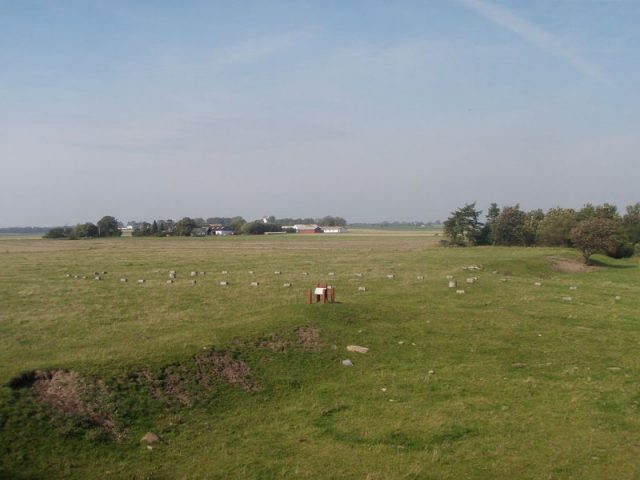 The site is thought to include a royal residence, and since its discovery in 1990, more than 12,000 items have been found that suggest that this was a very active and prosperous settlement. At this site, there is a wealth of ritual facilities and sacrificial sites around the chieftain’s residence.

In 2011, scientists found a place at the highest point of the site where there was evidence that people ate ritual meals, and jewelry and human bones were found, suggesting ritual sacrifice. This had scholars revisiting old theories about some other peculiar sites at Trelleborg, Sweden.

At Trelleborg a sacrificial site was discovered, in the form of five wells, each about 10 feet deep. Each well held the skeletons of animals and humans, along with tools and jewelry. Of the five human sacrifices that were found, four of them belonged to children between the ages of 4 and 7. 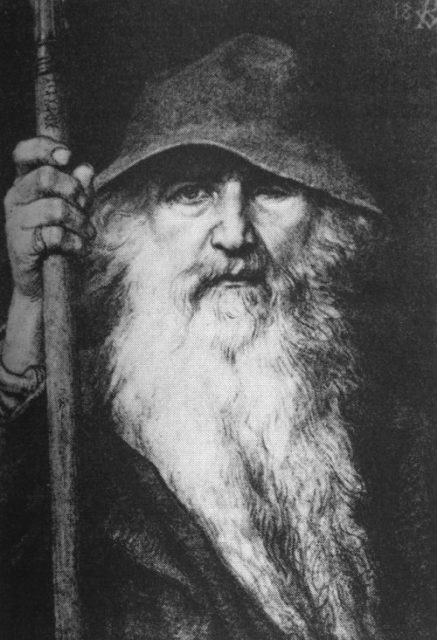 It’s considered significant that the bodies were found in wells, as Vikings considered wells to have great importance. The Norse god Odin was said to have gained wisdom by drinking from Mimir’s well, although he had to sacrifice one of his eyes to do it. Imagine what sacrificing an entire person would say to their gods, instead of just one eye.

Not all human sacrifices were made to the gods, either. Live Science reported that in Flakstad, Norway, the remains of 10 different people were found in multiple graves. There were two or three bodies in some of the graves, and some of them had been decapitated. 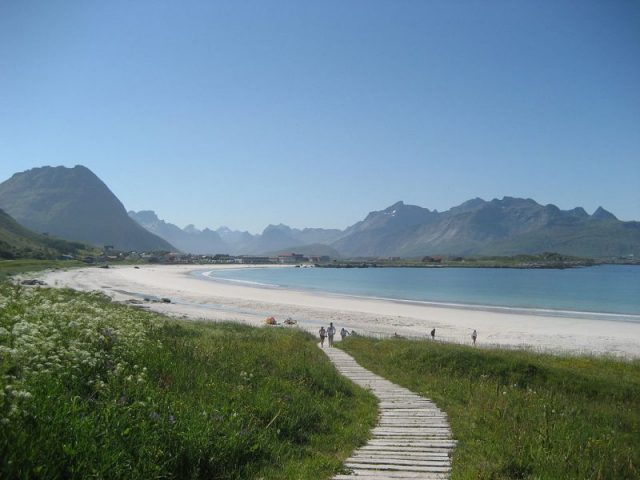 Analysis revealed that those who had been decapitated ate a very different diet from the others. The scientists who made the discovery, including Elise Naumann, proposed that where there were people buried two or three to a grave, the bodies may have come from different strata of society, and that slaves could have been offered as grave-gifts during the burial.

Vikings were known to keep slaves, or thralls, to help with farm work. The team analyzed mitochondrial DNA from the remains and learned that the bodies were not related, at least on the maternal side.

Naumann said that analysis of the bones suggested that the beheaded bodies ate more fish, while the others ate more of a land-based diet, reinforcing the idea that they came from different classes.

Naumann further remarked that there have been other examples, elsewhere, of human sacrifice attached to burials, where there were bodies which had been tied hand and foot, beheaded, or showing other means of sacrifice, also appearing to be grave gifts.

Human sacrifice was just one more facet of a very complex culture, one that was both brutal and civilized.