Vintage Tattooed Women Around the Globe

These pictures of vintage women getting tattoos might look “modern,” for their time period. But the art of tattooing has been around longer than almost every other visual art.

Tattoos have been used as symbols of love, purity, religious devotion, status and even forms of punishment. Even the third chapter of the book of Genesis includes an enigmatic passage where Cain, the firstborn son of Eve, was said to have had a mark put upon him by God.

According to Smithsonian, Joann Fletcher, a research fellow at the archaeology department of the University of York in Britain, notes that a 5,200-year-old frozen mummy called Ötzi shows evidence of deliberate body markings.

The markings looked like dots and crosses along the Iceman’s lower spine, right knee and ankle joints The theory is that the marks may have been the result of some kind of ancient “acupuncture type treatment,” to relieve joint pain. 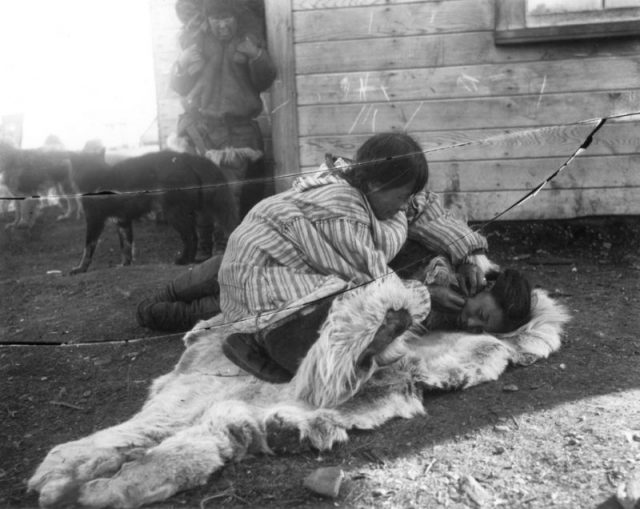 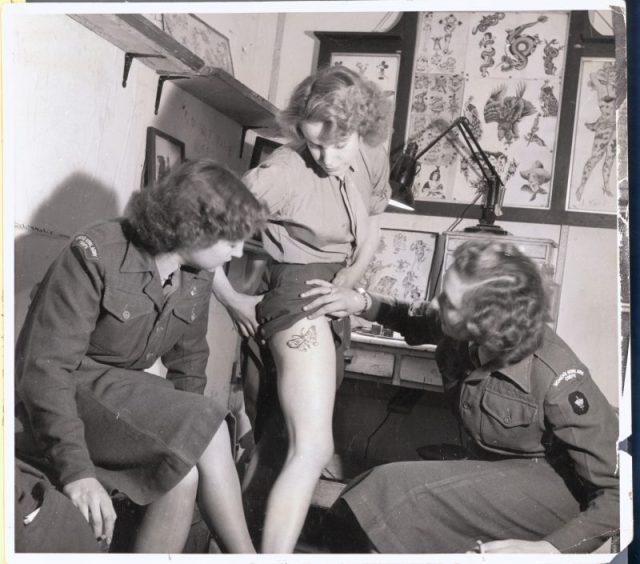 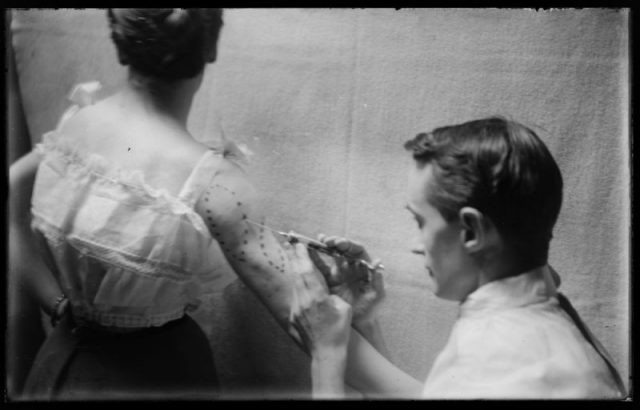 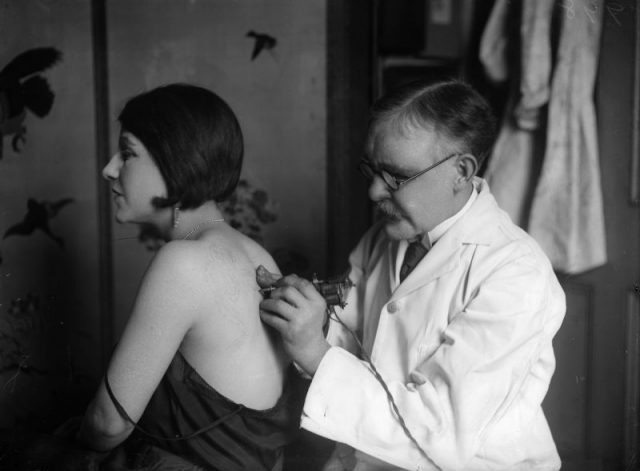 A woman having her back tattooed, circa 1930. (Photo by General Photographic Agency/Getty Images) 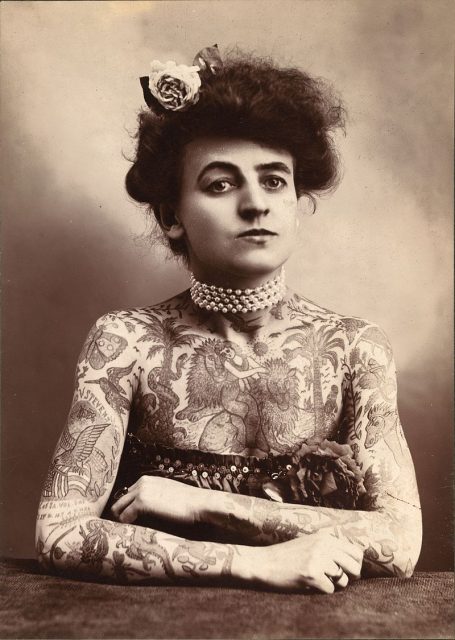 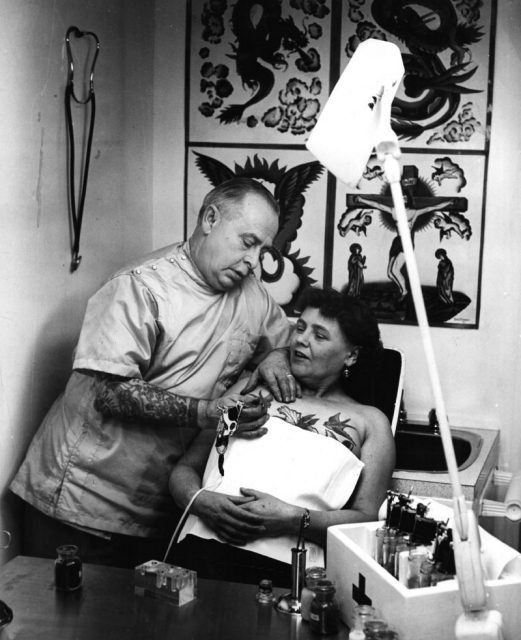 A tattooist painting a bluebird on a woman’s breast, February 1965. Photo by Jim Ryan/Keystone Features/Getty Images

Other mummies, discovered in Greco-Roman burial sites at Akhmim, showed that the practice of body art had made its way from Egypt to Greece, along with the practice of mummification. The ancient practice of decorative tattooing seemed to be exclusive to women, perhaps as a sign of status, or “ownership” by their husbands.

Some tattoos appear as “net-like distributions of dots” over the abdomen, a pattern which was believed to protect a woman’s baby during pregnancy. According to discoveries by archaeologist W.M.F. Petrie, these tattoos might have been made with sharp bronze instruments resembling flattened needles.

Mummies found in China’s Taklamakan Desert show that criminals were tattooed during the start of the first millennium AD. But, by the 3rd century, men in Japan started to mark their bodies, followed by others in the Polynesian culture. The designs became more and more elaborate as the practice spread to other places in the world. 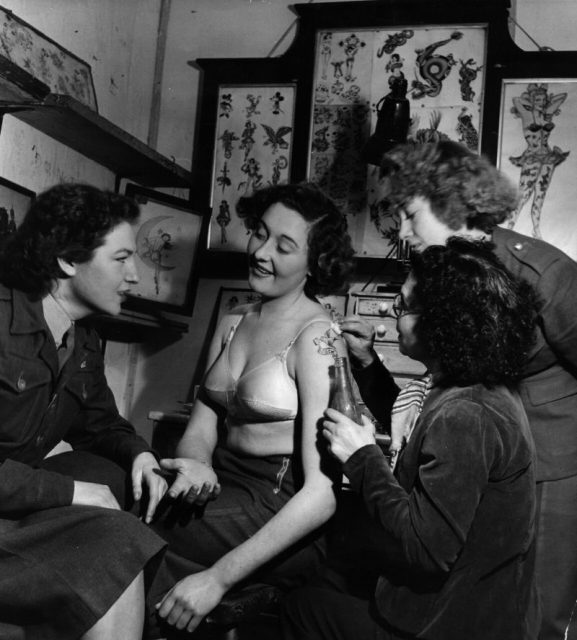 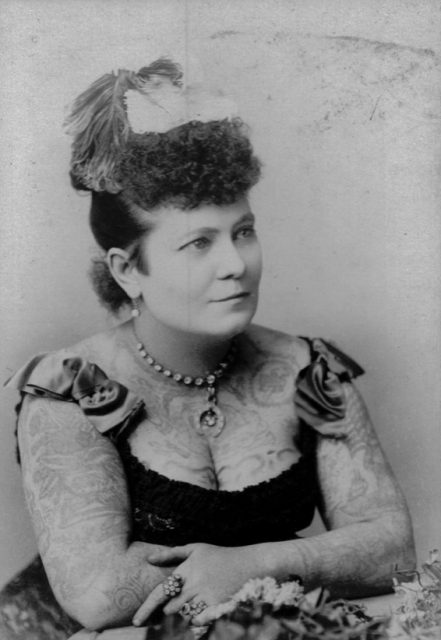 Nora Hildebrandt – one of the first ‘tattooed ladies’ circus performers to perform in the U.S. – circa 1880 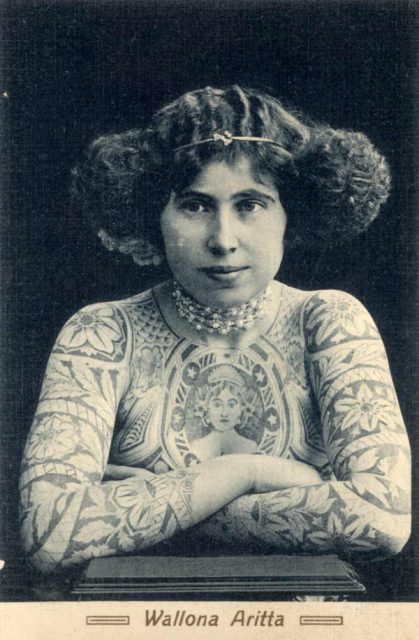 A postcard of one of Australia’s tattooed ladies, Wallona Aritta. Photo by State Library of Victoria Collections CC BY 2.0 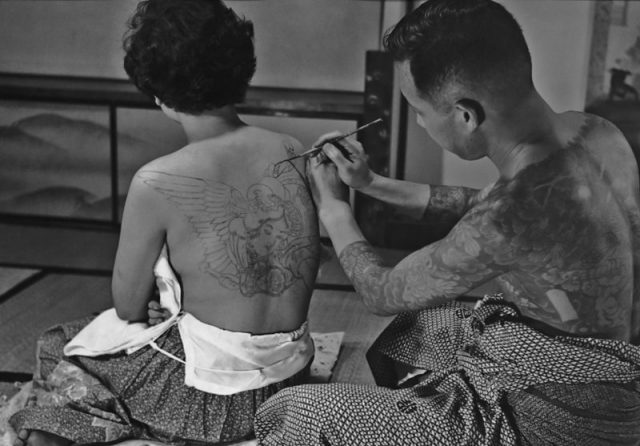 Tattoo artist Horigoro at work on a design on a woman’s back in Japan in 1955. Photo by FPG/Getty Images

19th century English writer William Lane observed the methods of tattooing children on his travels in Egypt in 19th century: “The operation is performed with several needles (generally seven) tied together: with these, the skin is pricked in the desired pattern: some smoke black (of wood or oil), mixed with milk from the breast of a woman, is then rubbed in… It is generally performed at the age of about 5 or 6 years, and by gipsy-women.”

Read another story from us: The Most Beautiful Women of the Early 1900s

Today, body art is popular all over the world and in just about every culture. The word “tattoo,” came about as a result of James Cook’s 1769 expedition to Tahiti, where the Islanders’ used the term “tatatau” meaning “to strike or to hit.”

« The Orgiastic Drunken Spectacles of Viking Religious Ceremonies
The Story of Cinderella Goes Back 2,000 Years »