Bridal fashion always echoed the fashion styles of the time. When you see an old bridal dress, it is often easy to date it according to its style.

Historically, the wedding dress represented the social status and economic power of the bride’s family. Naturally, more privileged families sometimes spent fortunes on the fabric and the dressmaker, while others remained more modest due to their budget.

Today, many people are feeling somewhat nostalgic for the jazzy, golden 1920s. Liberation, glamour, parties, jazz music, bootleg gatherings, and the revolutionizing fashion style. And as bridal trends come and go, the allure of the Jazz era is ageless and continues to influence designers to this day. 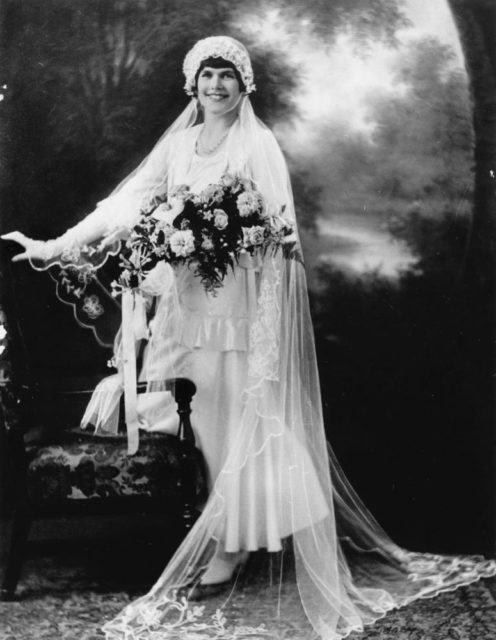 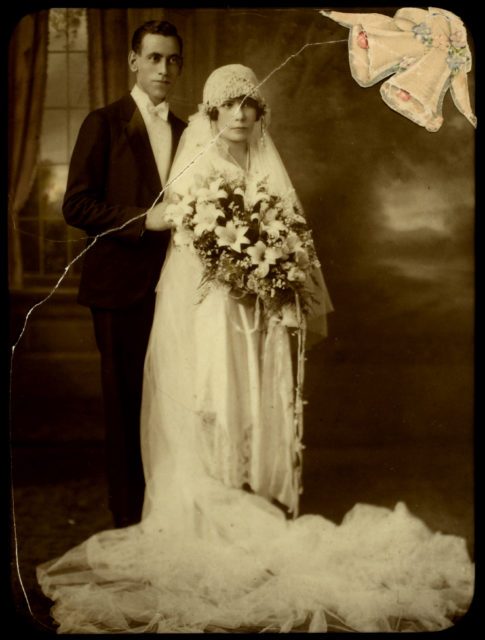 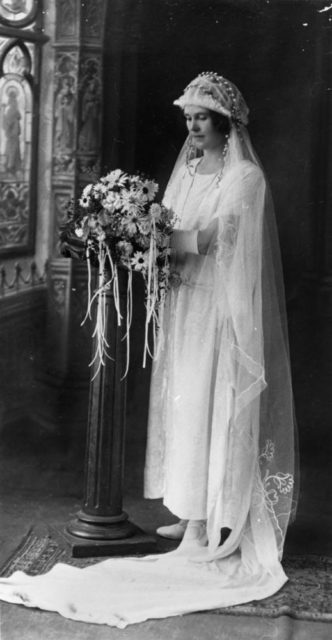 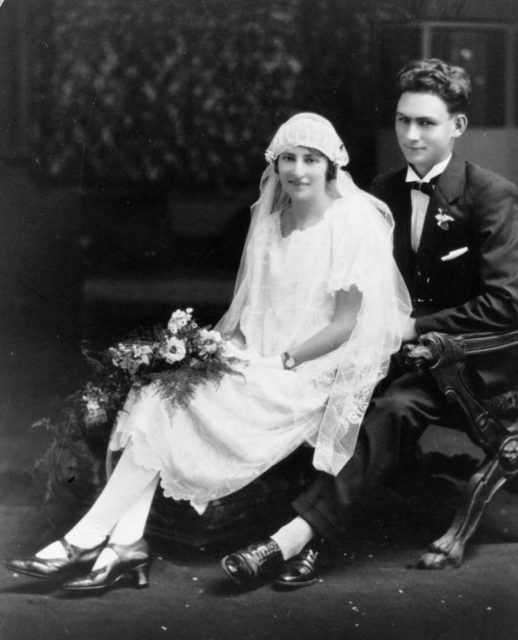 If there are two words that describe fashion of the roaring 1920s, those words would probably be wild elegance. Fringe, feathers, sparkling embroidery, beading and sequins on loose and shapeless chemise dresses with dropped waists, how else can we describe them?

The jazz era saw daring wedding dresses. The loose, straight tailoring of female clothing was in vogue at the time, so, understandably, wedding dresses reflected the same style. Dropped waists teamed with raised hemlines introduced the elegant, slim silhouette of the modern brides. Typically short, the wedding dresses of the 1920s were most often white, though hues of eggshell, ecru, and ivory white were seen. 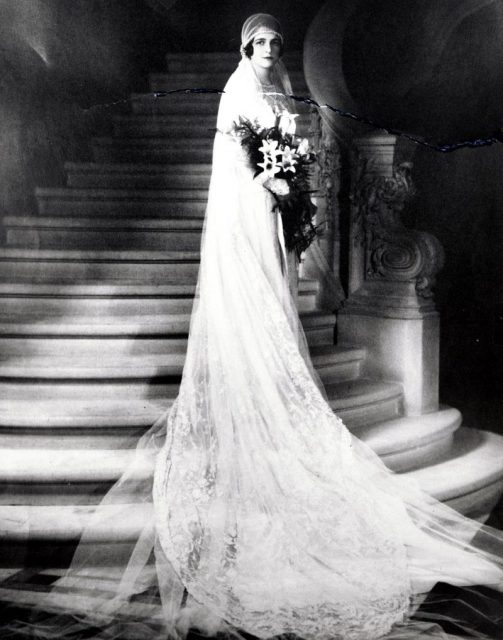 The most common material used for the dresses was a sumptuous fabric, mostly silk or satin in pastel colors. Some had lace trimmed details or intricate gold or silver embellishment on the bodice. The back was often covered with lace or silk-covered buttons. 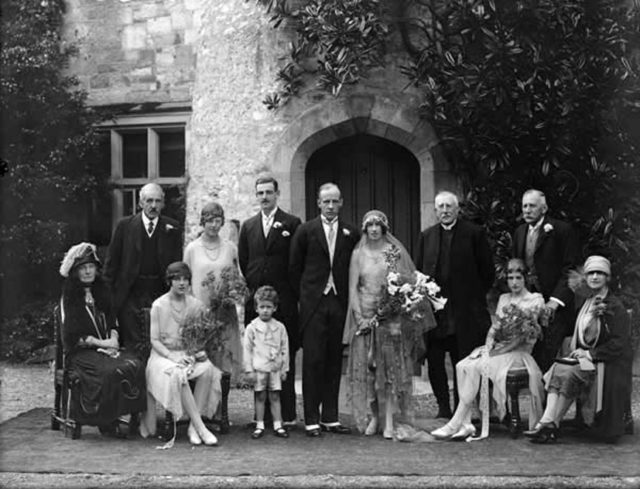 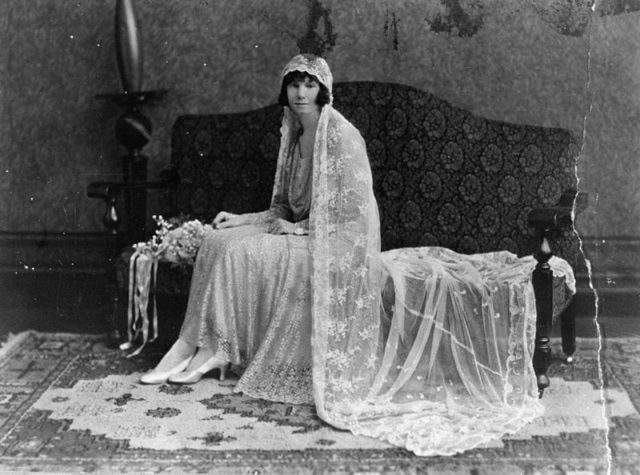 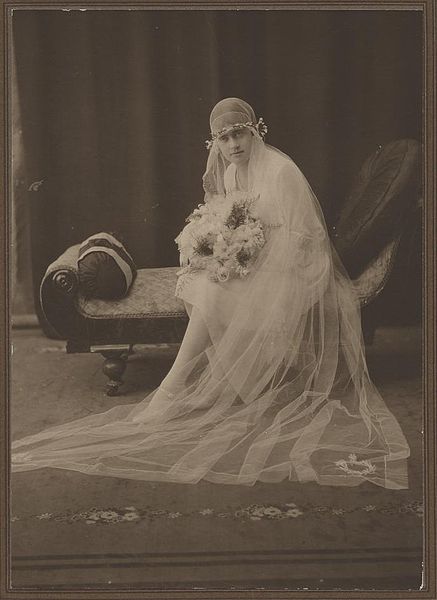 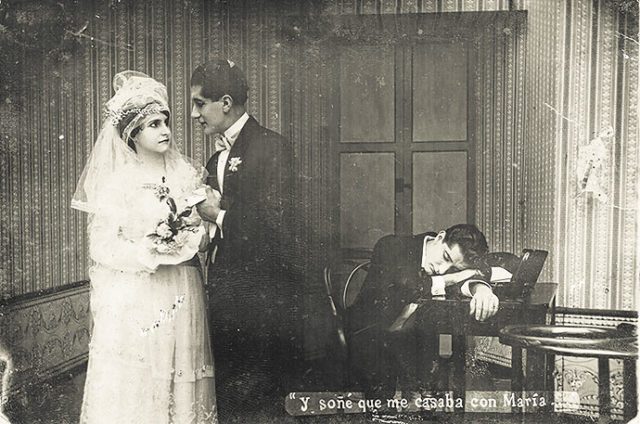 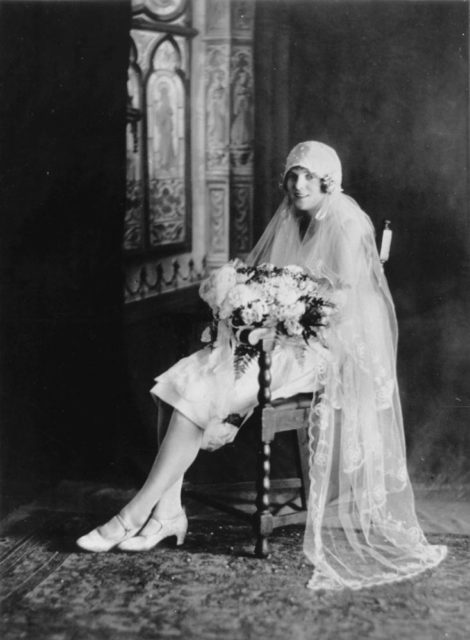 Studio portrait of a bride, she wears a cloche hat and Mary Jane shoes.

To complement the authentic apparel, many of the brides chose to wear special headbands or beaded glitzy hair accessories, or the popular Juliet cap veil that made much of their graceful visage. Fancy T-strap shoes, Mary Janes, or pumps were added to the exquisite bridal appearance, matching these ornamental headpieces.

The aficionados of Art Deco style proudly wore extravagant geometric patterns of shimmering pearl beads. It was the beauty of the era, the jazz, and the fun that were personified in the shimmering scalloped details of the dress. That’s why people are nostalgic for 1920s fashion and organize modern Gatsby weddings.

Art Deco in fashion flourished over a decade, but from the 1930s onward, those shiny, popular dresses became outdated and in discord with the styles of the time. As for the wedding dresses, they refrained from reflecting contemporary fashion styles and became more traditional, often based on Victorian styles.

« A Sophisticated Psycho: Hannibal Lecter was Based on a Real Doctor
The Legendary Chief Who Almost Unified All Native Americans »