3D is now an established part of the cinema-going experience which, combined with IMAX, gives audiences bigger thrills and vivid spills.

Viewers with long memories will remember earlier efforts from the 1980s such as Jaws 3-D. And those with even longer memories may recall lurid 1950s entries like House of Wax. For the very first feature film presented in 3D however, the chronology stretches all the way back to the Roaring Twenties.

1922’s The Power of Love was the first feature-length (or 5 reels long) movie shown to an audience. Sadly the film is believed lost but the website Silent Era quotes a contemporary synopsis, care of Motion Picture World. 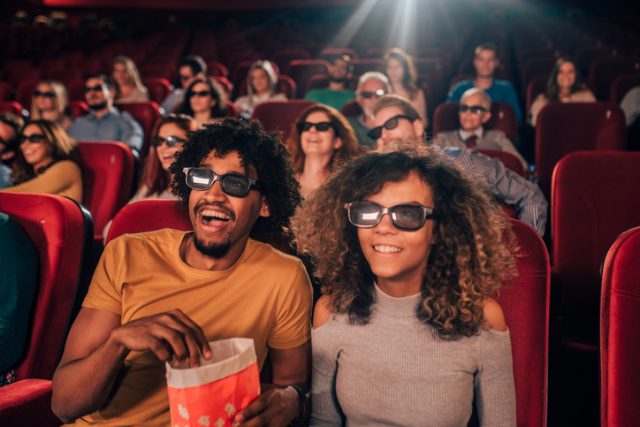 3D is now an established part of the cinema-going experience

This reveals an overheated melodrama. Maria (Barbara Bedford) finds herself the victim of her father’s financial problems when promised in lieu of payment to local bigshot Don Alvarez (Albert Prisco). She then falls for male lead Terry O’ Neill (Elliott Sparling). “Just before the wedding, O’Neill waylays Alvarez” the synopsis reads, “and takes his place at a fiesta.”

But the villain isn’t beaten yet. “Alvarez appears and denounces” O’Neill, before framing him for the murder of a padre. “Alvarez tries to shoot him, but wounds Maria, who throws herself in front of him.” She survives and goes on to expose Alvarez, resulting in the expected happy ending. 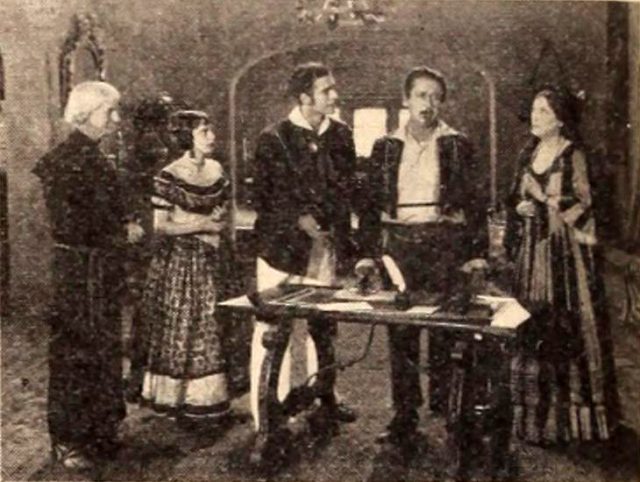 Still from ‘The Power of Love’, published in the Exhibitor’s Herald

Despite its innovative nature and good reviews, the movie wasn’t a success in 3D. It only received two showings that way, before a reworked 2D version was released the following year under the title Forbidden Lover.

Predating The Power of Love was a famous example of Lumiere Brothers’ locomotive short L’arrivee du train (1903). As written by IGN in 2010, it “depicted an oncoming train roaring into a station. The quality was apparently good enough to convince several members of the audience they were about to be run over.” 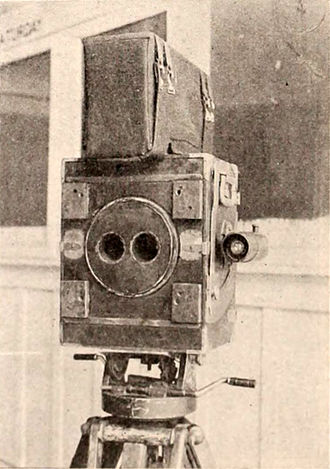 In terms of the technology behind the movie magic, 3D has been worked on almost as long as the industry itself. Many names contributed to the end result.

A 2009 Guardian article describes how in 1894 English inventor William Friese Greene filed “a patent application for a 3D viewing process using two screens side by side, united in the viewer’s eye by a cumbersome stereoscope headset.” 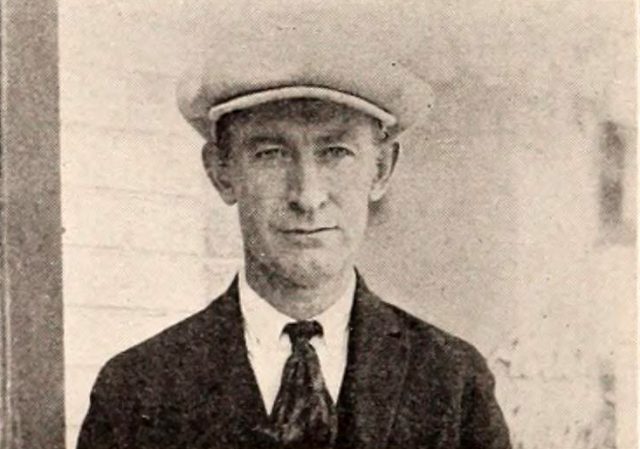 Stereoscopic photography required such a system in order to merge the two images into a coherent whole. Six years on and Frederic Eugene Ives, a US inventor, was trying out a new camera rig which used two lenses at once.

In 1915 American filmmaker Edwin S. Porter and William E. Waddell introduced an anaglyph technique. An anaglyph, in photographic terms, is when two different-colored images are superimposed.

Camera operator Harry K. Fairall and cinematographer Robert F. Elder then came up with another rig that projected dual strips of film. This, combined with progress made by their predecessors, was the process used to exhibit The Power of Love. It was shown at the Ambassador Hotel Theater in Los Angeles. 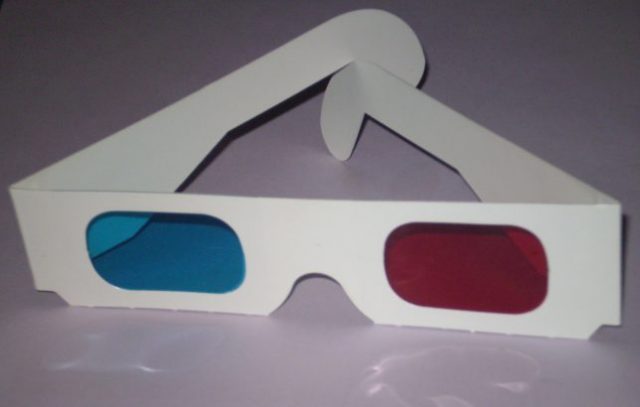 To get the 3D effect makeshift lenses — one red, one green — were needed to create a filter and fool the brain in the right way. IGN writes that “Red and Cyan are the most commonly chosen colors because that combination produces less image ghosting than others.”

Developments continued in 3D filmmaking, though the basic idea of slipping on a pair of specs was essentially the same. Edwin Land’s Polaroid filters became an industry standard for 3D work, starting with 1952’s lion-hunting adventure Bwana Devil. 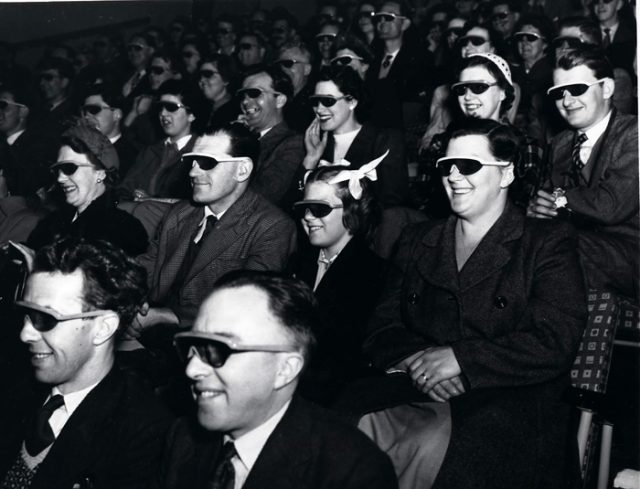 Audience wearing special glasses watch a 3D stereoscopic film at the Telekinema on the South Bank in London during the Festival of Britain, 1951

The early Fifties were a fertile period for 3D. “Thanks to a booming postwar economy,” IGN writes, “more consumers and theater owners were receptive to the new technology. 3D glasses were becoming popularized among children thanks to the numerous 3D comic books and their included anaglyph glasses.” Naturally, superhero flicks are among today’s 3D heavy hitters on the big screen.

Overall the business was seen as too cumbersome to really catch on. Notable examples of the highs and lows included profitable sex comedy The Stewardess (1970) and box office flop Spacehunter: Adventures In The Forbidden Zone (1983). 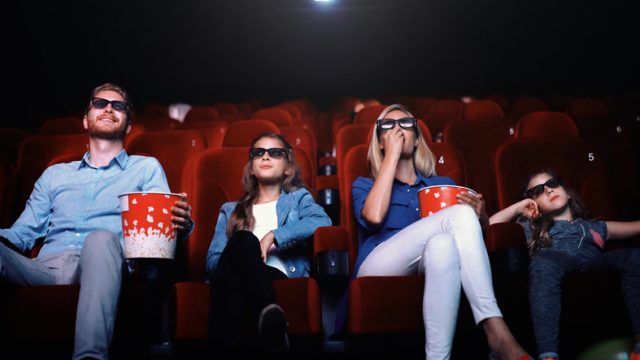 James Cameron helped bring the format into the 21st century with Titanic exploration documentary Ghosts of the Abyss (2003), shooting on HD video for IMAX presentation. He then directed the fictional escapades of Avatar in 2009, to enormous financial success.

Life has always existed in three dimensions, but are 3D movies truly here to stay? The history of moviemaking has shown that even if it does fall out of favor, it has a habit of returning for another roll of the dice.