The site where the Hereford Cathedral today stands has been a shrine dedicated to Christianity from the earliest days of missionaries on the British Isles. It was initially built as a tomb of two Christian saints ―St. Mary the Virgin and St. Ethelbert the King ―who fell victim to Offa, the ruler of the early medieval kingdom of Mercia, presumably around the year 793.

Then, in 830, after reports of miracles occurring at the tomb, a pious Mercian nobleman decided to rebuild the small church, laying the foundation for all future structures that were built in the next millennium. However, while the church itself is a marvelous achievement in ecclesiastical architecture, what it has held inside since the 14th century is the true wonder of the medieval world. 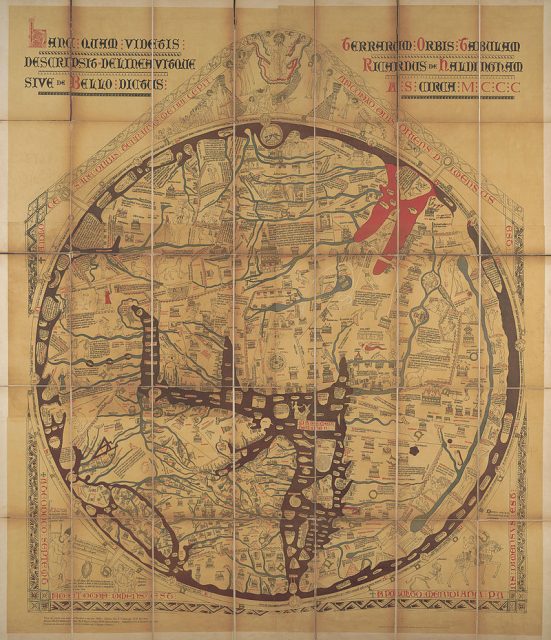 Facsimile of the Hereford map

Hereford Cathedral is widely known for owning what is considered to be the largest preserved medieval map. Referred to as Mappa Mundi (world atlas), it was created sometime around the year 1300, on a single sheet of vellum with dimensions 158 cm by 133 cm (62 x 52 inches). 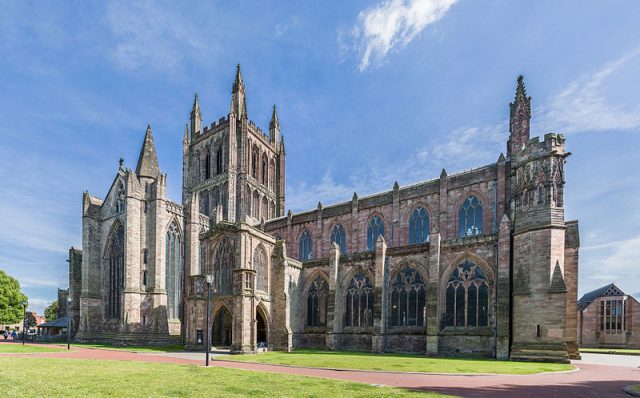 Written in black ink, with an addition of red, gold, blue and green for illustrations, it shows the map of the known world, from a Christian perspective, depicting townships, places of worship, animals and plants, as well as Biblical events and events from classical mythology. Although it spent centuries hung in obscurity above a choir aisle in the cathedral the Mappa Mundi sparked interest in 1855 when it was cleaned and repaired by the British Museum, with its importance slowly restored. 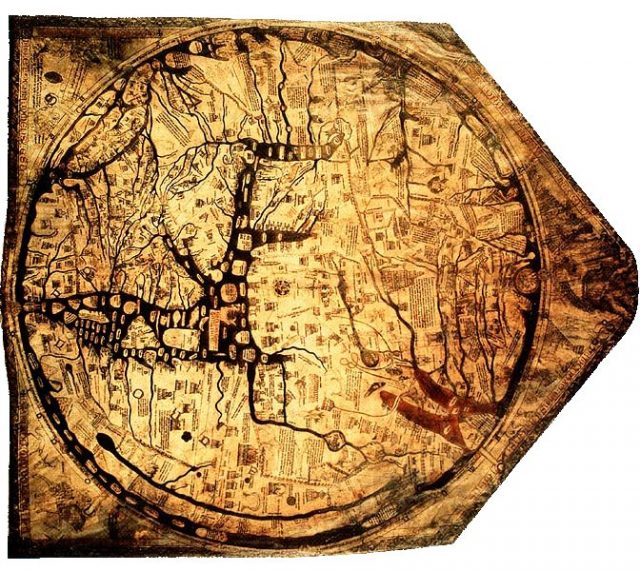 The map itself is an incredible insight into the mind of medieval monks and religious scholars, and their understanding of both geography and history of the world, within the blurred line between science and faith. At the very center of the Mappa Mundi stands Jerusalem, as it is the most Holy of all places for a medieval Christian. On the top, which is marked as east, lies the Garden of Eden — located on the very edge of the map and forming an axis of the world. 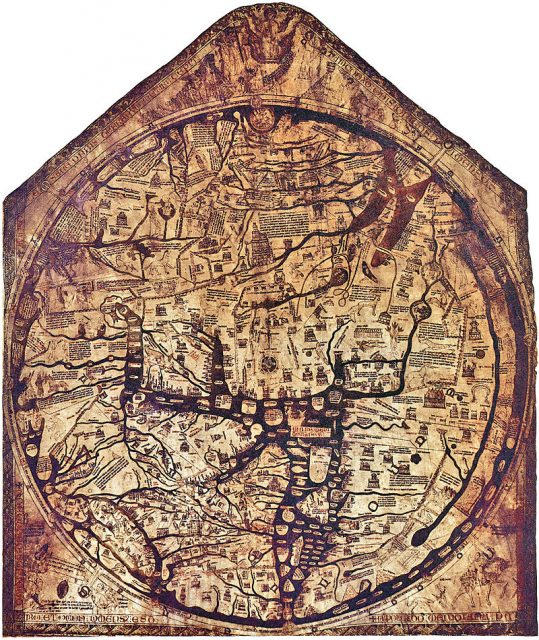 Although it sounds unusual, it was quite common for medieval map makers to place east instead of north on the top of a chart, as a form of honoring the birthplace of Christ and the Middle-Eastern origins of the faith. From that point on, it only gets weirder. Apart from the British Isles being located on the northwestern part of the map, which is pretty much accurate, Africa and Europe are reversed. 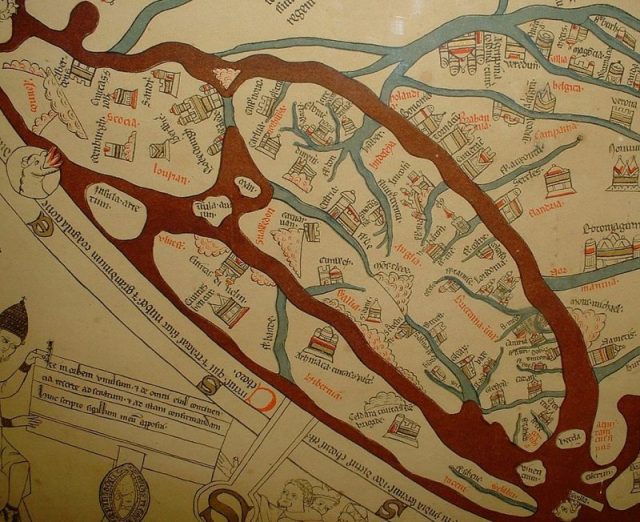 The European continent is marked as Africa, and vice versa. Caspian Lake is presented as connected with the encircling ocean, although it was already known at the time to be landlocked.

The illustrations featured on the map are a curiosity in their own right, as they show a number of places of worship and cities of great importance. The edges of the known world are inhabited with fantastic creatures, of the likes of headless warriors with eyes on their chest, and men with one giant foot.

These creatures are actually a nod to the Roman writer, Pliny the Elder ― a man of many talents and trades ― who long pondered in the subjects regarding nature and natural history.

His influential encyclopedia, Naturalis Historia, although not regarded as scientific by today’s standards, served as a cornerstone of biology in the Middle Ages. 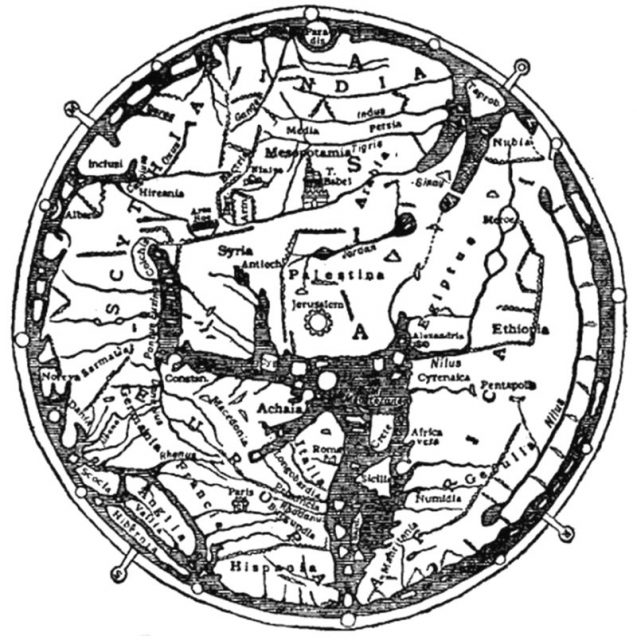 The Hereford Map (c. 1280) – a black-and-white simplified version of the Hereford mappa mundi

The book contains notes on mysterious and supernatural races of peoples, usually inhabiting Africa and India, the image of whom clearly correspond with the Mappa Mundi’s depiction of horrible human-like beasts in the far corners of the Earth.

Aside from mythology, the Mappa Mundi borrows another Greco-Roman concept ― one which would be a subject of repression by the Church in the following centuries.

The circular shape of the map suggests that it supports the theory that the Earth is spherical, in a time when such ideas were being violently replaced in Western Europe by claims of the planet actually being flat. 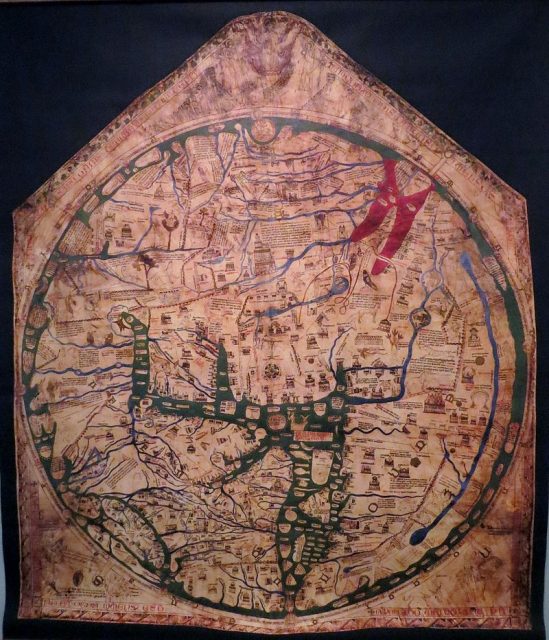 The Hereford map is a mappa mundi, or world map, from the 1300s. It is found above the altar in Hereford cathedral, England. Photo by Bjoertvedt CC BY-SA 3.0

It is important to note that this particular Mappa Mundi is based on older depictions of the known world, such as the Ebstorf Map, destroyed during the Allied bombing of Hannover in 1943, as well as the Psalter World Map ― a small-sized atlas which remains preserved at the British Library in London. Both of these maps stand by the theory of a spherical Earth.

As for the authorship of the Hereford Mappa Mundi, it remains a subject of debate. While the map is signed by one Richard of Haldingham and Lafford, also known as Richard de Bello, some experts insist that this attribution false. 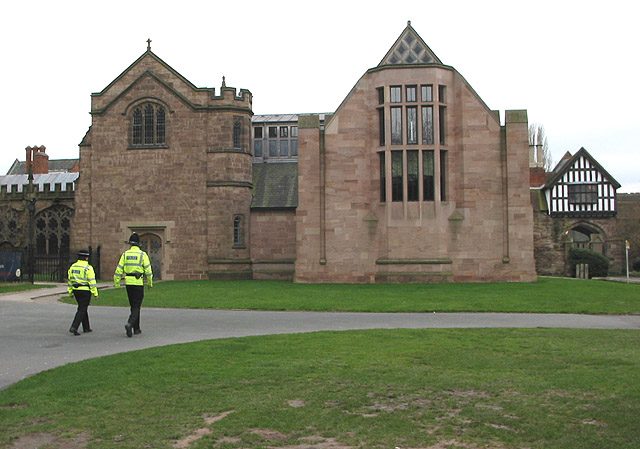 The new library at Hereford Cathedral, where the map is now housed. Photo by Pauline Eccles CC BY-SA 2.0

Today, the Mappa Mundi of Hereford Cathedral serves as one of the parish’s most treasured possessions. Since 1996, the map is kept in the new library building in the southeast corner of the cathedral, where it stands open to the public.

Read another story from us: Columbus’ Distorted Map of the World he used to Mistakenly Identify his Discoveries

The map has also been digitalized, along with 12 other similar maps, as part of the Virtual Mappa project, with the digital version bearing annotations for more than 1,000 places, names, and objects.