Despite the obvious risk, recent climbers were pushing and shoving to take selfies, a first-time Everest climber, Arizona Dr. Ed Dohring, told The New York Times. The flat part of the summit, “which he estimated at about the size of two Ping-Pong tables, was packed with 15 or 20 people. To get up there, he had to wait hours in a line, chest to chest, on an icy, rocky ridge with a several-thousand foot drop.” He even had to step around the body of a woman who had just succumbed to the elements.

“It was scary,” Dr. Dohring said by telephone from Kathmandu, Nepal, where he was resting in a hotel room. “It was like a zoo.” 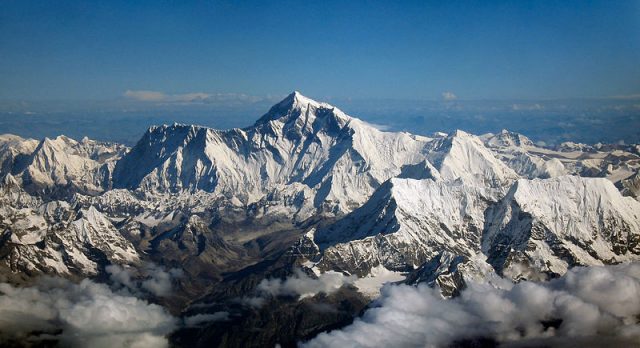 Mount Everest as seen from an aircraft south of the mountains, facing north. Photo by shrimpo1967 CC BY-SA 2.0

This is not the first time that the juncture of bizarre behavior and tragedy has captured the world’s attention. Many remember the uproar following the untimely ends of eight climbers and professional guides in 1996, inspiring the bestselling book by Jon Krakauer, Into Thin Air. 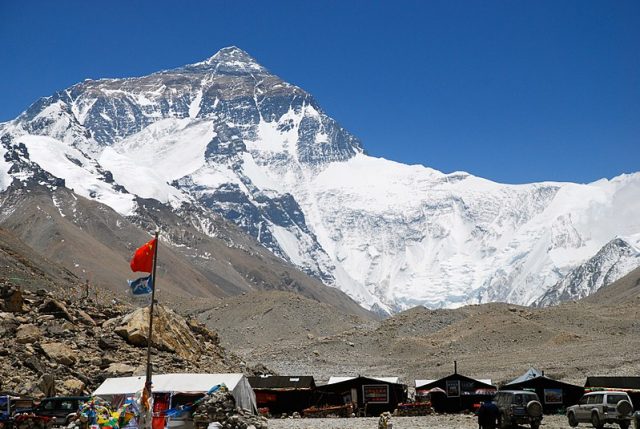 Mount Everest from the perspective of North Base Camp, Tibet. Photo by Gunther Hagleitner CC by 2.0

Since 1922, at least 300 people haven’t made it back while attempting to climb Mount Everest. The first thing to take into account is that climbers and scientists have a special name for the highest part of Everest: “The Death Zone.” Its summit is 29,029 feet above sea level–which is more than 5 miles. But any point above 26,000 feet means the oxygen is so limited that a human body’s cells start to die.

Climbers can experience strokes, heart attacks, or at the least severe altitude sickness. Some go “snowblind.” Judgment is seriously impaired. While waiting in gridlock lines to climb to the top, people are dying–and then their bodies are stepped over by others. 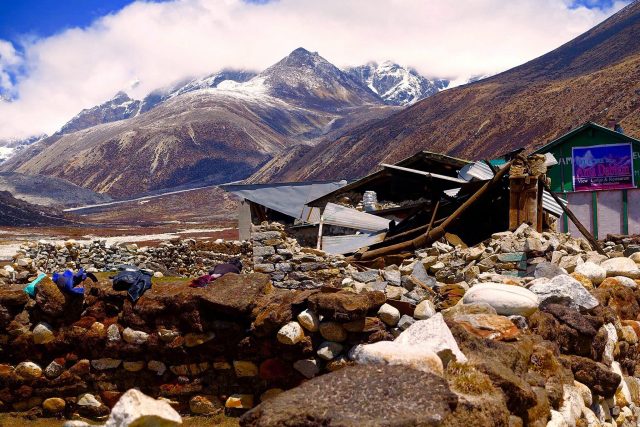 Mount Everest in the background of a collapsed structure in Nepal after a magnitude 7.8 earthquake in the region.

“Your body is breaking down and essentially dying,” Shaunna Burke, a climber who summited Everest, told Business Insider. “It becomes a race against the clock.” 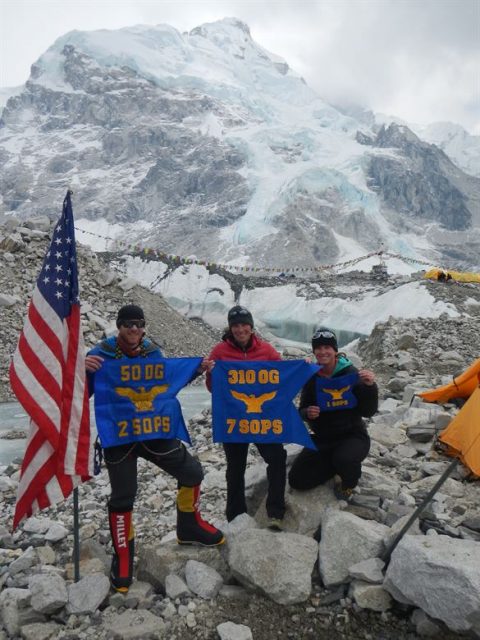 Mount Everest has been lethal from the beginning. In 1921,  English schoolmaster and mountaineer George Mallory, who is considered the first European to climb Mount Everest, discovered the northern approach to Mount Everest. His team reached an altitude of 22,982 feet but lacked the equipment to go farther. The following year, Mallory returned. His team used bottled oxygen to ascend to a record 27,320 feet–2,000 feet from the top–but seven porters died in a group-induced avalanche. 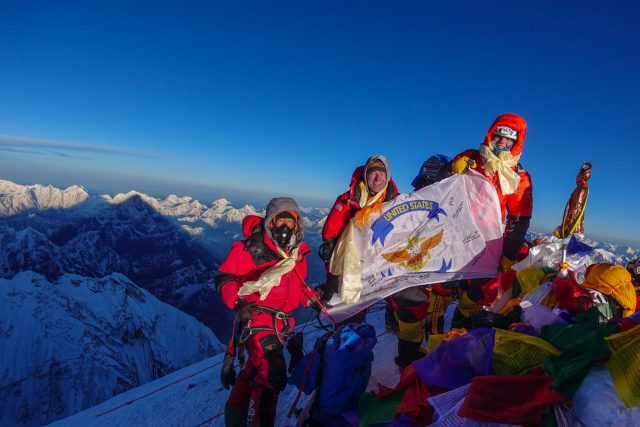 Matt Moniz, Mike Moniz, and guide pose for a photo on the summit of Mount Everest with a U.S. 7th Fleet flag. Photo courtesy of the Moniz family.

Mallory set about raising money for another try at the top. During a fundraising trip in 1923, he was asked by a New York Times reporter why he was so determined to get to the top of Mount Everest, and famously replied, “Because it’s there.”

Mallory’s third attempt to reach the summit, undertaken in 1924, claimed his life.  Although initially resistant to carrying oxygen, he’d realized he had no choice and followed the advice of other climbers, lugging the oxygen canisters with him. “The conquest of the mountain is the great thing,” he said. 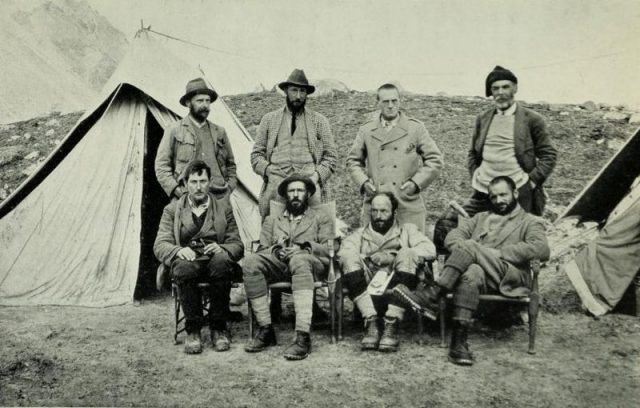 Struggling against terrible weather, Mallory and his teammates made it to 28,050 feet, but different small teams tried and failed to reach the top. Mallory chose Andrew Irvine, a young man, as his partner in one last attempt.

On June 6, 1924, Mallory and Irvine set out with porters. Several porters returned to camp with a note from Mallory saying, “There is no wind here and things look hopeful.” On June 8th, another teammate ascended to support them and thought he might have glimpsed Mallory and Irvine in the distance, climbing. But they did not return, and a vicious snow squall made it obvious days later the two men must be dead. 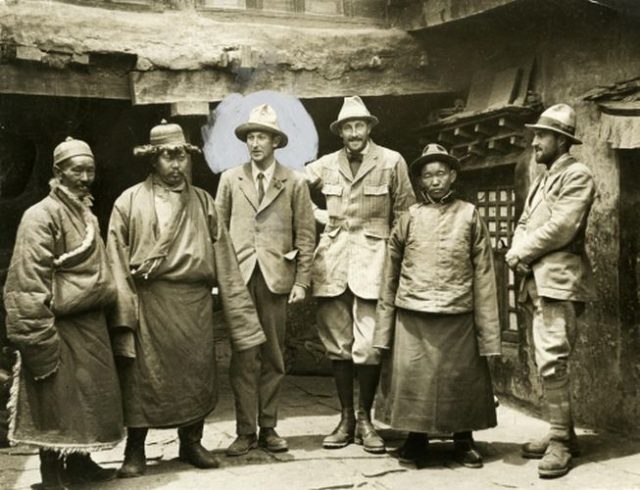 George Mallory (3rd from left with circle around his head) in 1924 right before the expedition that would take his life.

In 1999, the body of George Mallory was found on Mount Everest. Some of his clothing had disintegrated, but the parts of his body that had been covered were still well preserved. Irvine was not discovered, but his climbing axe was. Researchers concluded from the location of the axe and the rope tied around Mallory’s waist that Mallory had been tied to Irvine, and either fell, dragging Irvine with him, or cut himself free. The pair’s demise was most likely caused by a fall.

Related Article: The Disastrous Attempt to Reach the North Pole by Balloon

No one is certain if Mallory and Irvine died on the way to the summit of Mount Everest, or if they reached what they longed for so deeply, and died on the way back. But lessons need to be learned in this dangerous and crowded atmosphere of reaching the top of Everest happening at the moment.