The Starstruck Awkward Meeting Between the Beatles and Elvis Presley

A rare meeting of legends occurred when The Beatles met Elvis Presley. On August 27, 1965, a turning point in pop culture occurred at 525 Perugia Way in Bel Air, California, one that few knew about while it was taking place: the meeting between the four Beatles and Elvis Presley, in Elvis’s home. Despite the seismic fame of those who gathered within the walls of the house, no photographers took pictures inside and no reporters swarmed on the street outside. That was the way the musicians wanted it.

“Everything was quite secretive,” said Priscilla Presley in a later interview. She was then Elvis’s girlfriend, and living at the Bel Air house with him while he made a film. “Not a big deal was made about it because no one wanted it to get out to the press.” 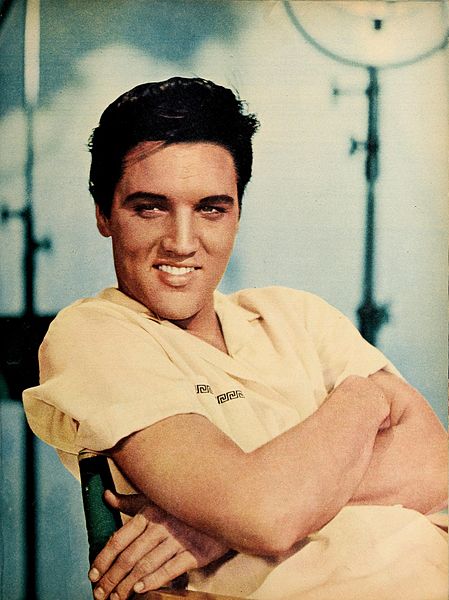 During the mid-1960s, Presley was making movies back to back: Harum Scarum, released in 1965, was an embarrassment; Frankie and Johnny, which followed, was a dud. Late in the summer of 1965, Presley was trying to re-create the magic of 1961’s Blue Hawaii by starring in the film Paradise, Hawaii Style.  Between 1964 and 1968, Presley had only one Top 10 hit, “Crying in the Chapel,” a gospel number recorded years earlier.

At that same time, the Beatles were recording songs and performing on television and touring, hailed as the most popular band in the world. The band’s fifth album, Help! was released on August 3rd, 1965; it would sell more than a million units in the U.S. by Christmas. 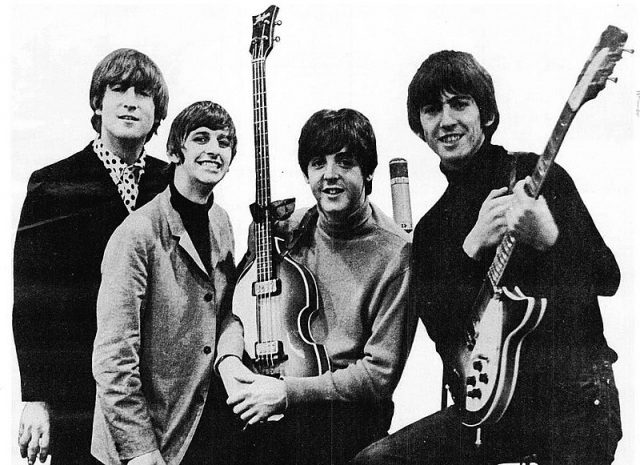 Journalist Alanna Nash, author of the books The Colonel and Elvis and the Memphis Mafia, told The Vintage News, “Elvis, who never really understood the Sixties, felt threatened by the Beatles, since they were having huge hits at a time he wasn’t, when he was making formulaic movies.”

But the Beatles revered Presley and were eager to meet him. Setting it up proved difficult, although the British band tried to make it happen in 1964. Colonel Parker, Presley’s manager, was too elusive.  Finally, while they were on their 1965 tour, the Beatles’ manager, Brian Epstein, arranged the L.A. meeting with Parker, who insisted they must come to Elvis, rather than the other way around. 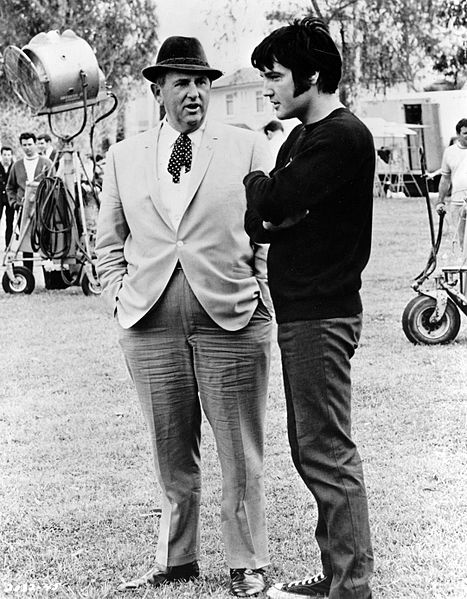 The Beatles didn’t care a bit about etiquette, they just wanted to meet Elvis face to face. “Quite simply, Elvis was important for everyone who came after him,” said Rolling Stone Contributing Editor Anthony DeCurtis, author of the book Lou Reed: A Life. “He was a hugely disruptive force, and inspiring for that reason alone. Lennon was attracted to that rebellious quality, in particular, but Paul, too, was a great admirer of Elvis. Elvis’s effect on his female fans did not escape their notice, either. There were strictly musical reasons, as well. Ringo and George were both massive rockabilly fans, and George loved and was greatly influenced by Elvis’s guitar player, Scotty Moore. For all of them, Elvis embodied the music of America, the promised land of rock & roll.” 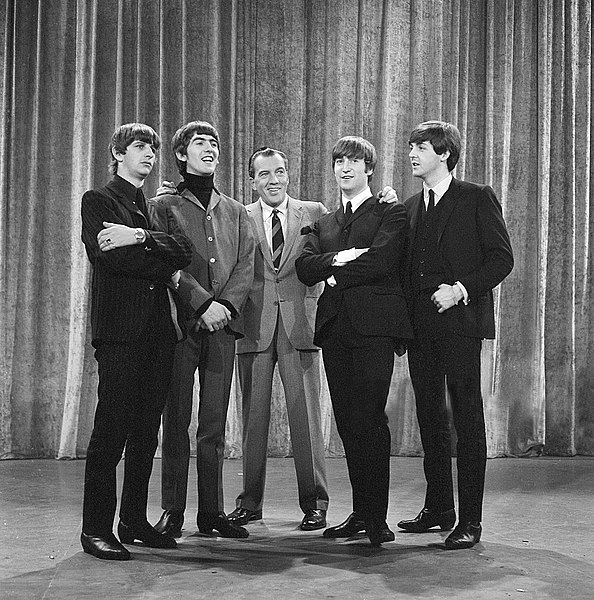 The Beatles on the Ed Sullivan show in 1964.

That evening, the Beatles were driven to Elvis’s mansion in a Cadillac limousine. At the last minute, Colonel Parker leaked the news so that fans had gathered outside Presley’s house. There were no reporters, but still, Elvis listeners would be able to bear witness to the Liverpool band’s arrival.

John Lennon, Paul McCartney, Ringo Starr, and George Harrison, accompanied by Epstein and a few others, were brought into Elvis’s home. The Presley entourage? Much larger. Tony Barrow, who worked for the Beatles, said later, “I would say, at a guess, that Presley’s army of henchmen and their womenfolk must have totaled about 20 people, well outnumbering our little group.” 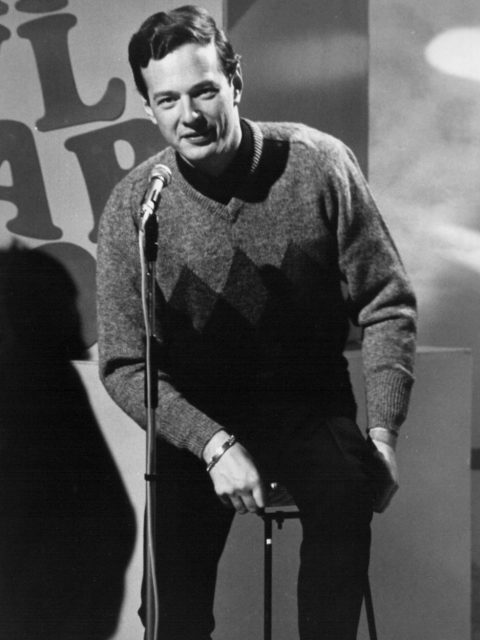 Elvis himself, 30 years old, sat on a couch in his large circular living room, the television on but with its sound off.  “They were so cute, but they were so nervous,” said Priscilla Presley later.  “You could hear a pin drop when they walked in. I was amazed by how shy they were.”

Finding common ground proved a problem. “It was a little bit awkward because they kept looking at him and not really saying anything,” Priscilla said. (The Beatles were duly impressed with Priscilla, though rather dumbfounded that she wore a floor-length purple gingham dress and a tiara.) 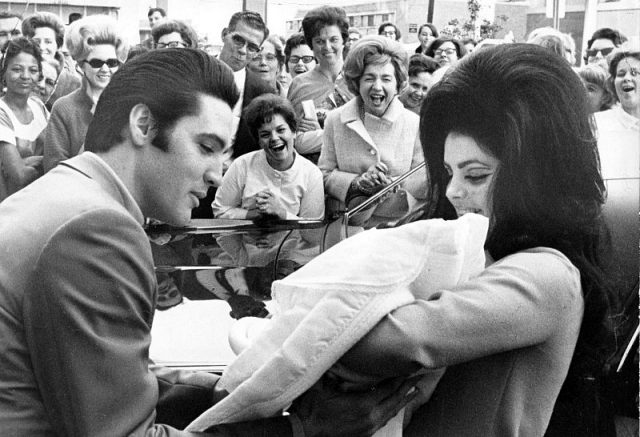 Finally, Elvis said,  “Well, guys, if you’re going to just sit around staring at me, I might as well go to bed,” and everyone laughed. He picked up a bass guitar and played along to the song on his jukebox,  Charlie Rich’s “Mohair Sam.” The Beatles began talking about music, and the tension eased.

Lennon, in a 1975 interview, admitted that the Beatles were “terrified. He is our idol. I just remember sitting there and him playing the bass. And me thinking, ‘It’s Elvis! It’s Elvis! It’s actually Elvis.’ He looked great then, no weight on him. He looked good.”

Alanna Nash told The Vintage News, “Finally, Elvis suggested they jam a little, and he went to the piano, and somebody came up with some guitars, and they played Chuck Berry songs, Elvis songs, and Beatles songs, with Elvis playing bass on ‘I Feel Fine.’ As the late Marty Lacker recalled in Elvis and the Memphis Mafia, Paul said something like, ‘You’re coming along quite promising on the bass there, Elvis.’ And then the ice was broken.”

After about four hours, Colonel Parker gave the hint it was time for the Beatles to leave. He handed them all gifts: Elvis Presley records. The Beatles wanted to get together again soon, hopefully with Elvis meeting them where they were staying in Los Angeles. But Nash said, “When they left, Lacker remembered that Elvis said, ‘I’m not going up there. I did my duty. I met them, and that’s it.’ ”

“It was one of the great meetings of my life,” McCartney said years later. “I think he liked us. I think at that time, he may have felt a little bit threatened, but he didn’t say anything. We certainly didn’t feel any antagonism. I only met him that once, and then I think the success of our career started to push him out a little, which we were very sad about, because we wanted to co-exist with him. He was our greatest idol, but the styles were changing in favor of us.”

The meeting itself, while rather innocuous, might well have had a lasting impact, DeCurtis said. “It’s certainly possible to speculate that Elvis was a continual point of comparison for the Beatles–Brian Epstein famously claimed from the very start that they would be ‘bigger than Elvis,’ an assertion that seemed insane to anyone who heard it at the time. In 1965, the Beatles were still trying to sort out what the future might hold for them. And, like Elvis, they’d begun to make movies. The notion of rock musicians as ‘artists’ was just beginning to take hold. Meeting Elvis would give them the chance to size him up in person, to see what he was like and evaluate what had happened to him and what implications that might hold for them.”

Related Article: The Morbid Beatles Conspiracy that Still Endures to This Day

At the end of the night, no matter the subtext, it was undoubtedly a huge thrill for the Fab Four. DeCurtis said, “He was still the King, and meeting him had an aspect of touching the flame. Can you imagine being able to say, ‘Yeah, I met Elvis one time’? I don’t think it was very much different for the Beatles.”