Nice Set of Wheels! The 12 Most Iconic Cars in TV History

Cars made famous on a TV show can reach a special level of worship. Here are some of the vehicles that have really made fans’ engines roar…

The Batmobile – Batman, 1966. Invented as a red car in the original comic book, the vehicle driven by Batman has appeared in so many different mediums. The most iconic, though, is the Batmobile seen in the mid-1960s Adam West TV  show. It was a 1955 Lincoln Futura concept car sold to car customizer king George Barris for $1 and then put through three weeks of intense transformation, from a Bat deflector to a Bat-glove compartment to a Bat-turn lever releasing a parachute. When it had to actually move, problems popped up due to the age of the car: it overheated, the battery went dead, and the expensive tires kept blowing. Still, this Batmobile was purchased at an auction in January 2013 for $4.6 million by an Arizona businessman. 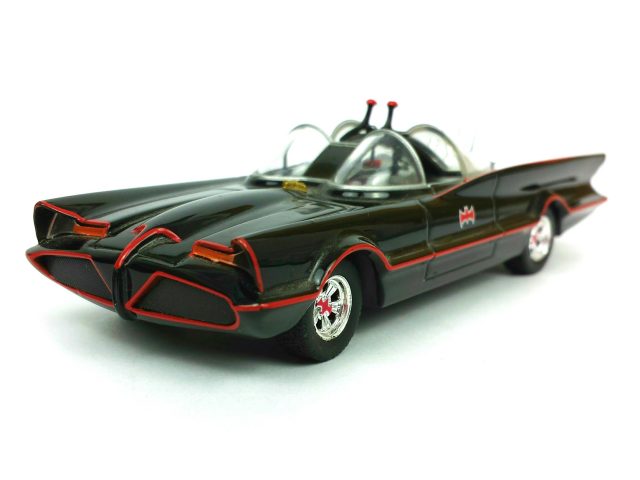 Batmobile from the 60s Batman show

Pontiac Trans Am KITT – Knight Rider, 1982. Crimefighter David Hasselhoff had the perfect partner in KITT, an artificially intelligent modified Pontiac Firebird Trans Am that could fire rockets, sniff bombs, spray tear gas, “ski” on two wheels, and even dispense money. Reportedly many of the two dozen KITTs used for the series were obtained for the production after a train derailment damaged a shipment of Trans Ams and made them hard to sell. 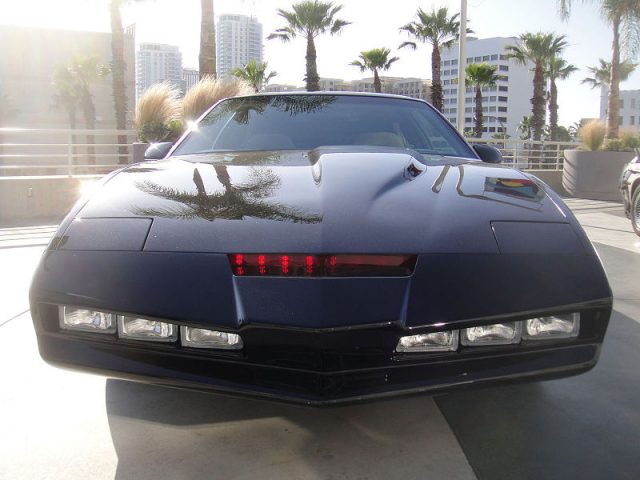 The General Lee Dodge Charger – The Dukes of Hazzard, 1979. The trademark 1969 Dodge Charger was famous for its horn, its police chases, wild stunts, and, most of all,  for having its doors welded shut, forcing Dukes Tom Wompat and John Schneider to climb in and out through the windows. More than 300 ’68 and ’69 Chargers doubled as “The General” over seven seasons. 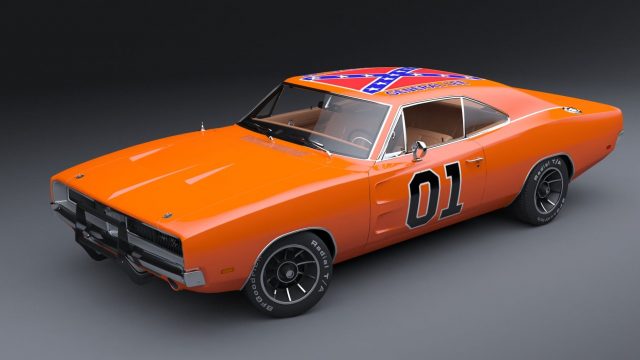 One of the earlest TV cars, the Munster Koach Model-T Hot Rod/Hearse Hybrid — The Munsters, 1964. Made by George Barris, it cost $18,000.00 to build with its “blood red” interior, spider-web headlights,  Jahns high-compression pistons, an Isky camshaft, Bobby Barr racing headers, and 10 Carter carbs plated in chrome. It also had a manual gearbox, brass fender and radiator, and was painted Gloss Black Pearl. 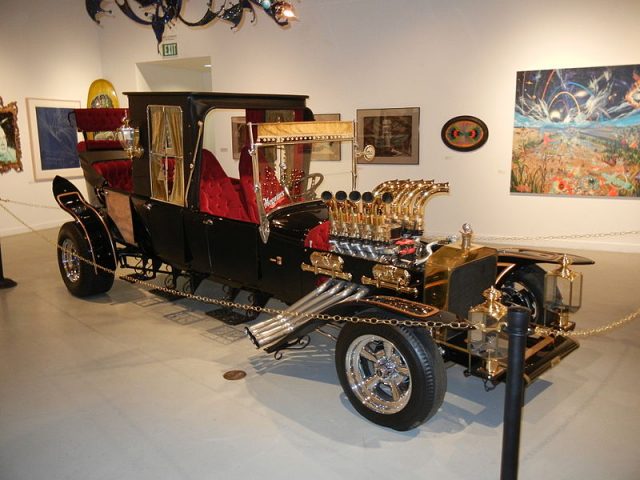 The Munster Koach. Photo by Bahooka CC by 3.0

Volvo sports car — The Saint, 1962. Suave Roger Moore required the perfect car and he got it: The Volvo Car Corporation supplied The Saint television producers a total of five P1800 models for use on their show. Volvo happily supplied the first one in 1962, registered as 71 DXC, within a week of its being requested. The same car was rediscovered on a North Wales farm in 1991 and eventually restored. 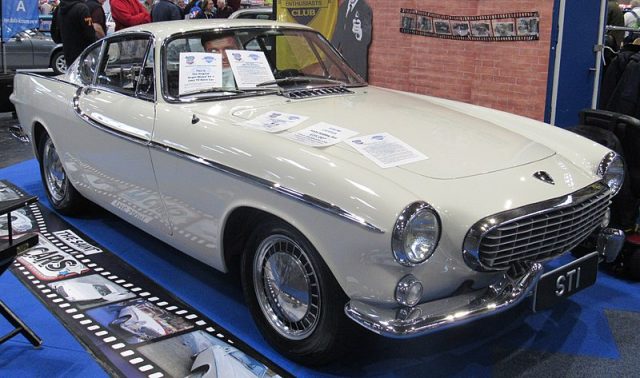 The smallest of the TV cars. Mini — Mr Bean, 1990. Rowan Atkinson’s beloved Mini’s just kept disappearing. The original car, an orange 1969 BMC Morris Mini 1000 Mark 2, seems to have been destroyed off screen in the pilot. Later, its replacement, a citron-green ’77 Leyland Mini 1000, was crushed by a tank. 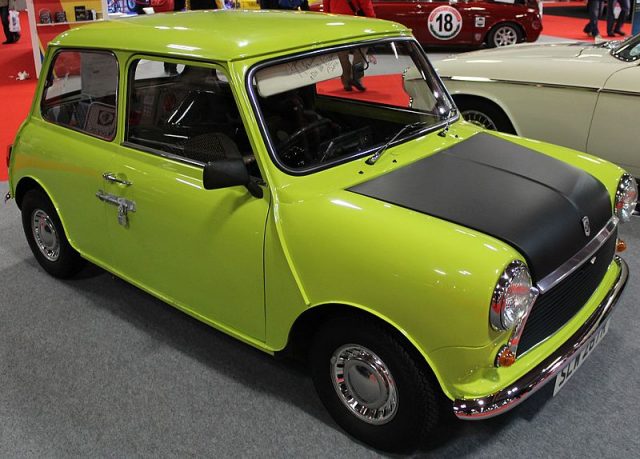 Ferrarri Daytona Spyder GTS/4 — Miami Vice, 1984. What could be more inconspicuous for an undercover cop than this? Detective Sonny Crockett drove a black 1972 Ferrari Daytona Spyder 365 GTS/4 replica with a Florida license plate “ZAQ178.” Ferrari North America had turned down the request by Miami Vice for authentic Ferraris. Reportedly Al Mardekian, an importer of gray-market exotic cars, sold Miami Vice the two look-alike Ferraris for $49,000 each. These two Corvette Daytona replicas were used for the show, before Sonny’s ride was destroyed by a Stinger missile. 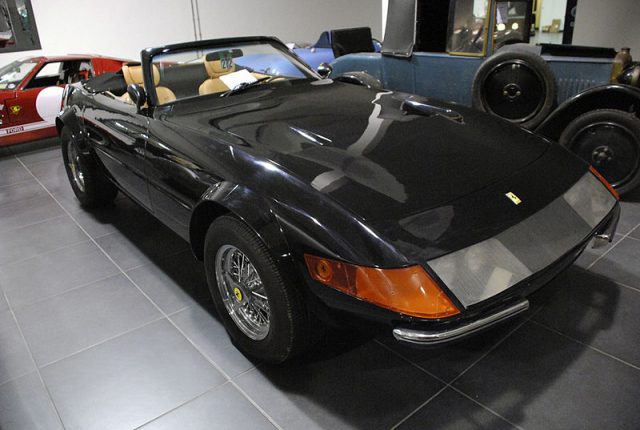 Ford Gran Torino — Starsky & Hutch, 1975. With its signature white vector stripes and muscle-bound 351 Windsor V8, the car a beloved part of the detective show, starring Paul Michael Glaser and David Soul. But the relationship between man and machine was tormented. Glaser loathed the Torino because of its poor handling: “I vowed secretly to David that I was going to do everything in my power to destroy that car,” he said during a 1999 interview for a British documentary. The duo went through 10 Gran Torinos in total.

Mustang Cobra II  — Charlie’s Angels, 1976. All of the gorgeous girl detectives drove cars, but the super-sporty Mustang Cobra II driven by Jill Munroe (Farrah Fawcett) and, later, her sister Kris (Cheryl Ladd), made the most impact, with its hood scoop, front and rear spoilers, quarter-window louvers and wide blue racing stripe peeling across the top. 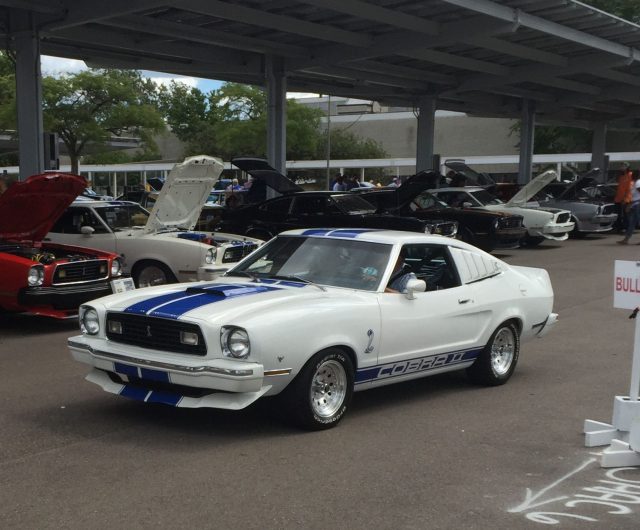 GMC Vandura — A-Team, 1983. This van, with its characteristic red stripe, black and red turbine mag wheels, and rooftop spoiler, is dear to the hearts of A-Team fans. In the back, along with Mr. T, could be found a mini printing press, an audio surveillance recording device, and elaborate disguise kits. 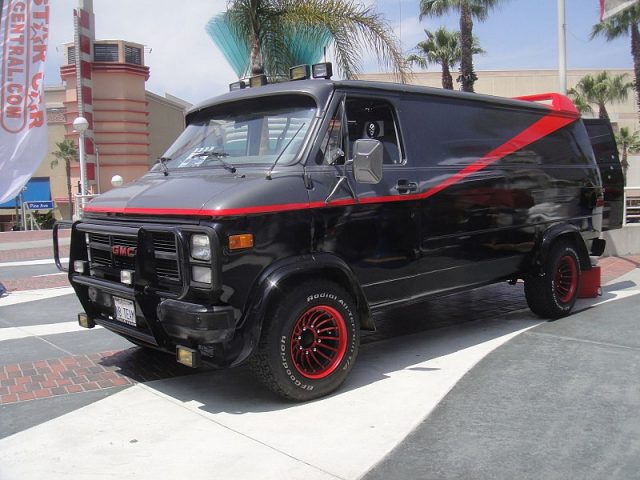 The A-Team van. Photo by The Conmunity – Pop Culture Geek CC by 2.0

Ferrari 308 GTS – Magnum P.I., 1980. Who can forget the candy-apple red Ferrari that a mustachioed and hawaiian-shirt wearing Tom Selleck cruised around Oahu in? This 308 was made famous in Hawaii for eight seasons while Magnum was on his laid-back tropical investigations, from 1980 to 1988. 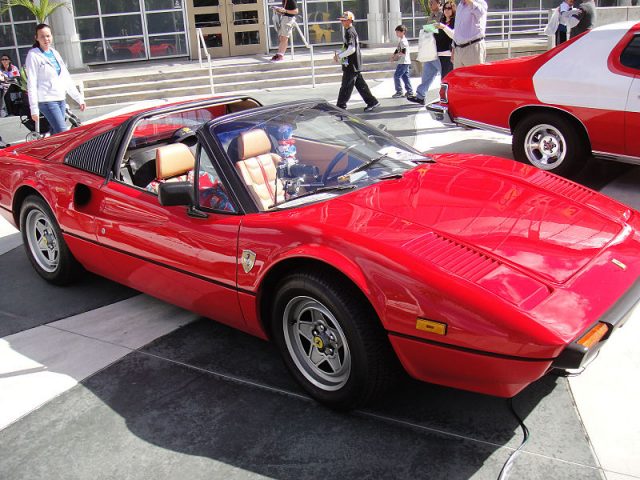 1921 Oldsmobile Model 46 Roadster – The Beverly Hillbillies, 1962. Black gold! When the Clampetts struck it rich by finding oil on their land and decided to move from the Ozarks to Beverly Hills, Jethro had to drive something truly memorable. Enter Hollywood car customizer George Barris who created the perfect hillbilly truck from a 1921 Oldsmobile Roadster. He added a rear platform with a high bench for Granny and Elly May to sit on. 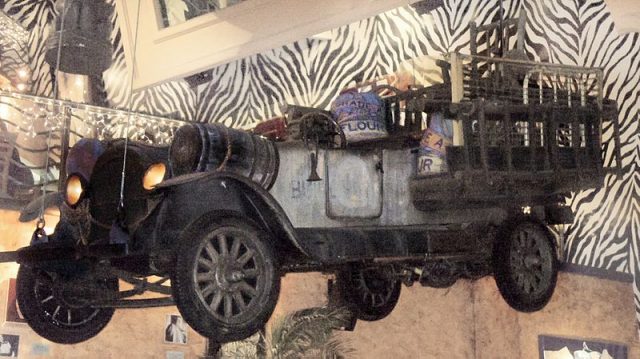 And there you have it. Some of the most iconic TV cars to ever hit the small screen. Check out some related content below for all classic car lovers:

The 10 most expensive vintage cars ever sold at auction: