An elite Viking drinking hall, or pub, on a Scottish island has been unearthed. For several years a team of archaeologists from the University of the Highlands and Islands Archaeology Institute, local residents and students have been excavating a site at Skaill Farmstead in the town of Rousay on Orkney Island off the northeast point of Scotland.

CNN Travel tells us that according to the project co-director Dr. Ingrid Mainland, “We have recovered a millennia of middens which will allow us an unparalleled opportunity to look at changing dietary traditions, farming and fishing practices from the Norse period up until the 19th century.”  What they didn’t expect to find was a Viking drinking hall that dates back to sometime during the 10th to the 12th centuries. 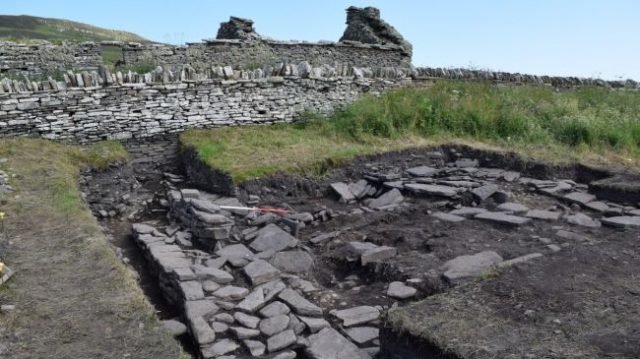 It was made of stone walls just over three feet thick about eighteen feet apart and a little over forty two feet long.  The long walls had stone benches running the length.  Who would have sat on those benches? The evidence points to it being a pub for the elites of Viking society.

In the 9th century the Vikings used the Orkney Islands as a land base to support pirate expeditions against coastal Norway and Scotland.  King Harald Fairhair of Norway seized the islands of Orkney and Shetland and set up an Earldom, a territory under the reign of an Earl – nobility of ancient Scotland – who ruled for an absent King. 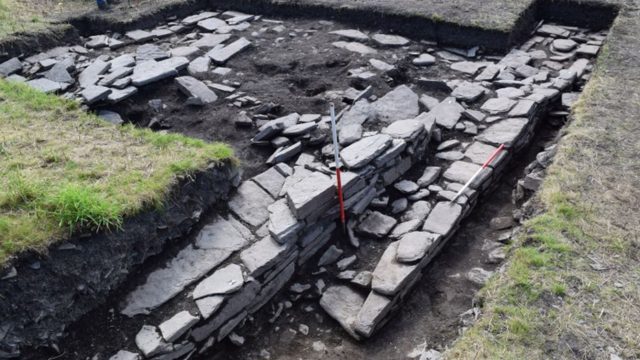 According to orkneyjar.com, the Orkneyinga saga, written sometime between 1192 and 1206 by an Icelandic author, tells us that the first Earl of Orkney was Sigurd Eysteinsson also known as Earl Sigurd the Powerful.  He was sent to Orkney Island by King Harald Fairhair of Norway to capture not only Orkney Island but the Shetland and Western Islands as well.

The saga claims that Sigurd Eysteinsson was a powerful and wise ruler but little else is known of his reign.  It is known that at one time Earl Sigurd had formed an alliance with Thorstein the Red and they conquered Caithness and large parts of Argyll, Moray and Ross in Scotland.  Because of their actions on the Scottish island, Earl Sigurd and a local magnate, Maelbrigte, became enemies. 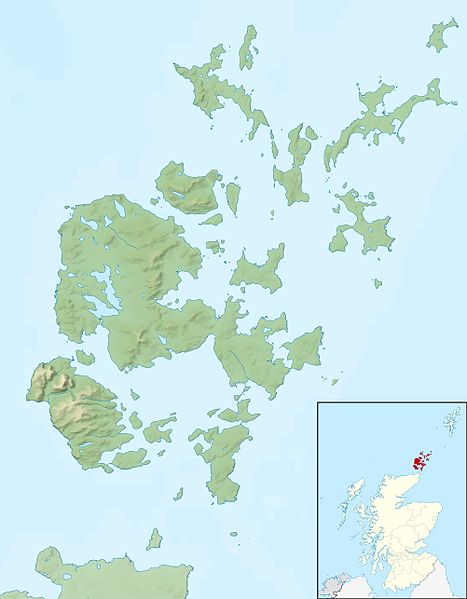 Map of the Orkney islands at the northern tip of Scotland. Contains Ordnance Survey data © Crown copyright and database right CC by SA-3.0

In order to settle their differences, they scheduled a meeting in which each would bring forty men.  Sigurd reneged on the deal and brought forty horses each with two riders.  Maelbrigte advised his men of the betrayal and instructed them to take out two at a time.  Regrettably, the Scots were outnumbered and Maelbrigte didn’t make it out alive.  Sigurd had the head of Maelbrigte attached to his saddle to display his victory to all who saw him.  As he galloped home, one of Maelbrigte’s teeth scratched Sigurd‘s leg.  It became infected leading to Earl Sigurd the Powerful’s untimely karmic end.

While the Orkneyinga saga is believed to be mostly embellished, it did lead the archeology team to the site of the ancient hall on the land of the Skaill Farmstead presently owned by Russell and Kathryn Marwick and they are hoping to find a Norse settlement nearby.

Some of the items dug up at the Viking drinking hall are post-medieval pottery and glass, metal objects, unglazed pottery, whetstones and slag used to smelt iron.  A fragment of a Norse bone comb, pottery and soapstone from Shetland were also found.  Previous excavations on the nearby island of Mainland turned up a hazelnut shell that has been dated to 6820–6660 BC and a settlement from 3500 BC was also discovered. 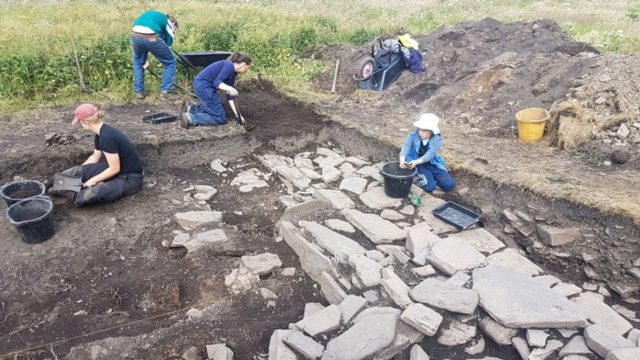 The project, part of the Landscapes of Change – Archaeologies of the Rousay Clearances and Westness Estate project, has stopped for the year and will resume digging next summer.  Guests and volunteers are welcome and those who wish to help with test pit excavations will be given training.  Children can also get involved digging small test pits, cleaning artifacts and participating in Living Archaeology activities.  Those wishing to work on the dig to earn credits for advanced degrees in archaeology and related fields are also welcome and can apply at studyarcheology@uhi.ac.uk.

According to archaeologyorkney.com, the digs are financed by Rousay Heritage Trust, a charity founded to help with “the advancement of the education of the public in the history, culture, natural history and any other features of life in the island of Rousay, Orkney and the preservation for the public benefit of the historical, cultural and natural heritage of Rousay and of its sister  islands, Egilsay and Wyre.”

Related Article: Turns out the Irish have more Viking in them than Previously Thought

Stories, Stones and Bones gives out grants to non-profit groups in order to attract participants to discover their local heritage through archeology, studying culture and tradition and historical programs.  The Heritage Lottery Fund uses funds from the National Lottery to assist museums, parks, historic places, archaeology, natural environment and cultural traditions to help educate the public of their heritage.