The American School Bus is Yellow – Here’s Why

The American yellow school bus is a worldwide institution. Those outside the US who don’t see it on the street certainly see it on TV, with characters like Otto in The Simpsons.

Why is it so recognizable? Due to the bright yellow color, a standard for school transportation across the country. The man who put the idea in people’s minds was Frank W. Cyr, an educator and author from Nebraska. Convening a meeting at Columbia University in 1939, Cyr aimed to reinvent the fine art of getting to school. He’d hit the road himself, traveling across 10 states to assess the situation. The haphazard results were cause for concern. 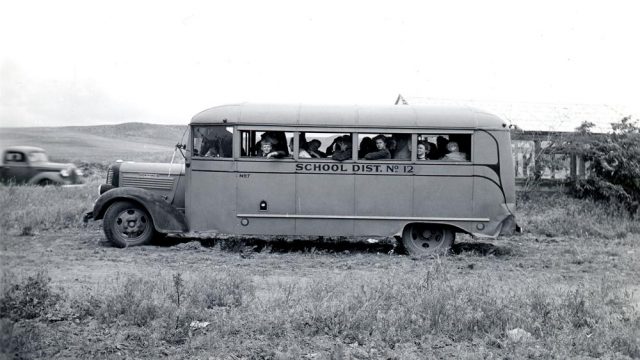 “In Kansas, children traveled to school in wooden wheat wagons,” wrote the LA Times, fifty years on from the famous meeting. “In many rural states it wasn’t unusual for youngsters to ride in trucks with floorboards covered with cow manure.”

It was a world not a million miles away from Cyr’s own. 1900 saw him born “in a sod house in… Republican River Valley” according to Smithsonian Magazine this year. The young Cyr “like many rural students, traveled great distances to school.” He took that experience and went on to gain an agriculture degree. Cyr then worked for years as a teacher and school superintendent. 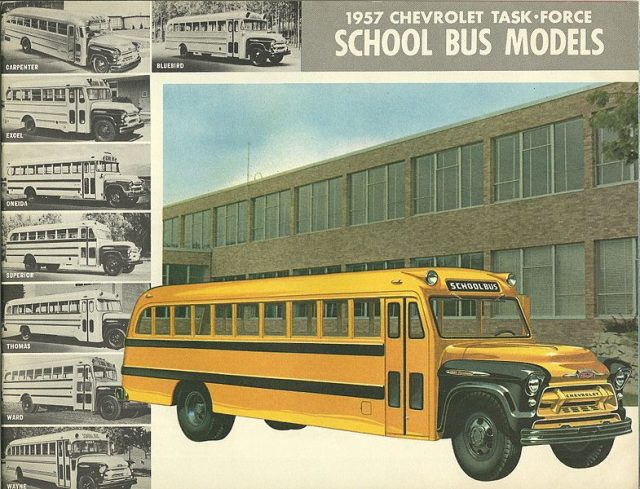 A scan of a 1957 Chevrolet brochure depicting the eight school bus body offerings available for its “Task Force”. Photo by John Lloyd CC by 2.0

He was the perfect person to address issues of transport. The economic benefits alone of pooling resources in this way made it a no brainer as far as this educator was concerned. The LA Times mentions how he “invited state education officials from across the country, engineers from Chevrolet, International Harvester, Dodge and Ford, and paint experts from DuPont and Pittsburgh Paint to Teachers College to set bus safety standards.”

The conference itself made a lasting impact. But it doesn’t appear to have been the most exciting of affairs. Cyr hung no less than fifty strips of color for districts to choose from over the course of seven days. Red, white and blue was suggested by some. The patriotic symbolism may have instilled national pride in students, but it also put them potentially at risk by making the vehicle less visible. 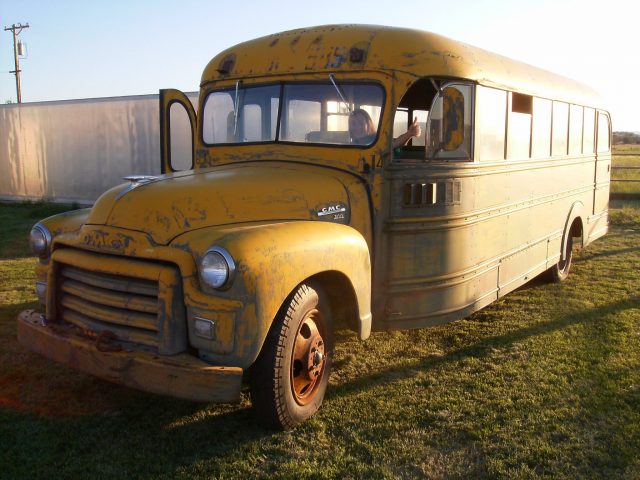 An interesting fact about National School Bus Glossy Yellow – aside from it being one of the most convoluted paint titles of all time – is its psychological effect on the public. Smithsonian spoke to an Ophthalmologist (essentially an eye doctor) who revealed the color is “‘right smack in the middle’ of the peak wavelengths that stimulate the photoreceptor cells (or cones) our eyes use to perceive red and green”. By stimulating two cones, the bus is reassuringly easy to spot.

Cyr’s diligence paid off in spades. Though it took time for everyone to take up the yellow mantel – with racial segregation leading to some authorities wanting to mix up the color scheme – the standardization process was successfully rolled out, so to speak, across the nation.

It also formed part of one of cinema’s most nail-biting climaxes in Dirty Harry (1971), where the villain hijacked a bus full of students and Clint Eastwood’s anti-hero had to jump on the roof from a bridge. Here the school bus became a defining symbol of purity which Harry had to protect from the forces of evil.

Related Article: Why do Barber Shops Feature a Red, White and Blue Pole?

Today the colorful vehicle is involved in less than 1% of annual road casualties. And 55% of children are safely transported in that unmistakable yellow shell. Fluorescent lime is the color reportedly favored by the attendees of an upcoming conference next year – a psychedelic move that could really mess with Otto’s mind!

« DNA from Ancient Burial Unlocks the Mystery of 5,000-yr-old Lost Culture
Check out the Rooms Inside the World’s First Space Hotel »