Check out the Rooms Inside the World’s First Space Hotel

Ready for a vacation in a space hotel? Tourists may only have to wait a few years, according to an announcement from the Gateway Foundation. The group have unveiled sky high plans for a commercial space station, the world’s first extraterrestrial hotel.

Architect Tim Alatorre was inspired by the rotating designs of scientist Wernher von Braun. Hence the Von Braun Space Station, a wheel measuring 623 ft in diameter. It will host 24 pods for the ultimate in human habitation, accommodating approx. 400 with 100 guests arriving per week following the prospective launch.

View of what the Von Braun space station will look like. Photo from the Gateway Foundation

The hotel will be a one-stop destination for leisure-seekers and business travelers. People even have the option of living permanently amongst the stars. Business Insider writes that Gateway plan “to sell modules as private residences, rent out others to governments for research purposes and turn the remaining, well, space, into a luxe hotel.”

A major selling point is artificial gravity, seen as unnecessary at locations such as the International Space Station but essential for a comfortable stay. In an interview with Dezeen, Alatorre highlights astronaut Scott Kelly’s 12 months aboard the ISS, saying it “made clear that long term habitation of space in micro-gravity is not sustainable.” 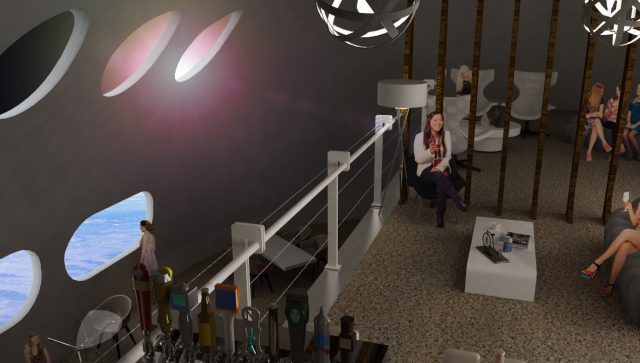 Rendering of the space bar. Photo from Gateway Foundation

Simulated lunar gravity ensures that arrivals won’t be too busy finding their feet to enjoy the (literally) stellar views. It will also make awkward matters such as showering or going to the toilet a whole lot easier!

Another space-bound tradition being dispensed with are the aesthetics. Many consider the movie 2001 by Stanley Kubrick (1968) as a benchmark in practical design. However for Alatorre that stark white environment of the future is now a thing of the past. “As humans, we innately connect to natural materials and colours,” he says, with Dezeen describing the overall concept as “homely”. 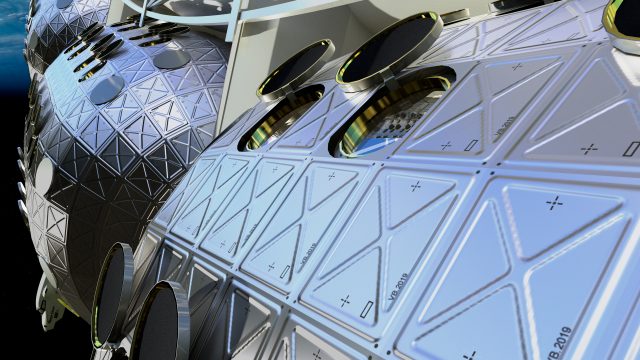 The Von Braun may be more akin to a log cabin than a space station, with “lightweight, easily cleanable natural material substitutes for stone and wood that would normally not be feasible to bring into orbit”. 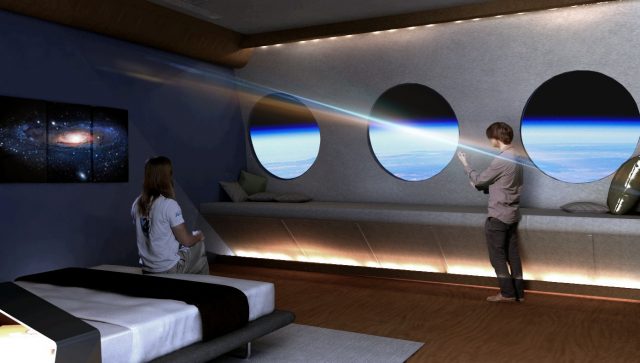 A room in the space station. Photo from Gateway Foundation

Another comparison being mentioned is that of a cruise ship. But it’s not all dining and decadence. For those who want to keep fit, sporting activities like basketball and rock climbing are on offer. In an exciting twist these can be done at low gravity, giving regular visitors the ability of a world pro without the years of training and aching limbs.

Close up of the top of the station. Photo from Gateway Foundation

The Von Braun seems even more sci-fi with the news it will be put together by robots and drones, though presumably the parts will be manufactured this side of the atmosphere.

Coming back down to Earth, the naming of the hotel after Von Braun may be seen as controversial by some. The former director of NASA’s Marshall Space Flight Center is certainly an apt choice, with his ideas fuelling the project in the first place. Yet his early background with the Nazi Party could cause some to feel uncomfortable. Still, the whole point of this epic tribute is to look forwards rather than back.

The Foundation are aiming to open the Von Braun in 2025. There are also plans to launch 2 other stations by 2030, with the trio hosting thousands of eager space travelers.

Cost is clearly a defining factor – such an experience won’t come cheap. A case of one small step for Man and one giant bill for Mankind. But it’s hoped as time goes on, leaving Earth will be as commonplace as jumping in a car to Disneyland. With corporate entities such as SpaceX developing commercial space flights, the idea is for everything to come together sooner rather than later.

“The dream of the Gateway Foundation is to create starship culture,” says Alatorre, “where there is a permanent community of space-faring people living and working in Earth’s orbit and beyond.”