Recreated Face of Scottish Highlander Inside the “6-Headed Burial”

A bizarre 6-headed burial has revealed the face of one of the men inside. Want to look into the eyes of a 15th century Scottish warrior? A small church has been yielding historic treasures for years, and now thanks to modern technology experts are putting meat on those bones.

The crypt of the old Tarbat Parish Church was where the complete skeleton of a powerfully-built individual was found. Located in the fishing village of Portmahomack, Easter Ross, the scene was excavated between 1997 and 2007.

Nearly 200 skeletons of all ages have been unearthed, but this dramatic discovery of a 6-headed burial is of particular interest. Live Science describes “the craggy, freckled face” of a no-doubt fearsome opponent, saying the team have created a “highly detailed and glowering visage that included a generous, ginger neck beard.”

The recreation – by Face Lab at Liverpool John Moores University – is unmistakably a man, believed to be a middle-aged (in modern terms) clan chief. And what’s more, he had company. 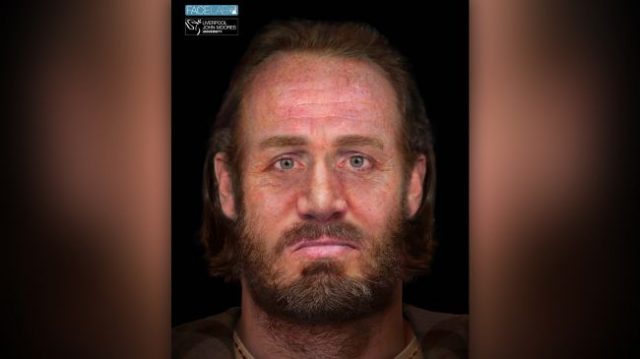 Sharing the cold, hard ground was the skeleton of another man, who he’d been placed on top of. In a morbid yet fascinating development, four other people were crammed into the coffin, creating a 6-headed burial. How was this done? These were “Four skulls without their lower jaws” who were “arranged in the grave around the man’s head”.

What is the significance of this? That’s what FAS (Field Archaeology Specialists) and the University of Bradford are hoping to shine a light on, using resources such as these newly-rendered features.

Dr Jessica Liu and Dr Sarah Shrimpton of Face Lab were responsible for bringing history to vivid life. Using datasets – essentially collections of data that can be manipulated by a computer – of “modern European faces”, they went on to sculpt a digital model. 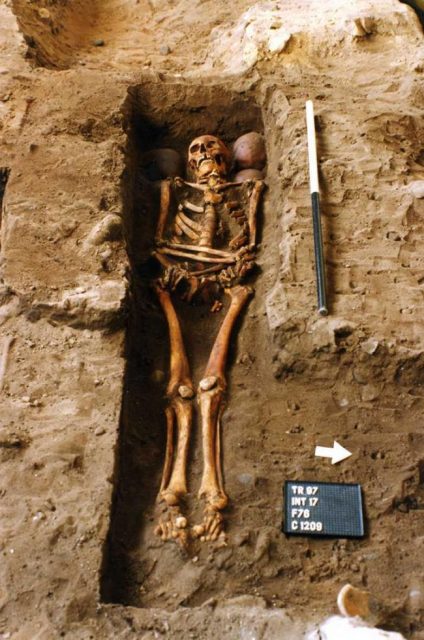 Dr.Cecily Spall of FAS was quoted by The Scotsman, saying “the men and skulls were buried in the most prominent part of the church, in the mouth of the crypt directly under the nave. At this time, burials were incredibly orthodox so this deviates massively from what you would expect to find.”

Surprisingly the two men were not buried at the same time, with as long as a generation elapsing before the grisly add-on. “The skull of the first man was moved to the foot of the coffin to make way for the second man’s head, which was then also surrounded by the extra skulls” Dr.Spall said in Live Science.

The thinking is that the complete skeletons are high-ranking remains. As for who they are, and who the skulls belong to, investigations are ongoing. “Are these men related?” Dr.Spall asks in a BBC article. “Are they father and son, brothers, or are they clan chiefs who were related to each other, or are they rivals?”

DNA evidence will hopefully be uncovered under closer analysis. Techniques such as radiocarbon dating are being applied to unlock the mysteries of the mass grave. 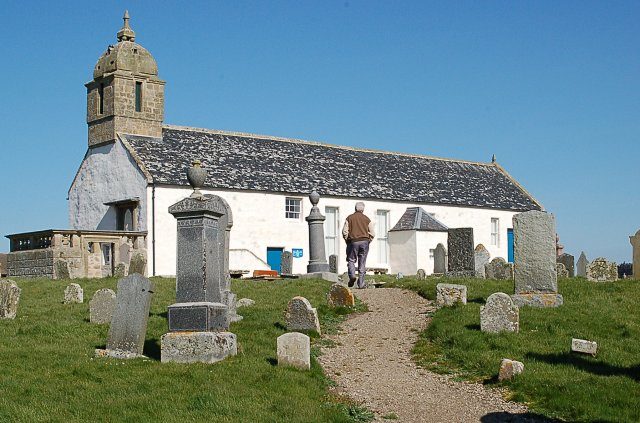 Old Tarbat Parish Church in Portmahomack, Scotland where the find was made. Photo by Jim Bain CC by 2.0

In the meantime there’s a sizeable something to go on, in the shape of a well-known historic feud. “Clan Ross and Clan Mackay fought out a terrifying rivalry in the area that arguably peaked with the Battle of Tarbat in the 1480s,” writes The Scotsman.

Clan Ross apparently cornered a raiding party of Clan Mackay with many losing their lives in the encounter. Survivors of the attack sought sanctuary in the church, but the Rosses set fire to it. All who were inside perished.

Related Article: Prague Castle Skeleton Identified that was used for Both Nazi and Soviet Propaganda

Naturally the two men suffered what appear to be brutal fates. The original occupant had lost the bottom half of his face, presumably under a warrior’s blade. The later skeleton has a cut above the left eye.

Dr. Spall wants to look beyond the violence and obtain a snapshot of life back in the 15th century. “Across the Highlands, these finds can make a real contribution to the understanding of these men and how they lived,” she says. “We think we understand Scottish identity but here we have facts on the ground which will help us furnish a more realistic understanding of this time.”