No sword is quite like Viking swords. During the period between 800-1200 AD, large numbers of Scandinavians began leaving the lands of their birth in search of a better life. The Vikings took to the seas and began raiding coastal areas in search of spoils and resources. At that time, Vikings raided, traded, and sometimes settled across the British Isles and throughout much of Europe. They also ventured to Newfoundland, Russia, Iceland, and Greenland.

ERR, the English-language service for Estonian Public Broadcasting, reported an unusual find last week. Archaeologists uncovered two caches holding the fragments of approximately 100 Viking swords. The discovery was made in the northern part of the country, in the area which held the territory of the old Estonian country of Ravala.

The fragments were in two separate caches, but the sites were located close to each other. Inside there were a multitude of items, most of which were fragments of broken swords and a few spearheads. 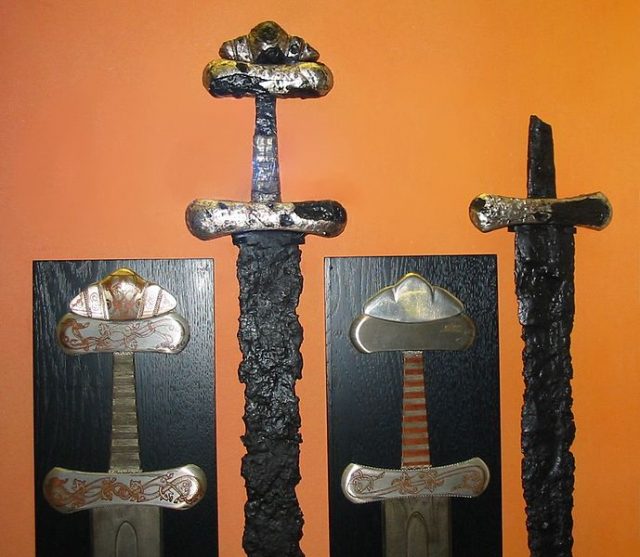 Two sword hilts on exhibit in Hedeby Museum. The sword on the left is from a Viking Age burial at Busdorf, Schleswig-Flensburg; Petersen type S, with silver and copper inlay work. Photo by viciarg ᚨ CC by 2.5

Archaeologist Mauri Kiudsoo, keeper of the archaeological collection of Tallinn University, said that the two sites were only about 80 meters apart. The swords appear to date from the middle part of the 10th century and were probably used as cenotaphs, grave markers for people who were actually buried somewhere else, such as those who fell in battle and had to be buried where they were or those who died while elsewhere on missions of trade or diplomacy. 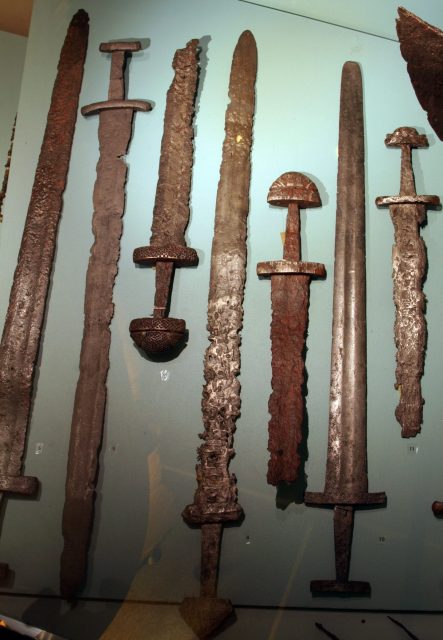 The reason the swords were in pieces, according to Kiudsoo, is that the practice of the time involved burying weapons that were broken or otherwise beyond use.

Despite the fact they’re in pieces, historians could still easily identify what sort of weapons they were by looking at the shape of the grips. The grips revealed that the swords were H-shaped, double edged swords of the type that was most common during the Viking era. Hundreds of swords of this type have already been found in various parts of Northern Europe. 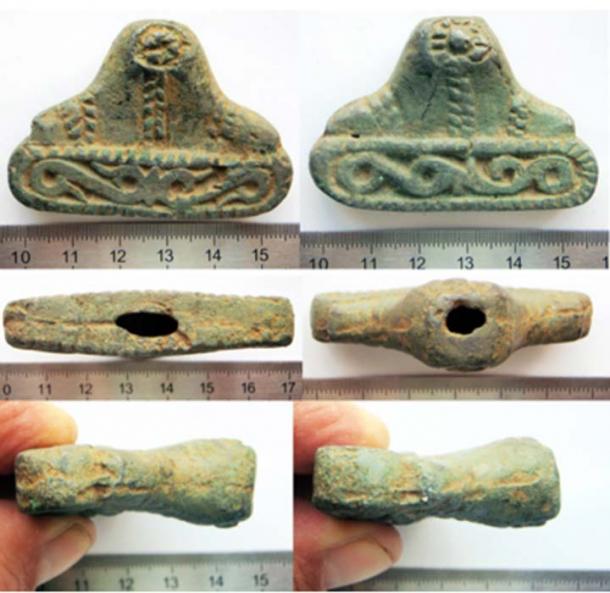 The Viking sword hilts found in Estonia. (Estonia Dept for the Protection of Antiquities / ERR)

By 1991, eight more-or-less intact examples of this type of sword had already been discovered in Estonia, and the number has risen to around 100 in the years since then. Such relics are usually discovered along the country’s northern coastline, near an important trade route for the Vikings.

Historically, Viking warriors were known to raid the area which is now Estonia, according to Ancient Origins, and they erected hill forts and outposts for trade in the vicinity. They were always located near the coast, however, as the marauding Vikings never made any significant advancement into the country’s interior, which was held by Finnic tribes.

This find represents the largest of such caches ever found in Estonia, but, more importantly, according to Kiudsoo, the grips were what allowed archaeologists to determine what type of weapons they were, and, by extension, to have firm proof that the H-shaped weapons were in use in the area during that time.

By the middle of the 10th century, the Danes had been Christianized and united under one king, according to History; at the same time, a second Viking age began with increased large scale raiding on the coasts of Europe and Britain, driven by successful military action in a number of parts of Europe and taking advantage of political instability.

Estonia served as a staging post for the trade routes that went through Russia to Persia. The Vikings first came to raid, but eventually they ended up establishing trade relationships with the natives and even established some permanent trading posts.

Perhaps finding the two caches of sword fragments will stimulate further investigation and excavation in the area, leading archaeologists to new finds and a deeper understanding of both the Vikings and of what life was like in Estonia during that period of time.