A Roman shipwreck has been discovered off the coast of the Mediterranean island of Cyprus. Protaras, on the southeastern coast of Cyprus, is known for its pristine beaches and luxurious resorts, but what most visitors don’t know is that not too far away lies a recently discovered two thousand year old shipwreck of Roman origin that has never been disturbed.

Throughout history, according to Smithsonian.com, Cyprus has been a desired territory because of its strategic location for maritime trade. It has, at various times, been ruled by Greeks and Persians prior to its adoption by Rome in about 58 B.C. Cyprus became quite prosperous under the rule of Rome. 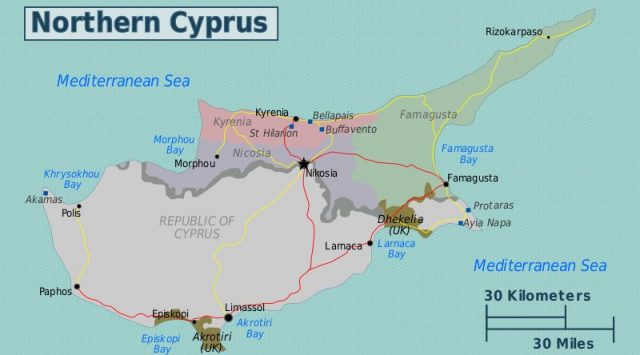 According to Live Science, Spyros Spyrou and Andreas Kritiotis, who volunteer their time to dive for the underwater archaeological research team of the Maritime Archaeological Research Laboratory at the University of Cyprus, found the wreck in the summer of 2019.

Two teams were immediately dispatched so the Roman shipwreck could be protected and studied in situ, Latin for “on site”, before anything was moved. One of the teams is led by Dr. Stella Demesticha, Associate Professor of Maritime Archaeology and the other is led by Dr. Dimitris Skarlatos, Associate Professor in the Department of Civil Engineering and Geoinformatics, Cyprus University of Technology, and Eleni Loizides, Conservator at the Department of Antiquities. 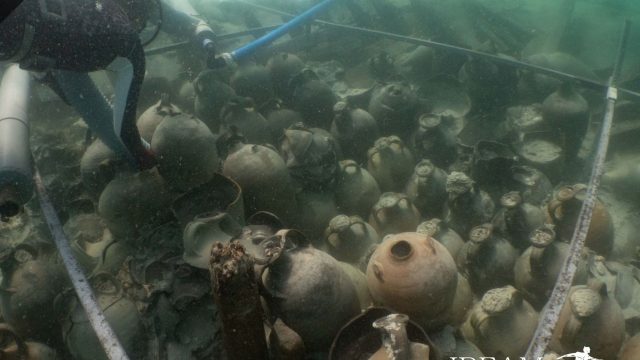 Experts believe that the ship was carrying a cargo of oil, wine and fish sauces. (Consell de Mallorca/IBEAM)

The Roman ship was full of amphorae, large jugs that usually held about six gallons, mostly made from ceramic or terra cotta, with a narrow neck and handles on either side; they were regularly used to carry trading goods such as olive oil, wine, grains, and other bulk goods. The Cyprus Department of Antiquities notes that the trading ship was probably from the area of Syria and Cilicia along the Mediterranean coast in Turkey which was part of the Roman Empire. 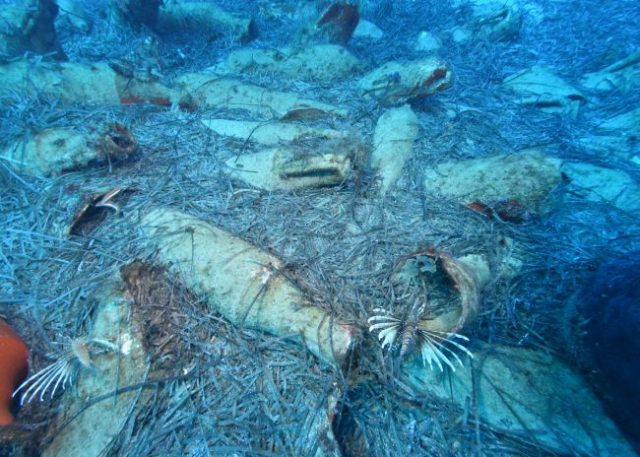 The remains of the amphorae from the ancient shipwreck, which was found off the coast of Protaras in southeastern Cyprus. (© Courtesy of the Department of Antiquities, Republic of Cyprus)

The Mediterranean region is full of ancient shipwrecks, but researchers are hoping that this undisturbed wreck will provide additional information regarding trade during Roman times and the importance of Cyprus as a Roman trading port. One of the most exciting things about this wreck is that it is the first one found in Cyprus that is in excellent shape and completely undisturbed, according to Cyprus Mail.

It is also the first such archeological study completely funded by the Department of Transport which, according to the Department of Antiquities, acted with speed and decisiveness to procure the finances for the research. The department also notes their appreciation that Spyros Spyrou and Andreas Kritiotis reported their find so quickly, enabling the protection of the wreck.

For the past eight years, another ancient shipwreck from the late classical period of Greek history was found in Mazotos, a quiet holiday and retirement village on the seacoast. The Mazotos Shipwreck was carrying amphorae from the 4th century BC and ninety-nine full and partial jugs were found under the foredeck of the hold alone, one of which was full of olive pits which were presumably from olives the crew had eaten. The jugs were Chian, from the Greek island of Chios which exported the finest wines, the first red wines known, and was written about in Greek mythology. Fine wines are still produced on the island.

In 2010, the Laboratory for the Conservation of Maritime Antiquities was created by the Department of Antiquities in Cyprus to store and conserve the relics brought up from the Mazotos and other shipwrecks found at the bottom of the Mediterranean.

These two shipwrecks as well as others found in the area are bringing together students, volunteers, and researchers from many different countries, and Cyprus is showing the world the importance of protecting the cultural heritage of its people by its quick response to the reports of hidden history both with teams of scientists and financial backing.