If James Bond had a house today, The Gunnery would be it. One of the things that having a lot of money makes possible is having the ability to live anywhere you want, which can include some interesting and unusual places.

According to the Daily Mail, if you have an extra $7.6 million laying around, you now have the opportunity to buy a gorgeous, modern house which sits on what used to be a British artillery site during the second world war.

The residence is called The Gunnery, and it’s located in Kingsdown, Kent, on top of a 90-foot chalk cliff. The original gun emplacement was rapidly built in 1940, while British troops were pulling out of Dunkirk, to defend Britain from a German landing. It was decommissioned after the war and is currently owned by a pair of property developers, Garfield and Vanessa Spencer. All images below provided by the realty firm Strutt & Parker. 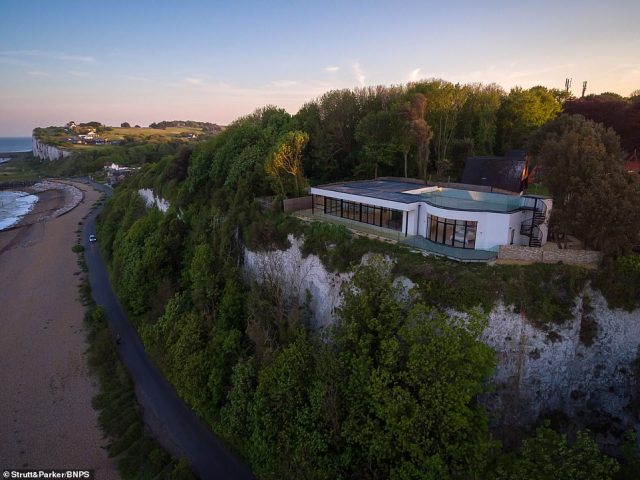 The Gunnery, near Kingsdown in Kent offers incredible views of the English Channel

The Spencers had plans to demolish the ‘80s-era house which currently stood on the property and replace it with something special, according to the Telegraph, and, in 2015, after three years of effort, they obtained the needed planning permissions to demolish the existing structure and build afresh. 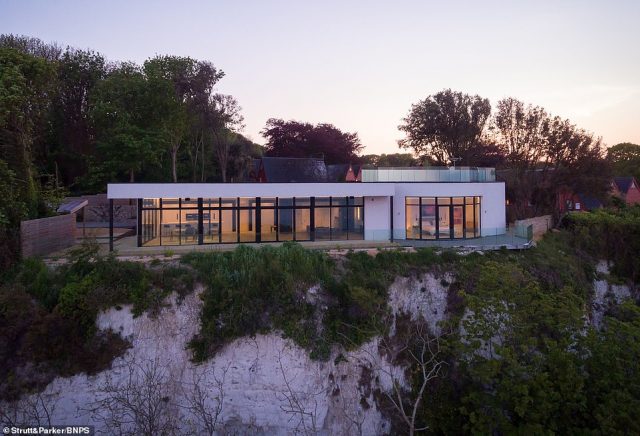 IT was once home to a British gunnery that was hastily built as troops were escaping from Dunkirk.

They worked with an architect named Fred Courtney Bennet in designing the house and managed to incorporate several of the original look-out points into the design for the new home. Judi Watkinson, a Brighton-based interior designer, and Sian Baxter, a lighting expert from London, also played huge roles in bringing the Spencer plan to fruition. 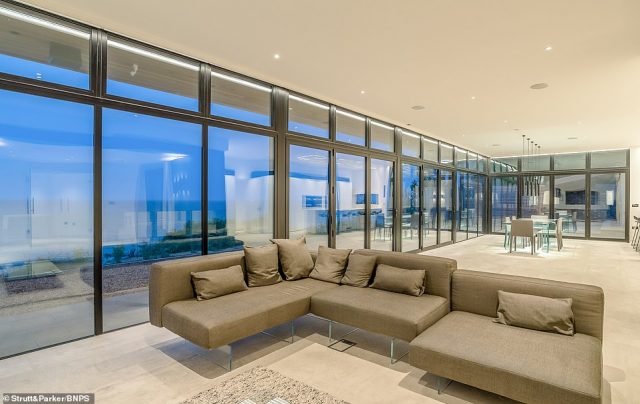 Living room of the property. The original gun loops can still be seen.

They finally completed their project early this year, and the Spencers, who are both English-born but reside in America, had been using it as a vacation home prior to their decision to sell the property. 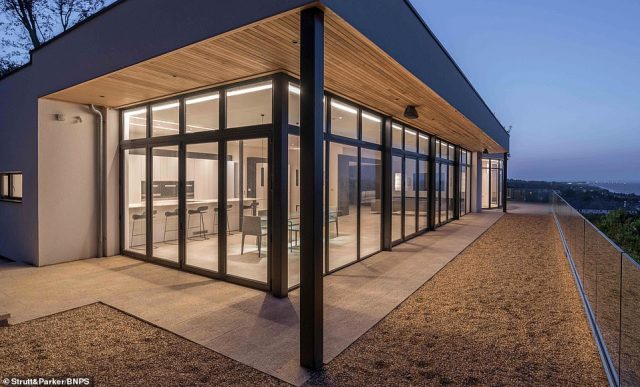 The unique property is accessed by an underground tunnel that leads through the cliff to a glass elevator which goes up to the house.

The home is a truly remarkable property with a James Bond feel, according to Edward Church, a representative of the estate agents handling the listing. Parking is at the bottom of the cliff, and to enter the house you walk through an underground tunnel which takes you to an elevator which carries you to the house itself. The elevator is glass, allowing you to see the chalk-cliff blocks as you make the ascent. 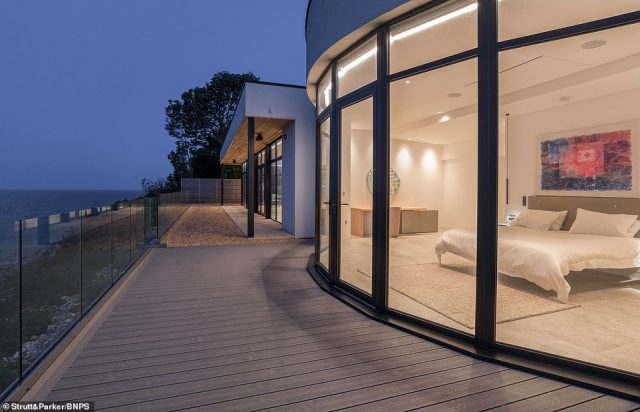 Another secret tunnel inside the home, which is just a few feet from the cliff, provides access to a home cinema.

There’s a second secret tunnel which provides access to the home theater. It all has a very “secret agent” vibe. The property includes six acres of beach and, although it sits near the edge of the cliff it rests on, the sea doesn’t come near enough for there to be any threat of erosion. 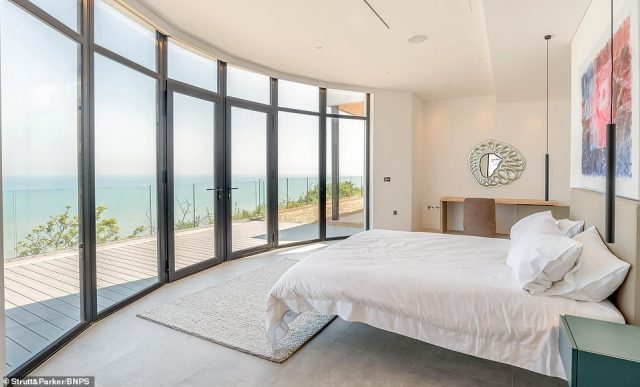 Living and sleeping on history

Most of the walls which face the sea are entirely made of windows to let you take advantage of a truly spectacular view which encompasses the White Cliffs of Dover and the English Channel, with France on the other side. There is a modern kitchen, a dining area, and a wine cellar, as well as four bedrooms, a cloakroom, a study, and a plant room. 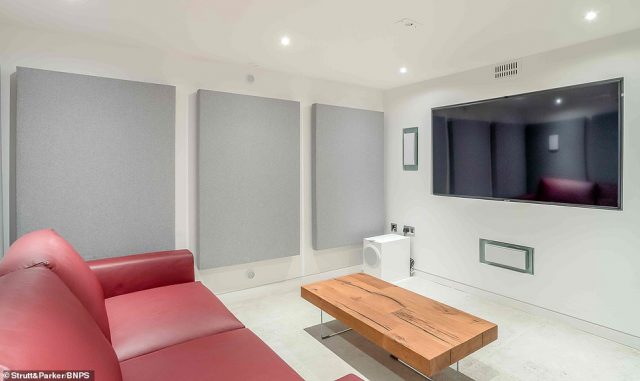 The living room is spacious and full of natural light from the wall of windows, and there is an openness about the entire space which would be equally suited to privately relaxing or entertaining. There are extensive patio areas around the property, with glass barriers providing an extra measure of security without compromising the view. 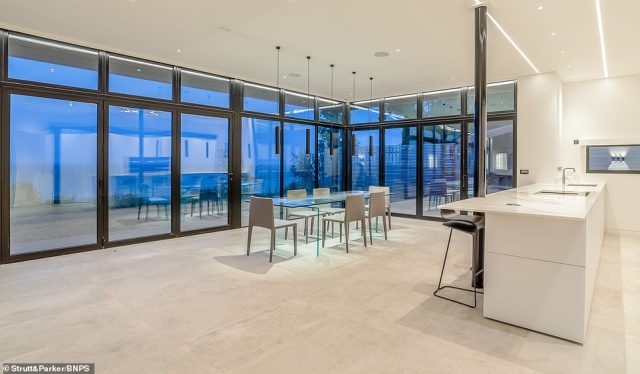 The property also has a modern kitchen, dining area and wine cellar, to go along with a study, greenhouse and cloakroom. 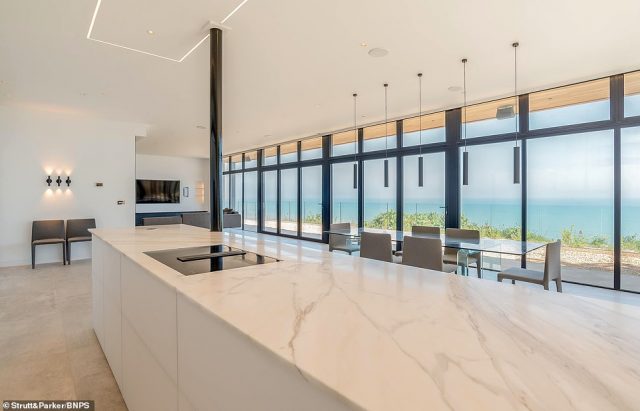 If the gorgeous location and the cool tunnels aren’t enough to sell a prospective buyer, the house has also been equipped with a great deal of modern tech, which only serves to reinforce the 007 feel of the place. The master bedroom features a flat-screen television which descends from the ceiling, for example, and all of the lighting is sensor-controlled and can be manipulated from one’s smartphone. 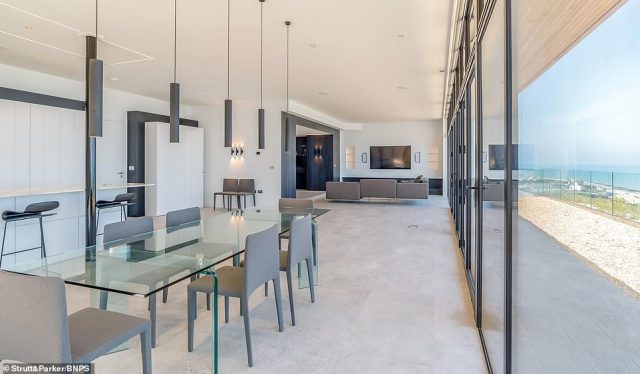 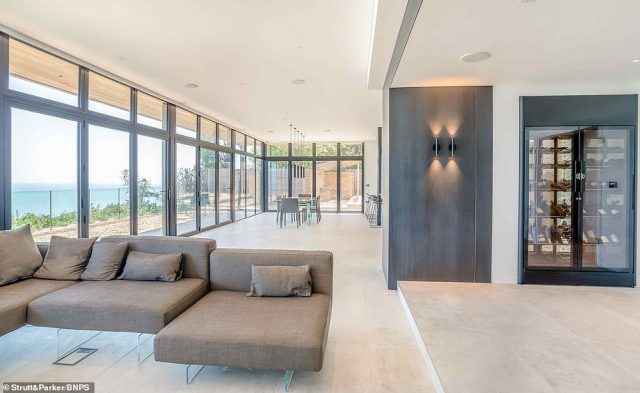 Garfield Spencer observed that he loves the house’s technology nearly as much as the view, since the couple’s primary home in Connecticut is 100 years old and can’t incorporate as many cool new gadgets as this property. He further said that, while he wouldn’t say how much it cost to build, The Gunnery was more expensive than they anticipated when they were fitting it out.

Related Article: Retro Monolithic Dome House for Sale – Totally Out of This World!

The decision to sell it came when they realized that they couldn’t spend enough time there to justify continuing to hold on to it. If you’re interested in making an offer and living in a house fit for James Bond, the listing has been done through Strutt & Parker.