The mystery of Egypt’s oldest pyramid and the pyramids in general attract millions of visitors and tourists each year. They are one of the most awe-inspiring wonders in the world, and experts consider them miraculous feats of engineering and architecture that even people in those fields are hard pressed to fathom.

As they were constructed so many centuries ago, their shape and size make them even more impressive.

The Step Pyramid at Saqqara, however, is even more impressive, perhaps, than other pyramids. It is the oldest one in Egypt, and set new standards in design and construction that had been unthinkable before its architect, called Imhotep, implemented his vision for King Djoser.

Stepped Pyramid of Djoser at Saqqara in Giza. Photo by Mariam Mohamed Kamal CC by SA-3.0

It wasn’t only the pyramid that was remarkable, but the complicated network of buildings beneath it, including temples, tunnels and chambers, that were unheard of until the Step Pyramid was constructed. What was built below eventually became the size of a small city. Some of its buildings include the House of the North, the House of the South, the South Tomb, and many other structures.

However, the most that researchers, historians and Egyptologists can do is speculate about the Step Pyramid, because not a single text of any description about its construction has ever been found. Hence, there are no written clues that can inform archaeologists about how the complex was built, and what led its renowned architect to use massive stones, rather than a substance made of mud and brick. 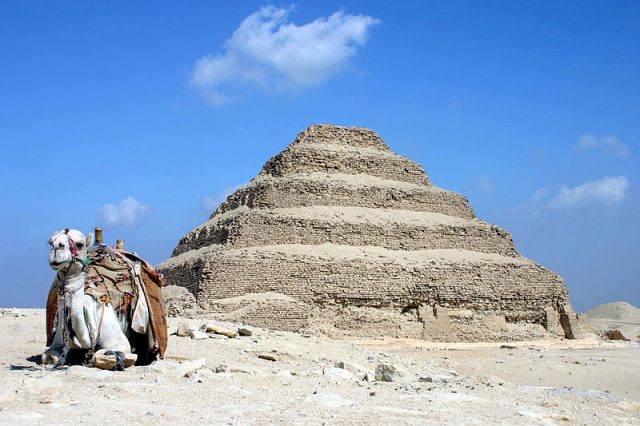 The latter was the common construction material of the day, yet the Step Pyramid was built with massive stones. Today, experts theorize that special ramps were used to get the huge stones into place, and then secured.

Just to make the mystery of the Step Pyramid even more odd is the fact that the mummy of King Djoser, the ruler who commissioned the project, vanished from its resting place in the chamber below — perhaps centuries ago. 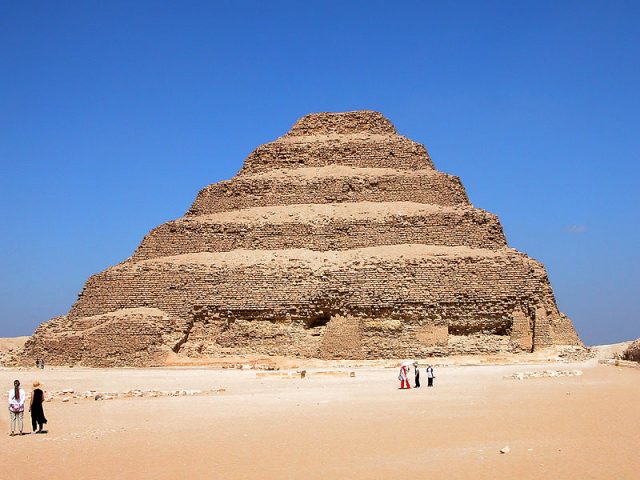 Step pyramid of Djoser with people near it. Photo by Dennis Jarvis CC by SA-2.0

Although the complex and the web of corridors and passageways below were designed by Imhotep to discourage thieves, archaeologists realized quickly upon its first serious excavation, in the 1920s, that King Djoser’s mummified remains had been tampered with. (The robbers left only one foot.) Many of the jewels and other sacred objects he had been buried with had also vanished.

The Step Pyramid was first explored by Napoleon’s men, during his Egypt campaign, between 1798 and 1801. Thereafter many experts from countries as far away as Germany and Prussia went to the site. But it wasn’t fully excavated until the 1920s, by a team of archaeologists from England.

Cecil Firth, and French archaeologist and Egyptologist Jen-Phillipe Lauer, spent the following five decades unearthing the site, and restoring all they possibly could. It was their teams that were largely responsible for introducing the fascinating history of Egypt in general, and the Step Pyramid in particular, to the Western world.

But why there is no written record of the pyramid’s construction methods remains a frustrating mystery to historians and archaeologists alike.

But examining Egypt’s oldest pyramid has led to at least some conclusions about Imhotep’s designs and approaches to building. In the Ancient History Encyclopedia, Egyptologist Miroslav Verner noted, “a simple but effective construction method was used. The masonry was laid not vertically, but in courses inclined toward the middle of the pyramid, thus increasing its structural stability.”

In other words, Imhotep intended this awe-inspiring series of building to be more than a testament to his king. He meant for it to last for many centuries, and of course his unique ideas and forward-thinking approach to building ensured just that.

Even today we “wow” over the stunning architecture of all Egypt’s pyramids. Perhaps not knowing all of their mysteries is for the best, because it certainly adds to their allure, and their mystique.