Sweet treats are an important part of any Christmas meal, and making and decorating a gingerbread house has become a fun holiday tradition in many families, at times becoming incredibly detailed, large, or in this case, small.

The gingerbread house made recently by a Canadian scientist at McMaster University in Hamilton, Ontario, is not one to be gobbled down; in fact, it’s impossible to see in detail without the aid of a microscope. And eating this particular gingerbread house would be most unwise; it’s made entirely of silicon.

Travis Casagrande is the ingenious electron microscopy scientist behind this seasonal project. In an interview with CBC Canada, Casagrande explained, “Compared to the size of a typical gingerbread house you might buy in a grocery store kit, mine is 20,000 times smaller.” He went on to say that, by comparison, his house is about one-tenth the width of a single strand of human hair. Not only is his gingerbread house likely the smallest one ever made, it sits atop a teeny, tiny snowman, also microscopic in size. 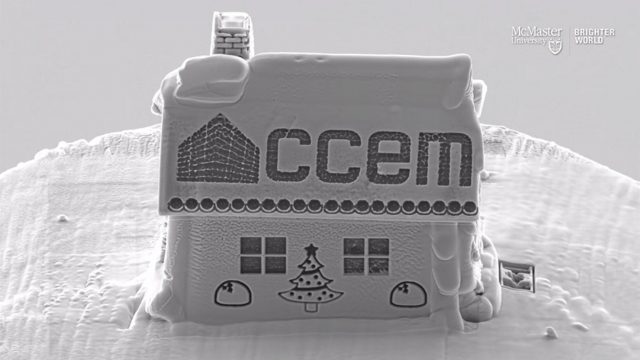 Casagrande did not build the house solely to get into the festive season; he did it, in part, to demonstrate in lay terms just what electron microscopy is, and what the technology is used for. In medicine, it is used to develop the image of an object, then magnify it as much as two million times. This allows doctors to see exactly how many cancer cells exist in a particular area, for example. That’s just one example of the benefits of electron microscopy. 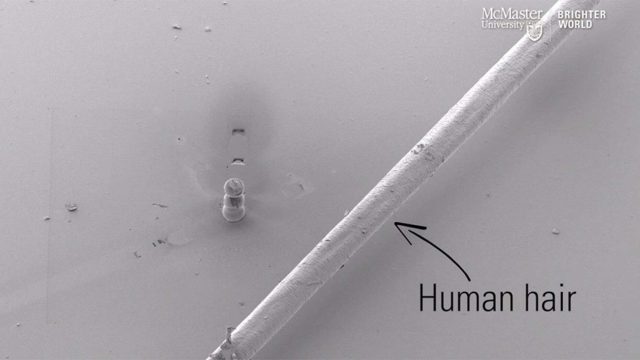 The house is around 10 times smaller than the width of a human hair. (Canadian Centre for Electron Microscopy/McMaster University)

Another area of research the lab performs is in materials used in manufacturing and housing. Casagrande said that his work offers insight into how builders can use materials that will last longer, a benefit in monetary and environmental terms.

“We are helping researchers understand the structure and properties of materials,” he began, “and this is in order to solve problems and make things stronger, lighter, last longer, (be) more affordable, (and) more efficient.”  Those are the qualities developers seek when putting up new, less expensive and more durable housing. 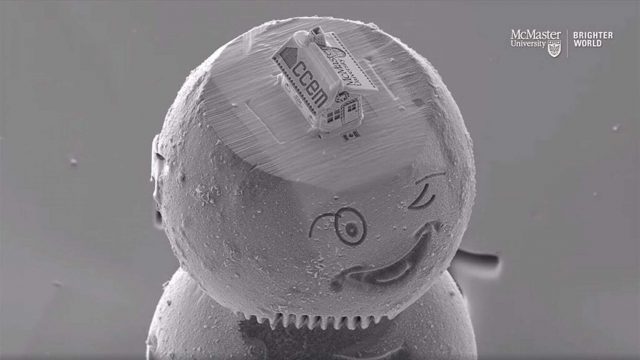 Casagrande told the CBC that the project also helps demonstrate to anyone unfamiliar with his field how it works. Creating it took two days, and although it sounds almost whimsical — a tiny gingerbread house and snowman for the Christmas season — it was in fact quite difficult. 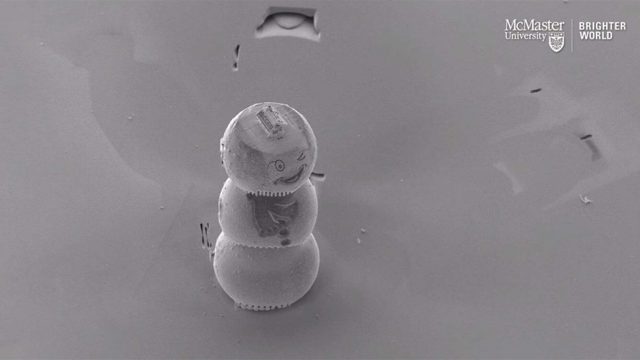 “There are a lot of opportunities where things can go wrong in the making of this — and they did,” he admitted. “There’s no ‘undo’ button.”

Placing the house and snowman next to the hair was a way to demonstrate scale, he added. “The point of that,” Casagrande explained, “was to make some jaws drop when you realize even the snowman, which is much bigger than the house, is extremely tiny compared to the hair,” when you see them side by side. The video showing the incredible creation can be seen below:

Love gingerbread houses but too many calories? The CCEM’s got you covered! The world’s smallest “gingerbread” house was created in our FIB by staff Research Associate, Travis Casagrande. Here’s how it was made: https://t.co/A2qxk21lLb
Don’t miss the ending! (no spoilers!)

Curiously, it wasn’t the tiny house or the items that adorn it, like a wreath and a Canadian flag, that gave Casagrande and his colleagues the most trouble. It was the round “balls” that comprise the snowman’s body. “Some of the construction of this was quite unconventional,” Casagrande said, “…I had to come up with some new techniques”.

This project is not Casagrande’s first that used his lab’s electron microscopy to demonstrate how the technology works. In 2017, the lab created a tiny flag sitting atop a Canadian penny, to honour the country’s 150th birthday.

“We wanted to spark scientific curiosity for the general population, for kids who are thinking of careers in science, or even for adults.” To that end, Casagrande made sure his creation is not just amazing, it’s endearing — the snowman is even winking.