Era-defining astronaut Buzz Aldrin just turned 90 and photos of him on the moon just got the hi-def treatment to mark the occasion. A special surprise was waiting for blast off on Buzz’s special day. The offbeat combination of 2 Brits – archivist Stephen Slater and property developer Andy Saunders – led to the iconic 1969 Moon Landings being rendered in sparkling high-definition.

This meteoric space event celebrated its 50th anniversary last year, so what better way to preserve the Landings for coming decades… as well as giving the veteran space traveler a lift!

It all centers on last year’s documentary Apollo 11, made by Todd Douglas Miller. The acclaimed production presented NASA archive material in a way never seen before, with footage painstakingly restored for modern audiences. Some of it had been unseen up to that point, thanks to Slater’s intensive work.

Now more images have been released for Aldrin’s birthday, one of which even shows his face under the helmet. Possibly the ultimate lunar memento! 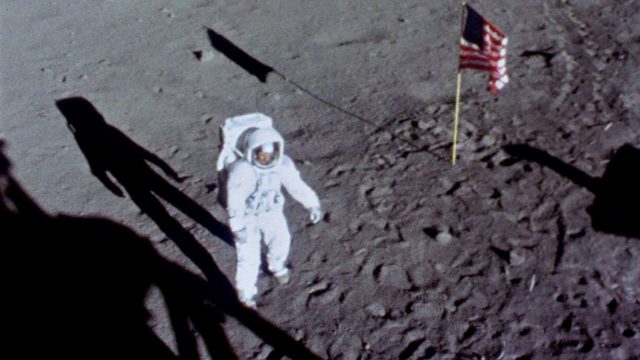 Slater hails from Sheffield, and local paper The Star (appropriate title) wanted to talk to him about the project in 2019. “What you had before had this murky quality and felt like archive footage, but this doesn’t,” he told them. “It feels like being in the room with them and experiencing the mission as they did.” 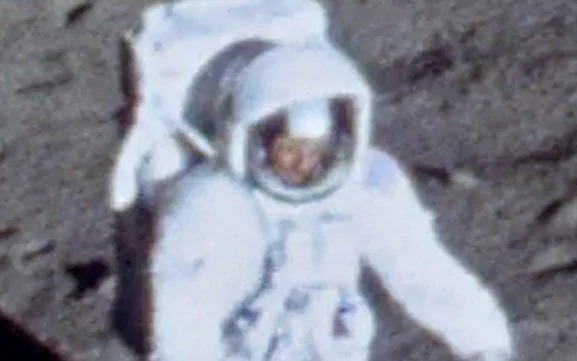 Audiences at the Sundance Film Festival were reportedly in tears at the awesome spectacle. “It’s the kind of story we need in this climate,” Slater added. “It’s so inspiring and shows what we can achieve when we’re not having a go at each other.” Slater’s interest in all things stellar stemmed from viewing Ron Howard’s Apollo 13 (1995) during his formative years.

Fellow restorer Andy Saunders spoke to Fox News this week about the latest out-of-this-world snaps. Saunders’ work on the photos of Buzz Aldrin saluting his country’s flag against the blackness of space is a stunning fragment of remastered history. He talks about the process, which gave him “the opportunity to actually lift 13 separate frames which could be stacked to improve the signal/noise ratio and push the processing as hard as possible to reveal some terrific detail.” 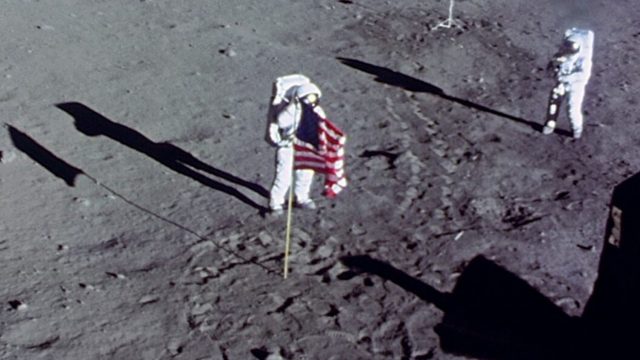 It may sound technical to some, but the outcome is undeniable. As Saunders mentions, “You can even clearly see Neil [Armstrong] holding the camera the moment the infamous photograph is taken.” Another shot of Aldrin and the flag was enhanced to bring out the astronaut’s features. Certainly something to shut up naysayers, who believe the landings never occurred.

Though they’re probably careful about saying that around the man himself. In 2002 he punched Bart Sibrel, another documentary maker who, unlike Slater, didn’t exactly endear himself to the NASA legend. Sibrel approached Aldrin, asking him to swear on the Bible that his fantastic voyage was true. According to the website CN Traveller “he went on to call Aldrin ‘a coward, and a liar, and a thief.’” Following that he could also call him a bruiser, as his target responded with knuckles instead of words.

There are countless gags about Aldrin being second man on the Moon after Neil Armstrong, but his legacy is assured. He took to Twitter for this playful post, typing “Today is a special day. When asked for my birth date, I chuckle and say 1-20-30. Now, after circling the sun for 90 years, today is 1-2020. I came into this world in NJ on 1-20-30, and my mother was Marion Moon Aldrin and my father Edwin Aldrin. Here’s to 1-2025!”

What with America’s new “Space Force”, plus the ongoing corporate battle to place tourists amongst the stars, leaving Earth’s atmosphere is as burning an issue today as it ever was. Aldrin was one of the first to brave the ravages of space, gaining some incredible memories along the way. These revitalized photos of Buzz Aldrin must have stirred a few of them…