The trial is underway for the theft of one of the largest gold coins in existence. In fact at one point it was the largest one. Mints produce coinage that do represent legal tender, but also create ones which are meant to commemorate something or to be collected.

In 2007 The Canadian mint produced a limited six-coin run of coins called the Big Maple Leaf.  The BMLs had a face value of $1 million, and at the time of their production, they were the largest gold coins in the world (the Perth Mint in Australia made a larger coin in 2012), being over an inch thick and about 20 inches across.

The coins were made of 99.99% pure gold, and each one weighed just over 220 pounds, according to the online coin collection site Edmonton Collections.  The back of the coins features an image of the Canadian maple leaf, designed by Stan Witten, and artist and engraver from the Canadian Mint, and the front holds a portrait of Queen Elizabeth II, which was designed by Susanna Blunt. 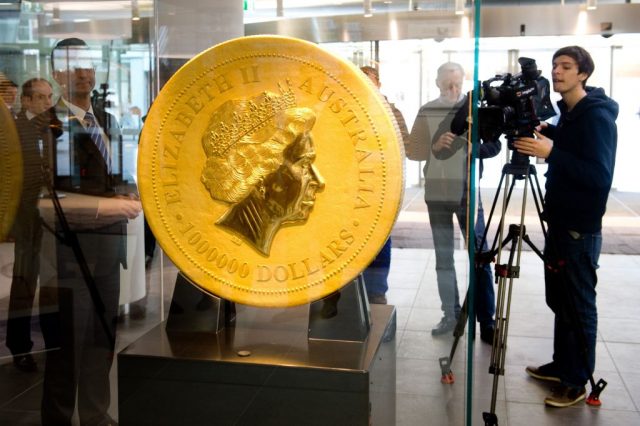 Journalists stand next to the world’s biggest gold coin, called the Australian kangaroo at the Baden-Wuerttembergische Bank in Stuttgart, Germany. The coin has a diameter of about 80 cm and weighs about a ton. The coin is worth more than 30 million euros. Photo: Sebastian Kahnert/dpa | usage worldwide (Photo by Sebastian Kahnert/picture alliance via Getty Images)

One of the BMLs was kept in storage at the mint, and the other five were made available for sale.  Of those five, one went to Queen Elizabeth, one was sold to a Spanish trading company called Oro Direct.  Two more were sold to unknown buyers in the United Arab Emirates, and the final coin by purchased by a Mr. Fuchsmann, who lent the coin to the Bode Museum in Berlin in 2010.

In March 2017 the BML on display at the museum was stolen.  A group of thieves got the coin out a window, down a ladder, and into a waiting vehicle to be carried away. Four men believed to be involved in the heist were eventually caught, but the coin itself was never recovered.

It’s unlikely that the coin can be found.  Despite its face value being $1 million, the quantity and purity of the gold it was made of give it an actual value of somewhere in the area of $4 million, depending on the price of gold at any given time.  It’s most likely that the thieves simply melted the coin down and sold it the gold off.

The trial for the men who perpetrated the theft is currently underway, and ABC News has reported that the prosecutors are pushing for lengthy prison sentences for the defendants. Berlin’s regional court has been asked to give two of the men seven-year sentences, and the other two men sentences of five and six years. 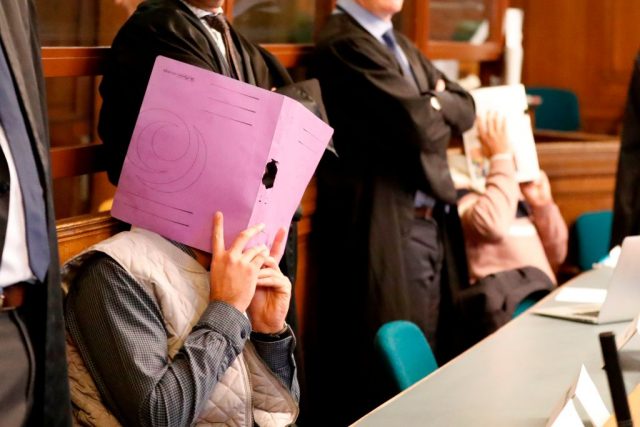 One of the defendants, Wayci R., hides his face behind a folder as he arrives for the opening of the trial over the theft of the so-called “Big Maple Leaf” golden coin from the Bode-Museum last year on January 10, 2019 at a court in Berlin. (Photo by Odd ANDERSEN / AFP) (Photo credit should read ODD ANDERSEN/AFP via Getty Images)

Three of the defendants, 24-year-old Wayci Remmo, 20-year-old Ahmed Remmo and 22-year-old Wissam Remmo, have been accused as having ties to organized crime, and the fourth man worked as a security guard at the Bode Museum where the theft took place. None of the accused men spoke out during the course of the trial, although their attorneys deny their involvement in the theft.  The verdict is expected to be announced in February. 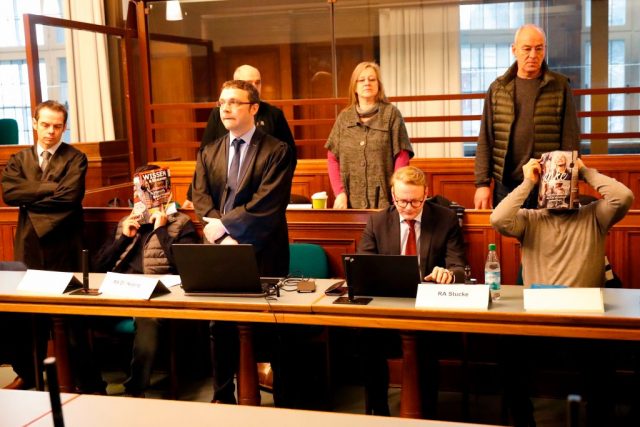 Two of the defendants, Denis W. (L) and Wissam (R) hide their faces behind folders as they wait for the opening of the trial over the theft of the so-called “Big Maple Leaf” golden coin from the Bode-Museum last year on January 10, 2019 at a court in Berlin. (Photo by Odd ANDERSEN / AFP) (Photo credit should read ODD ANDERSEN/AFP via Getty Images)

One might wonder why a mint would make such a large coin that is obviously unusable as pocket money.  The simple answer is that they were showing off.  The Royal Canadian Mint was getting to release a new series of bouillon coins.  The coins were remarkable in that the mint had figured out how to increase their purity from 99.99% to 99.999%, which was a new threshold across the industry.

There is a certain amount of competition among mints with regard to the production of bouillon coins, so when the RCM crossed the new threshold, they wanted to celebrate their achievement with something truly remarkable, hence, the creation of the BMLs.

The coins were carefully engineered and produced in a way that would guarantee the coins had the fewest possible imperfections, and were carefully hand-polished for maximum shine.  A spokesperson for the mint said that the coin was meant to be a one-off, to promote the mint’s new line of one ounce 99.999% bouillon coins.  When the first coin was unveiled, several people came forward expressing their interest in owning one of the coins, which is why the other ones were produced.

Bouillon coins are essentially a more visually interesting alternative to bars of gold, but they fill the same function.  They’re about investing, not spending.  The loss of the BML from the Bode museum may have its former owner rethinking the wisdom of that investment.