Check out the Exquisite Interiors Inside the World’s Oldest Cafe

Venice is home to the iconic Caffe Florian, billed as the world’s oldest cafe. And this year marks its 300th anniversary. Coffee is probably the oldest and most beloved drink in the entire world. We drink it in the morning to jolt ourselves awake, again at midday to get a boost of energy, and often again after supper, whether at home or elsewhere.

Yes, coffee is one thing people the world over, who seems to agree on little else these days, agree is an important part of 21st century living. Streets everywhere are lined with cafes where one can sit, sip a good, hot cup of coffee and just people watch, read a book, or check their phones. Coffee is an ancient brew that fits perfectly into our need to relax, unwind and take a breath in this hectic world.

One cafe has been serving exquisite coffee for 300 years now. Throughout 2020, Caffe Florian, in Venice is celebrating three centuries of serving coffee, baked goods, and other delights to locals and tourists. This much-loved institution of Venice life is located in St. Mark’s Square, making it an easy, accessible stop for just about everyone in Venice, whether they’re visiting or on their way to work. 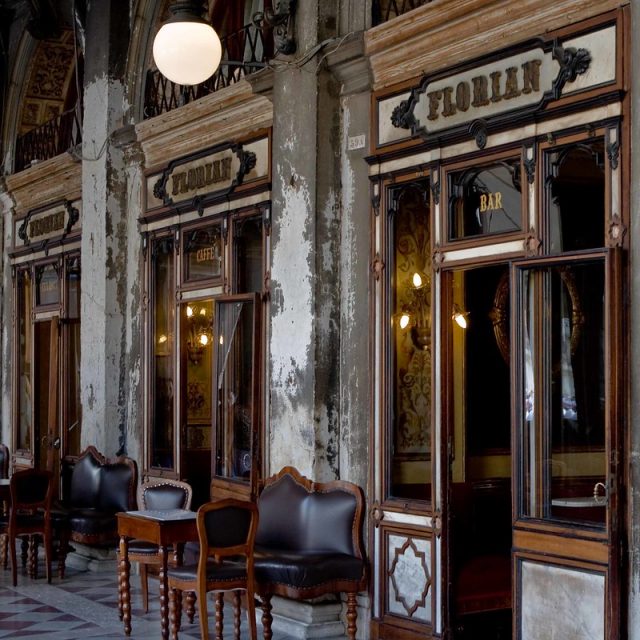 Outside Caffe Florian. Photo by Marja van Bochove CC by 2.0

Even if customers don’t drink coffee, Caffe Florian is such a landmark that folks flock to it, just to drink in its rich, artistic atmosphere and imagine the customers who came before. 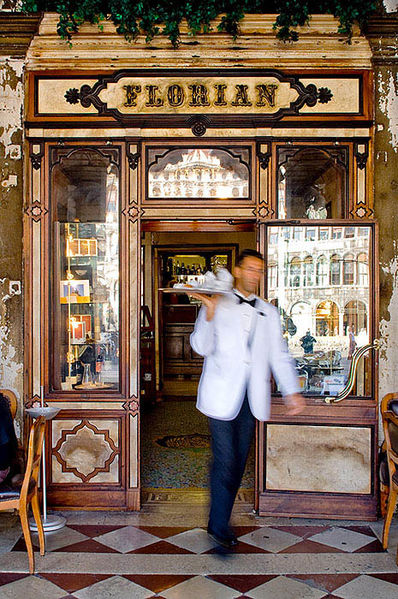 Entrance to Caffe Florian. Photo by SACRA srl CC by 4.0

And what a customer list it is: Ernest Hemingway, Lord Byron, Shelly, and Charles Chaplin. Charles Dickens and Casanova also drank coffee there, to say nothing of the current celebrities, politicians, and other well known figures who patronize the cafe. 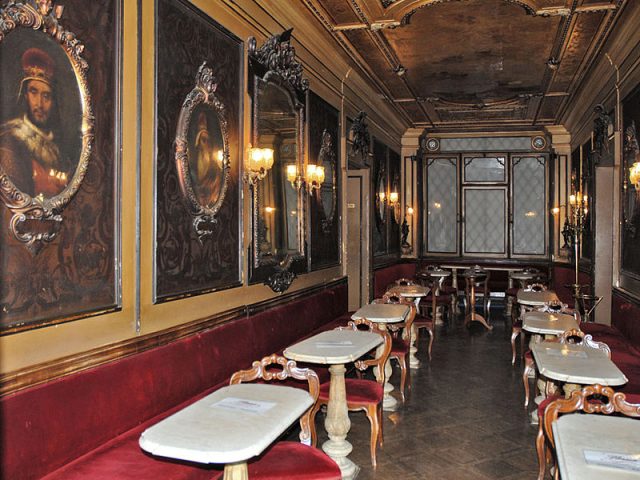 Another room inside Caffe Florian. Photo by dalbera CC by 2.0

The list of famous patrons is endless, and their visits are fun to imagine when sitting back and enjoying a cup of coffee just as they did. This is probably the oldest, still-operating cafe in the world, and people in the “lagoon city,” as Venice is known, prize it for its menu, its history, and the rich artwork that lines its walls. 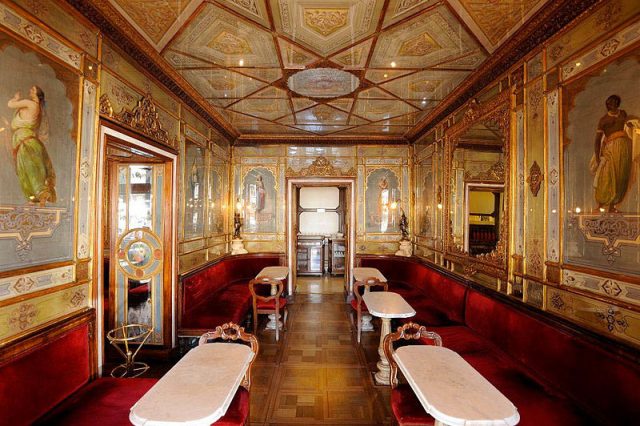 Wanted In Milan reports that Caffe Florian was founded in December, 1720, by a gentleman named Floriano Francesconi. At first, he named his establishment Alla Venezia Trionfante, but before long it the name was changed to honor the owner. It has been a vibrant cafe ever since; although it was badly damaged by the flood last year in Venice, it hasn’t shut its doors, and continues to operate in spite of difficulties that come its way. 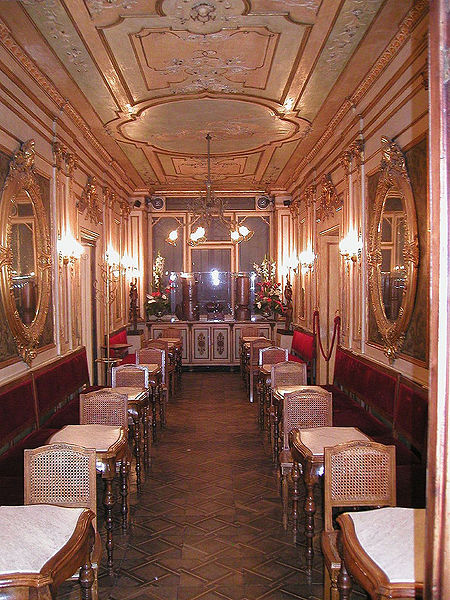 Inside the opulence of Caffe Florian. Photo by karlkp CC by 2.0 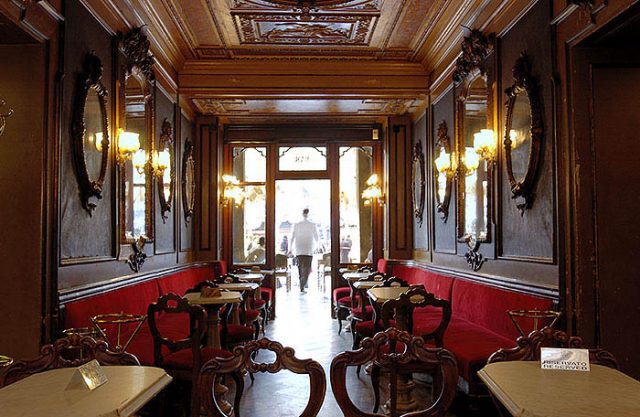 When Caffe Florian celebrated its 200th anniversary in 1920, it opened an additional room that was designed in the art nouveau style. In the winter, when tourists are no longer lined up waiting for coffee, locals go into the cafe and enjoy their coffee indoors, rather than outside at one of the many patio tables. This year, to honor its 300th anniversary, Caffe Florian has many exhibits and cultural events planned with current and historic artists of Italy. 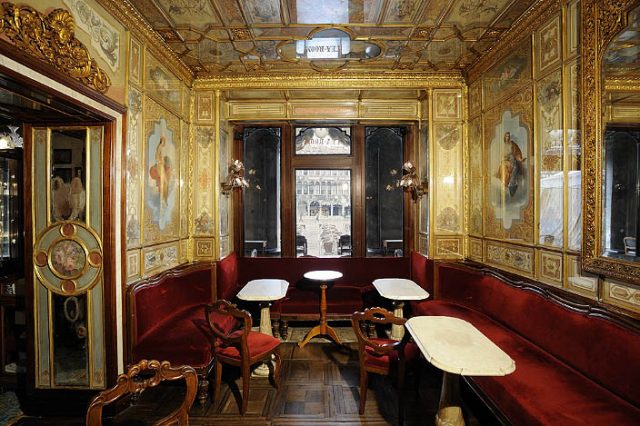 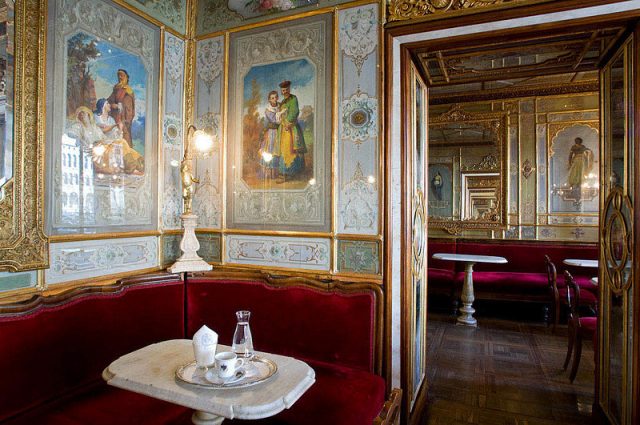 Chinese Room in the Caffe Florian. Photo by SACRA srl CC by 4.0

While it may be Italy’s oldest cafe, it is not the only one that’s been in existence for hundreds of years. Caffe Greco, in Rome, was founded just 40 years after Caffe Florian, and also enjoys a steady stream of famous and ordinary customers, every day. 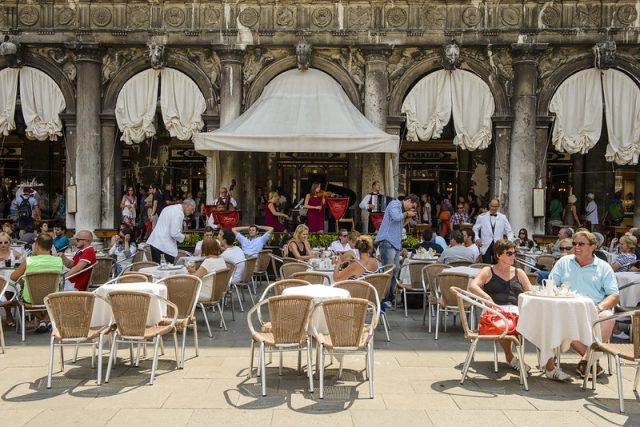 Outside Caffe Florian, the world’s oldest cafe. Photo by Son of Groucho CC by 2.0

It’s fair to say that, along with the French, no nation might know and enjoy coffee as much as Italy. They understand how to grind it, how to brew it, and how to serve it so the most vibrant, fresh flavors come to the fore. And since they often serve it with a treat, a pastry like cannelloni, the experience of taking a break in the afternoon, having a coffee, and becoming energized for the remainder of the day, may be most sublime in Venice.

Take a Look Inside the 1,200-yr-old Oldest Restaurant in the World

As it says on their website, “Every day is a special day.” Happy anniversary, Caffe Florian, the world’s oldest cafe!