Let’s face it: sharks have a P.R. problem. But now just imagine walking sharks! Ever since Steven Spielberg made “Jaws” in the early 1970s, sharks have been thought of as terrifying underwater creatures that lurk just below the surface of the water – whether that’s in the ocean or a swimming pool!

It’s an entirely unfair image, of course, but it’s one that has stuck, even though shark attacks are a relatively rare occurrence. Now imagine if they could simply walk up to a swimmer? That would truly be cause for alarm, and an even worse reputation for these fish that swim in almost every ocean on Earth.

But guess what? Some sharks do, in fact, walk in the shallows, and have been strutting their stuff for millions of years, just below the surface on the ocean floor. Marine biologists and other scientists have known this for years, apparently, but when one species was recently studied, the team examining it found, in fact, four other species of walking sharks that were previously unheard of. 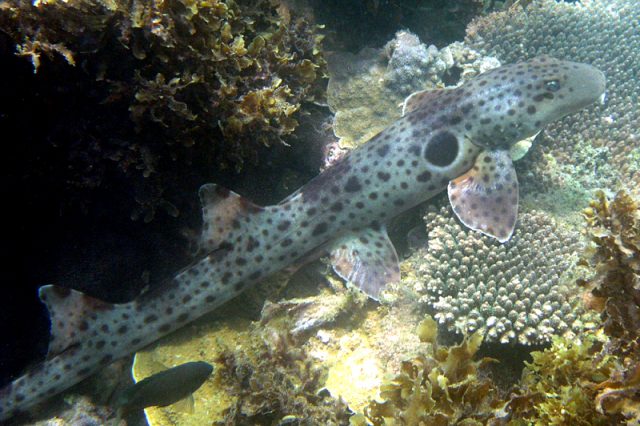 If it all sounds a little fantastic, let us explain. The walking shark, also known as the “Epaulette” shark because of its distinct, mottled spots, is not the giant, teeth-baring shark we associate with “Jaws.”

It’s a relatively small shark that lives in the shallow ocean off the coast of New Guinea. Scientists from Conservation International, specifically the Asia-Pacific Marine program, decided to study this unassuming creature to learn how it evolved. While examining this shark’s DNA, they found four, brand new species. The team’s findings have just been published in the journal Marine And Freshwater Research.

These sharks don’t actually walk the way we do, of course, but they can use their “muscular fins,” as scientists call their appendages, to scuttle along shallow ocean floors to hunt for food. Mark Erdmann, vice-president of the program and co-author of the study, recently told CNN that the research group’s finding of four more sharks is a discovery “that proves that modern sharks have remarkable evolutionary staying power and the ability to adapt to environmental changes.”

In other words, if water in a specific area recedes, the Epaulette shark relies on its fins to help it get around. Scientists said that the walking shark broke away from its traditional shark cousins, genetically speaking, about nine million years ago; they had to if they were to survive in new, more shallow locations.

Four new species of walking sharks have been discovered since 2008, bringing the total to nine https://t.co/MeMyEqoxlQ

The team also said that the most recent evolution of some sharks likely happened about two million years ago, making the just-discovered ones just youngsters in evolutionary terms. This challenges the idea that sharks have been slow to evolve, something many marine biologists have believed until now. Sharks are even older than dinosaurs — about 400 million years old.

It’s easy to be bemused by the image of this creature walking around reefs, but in fact the research team hopes their study will help with the very serious business of conservation.

Erdmann told CNN that he hopes their work might help the shark, part of a larger group known as ‘carpet sharks,’ get on the list of at-risk species published by the International Union for Conservation of Nature (IUCN), which notes dozens of fish, animals and other creatures in peril.

Erdmann added that there is “a global necessity to protect walking sharks (to) help ensure they thrive, providing benefits for marine ecosystems and to local communities,” who can promote the little creatures in tourism efforts.

It is reassuring to know that, so far, walking sharks have evolved and adapted no matter what difficulties came their way. But whether they can continue to prosper in oceans that face increasing challenges almost daily is not yet known. The difficulties faced today by almost all marine species are unprecedented — and there is a pressing need to deal with those difficulties as quickly, and as thoroughly, as we can.