The 79 AD eruption of Mt. Vesuvius was so hot, it turned a man’s brain into glass. While many people know that Mt. Vesuvius buried the city of Pompeii, it’s less well known that the damage wasn’t confined to that city alone. Other towns in the area were also at the mercy of the volcano.  One of those towns was Herculaneum. During the eruption, many of the town’s citizens tried to escape, fleeing to the waterfront. Their attempts weren’t particularly successful, and those trying to flee met the same fate as those who stayed behind.

One of the people who stayed behind was a young man of about 25, whose remains were discovered in the 1960s, lying on a bed, and covered in ash from the eruption.

According to Smithsonian Magazine, a recent study published in the New England Journal of Medicine says that bits of a shiny, black, glassy fragment found in the skull of his remains is actually part of his brain, which turned into glass because of the heat of the ash which descended on the city. 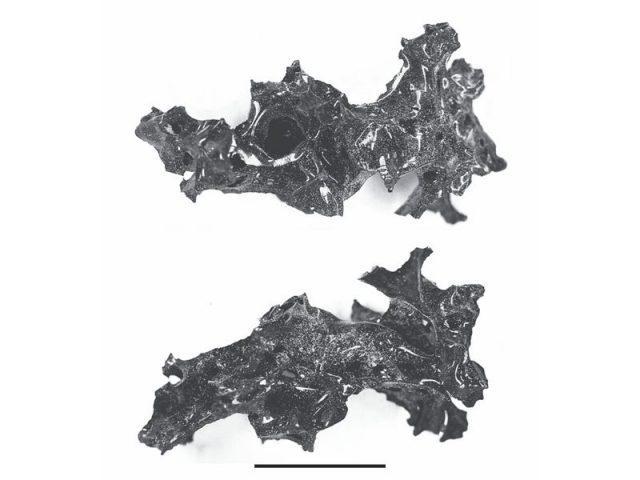 Shiny black brain fragment found within the man’s skull, which was subjected to such scorching heat that it turned into glass. (The New England Journal of Medicine)

Herculaneum lay 11 miles north of Pompeii, and was a town of some 4,000-5,000 residents. The young man whose remains were being studied opted to remain behind when Vesuvius blew, staying at the College of Augustales. The man was most likely a guard at the college, who met his end when the volcano spewed out its first clouds of super-heated ash, volcanic gas, and rocks. That mix of substances, called a pyroclastic surge, is actually what did the people of Pompeii and Herculaneum in, before the arrival of lava. 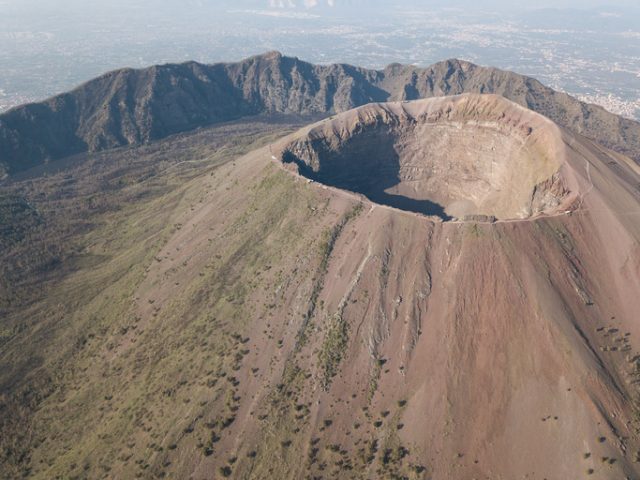 Aerial view of Mount Vesuvius, the volcano which wiped out Pompeii and Herculaneum

Recently, a forensic anthropologist from the University of Naples Federico II was studying the young man’s remains when he noticed something in the skull which caught the light. Pier Palo Petrone, the anthropologist, told some reporters that he immediately suspected that he was looking at brain tissue that had undergone vitrification, a process where organic tissue is turned into glass after being exposed to high heat. 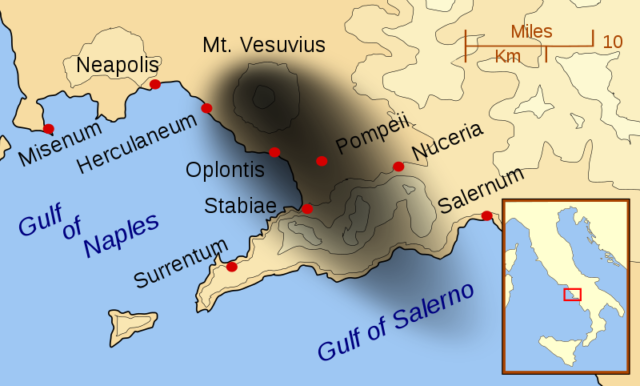 It’s not something that scientists come across very often. First of all, it’s relatively rare that any brain tissue remains in any form when dealing with remains of a sufficient age, but even when such tissue is present, it has usually transformed into smooth substance that resembles soap.

Petrone and the other researchers say that the vitrification happened when the high radiant heat associated with the superheated ash rapidly burnt off the fat and vaporized the soft tissue. That heat dissipated quickly, cooling the body. The combination of the two events is what the team believes triggered the process. 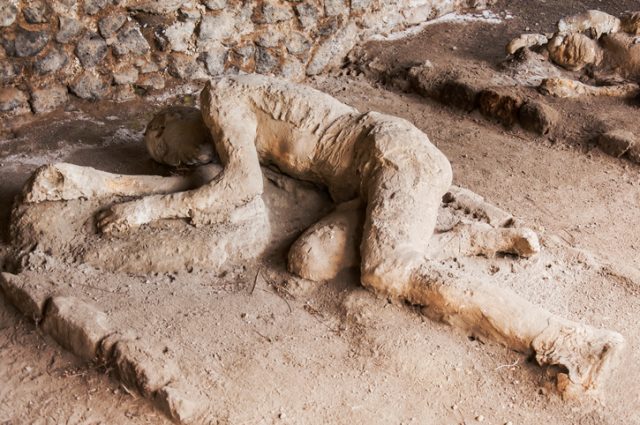 Body shapes of people after the Vesuvius eruptions, Pompeii, Italy

The notion was supported by several factors.  One is that the black glass was only found inside the skull cavity, and nowhere else on or around the remains. There was evidence at the site where the remains were found that suggested that the ambient heat of the gas cloud at the time of the eruption was close to 970 degrees Fahrenheit, confirming the high-heat portion of their theory. Finally, the glass samples were tested by a biotech center in Naples, and the test results showed that it contained proteins and fatty acids consistent with hair and brain tissue.

The report Petrone’s team produced provides clearer insight into exactly how the people in the area when Vesuvius erupted met their ends. That insight contradicts an earlier study published in Antiquity, in which it was posited that the victims first perished by the toxic gases associated with the pyroclastic surge, and then their remains were slowly ‘baked’ by the heat, which was amplified by the stone buildings they lived in.

SEE: Frozen in Time – The Citizens of Pompeii Fossilized by Volcanic Ash

In 2018, Petrone had already published research that examined and supported the idea of high heat vaporizing soft tissue, and that study also supports his most recent findings. He is currently considering trying to re-heat the glass enough to liquefy it and perhaps be able to retrieve enough usable DNA to learn more about the man it came from, and perhaps even find out if he has living descendants.