Move Over T-Rex: Newly-Identified First King of the Dinosaurs Announced

Thanks to films about the king of the dinosaurs like “Jurassic Park” and its endless sequels, the Tyrannosaurus Rex just might be the most famous, and feared, dinosaur that ever roamed the earth.  Now, however, there just may be a new contender to T-Rex’s title of undisputed king of the dinosaurs, or at least the first king until T-Rex came along.

Scientists in Utah recently reassembled bones from museums around the globe, and have discovered a brand new species, one that is related to T-Rex but lived earlier, roaming all over North America. A team that has been studying these bones have named the new species, Allosaurus Jimmadseni, for the late, Utah state paleontologist Jim Madsen, Jr. Their findings were published recently in Peer J, an online scholarly journal.

This creature, the team reports, weighed in at about 4,000 pounds, and grew to almost 30 feet in length, from the tip of its head to the tip of its tail. It stood on two, three-toed feet, had 80 serrated teeth with which to capture and shred its prey, and also had long, curved claws to help it hunt. 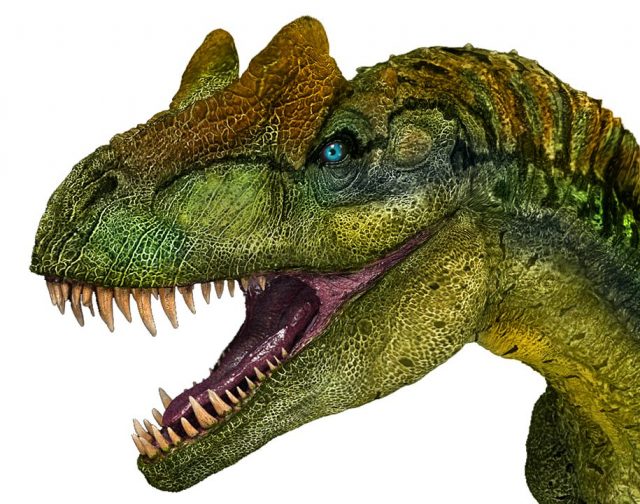 Scientists have debated for years what specimens should go into the category of Allosaurus, which refers to dinosaurs that stood on two legs, had large bodies and were carnivores. Now the A. Jimmadseni has been declared the oldest in the genus, dating back 145 million years to 200 million years, long before the T-Rex appeared. To make sure that they’d actually found a new species, the team analyzed more than 20,000 Allosaurus bones, gathered from all around the world.

This included a particularly famous one nicknamed “Big Al”, which is housed at the Museum of the Rockies in Montana. Originally identified as A. fragilis, Big Al, as well as a second Allosaurus called “Big Al Two,” have now been re-designated as A. jimmadseni, 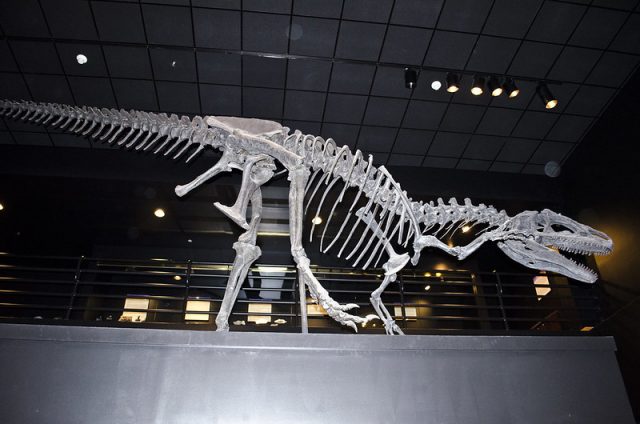 The skeleton of Big Al, originally identified as A. Fragilis but reassigned now as A. Jimmadseni. Photo by Tim Evanson CC by 2.0

“Everybody knows Allosaurus, or thinks they know Allosaurus,” says Steve Brusatte, a paleontologist at the University of Edinburgh. “But here we are, nearly 150 years after the first Allosaurus bones were found, and after dozens and dozens of skeletons have been collected, and it turns out there is another species…. There are many more dinosaurs out there to find.” 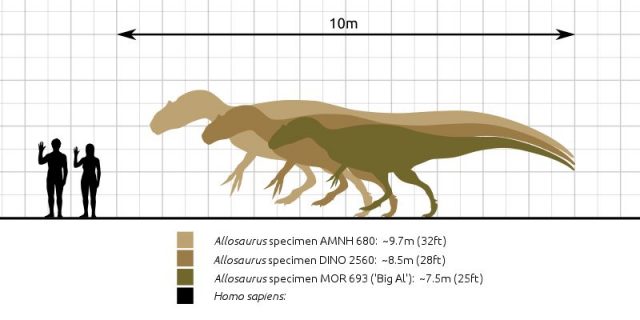 Some scientists argue that more than 10 species belong in the Allosaurus category, but for the new study, only two were recognized: Jimmadseni and one that came about five million years later, called A. Fragilis, also a predator of extreme skill. The co-authors of the study are Mark Loewen, a paleontologist with the Natural History Museum of Utah, and Daniel Chure, a paleontologist with the Dinosaur National Monument, also in Utah. Their work is the culmination of about 30 years of work on the Allosaurus genus.

A. Fragilis dinosaur. Photo by Fred Wierum CC by 4.0

The team put together the bones into two, almost complete specimens, now on display at the Natural History Museum in Utah. Loewen explained in a statement to the media that A. Jimmadseni was lost, in evolutionary terms, likely because it had a skull with weaknesses that left it vulnerable. When A. Fragilis came on the scene, it was better able to out-hunt its chief rival, and left Jimmadseni to go extinct.

“It shows that the Allosaurus changed over time,” Loewen explained in the statement. “It (Fragilis) out-competed Jimmadseni. It was a better hunter.” During their respective periods, however, both dinosaurs were excellent predators that were at the top of the food chain in their ecosystems.

Now that the Allosaurus genus has a new, formally-named member, one has to wonder why Hollywood didn’t use the right time period for its monster movie.  Is it because “Cretaceous Park” just doesn’t have the same ring to it that “Jurassic Park” has?

Who knows what goes on in the minds of movie makers, but one thing’s for sure: there’s no excuse anymore for leaving out Jimmadseni, should the franchise pick up and decide to make a new dinosaur film for a whole, new audience. Jimmadseni just might give T-Rex a run for its money as the new cinematic king of the dinosaurs.