A drought has amazingly uncovered the remains of what was once a sleepy Australian farming village. History sometimes has a strange way of revealing itself. In the Blue Mountains region in Australia, drought conditions have pulled back the curtain on a time and place long erased by flooding, done to create the Cataract Dam in New South Wales and the Warragamba Dam in the Burragorang Valley.

The dams were needed to boost Sydney’s water supply, but their creation, while a sign of progress, created some hard feelings in the communities that were eliminated. Now, those eliminated lives are coming back to the surface, in a sense. Where once water levels were high, there now exists a peek into homes, businesses and farms that were wiped out to make way for the water. 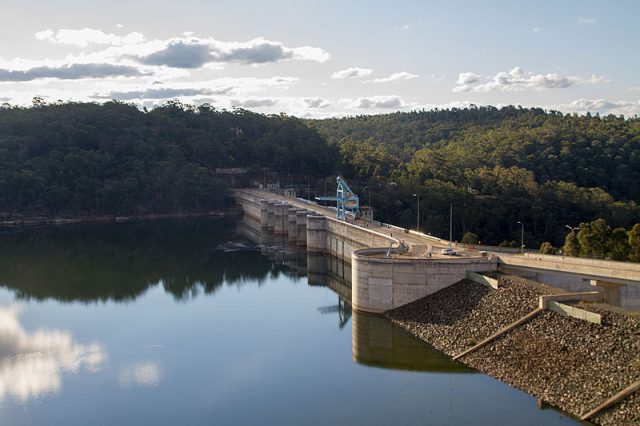 Now, however, because of an extreme lack of rain, glimpses into the region’s past offer a fascinating look at what once stood there, but also anguished reminders of just how many people lost their way of life.

Artifacts of the Australian village revealed by the drought include an old, rusty second world war-era tank, an M3Grant, and torpedo net poles leaning against dam walls. Roads, buildings and even railway tracks have surfaced again. (The torpedo nets were intended to “catch” bombs before they had a chance to explode.) 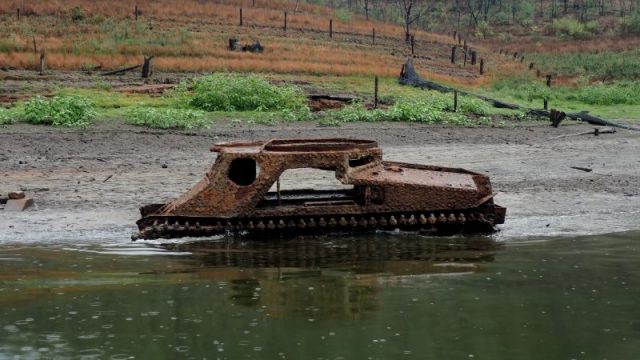 The second world war tank was most likely used by local farmers for land-clearing. (Water NSW)

But why were these items even there? “We think,” explained Kate Lenertz, heritage specialist with NSW Power, “after the end of the war there was a lot of selling off of excess army machinery, and some of the farmers did take those to use on their properties.” In her interview with news website 9news.com.au, Lenertz added, “It wasn’t uncommon for army machinery to be used for things like clearing logs or trees, but the fact (these items) reappeared from the water definitely makes this more unusual.”

Even a bridge from the past, once well below the water line, has reappeared. The Wollondilly Bridge is now fully visible because the water has receded so dramatically. 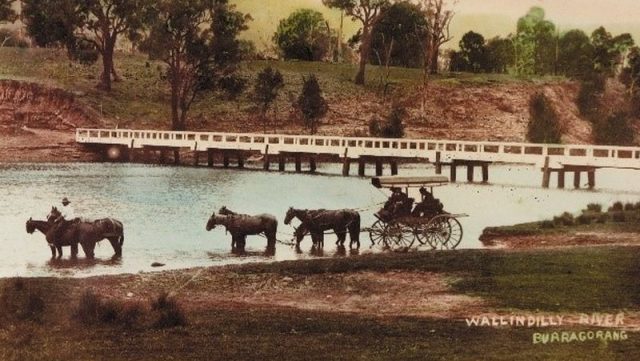 Historical image of the famous Wollondilly Bridge. Photo from 9news.com.au

If these relics offer an intriguing look at the area decades ago, they also trigger some difficult memories, Lenertz said. “It is quite emotional for those who lived in the valley at these times,” she acknowledged. Businesses, homes — in fact, entire communities — were bulldozed to make way for the dams, and the forced evacuation of so many people left some scars, Lenertz said. 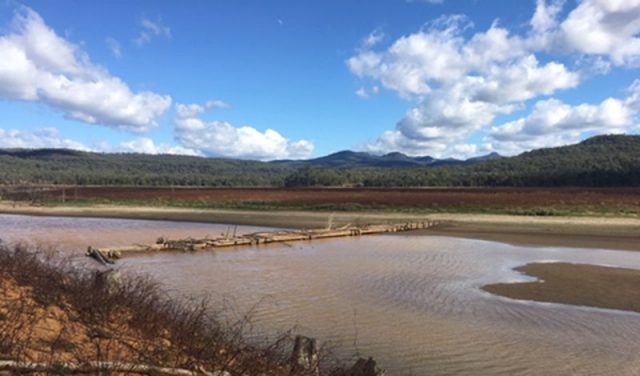 The Wollondilly Bridge can now be seen above the water. (Supplied/Alec Davie)

Consequently, there are those who would like NSW Power to get rid of the relics from the landscape, because they do provoke unwanted memories. Lenertz, however, and the company for which she works, is resisting that idea. They believe the artifacts serve as a kind of visual  storytelling tool about the region’s history, and that they have plenty to say about the present, too.

“They reflect what happened previously in the area,” Lenertz insisted. “They tell more of a story when they’re exposed by draught and we want to let them age in place.”

The relics have something to offer about current conditions too, she added. “For staff of Water NSW and perhaps for locals in the area, they are an indication of the extent of the drought,” she stated.

Although some folks have expressed concern that the rusting objects may damage the quality of the water, Lenertz said that isn’t happening, and that there is no need for alarm. The water is tested frequently, and so far it has not been impacted by the aging metals.

Building dams is no longer the immediate “go to” solution for governments seeking ways to get water and power to certain regions, largely because of their environmental impact on certain species. In a New York Times’ article of January 21st, an article pointed out that dam projects in the Brazilian rain forest scheduled for 2018 were halted, after civic protest convinced the government to re-think its permission. Countries are investigating wind and solar energy solutions as viable alternatives to hydro-electric projects, which environmental groups say are safer and less damaging.

But the Australian dams erasing the village already exist, and the drought makes manifest the inherent problems in simply wiping out towns and villages and flooding landscapes. And as water levels there continue to plunge, it is uncertain whether they will soon be restored, covering up, once again, ghostly symbols of the past.