The legendary wreck of the HMHS Britannic on the Mediterranean floor is to be opened up to diving tourists, Greek officials say. The Titanic is world famous largely because it sank on its maiden voyage in 1912. But its sister ship, the Britannic, was just as unlucky and doomed, albeit for different reasons.

The vessel was changed from an ocean liner to a naval hospital ship during the First World War, and was serving Great Britain in the Aegean Sea. In 1916, on its way to fetch wounded soldiers in the Middle East, it struck an enemy mine and sank within one hour. The Britannic has rested on the ocean floor off the coast of Greece, near the isle of Kea, ever since.  All the passengers save 30, astonishingly more than 1,000 people, were spared.

Until now, it has been protected by stringent laws that say access to ships like the Britannic is verboten, laws that make wrecks off limits to the avarice of divers who might plunder them for the antiquities aboard. Now, however, the Greek government is considering changing those rules and allowing some divers to go onto the Britannic, an effort officials say is intended to boost tourism.

HMHS Britannic as a hospital ship

Some are in favor of the change while others, predictably, are not. The new legislation, which is likely to pass as early as next month, will include other sunken, historic sites in Greek waters, including a German second world war plane and a British submarine, the HMS Pereus, which sank in 1941 when it was also hit by a mine. Until this new law came under discussion, no wreck that dates between 1860 and 1970 was allowed to be explored. 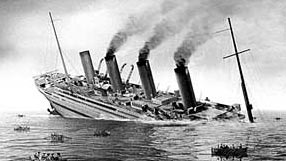 The Britannic wreck was found by the late, renowned oceanographer and researcher Jacques Cousteau in 1975. Since then, the ship has rested 300 feet below the surface, out of reach of recreational divers and salvage operations. If the new law passes, and officials say it likely will, the vessel will become part of an underwater series of attractions for tourists. And that, some Greek citizens say, can only help those who work in the tourism industry. 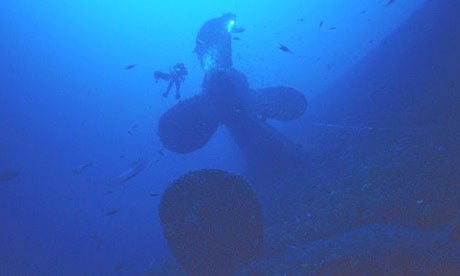 A diver swims around the propeller of HMHS Brittanic. Image provided by Simon Mills, owner of the wreck. Photograph: Antonello Paone

Yannis Tzavelakos is a professional diving instructor, and he told the New York Times recently that he hopes the legislation passes. “It is a positive development,” he stated. “Such initiatives can only facilitate innovative projects and add to the tourism industry. But,” he cautioned, “much more than good intentions are needed this time. We need to see proof that designs like these will go through.”

Because the Britannic is so deep, it is out of the reach of recreational divers just looking for an underwater adventure. Its depth means that technical divers — true professionals — will be the only ones able to explore the wreck.

And even if the laws are relaxed, a question remains about who, and how, the exploration will take place. The United States and the U.K. have an agreement about these matters that states they will decide together who to give licences to, as each country has an interest in the issue. But how will those licences be granted? That, so far, is unknown.

Unfortunately the Titanic exploration has not set a good example of how mutual operations such as these could be handled. It was accessed by a British expedition team, but the American owners of the rights to the Titanic, based in Atlanta, say the U.K.-based company had no business doing so and even that the submarine used to explore the wreck bumped into the ship. The spat is now in the courts, in Virginia.

So even if the Greek government relaxes rules regarding access to the Britannic wreck and other historic wrecks in its waters, a fundamental question remains: how will licences be given to those who want to explore them, and who will be allowed to keep the artifacts rescued from the deep waters? Will they belong to those who undertake the expedition, or the country from which the ship sailed, its true owner?

The court battle now underway in America about the Titanic will, no doubt, have a major impact on the future of the Britannic, and other treasures resting on the sea floor, out of sight but rarely out of mind.