Next time you’re sorting through your garage, be on the lookout for a Medieval sword. Sometimes, there are surprises to be found by those going through their seemingly old “junk” in storage; an old photograph, a uniform from an old job, or a priceless piece of jewelry. or even a Medieval sword, stashed away and forgotten in the garage. Sometimes children are the ones who know of these objects that have been secreted away, and sometimes, they come as a huge surprise to those who find them and realize they are indeed valuable artifacts or relics of a time past.

That is what happened recently in North Yorkshire, U.K., to a son who was clearing out the garage of his recently deceased father. He found an ancient sword, somewhat scarred and pitted but nonetheless he knew instantly he was looking at a potential treasure. He immediately took the sword to an expert, sword maker Paul Macdonald of the Macdonald Armouries, in Edinburgh, for evaluation and appraisal. 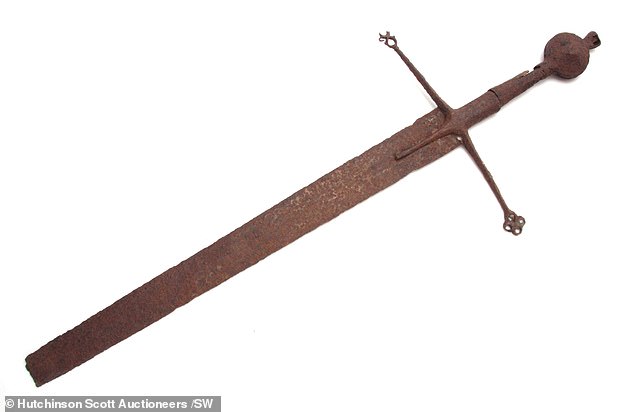 The 15th or 16th Century used by Highlander mercenaries and valued at £200 which sold for £30,000 to a Canadian buyer

Macdonald knew the sword dated back to the 15th or 16th century, and said it was used by warriors in the Scottish Highlands, known as the “gallowglass,” who were elite mercenaries who served as bodyguards to Irish chieftains. Rather than keep it, the son — who preferred to remain anonymous — decided to put it up for auction with Hutchinson Scott auction house. 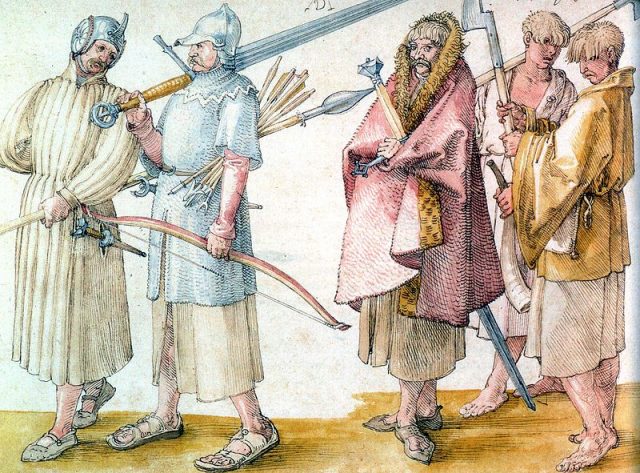 The sword was originally appraised for just a couple hundred pounds, but Macdonald, who had considered bidding on the ancient sword himself, expected it to fetch several thousand pounds. He was rightly surprised at the final bid — 30,000 pounds (almost $40,000). That was too rich for Macdonald, so the sword was sent to its new home in Canada last month, although the new owner’s name has not been made public. 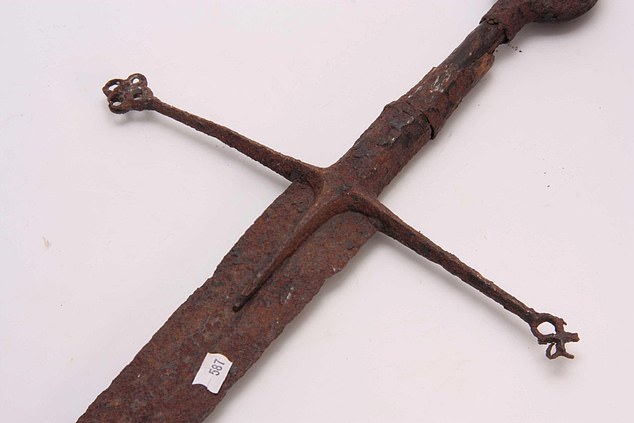 Despite its broken tip, the rusty red sword sold for £30,000 after originally being valued at £200. Photo: Hutchinson Scott Auctioneers

This sword is a rare artifact, Macdonald said, one that is usually found only in museums, or perhaps in ancestral estates of certain families.  Although it’s not in perfect condition, it is nonetheless a valuable antiquity that Macdonald hopes it treasured by its new owner. He suspects that it may have been buried, or submerged in water, or even left out and exposed to air at some point, which would explain its marred condition.

But he admits he was somewhat astonished that the sword went for such a high bid. He told website the scarboroughnews.com, “I was surprised when it went up to 6,000, then 7,000 (pounds) …but really, I am glad that it has gone for a price that reflects its true value. Clearly, its significance has been recognized and you can only hope it has gone to a good home and that it will be looked after.”

The gallowglass fighters, Macdonald explained, were hired by important Irish officials to defend them in territory and other local issues and problems. “These swords were incredibly light and incredibly fast,” he said, so it would have been the perfect weapon for bodyguards to employ. Macdonald, had his bid been successful, planned to use the sword as the basis for a replica, to turn out a modern version of this 600 year old one.

The U.K. is famous for these kinds of surprise treasures; the country is so many centuries old that often children find prized relics in the oddest places when clearing out their parents’ home. Medals from wars, old cars long since abandoned but valuable antiques nonetheless, and many other items tucked away by aging kin have been discovered all over the country.

This Medieval sword found in the garage is just one more in a long line of important finds. It’s fitting, somehow, that it made it’s way to a new home in one of Britain’s commonwealth countries, and perhaps it will one day make its way to a museum for all to enjoy.