The Boxer at Rest, or Resting Boxer is a famous statue from ancient times. Sculpted during the Hellenistic period, this seated bronze fighter is known for his rawness and battered appearance. Qualities that set him apart from the rest… whoever he is, he ain’t no marble Adonis.

More Raging Bull then Classical Greek, the Boxer is thought to have been made sometime between 323 – 31 B.C. The 140 cm high subject is tough and no nonsense, yet at the same time shrouded in historic mystery. The Met Museum – where the statue was displayed in 2013 – notes he’s “difficult to date on stylistic grounds alone, given that sculptors utilized a variety of styles in the Hellenistic period.” 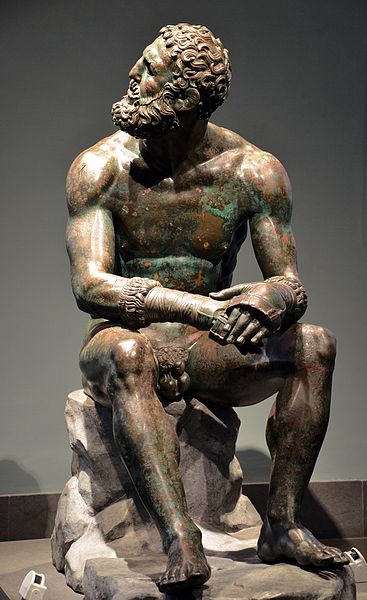 He was discovered in 1885 on Rome’s Quirinal Hill (another name for him being Boxer of Quirinal, or the Terme Boxer) and recognized as something special. Bronze was often commandeered for use as weapons or currency, making him a fortunate figure to escape a molten fate. The Boxer also had a strange charisma, albeit an inanimate one! 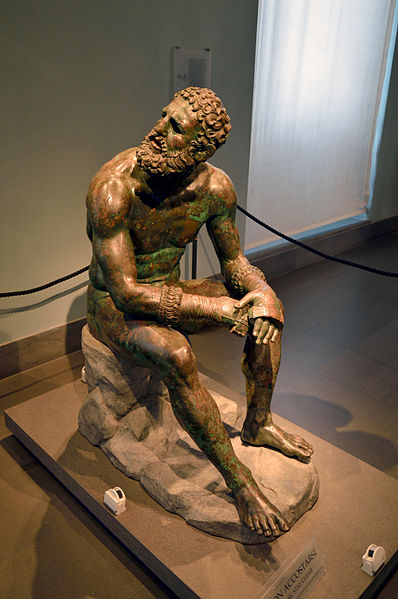 Boxer of Quirinal statue. Photo by Livioandronico2013 CC by 4.0

Archaeologist Rodolfo Lanciani, who was involved in the excavation, remarked “I have never felt such an extraordinary impression as the one created by the sight of this magnificent specimen of a semi-barbaric athlete, coming slowly out of the ground, as if awakening from a long repose after his gallant fights.” 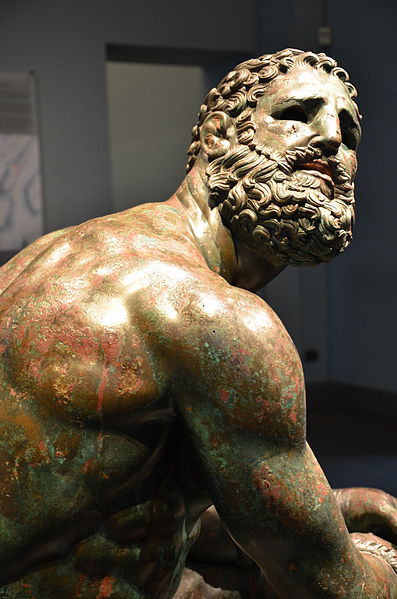 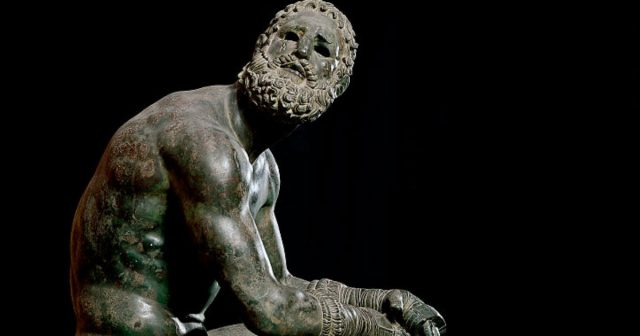 The in your face detailing on the Boxer shows these fights weren’t particularly gallant. “The rules for ancient Greek boxing were different than they are today,” writes the Met. “A boxer had to face one opponent after another, typically without significant pauses, and blows were dealt primarily to the head and face.” 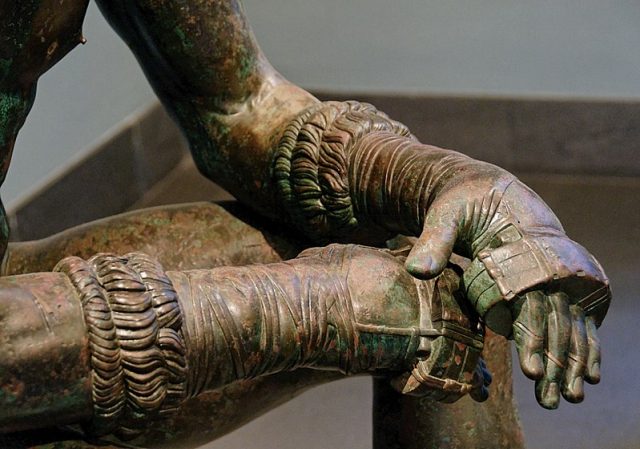 Close up the boxer’s hands. Photo by Marie-Lan Nguyen CC by 2.5

The sock-it-to-’em sport was so rigorous that the Greeks treated it as military training. His cauliflower ears may look unsightly, but became badges of honor for competitors. The statue lost its eyes a while ago, perhaps appropriately for such a dangerous character. 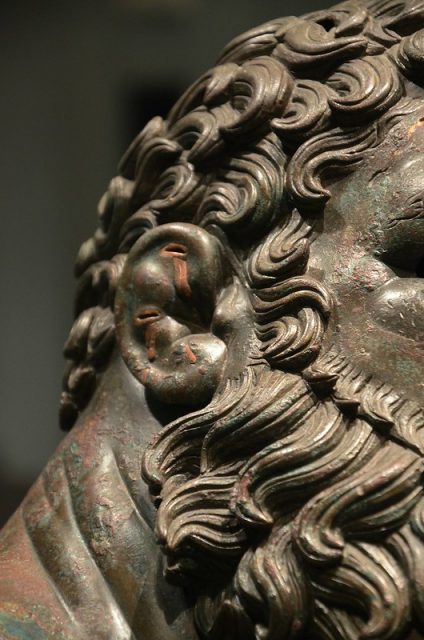 His ears appear to have boxers currently refer to as “cauliflower ear”, the result of continued blows taken to the ear. Photo by Carol Raddato CC by 2.0

The Met points out the “quick turn of his head”, which is “emphasized by drops of blood—represented by inlaid copper—that appear to have just fallen from his face onto his right thigh and arm”. And like any boxer worth his salt, he’s got a mighty bruise, “cast with a different alloy to give it a darker color.” 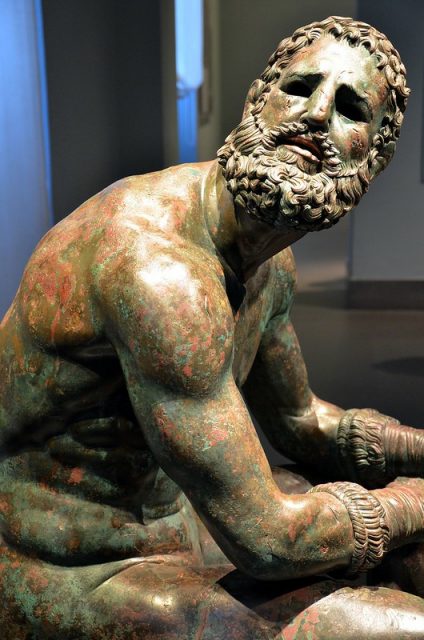 An examination of the gloves reveals they are fashioned from a sturdy ring with straps made of ox hide. He would have used these fur-trimmed items to wipe at his sweat-drenched brow. This bronzed warrior certainly makes an impression. Daily Art Magazine describes how “his sad, magnetic presence and powerful physicality fill the room…his palpable exhaustion and vivid musculature engulf you in his realism.”

Realism is a key word, for the Hellenistic period saw statues as vibrant and almost alive in their design. The Boxer at Rest would have been put together using a process called hollow lost-wax casting, specifically the indirect method. Lost-wax casting creates a metal duplicate from an original model, typically made of wax. The fighter would have been made in pieces that were then welded together.

As for who made him and his overall meaning, that’s a matter for the ages. In a production for the Eni Video Channel, writer Gay Talese observed, “This magnificent and ancient statue… is a representation of Mankind’s long lasting concern with fear.” Fear of defeat in the ring, in front of a crowd who would witness every second of the visceral humiliation. Some think he’s a simple boxer. Others that he carries greater significance. The Boxer is believed in some quarters to be a depiction of Herakles, the Greco-Roman hero.

“Parts of the toes and fingers of the Boxer at Rest are worn from frequent touching in antiquity,” notes the Met.” It has been suggested that the statue was attributed healing powers, as was known to have occurred with other statues of famous athletes.”

He may be sitting down, however the Boxer at Rest statue has been packing a punch for centuries. His name may be a mystery, but his powerful legacy will surely stay the test of time.