Philosopher Jeremy Bentham’s skeleton has been put on display at University College London (UCL). But there’s a difference! Instead of bones, students will be seeing a whole lot more of the historic philosopher.

His body is suited and booted, with a wax head to complete the appearance. The case containing him is “specially crafted to protect the icon from ultraviolet light, dust, pollutants and bugs” according to Smithsonian.com. UCL say on their website that Bentham is “showcased and preserved to museum standard” and available to view at the new Student Centre between 7am and 7pm daily.

The move is part of a 10 year program called Transforming UCL. This permanent feature pays respectful tribute to a man who contributed so much to the institution. If it wasn’t for Bentham, the place wouldn’t have been established at all. The founders of UCL were students of utilitarianism, a collection of theories promoting happiness and well being. 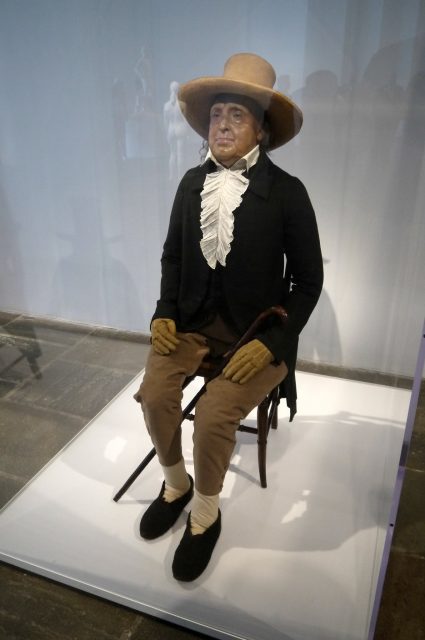 The “auto icon” of Jeremy Benthem on display at UCL. Photo by Eden, Janine and Jim CC by 2.0

Vice-Provost (or Head) of Education & Student Affairs Prof. Anthony Smith comments, “What better way to honour Bentham’s legacy and from where he will continue to remind us all of UCL’s values which remain as true today as they did in 1826”. That was the year UCL was founded, under the name London University.

Bentham was also an atheist, donating his body to medical science. However he didn’t just want to be simply boxed away. Instead he wanted to become a living memorial called an “auto-icon”.

While seating him in a glass box at the Student Centre is seen as in line with his wishes, Bentham’s original intentions were more ambitious. He lived between 1748 and 1832 and made various arrangements for his demise. Bentham even “requested that his auto-icon be brought along to meetings and social gatherings he would have enjoyed in life” writes Smithsonian.com. His skeleton is “padded out with hay” for an altogether healthier look.

Bentham’s remains initially stayed with surgeon Thomas Southwood-Smith. London School of Economics philosopher Michael Otsuka has highlighted Bentham’s will on Twitter. It states, “My body I give to my dear friend Dr Southwood-Smith to be disposed of in a manner hereinafter mentioned, and I direct (that) he will take my body under his charge… in the manner expressed in the paper annexed to this my Will and at the top of which I have written Auto Icon.” 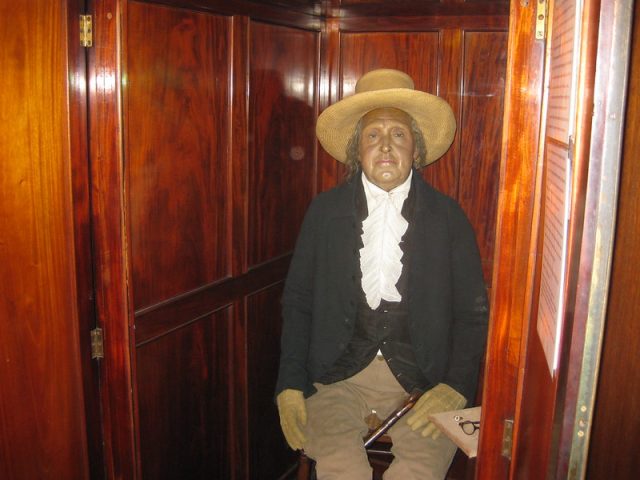 Bentham also called for “an appropriate box or case” and an affixed plate “to be engraved in conspicuous characters”. Otsuka has posted the information following accusations this new display is “undignified” and goes against Bentham’s thinking. He also brings up questions over whether the influential figure would have wanted to be a public spectacle in the first place. 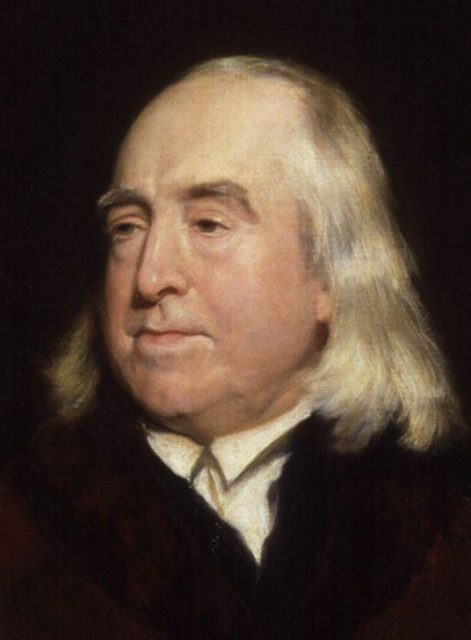 Jeremy Benthem. The philosopher whose skeleton is on display.

Researcher Tim Causer of Project Bentham, speaking to Atlas Obscura, refers critics to Bentham’s Book of Fallacies. “Bentham discussed what he called the ‘Ancestor-Worshippers’ Fallacy,” Causer says, “that is, the argument that since something had always been done one way, it should always be done that way.” Would the writer be offended at his current location? No, Causer believes. “Bentham spent most of his life, after all, taking that attitude to task in trying to reform the British establishment.”

Southwood-Smith accommodated the deceased philosopher for two decades before he was transported to UCL in 1850. This was because the Doctor had moved and didn’t have room for the ultimate Utilitarian. Bentham’s original display was somewhat more ghoulish, with his actual embalmed head sitting under the chair where his stuffed body and wax head sat. The new version is family friendly.

SEE MORE: The Incredibly Realistic Face of Queen Elizabeth I

Despite radical ideas about memorials, Bentham also showed a conventional side. “In 1822—ten years before his actual passing—he commissioned a silhouette for use in 26 memorial rings,” writes Smithsonian.com. These were intended for his family and friends to remember him by. His 21st century descendants can now get up close and personal with the man himself, thanks to this latest chapter in the Bentham story.