Jurassic Park eat  your heart out. The smallest dinosaur on record has been found stuck in amber. When we think about dinosaurs, the creatures we picture are usually quite large, such as the Apatosaurus or the T-Rex. We know others are smaller, such as Velociraptors, but even those were around 180 pounds. Some dinosaurs were a lot smaller than that, a fact which recently demonstrated when scientists recently reported finding the smallest dinosaur ever discovered, trapped in a chunk of amber, according to the BBC. The scientists published their findings in the journal Nature.

The fossil was found in northern Myanmar, in a piece of amber that is approximately 99 million years old. It is the skull of a dinosaur that resembled a bird, and its size suggests that the entire creature would only have been about as large as a bee hummingbird, the smallest bird currently living.

Even other small dinosaurs, such as the Microraptor, were still a couple of feet in size and could weigh between two and three pounds. This new find, however could have only weighed a couple of grams. Its diminutive size may help researchers gain some insight about how small birds evolved from larger dinosaurs. According to Jingmai O’Connor from the Chinese Academy of Sciences, there are problems that are very particular to creatures of that size, including staying warm and how to fit all the necessary sensory organs into such a small head. 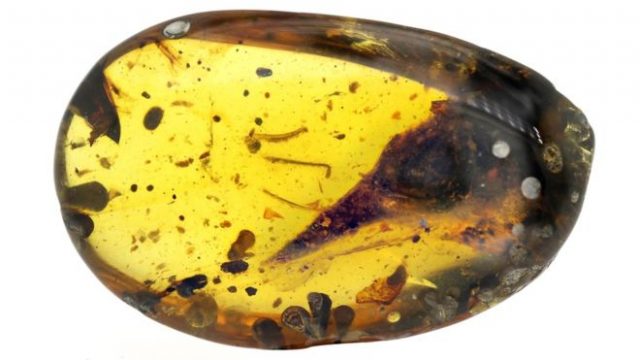 The tiny dinosaur caught in amber. Photo by Lida Xing.

Most birds have a ring of bones that supports the eye. Usually the bones that make up that ring are square and pretty straightforward. This new find, which has been named Ocludentavis khaungeae, has a similar ring, but instead of being square, the bones are spoon-shaped. The only animal currently known to share that type of characteristic are certain types of lizards. The bones of the eye would have been cone shaped, which means the little creatures would have had very good eyesight. 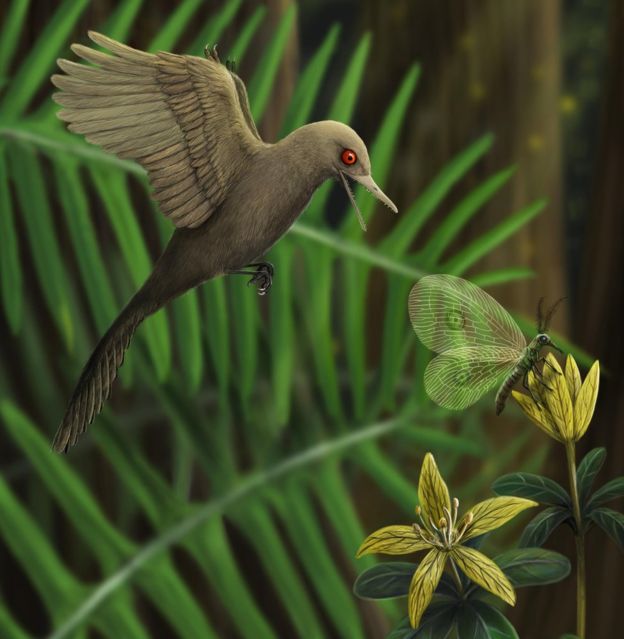 Artwork of the tiny bird dinosaur by HAN ZHIXIN

Owls also have the same sort of cone shape, but their eyes face forward, whereas the eyes of O khaungeae seem to have faced sideways. The tip of the cones would have been narrow, as well, restricting the amount of light that could enter the eye, which means that this was a creature that was active during the day. Finally, it appears that its eyes would have bulged outward in a way that no modern living creatures does.

Professor O’Connor called it the weirdest fossil she’s ever seen, but feels lucky to be able to study it. Unfortunately, since the fossil is only the skull, there is only limited information that can be gathered from it about who its body looked and functioned. Some features of the fossil resembled those of dinosaurs, others resemble those of birds.

At present, researchers don’t know if the collection of features they’re observing is an adaptation because of the creature’s small size, or it they are a product of its lifestyle. The fossil’s jaw had a lot of teeth – more than 100 –, which strongly suggests that it was a predator, probably feeding on insects. Its eyes were placed on the sides of its head, however, meaning that it doesn’t have the sort of binocular vision that scientists associate with predator species of all types.

The specimen even still contains some of its soft tissue, preserved in the amber that surrounds it, which is common for specimens that are found in amber, since the resin surrounds and preserves the creatures at the moment of their death, protecting them from decay. In the case of such small animals, their bodies are so fragile that there aren’t many examples in the fossil record.

Dr. Luis Chiappe, O’Connor’s co-author for their recently published study about the little dinosaur, remarked that the find was exciting because it gave them an opportunity to learn more about small animals that would have lived in a tropical rainforest during the time of the dinosaurs. O’Connor called the find ‘the discovery of a new ecological niche we never even knew existed.’