American castles you say? These lavish castles look like they could be found in the British Isles or Europe but are actually homegrown in the USA! They say an Englishman’s home is his castle. Well it seems that applies to Americans too.

Smithsonian Castle in Washington D.C. is a fine example. Designed by 19th century architect James Renwick Jr. it takes its visual cues from the 12th. Built with red sandstone and completed in 1855, the structure’s real name is the Smithsonian Institution Building. However, Castle is equally appropriate.

This location forms the administrative heart of the Smithsonian and its vast knowledge bank. So it makes sense that Smithsonian Magazine have now explored similar places. Castles that appear ancient, yet are relatively recent. The results were fascinating…

Castles are typically connected to the age of Kings and warfare. Bannerman Castle in New York is an early 20th century structure, but has some things in common with fortresses of the past. For starters it’s in a great position, namely Pollepol Island on the Hudson River. 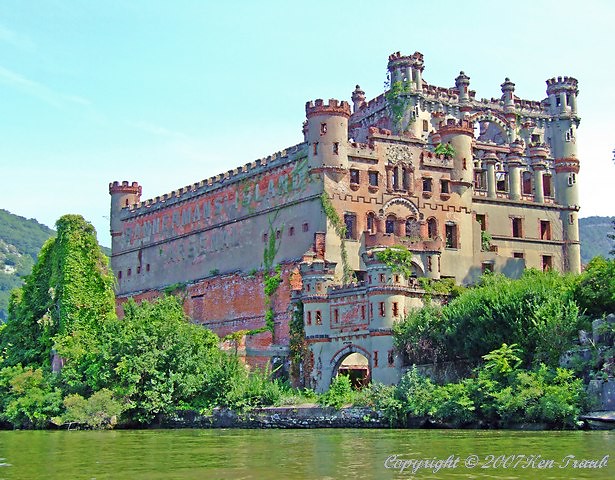 It wound up situated there thanks to a man and a canoe. That man was Francis Bannerman VI, an Irish munitions dealer who spotted the location in 1900 while out for a paddle on the Hudson. Smithsonian Magazine writes that “the island’s seclusion and distance from the city made it an appealing location for a storage facility to house cannons, boxes of gun powder, uniforms, scrap metal and other military paraphernalia.”

In a way Bannerman Castle was as tough to build as any military campaign. By 1918 its creator had died and the work stood unfinished. A dramatic explosion 2 years later wiped the powder house off the map. Modern weather conditions took care of most of the rest…

The old castles used to play host to family dynasties, and this tradition continues with the Biltmore Estate in Asheville, North Carolina. It’s the Vanderbilt family home, the vision of George Washington Vanderbilt III. Designed by Richard Morris Hunt, the lavish gardens were created by NY Central Park’s Frederick Law Olmstead. The structure, a chateau containing 250 rooms, was informed by the French Renaissance. 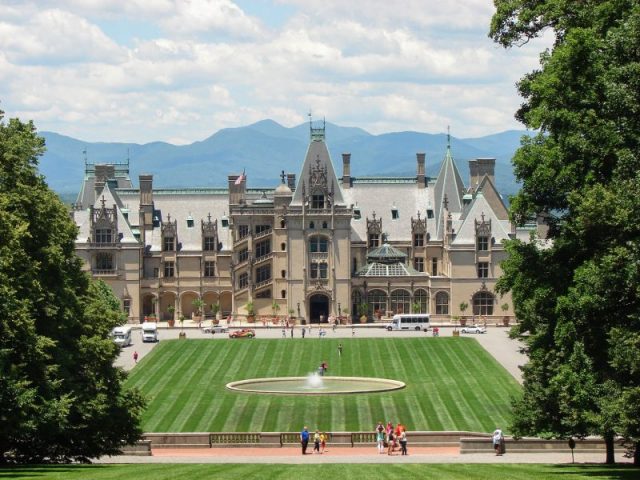 Billed as America’s biggest privately owned home, the Biltmore Estate website describes “a true marvel, the largest undertaking in residential architecture.” The project took 6 years to realize and used the services of “an entire community of craftsmen”.

The present owner is Bill Cecil Jr, CEO and President of the Biltmore Company. He’s the son of William Amherst Vanderbilt Cecil, who developed the ‘castle’ as an attraction and who passed away in 2017. The estate “offers a more authentic and inspiring view of Gilded Age life”. However it’s currently hosting a Downton Abbey exhibition, for added English flavor…

This fantastical structure in Rye, Colorado looks like something out of a Disney storybook. Its beginnings were actually quite humble. In the late Sixties a young Jim Bishop decided he wanted to build a hideaway out in the forest. “With the help of his father, Willard, the pair gathered nearby rocks” writes Smithsonian, “and, without using a single blueprint, set out to create a stone cottage of epic proportions.” 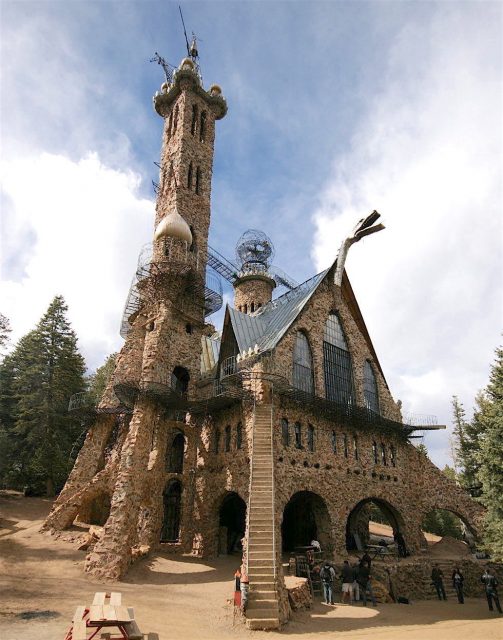 Epic proportions was right – by the mid-Nineties Bishop found himself with a 165 ft high castle with a turret, grand ballroom and dragon. Yes indeed, he even saw fit to install a fire breathing monster. Albeit one made out of stainless-steel! His plans leaned in this adventurous direction after family and friends commented on the castle-like scale of his project.

One of the best things about Bishop Castle is the free entry. Anyone can arrive from whatever far flung kingdom to admire the Bishop family’s handiwork and be part of a unique American fairy tale…

The name William Randolph Hearst is sometimes linked to Citizen Kane. Orson Welles’ fictional media titan built a huge home for himself he called Xanadu. Turns out Hearst wasn’t far off the mark in that department also. 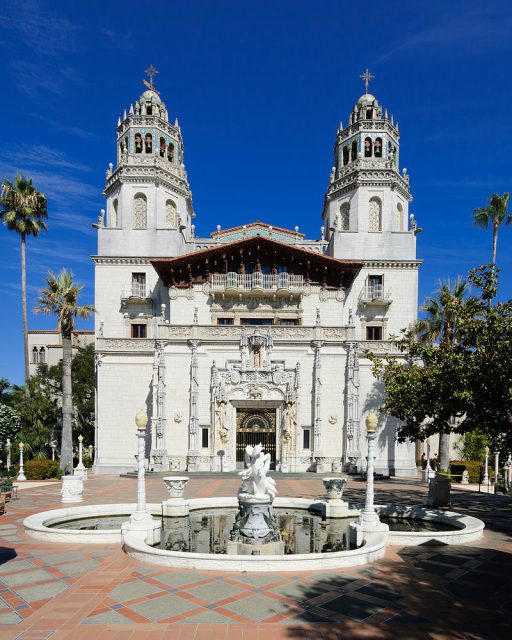 Hearst Castle – or to use its Spanish handle La Cuesta Encantada (“Enchanted Hill”) – is in San Simeon, California. Working with the architect Julia Morgan, Hearst began construction in 1919. As Smithsonian notes, the castle “began as a ‘modest dwelling’ but eventually grew to a multi-million-dollar project that included multiple buildings”. 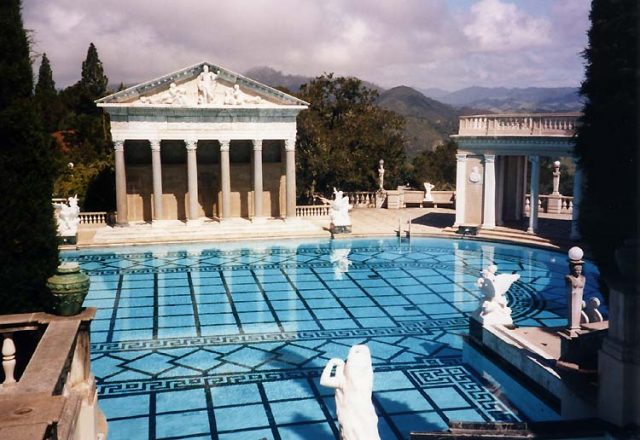 he Neptune Pool at Hearst Castle was rebuilt three times to suit its owner’s tastes. Its centerpiece is the façade of an ancient Roman temple Hearst imported to California. Photo by Stan Shebs CC BY SA 3.0

It was an ambitious project. Perhaps too ambitious. Hearst was forced to leave in 1947 as he became too ill to remain. Hearst Castle’s website explains, “the estate was still unfinished even though it comprised 165 rooms and 123 acres of gardens, terraces, pools and walkways—all built to Hearst’s specifications and showcasing a legendary art collection.”

The man who co-created this elaborate fantasy passed away in 1951. But his dream lives on as a museum and tourist attraction.

Arguably the most exotic of the American castles can be found all the way out on Hawaii. Iolani Palace pre-dates the island becoming part of the United States, built in 1845 on ancient land. It was the home of King Kalakaua – who reigned between 1874 and 1891 – and sister Lili’uokalani, who became Queen afterwards. 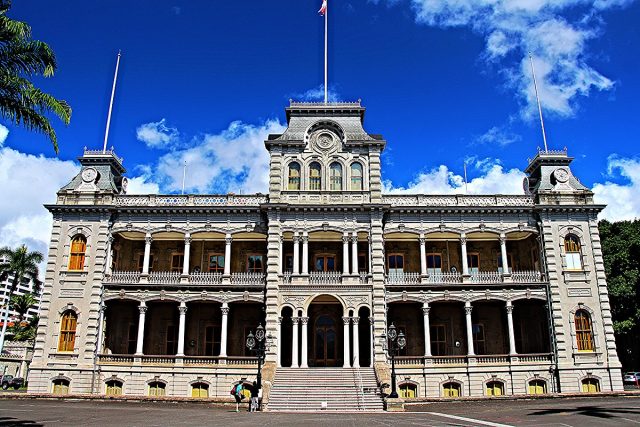 Lili’uokalani was the last sovereign monarch of the Hawaiian Kingdom. She was overthrown in 1893 during a dramatic period which resulted in Hawaii becoming the 50th state.

Smithsonian writes that the distinctive structure blends “the square symmetric style of Italian Renaissance architecture popular in Italy with Hawaiian touches, including the incorporation of local koa wood in the construction.” It was also a modern environment despite the historical inspiration. “Iolani Palace was ahead of its time as it was outfitted with… electric lights, indoor plumbing and a modern communications system – the telephone.”

Related Article: Travel Back in Time to These Charming Historic Villages Near London

What better note on which to end this look at classic American castles with a modern twist?