Travel Back in Time to These Charming Historic Villages Near London

A throbbing metropolis is all well and good but there’s nothing quite like historic villages frozen in time. There’s much more to a country than its urban centers, as England proves. Its rich history is often found away from the likes of London and out in the lush countryside. Some villages make it seem like the past couple of centuries never happened!

What’s easily overlooked is that many picturesque villages are within easy reach of the capital. Step back in time with these idyllic places to hang one’s hat…

The Wiltshire village of Castle Combe is a historic hideaway. It famously hasn’t had any new houses built since the 17th century. The unmistakeable Market Cross dates back to medieval times and is close to the local church. Inside the church lies the community’s faceless clock, believed to have been made in the 15th century. If visitors don’t see it, they certainly hear the bell it strikes. 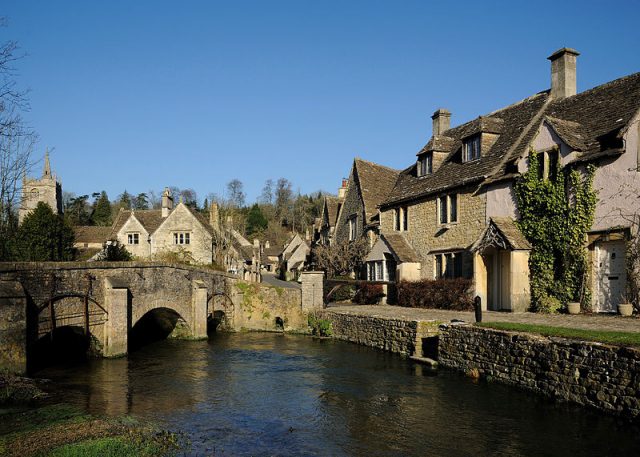 Castle Combe in Wiltshire, England, with a population of around 350. The village was the setting for the movie “The War Horse” and also the original version of Doctor Doolittle with Rex Harrison. Photo by Saffron Blaze CC by 3.0

Provisions can be found in honesty boxes, where people take what they need and pay what they want. Movie buffs might want to know one village property was used for the 1967 movie of Doctor Doolittle. And a more modern world isn’t too far away thanks to the Castle Combe Race Circuit. 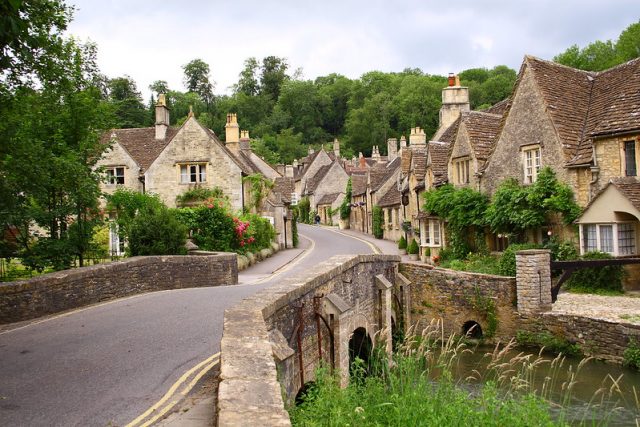 Looking up Water Street from the Brook – Castle Combe, England. Photo by John Menard CC by 2.0

According to Time Out, a bridge at the southern tip is the best place for a photo, writing “It’s where Castle Combe’s combo of weavers’ cottages, rippling river and wraparound woodland come together in one picture-perfect vista – especially if you can get the church spire in.”

Also in Wiltshire, Lacock is a place where residents are happy to let time stand still. Or at least as still as possible. Until the 19th century it made its money from wool, and when that unraveled (!) the modern world was accommodated a little. That being said, Lacock appears to be frozen in time from 200 years ago. 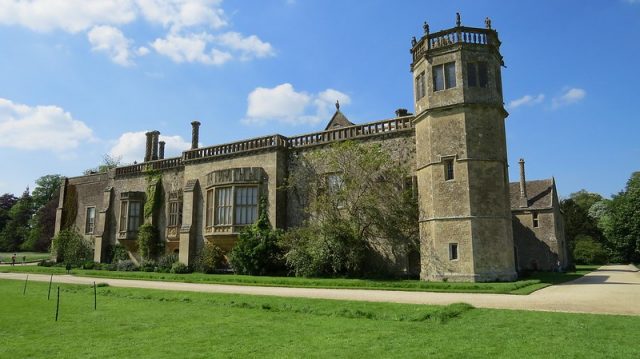 The area is looked after by the National Trust and boasts impressive, untouched features. The abbey was built in the 13th century and the village has a 4 street medieval grid system of houses. There’s also an old workhouse and medieval tithe barn. Tithes were earnings deducted by the Church. 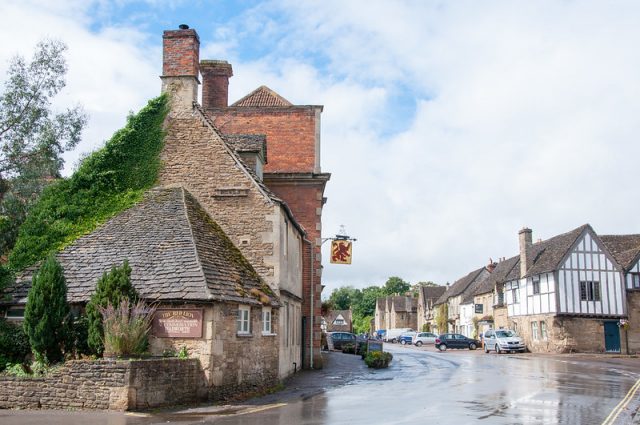 Also of note is the old shop on High Street, the window of which is like a time portal. “It remained in the same family until it closed in the early 1980’s. Miss Butler, the last resident, arranged the shop window in the style of early twentieth century displays and it has been untouched ever since” the National Trust writes. There are even cobwebs on the bottles!

Lacock is a filmmaker’s dream. The abbey featured in Harry Potter. Meanwhile, Downton Abbey and the BBC’s Pride and Prejudice took maximum advantage of those scenic views.

Another of the great historic villages of Shaftesbury in Dorset was frequently depicted on the page, care of author Thomas Hardy. Small and perfectly-formed, it is a Victorian paradise on a hilltop with more than a few ups and downs. For example, tourists will need their walking shoes to go up Gold Hill, passing between historic houses as they go. 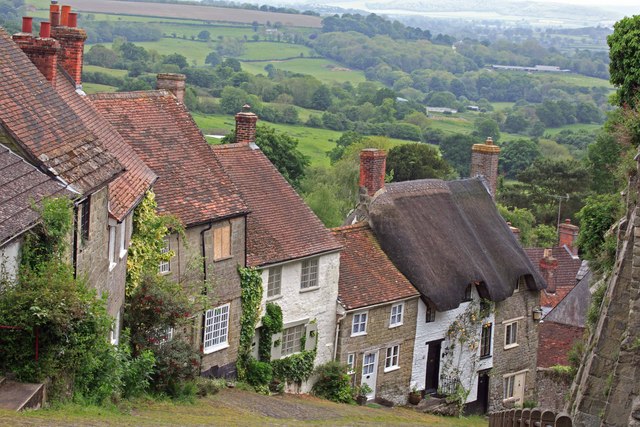 Shaftesbury’s tourism website mentions its fictional name of Shaston. Referring to Hardy’s Tess Of The d’Urbervilles, it writes “Shaston is one of the boundaries of her world, seen from her home in Marlott (Marnhull) ‘standing majestically on its height.’ Hardy was fascinated by Shaftesbury, calling it ‘the city of a dream’ because of its history and ‘one of the queerest and quaintest spots in England … breezy and whimsical’.”

Despite appearing sleepy, Shaftesbury has seen its fair share of drama away from literature. Cnut the Great – King of England, Denmark and Norway – reportedly died there in 1035.

Over in the county of Surrey is Shere. Found between 2 towns – Guildford and Dorking – and close to the mighty M25 motorway, it nevertheless has a secluded and idyllic reputation. Shere and 12th century holy spot the Church of St James is namechecked in the Domesday Book of 1086. 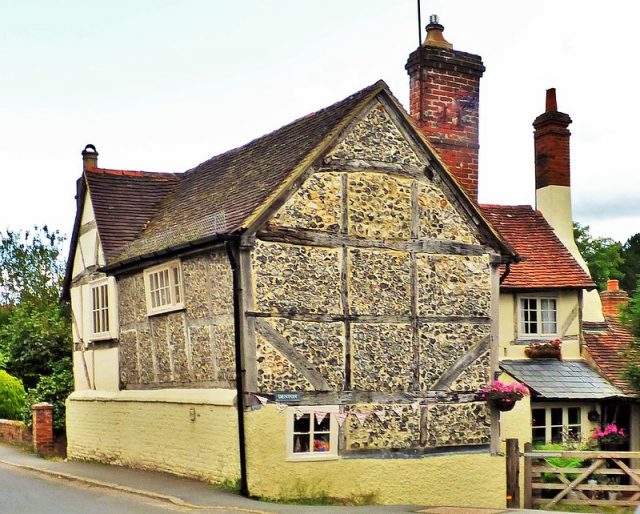 The Visit Surrey sites writes that the Church “contains a tiny enclosed cell in which Christine Carpenter, an anchoress (religious recluse) lived. Her only contact with the outside world was through a grid and an aperture through which food was passed.” She was known as the Anchoress of Shere. 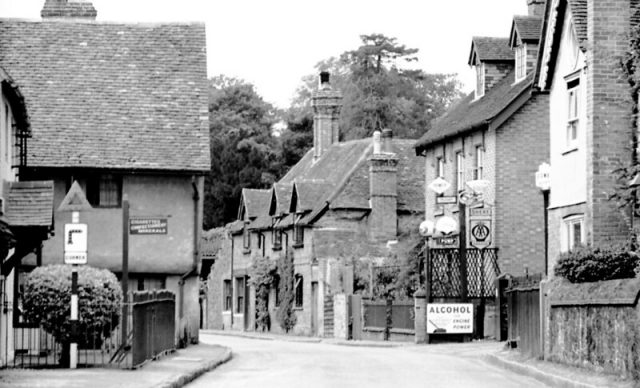 For what’s described as one of the “quintessential historic English villages”, it also has a pedigree for English characters. Bridget Jones flick The Edge of Reason lined its lenses there. And festive romantic classic The Holiday also filmed in Shere.

The beautiful county Suffolk plays host to this unique location by the sea. While it looks like a slice of history, it’s actually a more recent construction. In fact it was the brainchild of one man – barrister Glencairn Stuart Ogilvie. During the 1920s he wanted to create a private retreat for himself and his nearest and dearest. 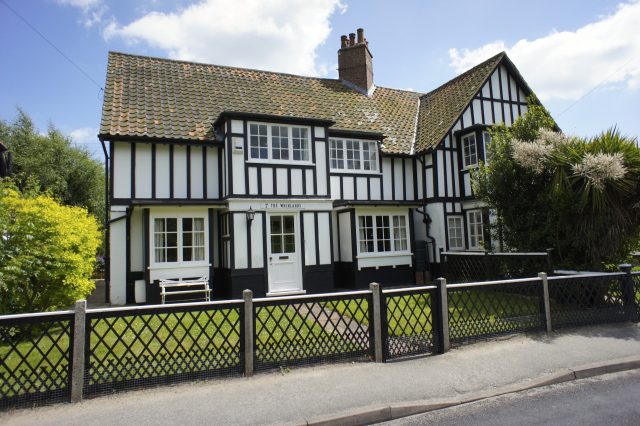 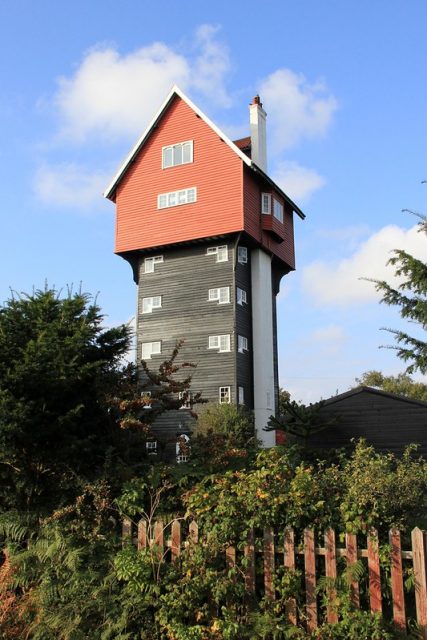 The House in the Clouds. A water tower in Thorpeness. Built in 1923 to receive water pumped from Thorpeness Windmill and designed to improve the looks of the water tower, disguising the tank with the facade of a weatherboarded building more in tune with the mock-Tudor and Jacobean style of Thorpeness. Photo by Karen Roe CC by 2.0

Now everyone can take a gander at the place, which used to be a 19th century fishing hamlet before Ogilvie set his sights on the area. Generally it remains a quiet location, with an off-peak populace of around 400. Like the Italian-inspired village of Portmeirion in North Wales (used for shooting ‘60s TV series The Prisoner), it has caught the public’s imagination.

It received the dubious honor of Weirdest Village in England from Bizarre Magazine in 2003. Time Out writes, “Swing by to find mock-Tudor and Jacobean-style cottages, a medieval-looking gatehouse and a surreal water tower-turned-holiday home – all set around an artificial lake.” The historic mish-mash of these villages certainly lingers long in the memory…