Have you ever wanted to go back in time and see the wonders of ancient Athens?  If so, you’re not alone, and one man, Dimitris Tsalkanis, has made it possible.

Tsalkanis is a native of modern Athens and works as a photographer-illustrator.  For the last 13 years he has been recreating ancient Athens through the use of 3-D modeling software and his work can be seen in its entirety at his website Ancient Athens 3D, according to a recent article in Smithsonian magazine.

The final product is called Ancient Athens 3D, and offers views of the city from seven different periods in its history, ranging from the Mycenaen era, beginning around 1,600 BC, through the Ottoman period, which goes from 1458-1833, and allows viewers to take an individual look at how the city’s various, well-known landmarks would have looked during each of those periods of time. 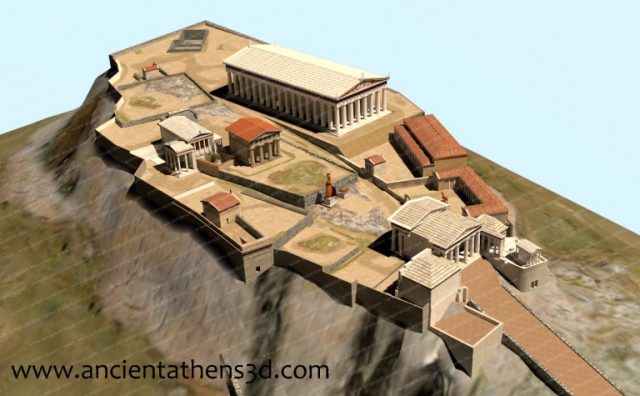 The Acropolis during Athens’ Classical period. 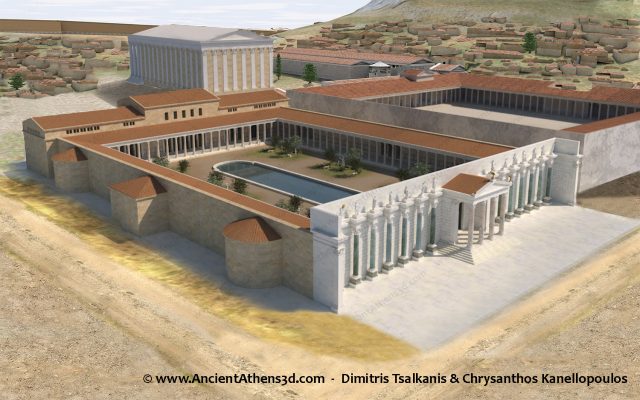 The Library of Hadrian during Athens’ Roman period. 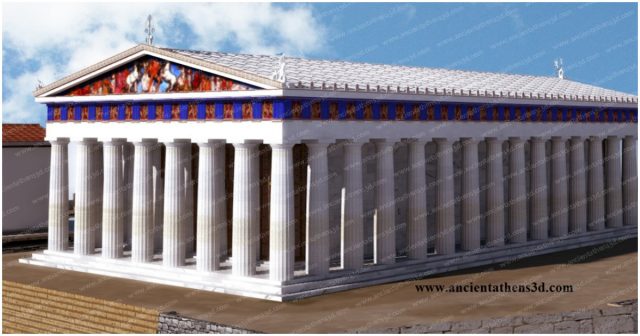 The parthenon in its classical period.

The site launched in 2008, and in preparing it, Tsalkanis let his work be guided by the changes in architecture that typified these eras, which are similar to, but not identical to, those periods which have been outlined in history books.  Clicking on any of the seven era will not only give 3-D renderings of the city during that period, but will also provide some discussion about the city’s history during that period. 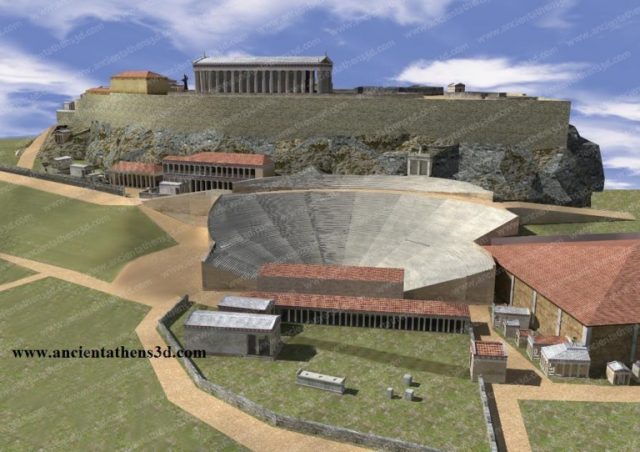 The Acropolis’ south slope. The huge square building on the right is the odeum of Pericles. In the middle stands the sanctuary and the Theatre of Dionysus. Next to it, are the stoas of the Asclepieion. 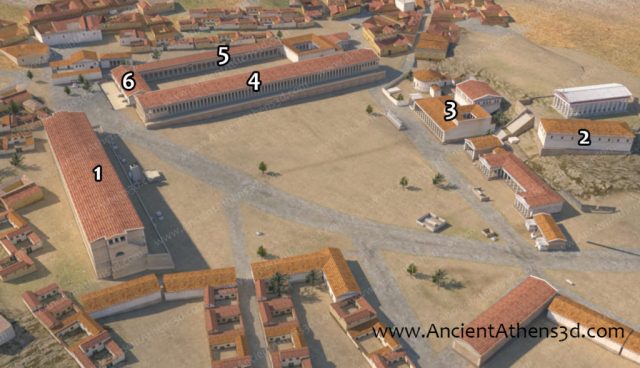 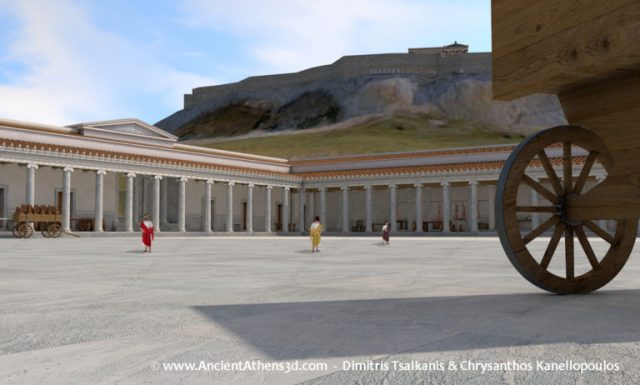 The south west corner of the compound seen from the north; in the background is the Acropolis.

Despite the fact that site has been active for a dozen years, it’s regularly updated to reflect any new information that archaeologists uncover, so that it stays as faithful a recreation as possible. On the site’s home page, he is very up front about the work not being absolutely, 100% accurate.  There are factors which make that impossible, ranging from some simplifications which are the result of technical limitations to the sheer difficulty of knowing whether or not all the details of such old monuments are entirely accurate. 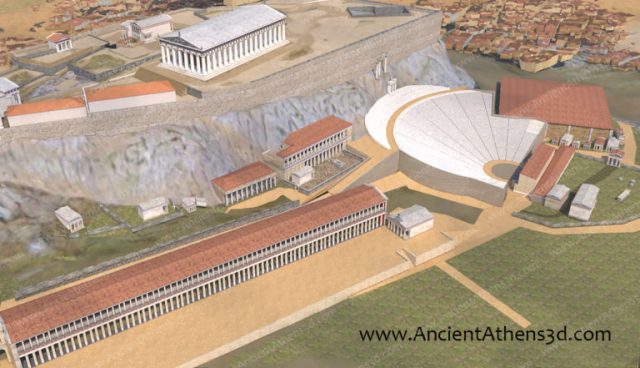 Panoramic view of the Acropolis and its south slope during the Hellenistic Age. In the foreground is the Stoa of Eumenes. Between the stoa and the theatre of Dionysus is the choragic monument of Nikias. 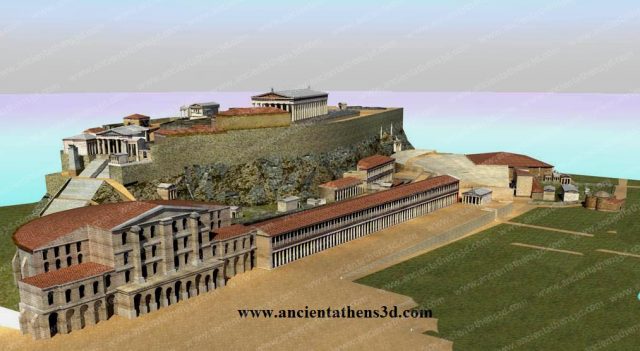 The Acropolis during the Roman period 86BC – 267AD 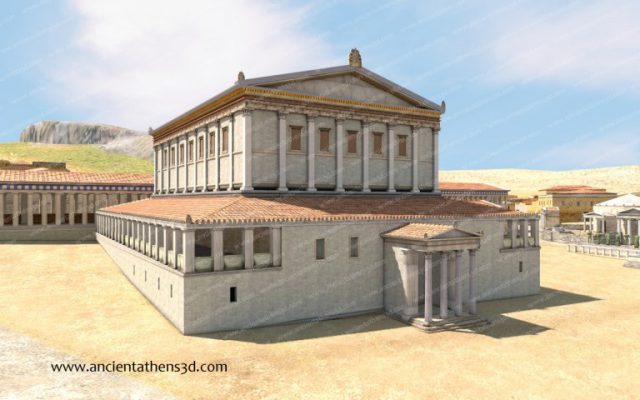 The Odeion of Agrippa in its first phase from the Northeast.

Instead, he calls his work a series of artistic reconstructions, which are photorealistic, but still contain a certain amount of artistic license.  That artistic license is most readily apparent when applied to structures that are so old that very little is actually known about them.  He has also added smaller structures, such as houses, to give a more complete feel to the cityscape as a whole, rather than just focusing on the major landmarks.

Even with those caveats, you can still see the arc of the city’s development over time.  For example, the acropolis is first under development in the Mycenaean era, although the original structure on the site has long been destroyed, and only scant evidence of its outlines remain. During the Archaic period, a large temple of Athena was erected, which was also eventually destroyed, and the Parthenon was built on the same spot during the Classical period.

In addition to the building and development of the city, Tsalkanis also talks about how various conflicts also impacted the evolution of Athens. Structures are built, altered, or discontinued based on current political or military necessities.  During the Roman period, for example, a new period of reconstruction was begun, including the construction of the Library of Hadrian, the temple of Rome, and the Roman Agora.

Beginning in the Medieval period you can see the first signs of the might city’s decline, after it was sacked by the Heruli. Later during the same era, the city began to repair itself, although by the 6th century AD it was frequently raided by a variety of peoples, including the Slavs. Finally, by the late Ottoman period, you can see that the protection the Ottoman’s had extended to the existing landmarks began to crumble, and the Greeks regained control of Athens from the first half of the 19th century.

All in all, Tsulkanis’s work offers a gorgeous and immersive look at the history of one of Europe’s oldest and grandest cities throughout its lengthy evolution.  For serious history buffs, Ancient Athens 3-D is a site that should not be missed.